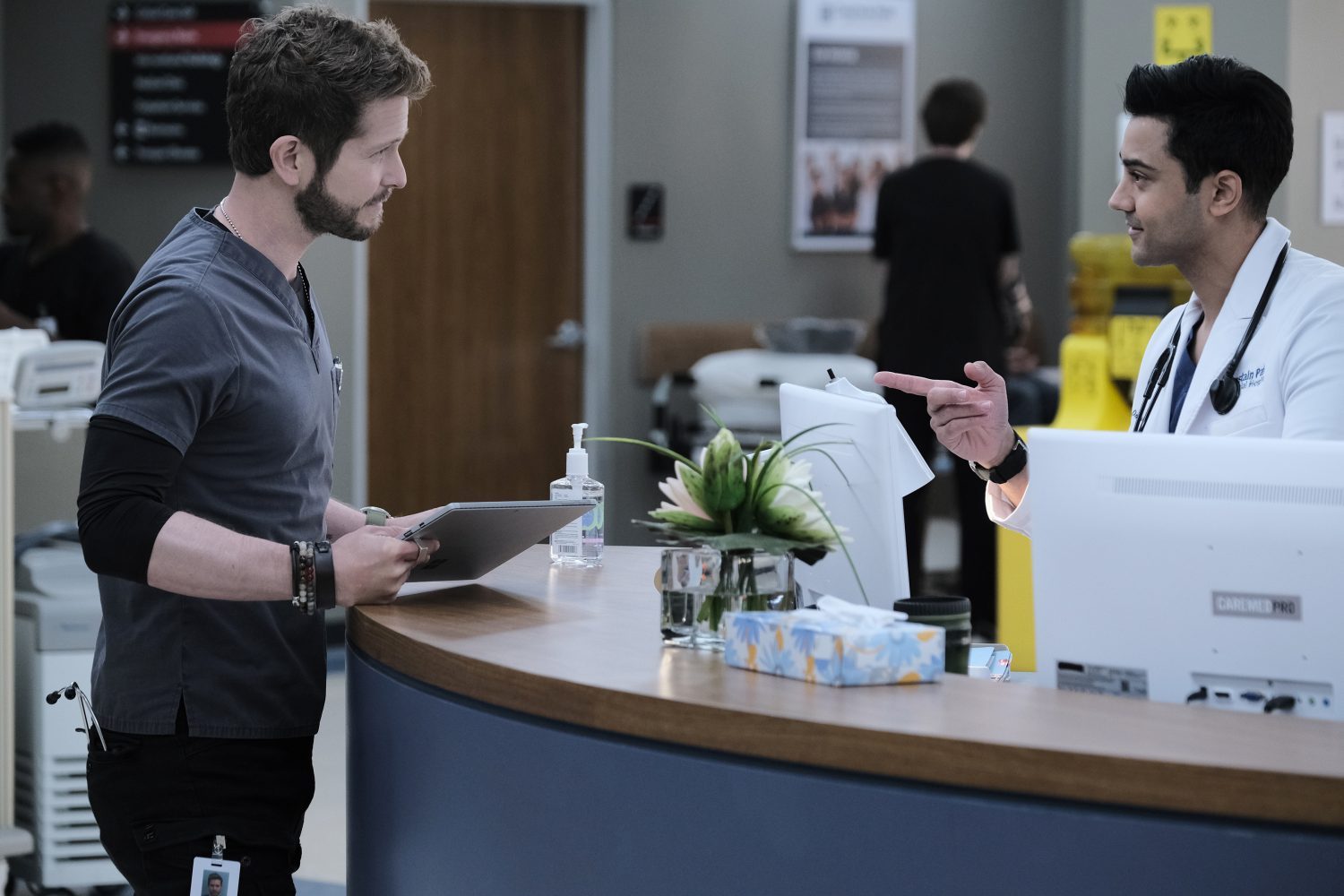 The fourth season of The Resident continued down the path of mind-blowingly amazing with this episode! Conrad and Nic are settling into married life beautifully! Bell and Kit continue to get closer while Bell finds the stepson he hasn’t spoken to in years. Things between Mina and AJ were progressing amazingly. Even though they had a major disagreement. We also got an amazing announcement that had us in tears! So keep reading for The Resident 4×02 review!

We couldn’t blame Conrad for wanting to stay in the love bubble for five more minutes. Honestly, we would be fine with him and Nic staying there all day. We’re still in blissful disbelief that these two are finally married! And then Nic went and blew us away even more at the end of the episode. She told Conrad at the end of the episode that she was pregnant! That’s right! We are getting a CoNic baby and we are totally freaking out! They are both going to be such great parents and we can’t wait to see them in that role. Oh, watching Nic and Conrad together while Nic is pregnant is going to give us heart palpitations. They give us happiness overload!

AJ and Mina. Whoo! We knew that when Mina said their kisses changed nothing, she was full of shit. And the beginning of this episode showed us that was absolutely true. Then we got to hear Mina call AJ her boyfriend and we were beyond happy. Even though they were having a major disagreement. We tried to understand where both of them were coming from. It was great that while the two of them disagreed in a major way about Cain, they didn’t call things between them quits. It was utterly hilarious how casually AJ told Mina his back hurt and he needed a break from sex for a few nights. The fact that they used the number of nights as a bargain was even funnier. We love these two! And we can’t wait to see what happens next in their relationship.

Our hearts were already broken when it came to Devon losing his father. But to see that he was seeing his father everywhere he turned was devastating. Poor Devon. Seeing his father was absolutely affecting Devon when it came to dealing with his patients. And every single time Devon saw his father, our hearts broke a little more for him. We were so glad that he had Conrad there to talk to. Even if it did take a little convincing from Conrad for Devon to open up to him about what was going on. It’s great to see Conrad and Devon back to being best friends. The two of them need each other.

We loved seeing that Chastain put up a memorial for those they lost during the pandemic. Even if we hated that so many were lost. And while we didn’t like seeing Ben struggling so much, it was a bit of karma that Cain’s bad decisions were coming back to haunt the hospital. We definitely haven’t seen the last of Cain. But we are hoping that maybe some of the other decisions he’s made while at Chastain will also come back to haunt him. Because whether or not he gets fired, we do think he needs to see the problems he has been the cause of. Maybe it won’t change anything for him. Or maybe it could be something that put him on the path of redemption. Time will tell.

While it was sad that he felt that way, it was kind of nice to hear Bell admit he didn’t want to end up alone. And that he regretted some of his past choices. Bell’s redemption arc has been an incredible one to watch. Probably one of the best we’ve ever seen. So we hope that he continues on that path by telling Kit how he feels. Especially since it’s so obvious that she’s the one he wants to be with. The two of them are amazing together. Kit calls him out on all his shit. We love that the two of them banter one moment and then offer unwavering support to each other the next. We also loved that Bell was trying to reconnect with his former stepson. And the smile on his face when he was talking about how much fun they used to have together. 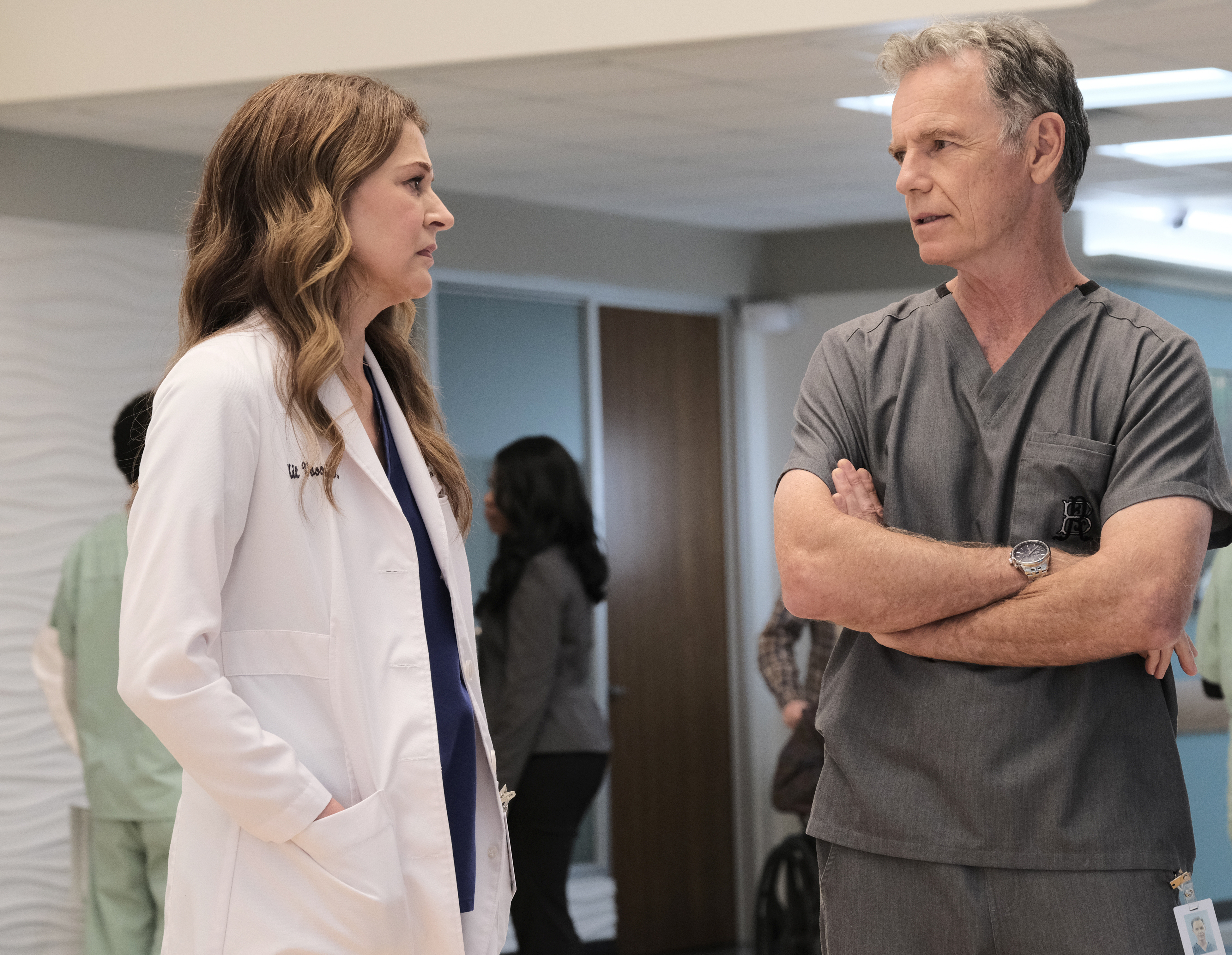 What did you think of The Resident 4×02? Are you glad that Mina and AJ finally seem to be exploring a real relationship? What do you think of the situation with Cain? Did you agree with Mina that Cain needed to have his career ruined? Or did you agree with AJ that it was something that needed to be thought about? What did you think of the way Conrad handled his patient? How do you think Devon seeing visions of his father is going to impact him in future episodes? What did you think about Bell and Kit getting even closer? Will they ever let themselves be together? Find and follow us on Twitter @capeandcastle to let us know all of your The Resident thoughts! Be sure to also check out our site for more articles, podcasts, and more on all things Disney and beyond!