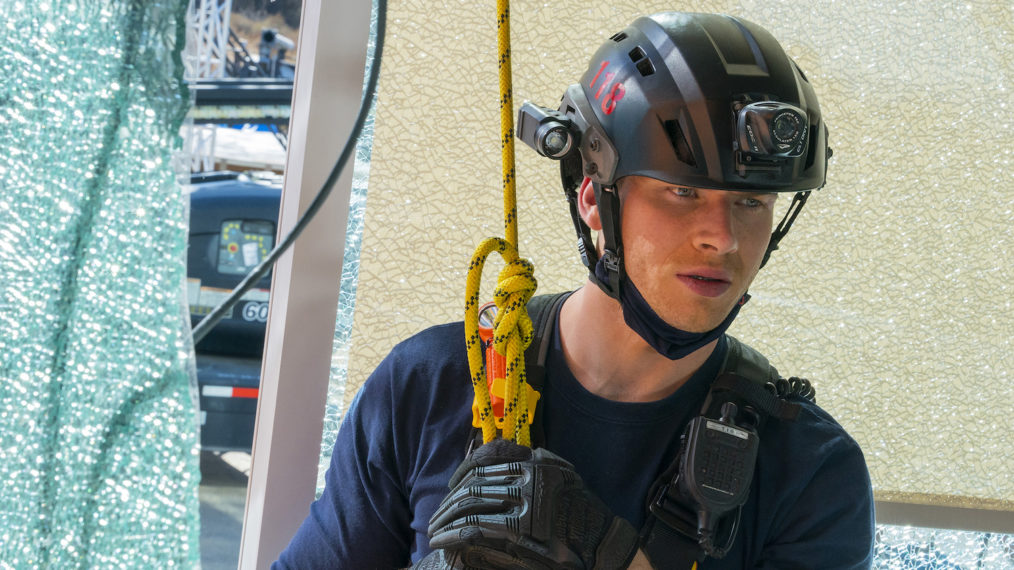 After a long time of waiting, 911 fans eagerly awaited the return of the 118 to their screens. Sure enough, the hit Fox show did not disappoint. The exciting season 4 premiere not only caught us up with the characters and how they have been faring during the craziness of 2020, but it also provided us with some harrowing emergencies. Because of course, what would the show be without dispatch sending our heroes out to save people? Let’s find out what happened in “The New Abnormal.” 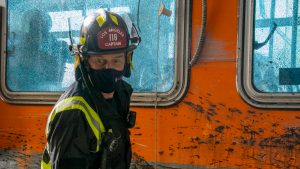 When the show began, we got to see just who was paired up during the pandemic. While Bobby and Athena were, of course, together as she prepared to start work again, Harry was with his dad, Michael, who was also joined by his new boyfriend, the handsome Doctor David who he met at the end of season 3.

In the meantime, the rest of the firefighting team appeared to have been quarantined with Buck at one point. During a zoom call between his sister Maddie and co-worker Chim, he briefly alluded to Hen and Eddie having been with them for some time before going back to their homes. Now we wish we could have seen what it was like for Buck to have roommates, but we are sure flashbacks will abound.

Chimney has been reluctant to go near a pregnant Maddie during the pandemic, so his brother Albert has been with her while he is still with Buck. It’s a tense and confusing time for everyone, and it’s obvious Maddie just wants to enjoy her pregnancy as much as possible with Chim by her side.

New meaning to being thrown under the bus 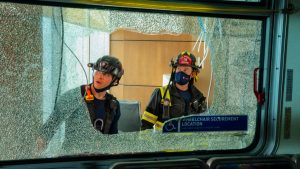 In the meantime, May is getting used to working at dispatch with Maddie. She is supposed to learn the ropes in what should be an easy day. But things quickly take a turn when the dam breaks, causing a massive breach that sends a bus hurtling into a building. While the firefighters work to help the victims, dispatch works to help with the massive amounts of 911 calls.

The 118 is called to the bus scene, where a young man with Aspergers is among the passengers who are injured. Despite the fear and uncertainty after the bus crash, the young man, CJ, is able to help another passenger. CJ is shown to be capable of helping, even when he himself is scared. It was great to see a character like this interacting with those who saw him as more than what he appeared.

This was one of those rescues that had you sitting on the edge of your seat. From Buck lowering himself down the side of the building to hold the bus steady to Bobby comforting CJ, they showed just how brave they were. 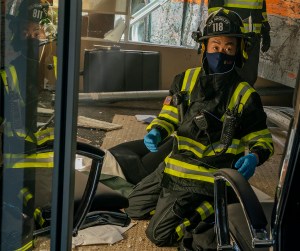 The show also dove into how the pandemic truly impacted some people. In one woman’s case, after losing her husband, she tries to learn to live again in this new abnormal. On the day of the disaster the team is facing, she decides to go bike riding. Unfortunately, when she goes out, she is caught up in the dam breaking. She manages to survive the flood but finds herself stuck in an underground pipe. With Maddie’s encouragement after she is able to call 911, she manages to find a way to show her location.

We have to hand it to this episode. The characters we met truly felt like they were talking for us about the difficult year. From the woman, Janell, taking her anger out on the box preventing her rescue. To another character telling Hen not to ask her to say the year out loud, everyone was a mood.

As for Athena, despite going in to work thinking she would take it easy, she is asked to evacuate people in the Hollywood Hills. She ends up at the home of a woman who is too scared to leave her home. Just as Athena is close to getting her outside, the hill collapses, bringing the house down with them.

An exciting episode of 911 could not have possibly ended any different than on a cliffhanger! Next week, we will get to see exactly what will happen. In addition, we will also see how Athena will handle this unexpected moment on her first day back.

Plus, how will May continue to fare in her work as a dispatcher. Her mom has her reservations, so how will they work around this? We’re excited to see how everything plays out! What did you think of “The New Abnormal?” Let us know in the comments and find us on social media! And if you are also a fan of 9-1-1: Lone Star, make sure to check out our recap of that show as well!