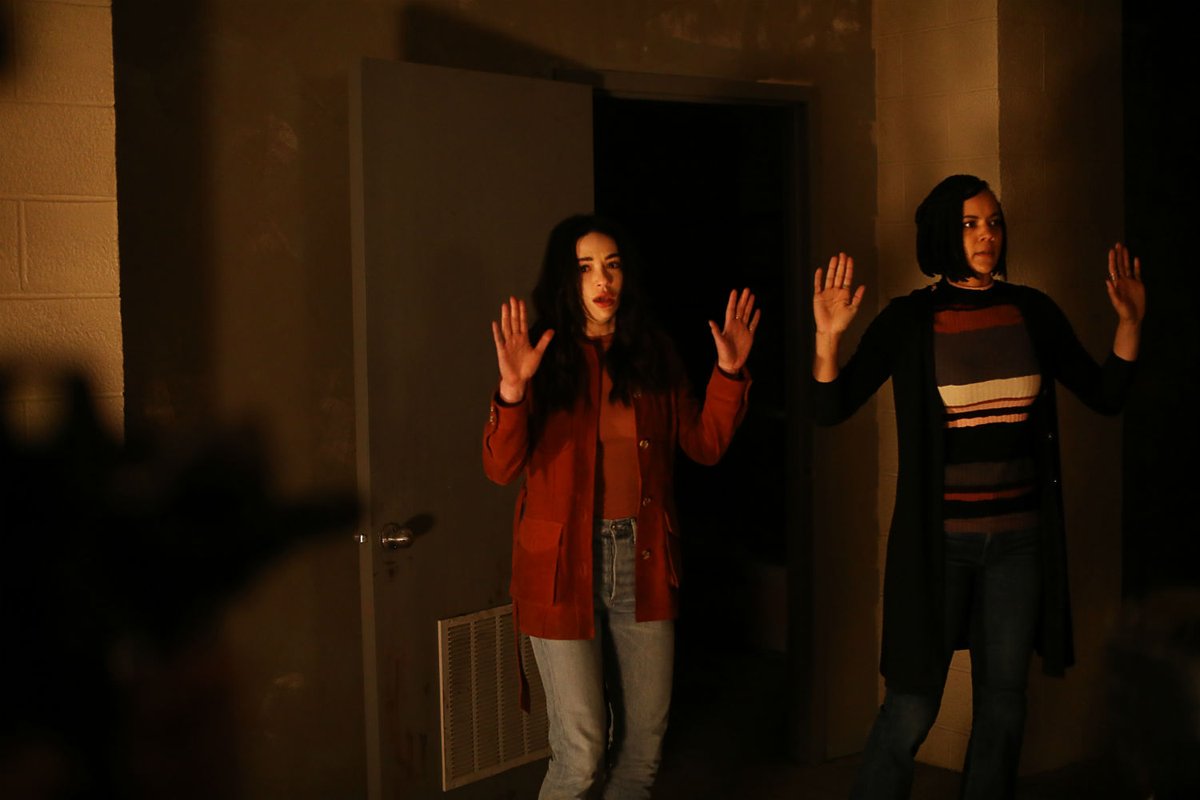 I can’t believe we’re rearing up on the season (series) finale. Just one episode to go. Even when this first came out, I believed it deserved a second season and more beyond that. I still believe that. With all of the buzzing on social media about its time on The CW, it’s apparent I’m not the only one. Now, with the show nearing its finale, will there be more? That’s still a mystery.

Last week on Swamp Thing (review here), Abby tried to search for answers but only found trouble at the CDC. Her resources were yanked out from under her, including her best friend, Harlan. Avery’s fight for survival out in the swamp brought painful memories to the surface and he came face to face with Swamp Thing. Though promises were made, they were also broken.

This week, Abby turned to Liz for help in finding Alec/Swamp Thing. Daniel stepped up to take on the role of the true Blue Devil. Woodrue completely lost himself in his obsession.

Abby (Crystal Reed) surprised Liz (Maria Sten) with her return but it was a short welcome. Immediately, Abby asked for her help with finding and rescuing Swamp Thing/Alec from Woodrue’s clutches. While it seemed crazy to ask, Liz reminded Abby that she will always be at her side. I absolutely love that about Liz. No matter the amount of crazy or danger, like Abby, she will do anything to help people. Those two are like two peas in a pod. Make that three when you add Harlan, and I totally am because I’m not giving up on his being suddenly kidnapped in the dark of the night.

The two wound up visiting Woodrue’s home only to meet his wife whose Alzheimer’s is even worse than before. The determination and teamwork between Abby and Liz really make my feminist heart swoon. Woman power at its finest, you guys. Nothing is standing in their way of finding Swamp Thing and getting to the bottom of the Sunderlands dirty business. However, I wish they would’ve called somebody to stay with Mrs. Woodrue so she wasn’t by herself after they left her house.

After finding and saving Alec/Swamp Thing (Derek Mears), Abby refused to leave his side as they followed him back to the place where he died. Liz couldn’t go on, but Abby remained and saw him bring his own body from the water, proving once and for all that Alec is dead. What remains is this new form of Alec: Swamp Thing. He’ll never return to his human form. While it is heartbreaking for Abby, it also settled her fight to save Alec and focus on the danger Marais is in because of the Rot. Yeah, that’s still out there! 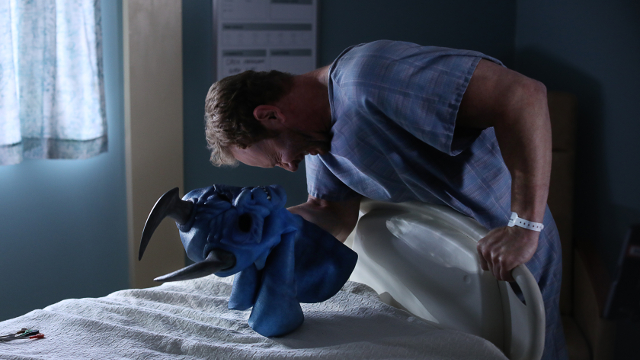 Daniel (Ian Ziering) was still being held in the hospital, but after the Phantom Stranger paid him a visit and showed him a vision of Abby and Liz being shot to death trying to save Swamp Thing/Alec, he wasn’t staying any longer. It was time to officially jump in the fray. This wasn’t just some attempt to get out of Marais either. This was his friends in danger. While it’s been a hot second since he’s been onscreen, I’m thrilled to see him jump back into action.

Getting to see the Blue Devil blaze to life was phenomenal. Granted, Daniel questioned himself but ultimately took it on, determined to get it right this time. Luckily, he made it in time and managed to save Abby and Liz, giving them the chance they needed to get to Swamp Thing/Alec. 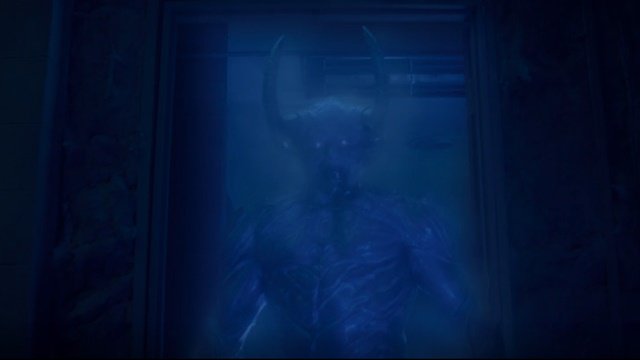 The grand entrance of the Blue Devil was utterly spectacular. From the scene of him taking on a room full of militant mercenaries down to his look with the horns and his devastating, fiery powers. The build-up of Daniel’s character from his backstory to his destiny was more than worthwhile just for this. Sure, the full size, smurf blue demon came out a lot different and a little scarier than his traditional comic self, but coming to life, he looked amazing. Hellish and badass! 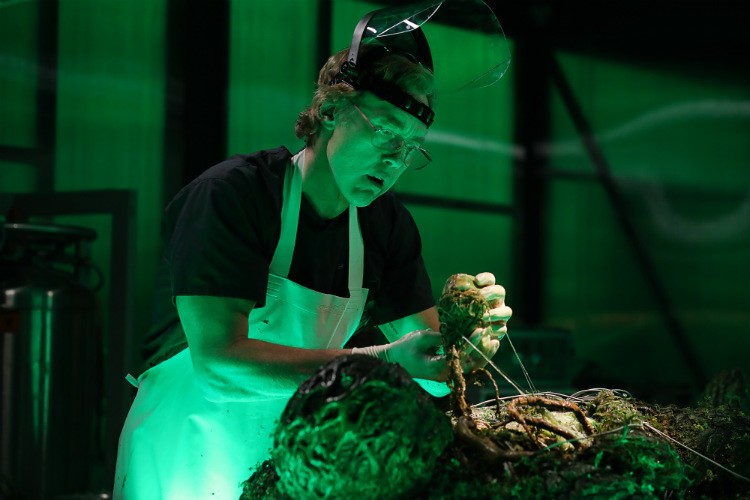 Woodrue’s (Kevin Durand) greatest dream just came true. He found the specimen of a lifetime by capturing Swamp Thing/Alec. With Avery’s (Will Patton) discretion at a secret Sunderland facility, he got the chance to study Swamp Thing as if he weren’t a living thing, but just another test subject that’s a means to advance his career. His intensity about this shows just how much he’s truly forgotten about his wife’s condition, so this is no longer for her.

As he went about the autopsy, he discovered organs inside but pointed out that they don’t do anything. These bits of Swamp Thing are bits that kept him tied to his human self, Alec Holland, from before. It’s the part of Swamp Thing that still believed he could go back to being a man, that a part of him still was. It didn’t move Woodrue to consider stopping his procedure but only encouraged him more. Me, however? My heart broke for him and Abby. He’s still trying to figure out who and what he is and this was brutal.

Avery surprised Maria (Virginia Madsen) this week by getting her sent to the Barclay Institution, a mental hospital, and fully taking over the project with Woodrue, the accelerant, and Swamp Thing. With her committed, that left him in charge of her money too. She definitely needed to be put into a loony bin, but it still left a bad taste in my mouth. Maria, as dastardly and unforgiving as she is, has more of a level head about business and morals than Avery does. Avery needs put away too. Hopefully, he’ll be next! The man is dangerous and has no regard for anybody when it comes to getting something he wants and he wants Swamp Thing.

What did you think of the latest episode? Let’s chat in the comments below and don’t forget to follow us @capeandcastle on Twitter to keep up with other shows you love.