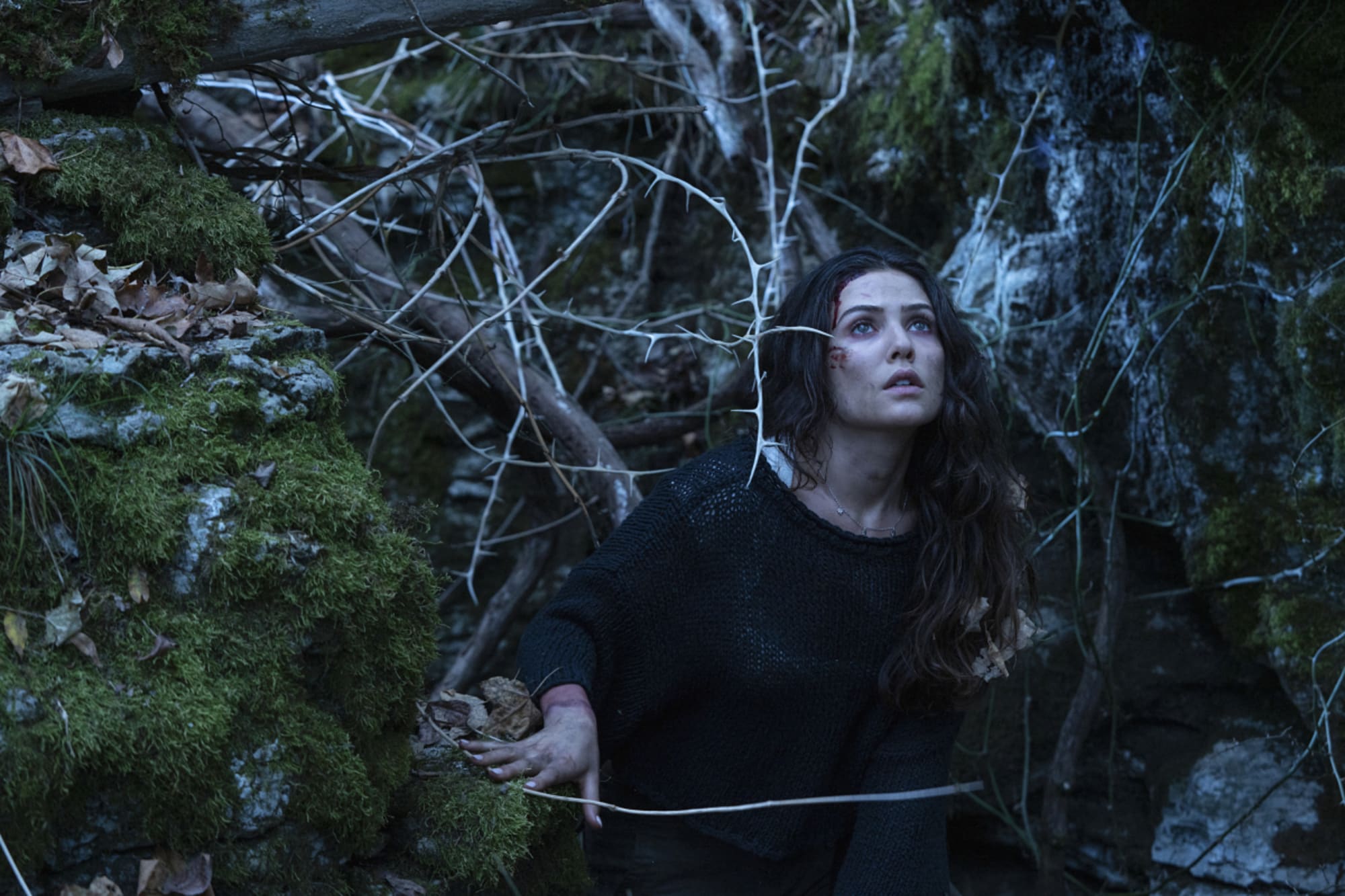 In the last episode of Tell Me A Story (review here), Beau was on the trail of Ash’s car bomber. Simone and Jackson made one hell of an entrance to her family’s charity ball. Maddie’s ex caught Tucker in his lies and it gave Olivia the chance she needed to get away. This week, our tales grow even more intense as they merge together more and more. It’s Olivia’s turn to play games with Tucker.

Tell Me A Story 2×06 via Paul Wesley Chronicles

Sleeping Beauty Gets Away

While Olivia (Danielle Campbell) got away, Brendan (Harry Shum Jr.) got caught by Tucker (Paul Wesley). Brendan was sure that Tucker was screwed. Though in the clutches of Tucker, Brendan learned more about Tucker and his disturbing activities while Tucker also expressed how disgusted he was with Brendan still being in love with Maddie. At this point, I’m pretty sure Tucker is just freaking psycho. I’m not sure he’s at Norman Bates level yet, but he’s getting there. And poor Brendan didn’t even make it through the episode.

Meanwhile, there was a closer look into Olivia’s past relationship with her ex and it was heart-shattering. She didn’t flee just for a new start, but to get free of an abusive relationship that nearly resulted in her death. And now, she’s tied up with Tucker. Still, Olivia is a fighter. So, we weren’t surprised that she not only fought back against her ex but came back for Tucker at the very end of the episode, ready for revenge. What was surprising was the satisfactory look on her face when she killed her ex—in self-defense—showing that Tucker was right. The two of them do have a lot in common. And to be perfectly honest, I am now officially sailing this psychotic ship.

Jackson (Matt Laurie) headed to the Garland estate in his search for Simone (Ashley Madekwe) after only finding her shoe waiting for him after the charity ball. The monumental moment of Cinderella’s tale. Veronica (Garcelle Beauvais), after insult, suggested that he just let her go, but Jackson refused and I couldn’t be prouder. It was Simone’s stepbrother Derek that wound up helping him out. I’m ecstatic that at least one family member came to their senses about this whole situation. While Jackson continued his search, Derek followed his other brother, looking for answers. A confrontation between the two hinted at a darker and possibly explosive side of Derek. 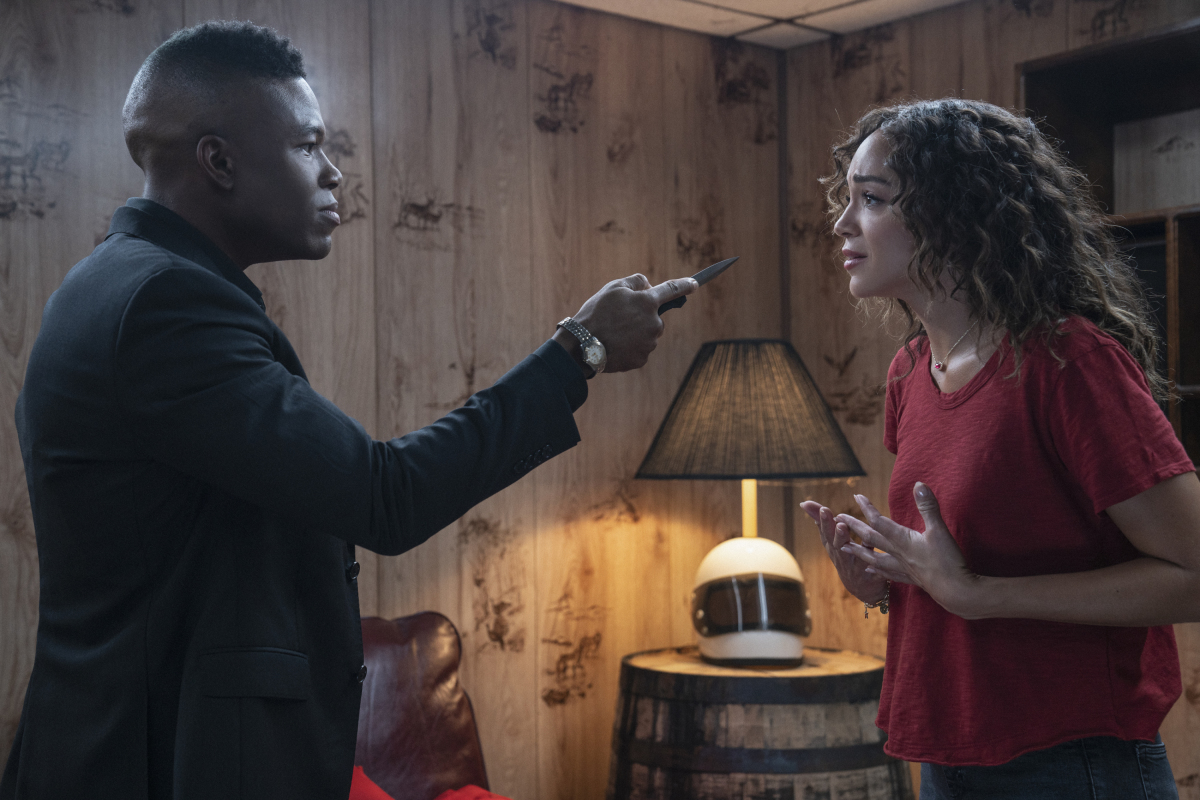 Elsewhere, Simone worked on getting her MacGyver on, trying to escape the room Ron trapped her in at one of the brewery’s factories. His sneering in her face and telling her how he got in contact with the people on her last job, people who wanted her dead, put some real fear in her. Personally, this portion of the tale is trying so hard to make me believe that Ron is the villain behind all of this, but I’m not falling for this misdirection. It’s too obvious!

Simone’s strength and resolve really had me loving this arc this week. She didn’t need anybody to save her, though, in all honesty, it doesn’t hurt to have help. So, it was great when Jackson showed up to help get her out of a tight spot with an old friend she owed money to,

The growing tension of this arc has really drawn me in. Not typically one for mysteries, I am dying to learn who killed Frank Garland. Simone deserves this resolution.

Beast Gives Everything for Beauty

Ash (Natalie Alyn Lind) came to Beau’s (Eka Darville) aid at the hospital as his father was in critical surgery. I was able to breathe easy the second it was revealed he was stable. The parallels to the classic tales are the strongest with this arc for sure. Beauty’s love for her father from the tale is exactly like that of Beau for his father. Plus, there’s the obvious parallel with Beau’s name compared to that of the famous Disney princess. More so, the way Ash grows closer to him with each episode, opening up little by little, much like the cursed creature of the tale.

Still, his determination to find Ash’s car bomber really pushed him beyond the brink, but luckily he had an old cop-friend watching his back. Still,

Tell Me A Story 2×06 via Father Son Holy Gore

Ash and Maddie’s (Odette Annable) talk about happily ever afters grew sad and reminded the audience that Ash still doesn’t view herself as worthy of affection nor did she think she would get a happy ending. She made a valid point that not everybody gets a happy ever after. This show has proven that in the past. However, I’m still holding out for her.

So, theory time. Every once in a while, I get a hankering for one of those, especially when the opportunity is presented and this episode did just that. With Ash and Beau’s arc, I can’t help but wonder if it was her own mother that had Ash’s car bombed. Hear me out, it happened on Ash’s big debut night and why not make a big spectacle of Ash survived a close call with death, except it goes awry because she nearly killed her own daughter?

On another note, Roy definitely isn’t the one who killed Frank Garland. It’s just too easy. However, what if it was the other brother, Derek? He’s got a habit of holding things in and that’s never good. Maybe he snapped after dealing with so much?

One thin is for sure about this show. It’s twisted tales really keep you guessing. Definitely appreciative.

What did you think of the latest episode of TMAS? Let’s chat about it in the comments below and don’t forget to follow us @capeandcastle on Twitter to keep up with other shows

Tags:
Review, Season 2, Tell Me A Story, The CW
previous article next article