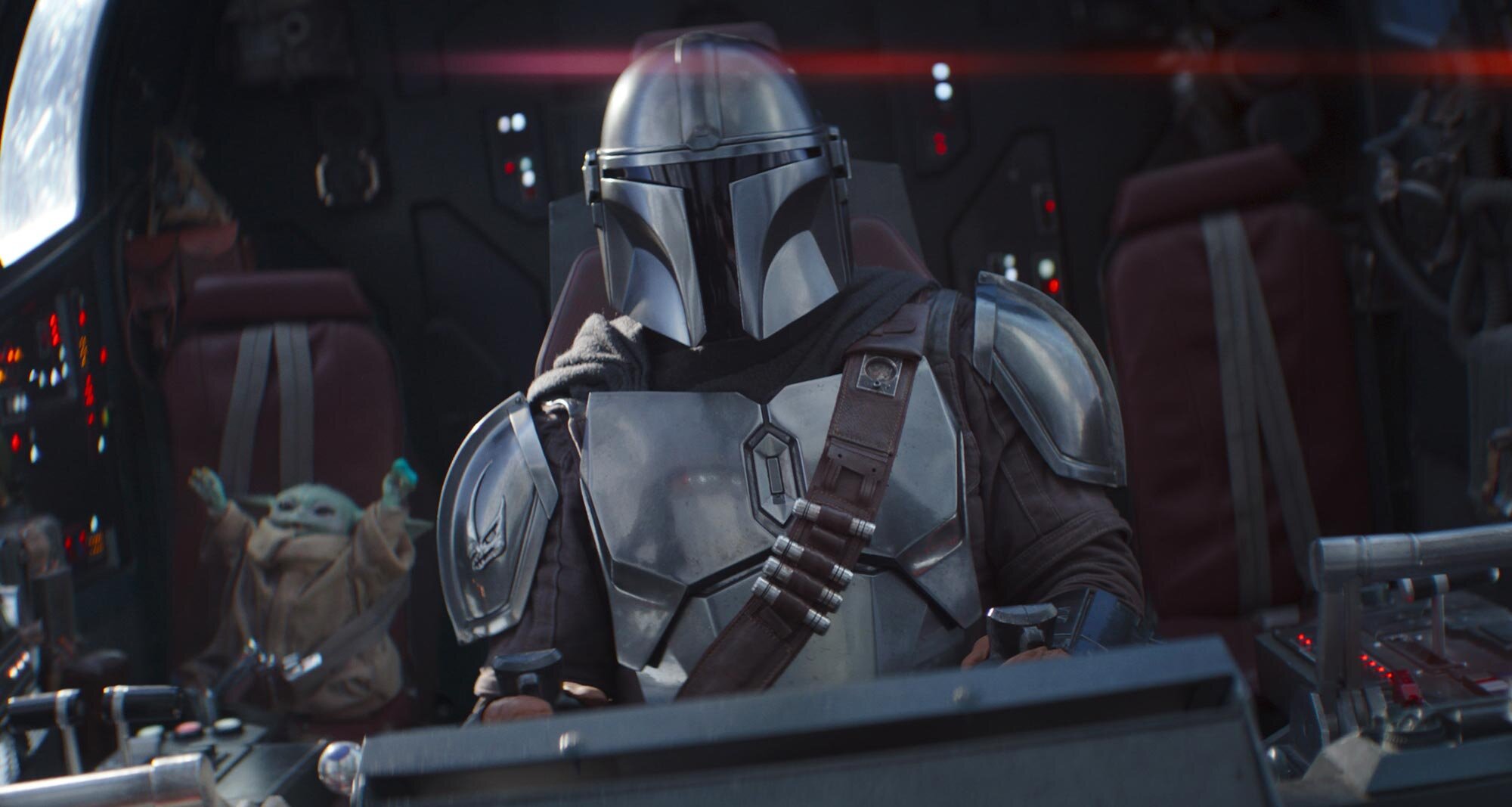 With only three episodes remaining to wrap up season two’s storyline of The Mandalorian, the plot is thicker than ever before! After paying a visit to Ahsoka Tano last week, the Jedi quests Mando to guide Grogu to the Temple on the planet Tython. Follow along as we breakdown chapter 14, arguably the most stress-inducing episode of season two, as familiar friends and foes enter the chat!

Whose feet were those approaching Fennec Shand’s lifeless body at the end of chapter 5? It appears that we are about to find out, as the recap revisits that scene, as well as Ahsoka Tano’s instructions for Mando and Grogu to journey to the planet Tython. Additionally, we see Moff Gideon receiving intel that Mando is still in possession of Grogu and that their source placed a tracking beacon on the Razor Crest.

Chapter 14 opens with Mando testing Grogu’s Force abilities with the Jedi apprentice’s favorite toy—a joystick knob. We’re starting to get the feeling that Mando is going to go through some serious empty nester blues after finding Grogu a new home. Overwhelmed with emotion, Mando conveys to Grogu that he is special but hopes that the child will understand that he needs to be trained by someone else and returned to his kind.

After the duo lands on Tython, Mando uses his jetpack to rocket the duo to the seeing stone, which Ahsoka said has strong connections with the Force. Moments after Mando rests Grogu on the rock, a ship enters the atmosphere, sending the gunslinger into a panic. However, Grogu begins his meditation session while Mando is gawking at the sky, and the child creates an impenetrable blue forcefield around the stone. Leaving the stone to buy Grogu some time, Mando descends from the Jedi Temple to scour the field, where Boba Fett opens fire and approaches him. Boba demands the armor that our protagonist received from Cobb Vanth on Tatooine in chapter 9, but Mando refuses, as the Jango Fett clone has denounced all Creed and societal associations. It turns out that the feet in chapter 5 belonged to Boba Fett, who brought a familiar sharpshooter with a locked scope ready to unload on Grogu—Fennec Shand.

However, the trio agrees to drop their weapons, opting for a peaceful discussion instead of bloodshed. Fennec Shand explains her mysterious resurrection and reveals a portion of her stomach, which is composed of metal parts. Even though Boba Fett does not follow the Mandalorian Creed, he insists that the armor rightfully belongs to him, as it was his father’s. In exchange, Boba ensures the safety of Grogu. Before Mando has time to respond, an Imperial ship lands on the planet. Both sides hightail it as Mando jettisons onto the stone to retrieve Grogu and attempts to break up his Force meditation session, but flies back into a state of unconsciousness after trying to penetrate the forcefield.

In the meantime, Mando and Fennec open fire on a battalion of stormtroopers approaching the seeing stone. Boba Fett’s weapon turns out to be one of the coolest in the Star Wars universe, raking through the stormtroopers without blaster fire, earning the same elite status as Rapunzel’s frying pan from Tangled. Another Imperial ship of reinforcements descends on Tython as Mando regains consciousness, and the protagonist joins the duo of Tatooine left-behinds in their fight. The Imperial army quickly retreats as Boba Fett dons his new armor and blows the Imperial ships out of the sky with a rocket in his jetpack.

Unfortunately for Mando, Moff Gideon’s light cruiser delivers a direct hit on the Razor Crest, blowing it to oblivion. Gideon employs the dark troopers on the planet, and they surround Grogu, who lies unconscious on the seeing stone, exhausted from his meditation. The dark troopers retrieve Grogu and return for the ship right as Mando and Fennec approach the scene, leaving the infant’s fate in the hands of Boba, who loosely follows Gideon in the air and emphatically declares that the Empire is back.

Mando explores the ruins of the Razor Crest in solemn defeat and discovers Grogu’s favorite joystick knob in the ashes—placing it in his pocket—as well as his Beskar spear. Showing Mando his chain code encoded in his armor for 25 years, we learn to Boba’s father, Jango, was a foundling and fought in the Mandalorian Civil Wars. Mando is at peace with Boba reclaiming the armor, but Boba and Fennec are not, as the two agree they are in Mando’s debt until they follow through with ensuring Grogu’s safety. The trio returns to Nevarro, where Mando meets up with Cara Dune, the new Marshal of the New Republic. The gunslinger asks Cara to locate an Ex-Imperial sharpshooter with the last name Mayfeld, who Mando wants to spring to help him find Moff Gideon’s light cruiser.

The final scene takes us to that very ship, where Moff Gideon is holding Grogu captive. Gideon enters Grogu’s chamber while the child is using the Force to take out a pair of stormtrooper guards. Impressed—but not surprised—by Grogu’s ability, the Imperial officer unsheathes the darksaber to half threaten and half showoff his weapon to Grogu. After show and tell is over, Gideon commands his stormtroopers to anesthetize Grogu, bind him in shackles and to send an encrypted message to Dr. Pershing to inform him of the retrieval of their donor.

Make sure to look out for more of our content on The Mandalorian soon! Want to refresh your memory on season one? Click here for chapter recaps of season one of The Mandalorian. What were your favorite moments in chapter 14? Let us know @capeandcastle on Twitter! Be sure to check out our site for articles on all things Disney, Marvel, Star Wars and more!