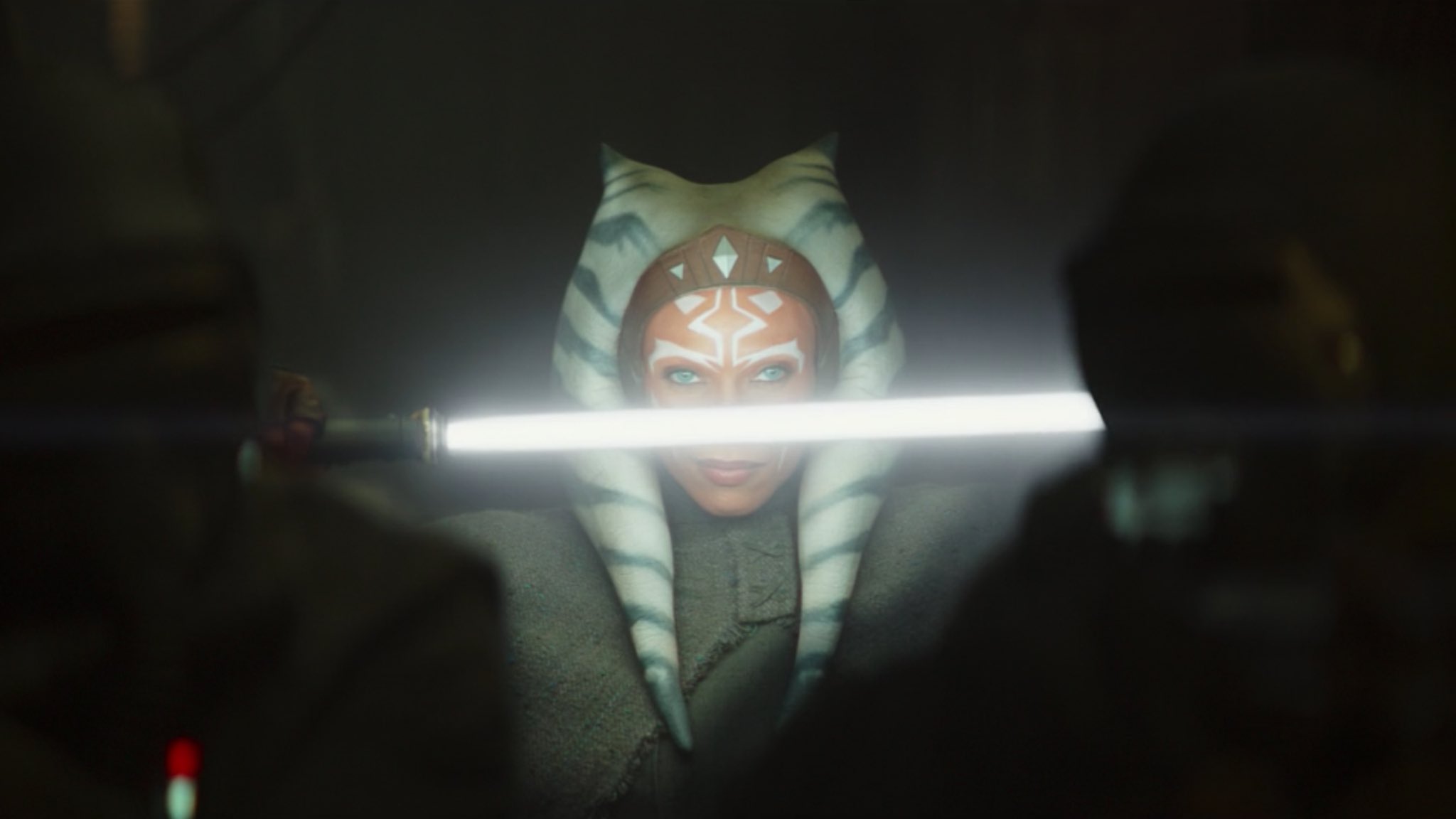 It’s the chapter we’ve all been waiting for! Dave Filoni is back in the director’s chair, reviving his role from The Clone Wars of bringing us quality Ahsoka Tano content. Follow along as we break down all the action in chapter 13 of The Mandalorian, as Mando encounters the Jedi for the first time!

In the recap, Mando explains the Child’s uncanny Force ability to the Armorer, and we revisit his mission with Bo-Katan on the moon Trask, who instructs the protagonist to find Ahsoka Tano, a Jedi on Corvus.

The episode opens with Ahsoka Tano using her lightsabers and Force ability to take out scout guards in a forest, under the guise of a spooky mist that allows her to hide in plain sight. Ahsoka approaches a tyrannical Magistrate—Morgan Elsbether—ascended on the town gate, who is oppressing the citizens she rules. Ahsoka threatens to attack in one day if the governess does not surrender and relinquish a piece of information she needs, and vanishes into the mist.

Back on the Razor Crest, Mando prepares the landing sequence for Corvus while the Child eyes the joystick knob he fiddled with in season one and uses the Force to twist it off. Leaving the Crest, Mando and the Child head out to peruse the town, hoping to pick up a lead. The gunslinger approaches some citizens to glean some information, but scout guards halt him and escort him to the Magistrate.

In her courtyard, the Magistrate commissions Mando to kill the Jedi that plagues her village and threatens her rule. In return, the Magistrate offers Mando a staff crafted of pure Beskar. Lang, the Magistrate’s second in command, leads Mando and the Child to the edge of the forest, and he begins his game of hide-and-seek. Mando sets the Child down to survey the area, but while the protagonist is scoping, Ahsoka attacks. Mando’s Beskar protects him from her lightsaber strikes, and he explains that Bo-Katan sent him before further fighting can ensue.

After examining the Child, Ahsoka explains that she can understand the Child—who she calls Grogu—by reading his thoughts. The Jedi also reveals that the Jedi raised and trained Grogue on the temple in Coruscant. However, when the Empire rose to power at the end of the Clone Wars, someone stole the Grogu. She elaborates further about Grogue’s abilities, attributing them to the Force, an energy field created by all living things.

Deciding to evaluate Grogu the next day, Ahsoka tests the Child’s foundational Jedi skills, but he is unable to pass the first Force-catch challenge. Using the Force to read her padawan’s feelings, she senses fear in Grogu, who has hidden his abilities to survive over the years. Trying another strategy, Ahsoka upgrades Mando’s role in the session from spectator to coach, instructing him to command Grogu to lift the stone from his hand.

Quickly giving up and blaming their failure on Grogu’s stubbornness, Ahsoka encourages Mando to connect with the infant. Mando takes her advice and swaps out the stone the joystick knob Grogu took from the ship the day before—and Grogu succeeds. Declaring she cannot train him, Ahsoka awards Mando the role as Grogu’s Jedi Master since the Child’s strong attachment to the protagonist makes him vulnerable to his fear and anger. Vaguely hinting at Anakin, Ahsoka warns that her training might only escalate the feelings that could potentially lead him down a dark path, noting that it would more favorable to let Grogue’s abilities fade.

After the session, Mando promises to join Ahsoka in her fight to end the tyrannical rule of the Magistrate if she will train Grogu, and the duo heads to the town gate to lay siege on the scout guards. Ahsoka infiltrates the village and approaches the Magistrate, who is calmly awaiting her. The Jedi tosses Mando’s pauldron on the ground, staging the bounty hunter’s failure, and demands to know who the Magistrate’s master is. Elsbeth orders blaster fire on Ahsoka and the execution of the prisoners, but Mando swoops in, rescuing the captives from their cruel fate and leading the citizens to shelter.

Leaving Mando to deal with Lang, Ahsoka approaches the Magistrate in her courtyard and unsheathes her lightsabers. The Magistrate defends with her Beskar staff and the two spar. Elsbeth successfully knocks one of Ahsoka’s lightsabers into the water, evening the fight on paper, but the move leads to her downfall as Ahsoka’s rage fuels her skills, and she rids the Magistrate of her staff. In the meantime, Mando participates in a standoff with Lang, in which the gunslinger reigns victorious. Back to Ahsoka, the Jedi demands to know where Grand Admiral Thrawn is, holding a lightsaber to the Magistrate’s throat at the end of their fight.

The Mandalorian and the Jedi walk through the town triumphant, and Ahsoka presents the Beskar staff to Mando. Even though Mando didn’t finish the job, Ahsoka ensures that the weapon belongs to a Mandalorian. Mando returns to the Crest, where he finds Grogu slumbering soundly in his cot. Waking up Grogu to say goodbye, Ahsoka goes back on her deal with Mando, insisting she cannot train the Child and suggests that he finds the ancient ruins of the temple that has Force implications on the planet Tython. She instructs Mando to place Grogu on the seeing stone at the top of the mountain, where the infant will choose his path and a Jedi might sense his presence and come searching for him. Ahsoka smiles on as Mando and Grogue ascend into the atmosphere, the beginning of their next quest.

Make sure to look out for more of our content on The Mandalorian soon! Want to refresh your memory on other episodes? Click here for chapter recaps of seasons one and two of The Mandalorian. What were your favorite moments in chapter 13? Let us know @capeandcastle on Twitter! Be sure to check out our site for articles on all things Disney, Marvel, Star Wars and more!