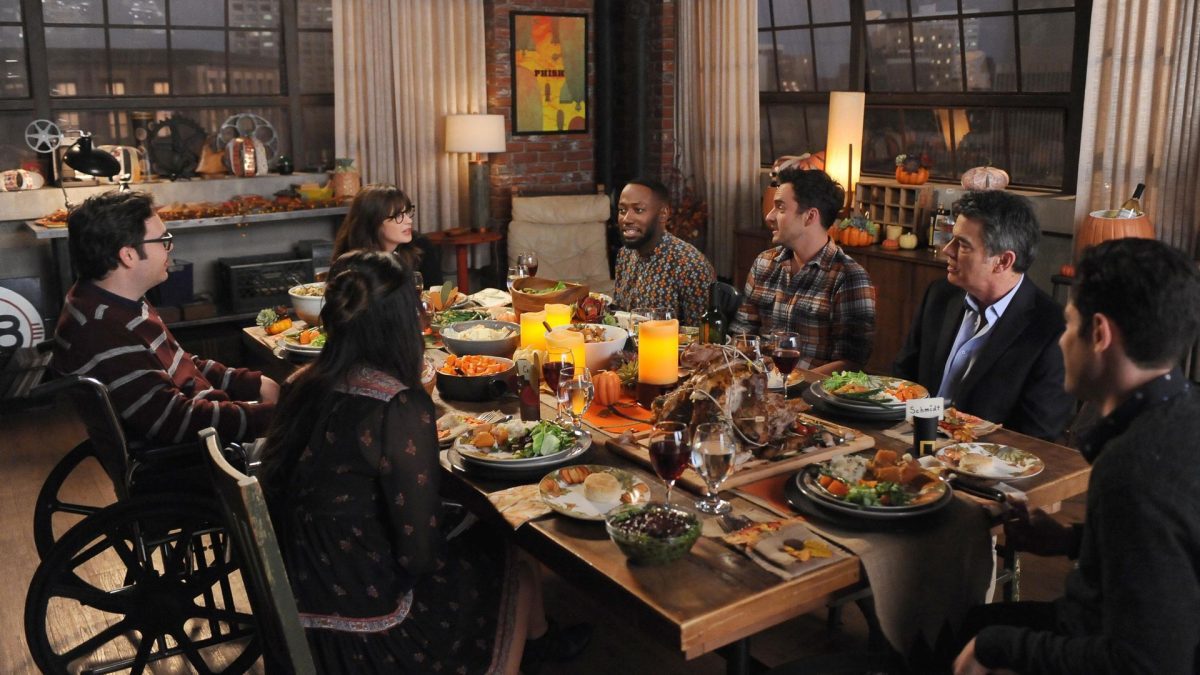 When a half-hour comedy show does a holiday-themed episode year after year, you know you’re in for something special. For New Girl, the chosen holiday was Thanksgiving. For five episodes across seven seasons, the gang gathered together for one disastrous Thanksgiving after another. Read on as we look back at these memorable episodes.

In the first season, Jess invites a date over for Thanksgiving. Jess’s plans to woo Paul over a homecooked meal throws a wrench in the guys’ plans for ‘Dudesgiving’. Football followed by Black Friday at Best Buy. Jess convinces Schmidt to help her cook by inviting Cece to join them. There’s awkwardness between Nick and Paul despite Jess’s desire for them to be friends. Winston and Paul easily bond. Cece and Schmidt butt heads in the kitchen. Add in a frozen turkey exploding from a dryer in an attempt to thaw it quickly, and the discovery of a dead body when they move the dinner to the neighbors’ place to escape the smoke. And you have a very memorable first holiday episode for New Girl. In the end, the gang gathers at Best Buy for Black Friday to buy a new dryer. Plus, Paul saves the day with turkey subs.

What’s a television holiday episode without some visiting relatives? The second season of New Girl has Jamie Lee Curtis and Rob Reiner guest as Jess’ divorced parents! And Rob Riggle as Schmidt’s cousin, who is also known as Schmidt.

In one storyline, Winston taunts the Schmidt cousins into a competition of manliness to prove who was the one true Schmidt. And the winner earns the name. From feats of strength to cooking abilities, the cousins battle it out in increasingly ridiculous contests. In the end, Schmidt’s cousin admits he misses his wife who just left him and the cousins have a genuine moment of connection. 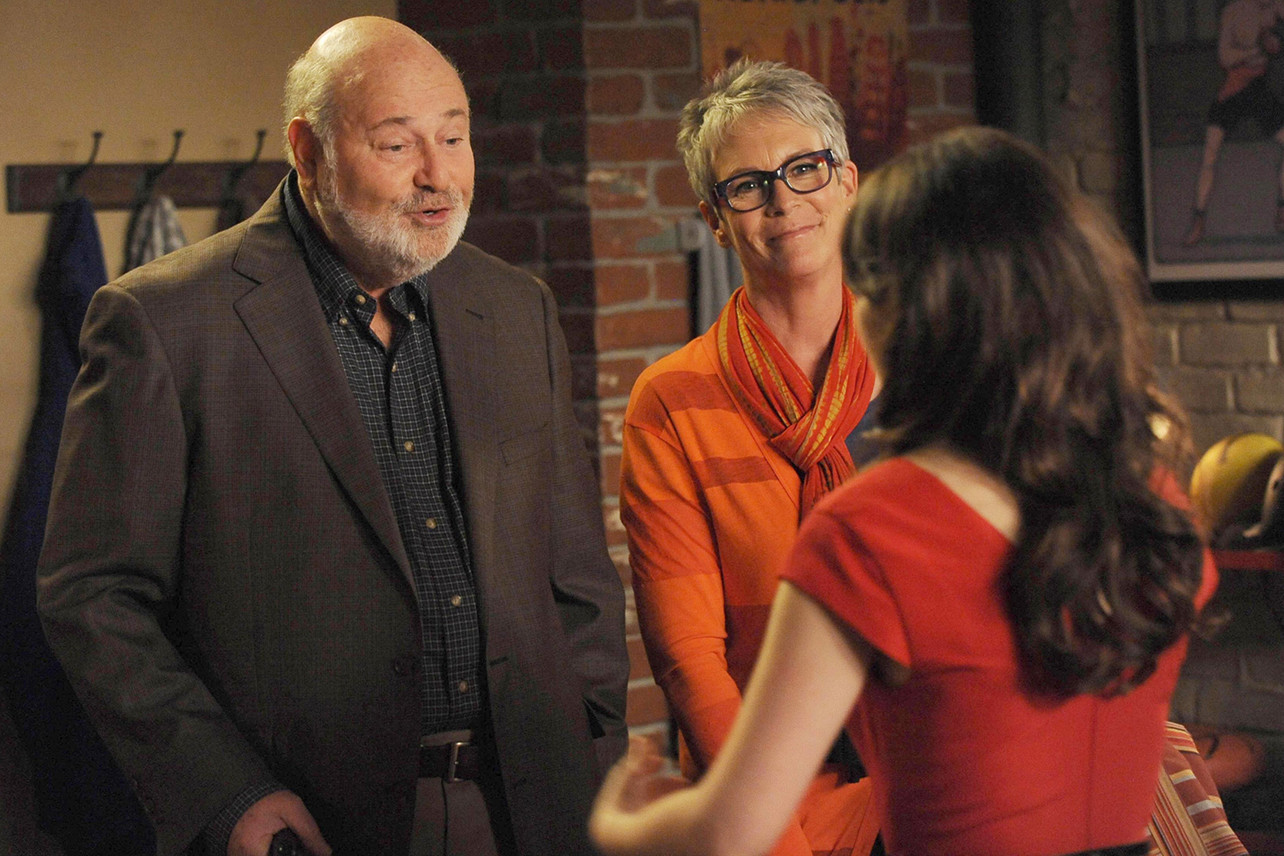 In the main storyline, Jess employs a parent trap scheme to reconnect her parents. Something she’s done repeatedly through the years, as flashbacks illustrate. Cece helps her give Joan a makeover, while Nick bonds with Bob. At Jess’s urging, Nick flirts with a newly made-up Joan to make Bob jealous, leading to a kitchen mishap that requires Bob to get cleaned up. Joan helps him get cleaned up in the bathroom, and moments later Jess spies her divorced parents making out. Over dinner, Jess lets on that she knows her parents are back together. When they deny it, tell her it was only a hookup, and they’ll never reunite, Jess angrily grabs the turkey and throws it in the sink. At the very end of the episode, her parents leave together in the elevator and Joan jumps into Bob’s arms as the doors close on them, hooking up yet again.

By the third New Girl Thanksgiving, Coach is back, Jess and Nick are officially dating, and Cece and Schmidt have broken up. When Coach teases Nick about disappearing into his relationship, Nick decides the gang should go camping for Thanksgiving so they can prove their manliness and survival skills.

Nick brings only beer to the outing, convinced they should hunt and gather their meal. As Nick, Coach, and Schmidt attempt to do just that, Winston, Cece and Jess sneak off to a country store to buy foods that could be found in the forest. A sticker on an apple is the ultimate giveaway for Nick, as he insists they eat the (dead) fish he caught (found, already dead). In a show of support, Jess devours the diseased fish, not knowing of its origins. She hallucinates, wanders through the forest, and falls into a hole Nick had covered in hopes of catching a bear. The episode ends with the gang gathered around Jess’s hospital bed, eating food they gathered from the hospital vending machines.

The first disaster-free Thanksgiving for the New Girl crew is dubbed ‘Bangsgiving’ by Schmidt. All six of the friends are single at the same time, so they draw names out of a hat to bring dates for each other. Jess brings a co-worker from school (a lunch lady) for Winston. Winston brings a police academy friend for Coach. Coach brings Jess’s work crush for her. Each of them are reluctant to accept their matches at first. Winston has traumatic memories of lunch ladies, Coach is intimidated by women who are stronger than him, and Jess is forbidden to date her co-worker. However, once they are honest with their dates, all of these matches work out successfully, if only for one night in a few cases. 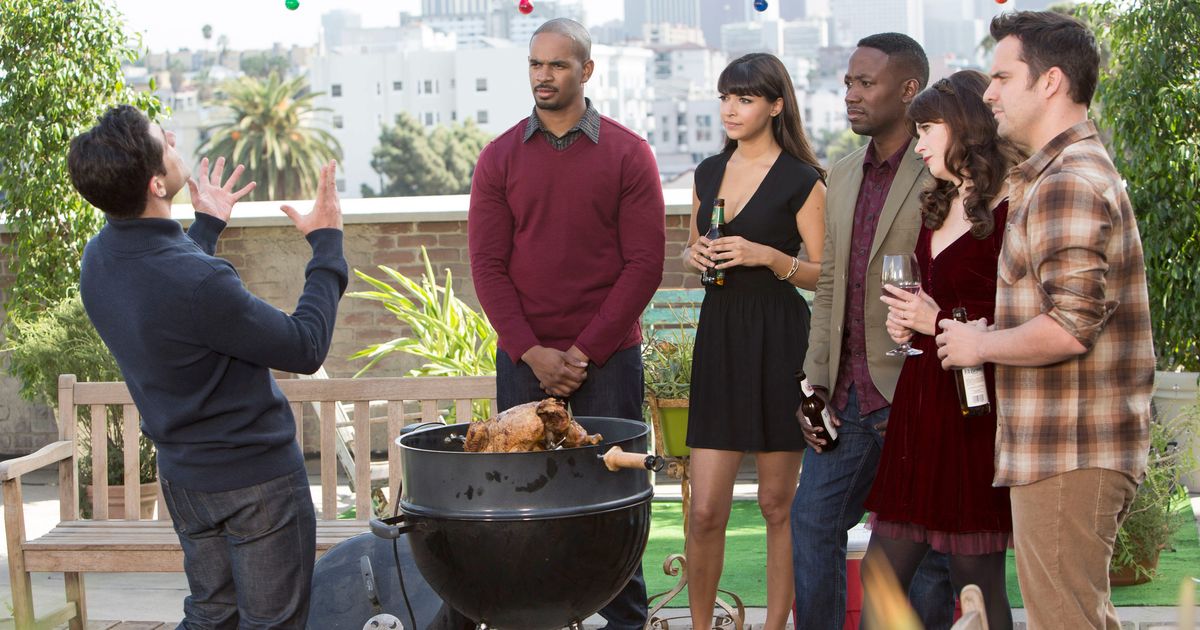 Schmidt and Cece draw each others names. Cece invites a specific woman Schmidt requested, and Schmidt invites a man that never shows up. Schmidt’s date does not work out due to her previously unknown anti-Semitic views. Cece’s date does eventually show up very late, just as she and Schmidt are bonding. But Cece shuts the door in his face to spend the evening drinking and playing a board game with Schmidt. Nick draws his own name and brings his older friend Tran. Tran gets super drunk and his granddaughter shows up to drive him home. Nick instantly connects with the granddaughter and they exchange numbers as the episode draws to a close.

In season six, the gang has their last Thanksgiving in the loft, with plans to move the tradition to newly married Cece and Schmidt’s home in future years. Schmidt has high hopes of having a wonderful day with his estranged father, who only recently re-entered his life. Cece unsuccessfully tries to lower his expectations. Gavin, Schmidt’s father, shows up crying over his girlfriend breaking up with him. When Schmidt attempts to intervene and win her back for him, he learns his father was cheating with 5 other women, and is once again disappointed in the man. Gavin apologizes to Schmidt for many things, and Schmidt finally accepts him for the screwed up person he is.

The other significant storyline involves Jess trying to kindly let a very injured Robbie know she’s not interested in him romantically, however when he stands up for her with Gavin, she sees something in him she hadn’t before and they decide to give their (ultimately doomed) relationship a shot. 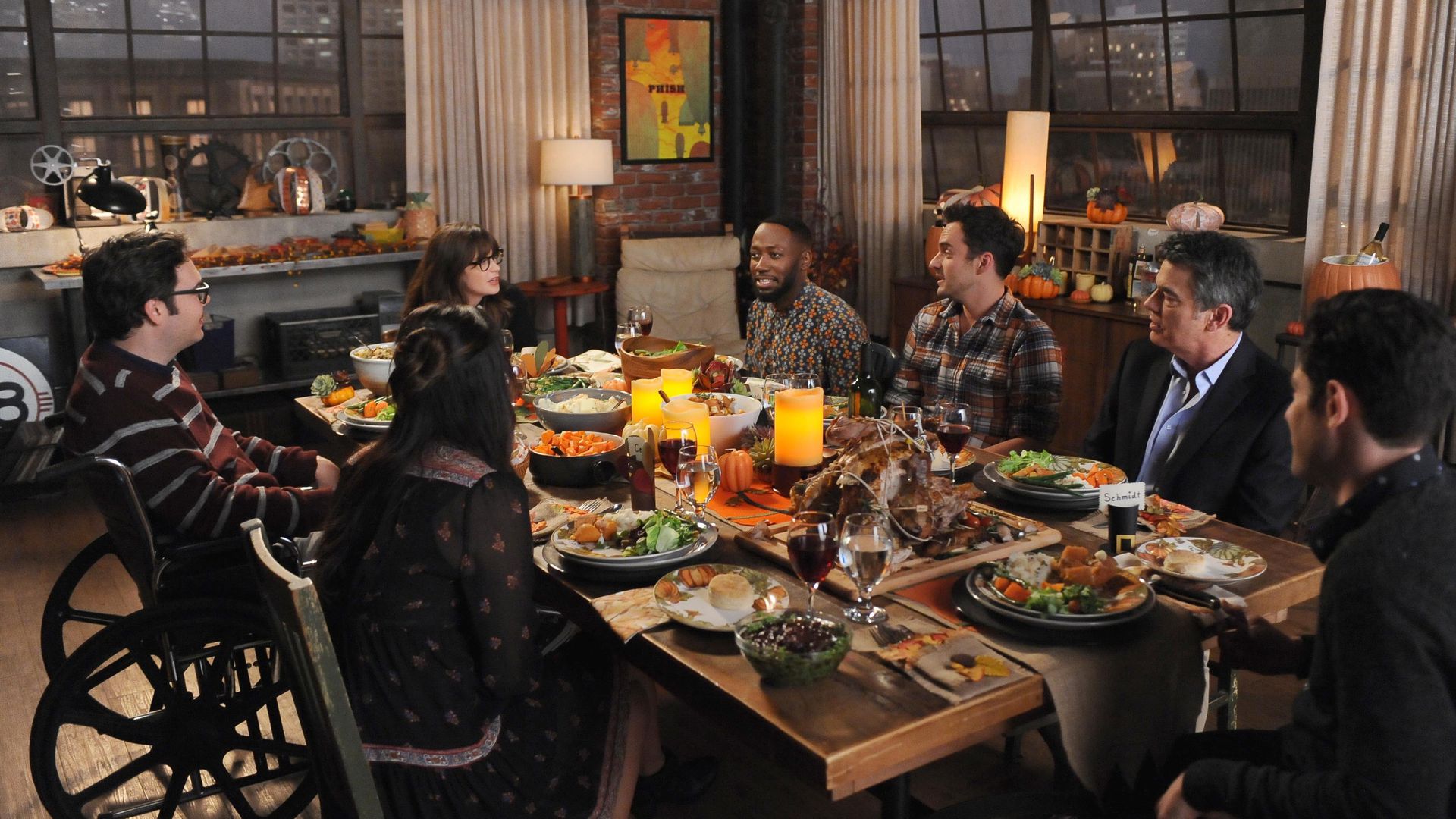 In a commotion earlier in the episode, Robbie fell to the floor after standing from his wheelchair, the turkey was knocked to the floor, then thrown against the wall by Nick when he burned himself trying to pick it up. As the episode comes to a close, the gang gathers around the battered turkey and reminisces about all of their disastrous past Thanksgivings. In a fun nod to the fact that they skipped a holiday episode the previous season due to not airing until January, as they reminisce it is revealed that last year they “all accidentally took peyote”.

New Girl aired for seven seasons on Fox before leaving the airwaves in 2018. The entire series is available on Netflix. Do you love New Girl as much as we do? Which Thanksgiving episode is your favorite? Which disaster made you laugh the hardest?  Find and follow us on Twitter @capeandcastle to share all of your thoughts on New Girl, Thanksgiving, and more! Be sure to also check out our site for more articles on all things Disney and beyond!