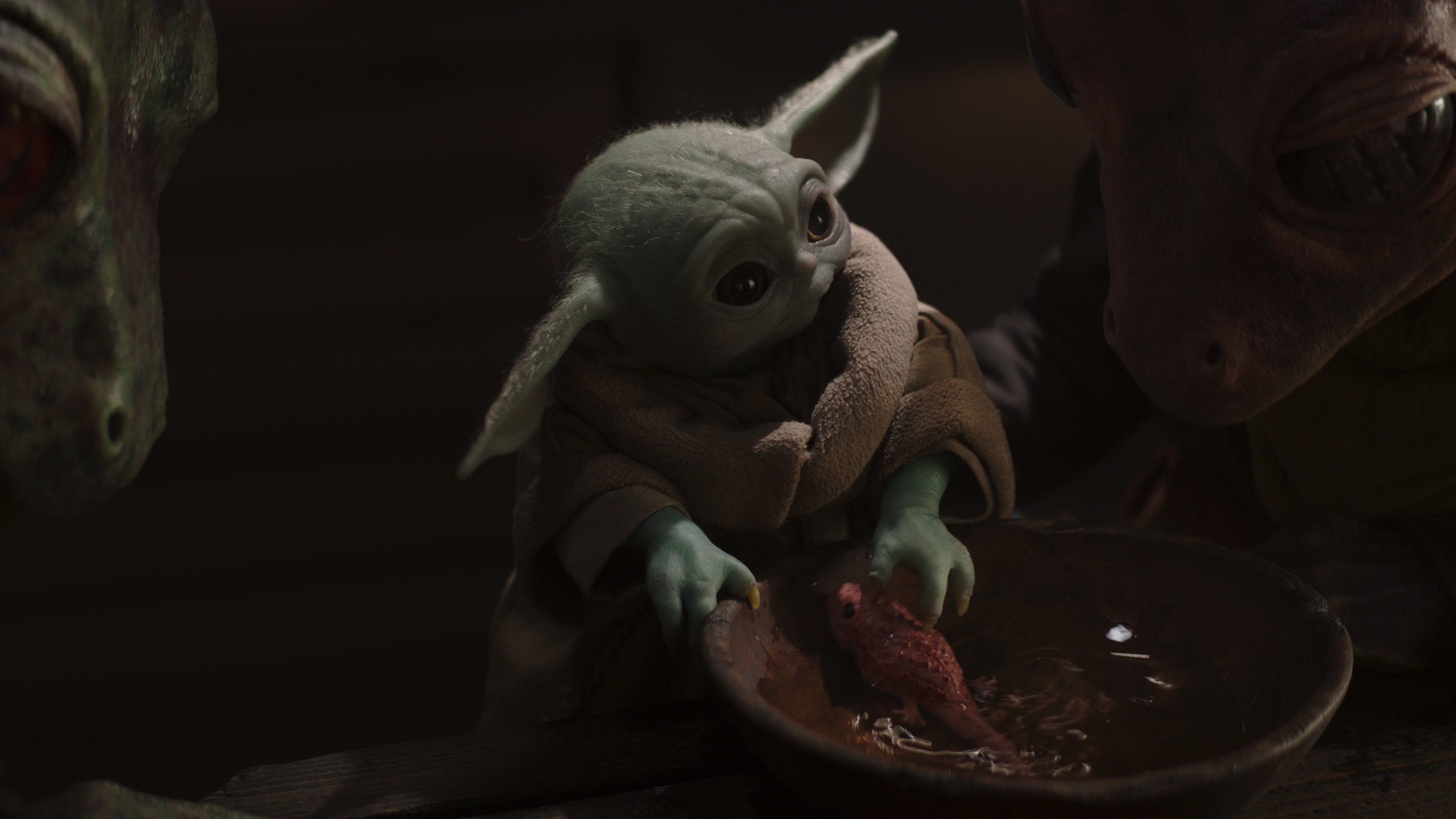 Siri, play “Halfway There” by Big Time Rush. Chapter 12 of The Mandalorian is out on Disney+, marking the halfway point of season two! The plot is starting to thicken, as chapter 12 revisits some friends from the past and the Empire’s dealings with the Child.

In the recap, we relive some footage from Mando’s bounty hunting days in chapter one, and the montage reminds us of the sinister Client, whom Mando demands an explanation from for holding the Child in captivity. Cara Dune, a former drop soldier for the rebellion, Greef Karga, an agent for the Bounty Hunter’s Guild and Moff Gideon, an Imperial governor, also make an appearance in the recap, hinting that we will probably see them soon—and we do.

The episode begins in the present time with the Child helping out Dad Mando in the garage—or spaceship. The Child adorably struggles to plug the wires in their corresponding slots, but Mando rewards the infant with some soup anyway. We get another partial face reveal, as Mando slightly raises his helmet to slurp the soup and remarks that the Razor Crest cannot make it to Corvus in its condition. Mando decides to return to Nevarro to seek repairs and pay his friends, Cara Dune and Greef Karga, a visit. The chapter transitions from the Crest to the Mandalorian refuge colony on Nevarro, where Cara Dune singlehandedly takes out a legion of marauders and saves a muskrat from getting guillotined.

After the title sequence, Mando lands on Nevarro, where he reunites with Cara and Greef. The two exchange life updates, as they lead Mando into the Client’s former lair that the town repurposed as a school, whose headteacher is a C3P0-Esque droid. Hesitantly, Mando agrees to leave the Child in the classroom, as the place Cara and Greef intend to take the gunslinger is not fit for a kid. Using the Force for the first time in a while, the Child steals his desk neighbor’s macaroons.

The trio heads out to discuss business, as Cara and Greef want to recruit Mando for a mission while the Crest is in the shop. Their goal is the eliminate Imperial presence on Nevarro, as an old heavily-armed Imperial base remains on the planet, preventing Nevarro from becoming a trade anchor for the entire sector as Greef desires. The trio head to the base on a landspeeder, piloted by Mythrol, Mando’s bounty target from chapter one who Greef hired.

The quartet infiltrates the base, where Cara strangles the Imperial commander into unconsciousness and pilfers his weapons. Making their way to the access corridor, they find a daunting pit of lava. Using the reactor controls, Mythrol drains the coolant lines, giving the quartet ten minutes to exit the base before its consumed by molten rock. Noticing bodies contained in liquid capsules on their way out, Cara realizes that the base is not a military operation—but a lab.

Mythrol hacks into the system to try to procure some intel, opening a hologram from the doctor, who was in charge of stabilizing the Child in season one. It appears that the Empire has been injecting people with the blood of the Child, who they believe has the highest Midi-chlorian count in the galaxy. In his message—to none other than Moff Gideon—the doctor recommends that they suspend further experimentation with transfusions, as the results do not seem to be turning out well, and their blood supply has run dry without access to the donor.

After realizing that Gideon is alive, a group of stormtroopers ambushes the quartet, and heavy blaster fire ensues. Mando separates from the group and soars away on his jetpack, desperately needing to retrieve the Child. Still, on the base, Cara hacks into a Trexler Marauder, a type of repulsorcraft, piloting the trio out of the base. They take out the stormtroopers chasing them on speeder bikes, but their victory is premature, as TIE fighter reinforcements join the action. However, Mando, the Child and his stolen package of macaroons zoom in with the Crest, blowing the Imperial starfighters out of the sky before heading to Corvus.

Make sure to look out for more of our content on The Mandalorian soon! Want to refresh your memory on season one? Click here for chapter recaps of season one of The Mandalorian. What were your favorite moments in chapter 12? Let us know @capeandcastle on Twitter! Be sure to check out our site for articles on all things Disney, Marvel, Star Wars and more!