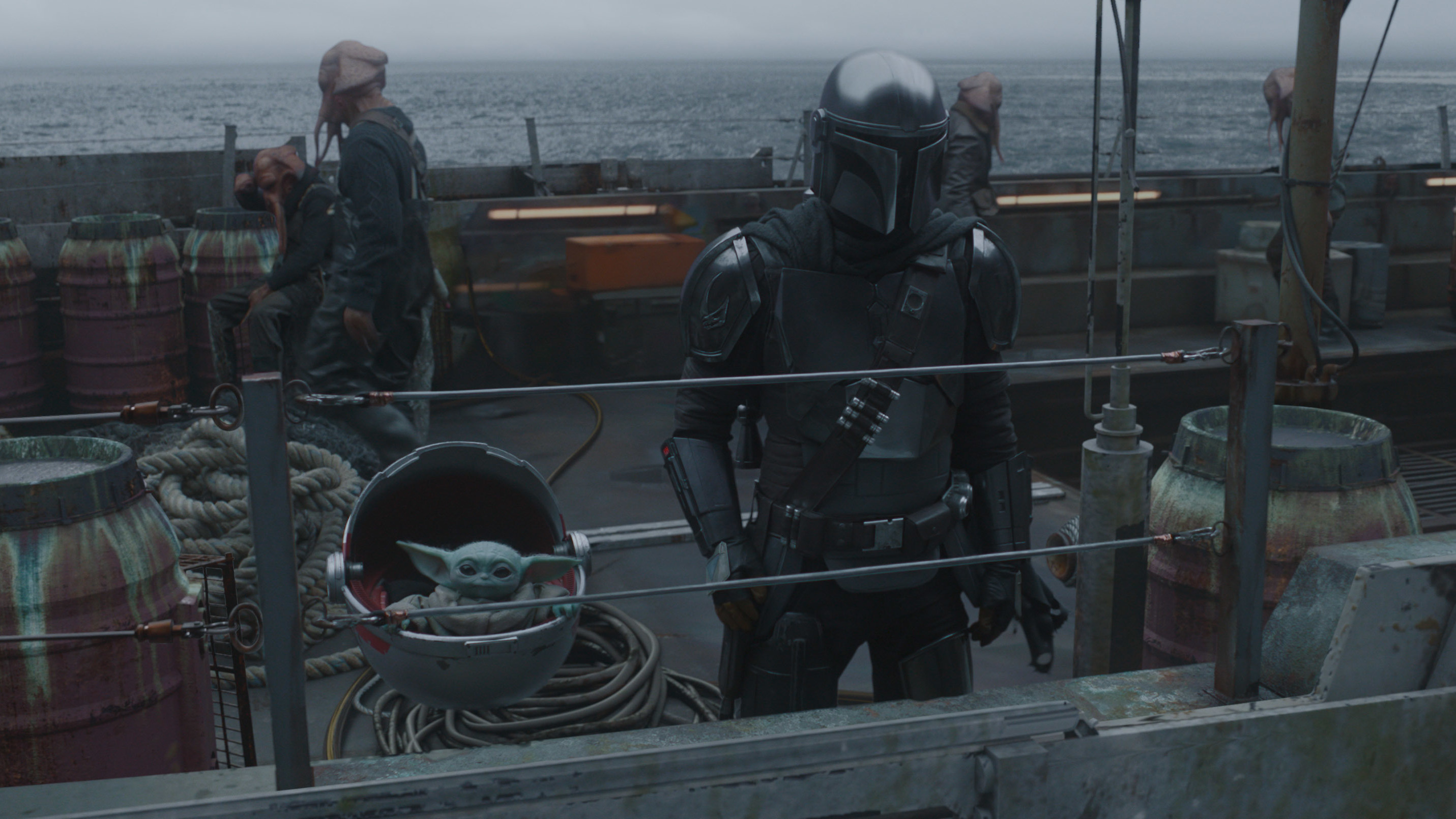 One year ago yesterday, the Star Wars universe introduced us to The Mandalorian, and what a journey it has been. In celebration, we think November 12 should be Baby Yoda’s honorary birthday. Though, Baby Yoda is the one giving the gifts, with chapter 11 live on Disney+!

The opening recap rewinds the tape to the Armorer from season one, who interrogates Mando if he has broken the code by removing his helmet. Are we going to get another face reveal in this one? We love Mando’s armor and masked aesthetic, but covering up Pedro Pascal’s face is a truly tragic thing. The recap also reminds us of Frog Lady—Mando’s passenger who he is carpooling with to the moon, Trask.

Chapter 11 opens with Mando, Frog Lady and the Child slumbering soundly in the Crest. After the most terrifying spider in cinematic history threatened the integrity of the hull last week, the trio manages to limp to their destination, barely avoiding burning to a crisp as they enter the atmosphere. This episode gives us a break from the Mando-beats-up-big-scary-monster plot template season two has used so far. Mando leaves the Crest at a nearby port to repair the damages, while Frog Lady has an emotional airport reunion with her husband. Frog Man takes Mando’s hand as a form of gratitude, and Mando gently explains to the amphibian that he is looking for his kind. The camera pans to a woman lurking around the corner in a Sith-like black hood, but she vanishes. We’ll see her again later.

Mando and the Child go out for some clam chowder dinner, where a waiter tells Mando that he can bring the titular gunslinger to the Mandalorian—by boat. We have spectated empty desert landscapes most of the series, and while they are beautiful, Sailor Mando on the sea is an excellent change of pace.

Mando and the Child watch the aquarium show while their vacay guide, a Mon Calamari, feeds the mamacore. A trap to steal Mando’s lucrative beskar armor, the guide knocks the infant into the water, immediately testing Mando’s driving skills. The shipmates lock Mando into the tank, leaving Mando gasping for breath. Thankfully, a trio of Mandalorian arrives at the scene, rescue Mando and return the Child to the protagonist. Mando only gets a few seconds into his rehearsed ‘I need to take the Child back to his kind’ speech before the Mandalorian commit the cardinal sin—they take their helmets off in unison.

Mando immediately questions their conduct, demanding where they got the armor and emphatically denouncing their status as Mandalorian. The leader of the Mandalorian trio, Bo-Katan of Clan Kryze, counters Mando’s comments by assuring the armor has been in her family for three generations, Mandalore is her home planet and that she offered her military services in the Purge. Bo-Katan labels Mando as a Child of the Watch, describing his adopted Mandalorian family as a cult of religious zealots. She explains that the Watch broke away from Mandalorian society to re-establish the ancient way of the Mandalore. According to her—this is not the way. Disgusted by Bo-Katan’s statements, Mando jets away on his pack with the sunset behind him.

Back on the dock, Mando is approached by his former guide, who ambushes the protagonist in search of Inigo Montoya-Esque revenge for the death of his brother. The Mon Calamari threatens to kill the Child, but the Mandalorian trio return to accept blame for his brother’s death and blast the ambushers into oblivion. Mando and the trio chat over a drink as Bo-Katan reveals that Trask is a black market port that stages weapons, bought and sold with the spoil of their home planet. On a mission to return Mandalore to glory, the trio is scheming to seize Trask’s weapons and seat a Mandalorian on the throne. Believing Mandalore is cursed, Mando warns them that the Empire has taken lengthy precautions to ensure that no one can control the planet.

Bo-Katan extends an offer of unity to Mando, but he rejects it, saying his place is to return the Child to the Jedi. Bo-Katan agrees to help lead him to one of the Jedi, but with a contingency—Mando has to help the trio pilfer weapons from an Imperial freighter. Hiring Frog Lady and her husband as a babysitter, Mando leaves the Child in their possession and prepares for the mission. Once the freighter breaks into the atmosphere, the Mandalorian use the element of surprise and fly onto the spacecraft. Blasting their way through the corridors, the quartet heads toward the cargo bay. The Imperial officer takes a patient approach, commanding his troopers to hold the Mandalorian off until the craft can make the jump to hyperspace. However, another officer usurps his superior by trapping the Mandalorian in the cargo control area—exactly where the quartet wants to be.

The Imperial officer takes his life before Moff Gideon can but sends off a distress signal. Before jumping ship, Bo-Katan thanks Mando for his bravery and tells him to take the foundling to the city of Calodan on the forest planet of Corvus to find none other than Ahsoka Tano. Mando returns to the home of Frog Lady and her husband, where the Child is tenderly playing with one of their amphibian offspring. Our favorite duo boards the Razor Crest, and they jump into hyperspace to continue their mission.

Make sure to look out for more of our content on The Mandalorian soon! Want to refresh your memory on season one? Click here for chapter recaps of season one of The Mandalorian. What were your favorite moments in chapter 11? Let us know @capeandcastle on Twitter! Be sure to check out our site for articles on all things Disney, Marvel, Star Wars and more!