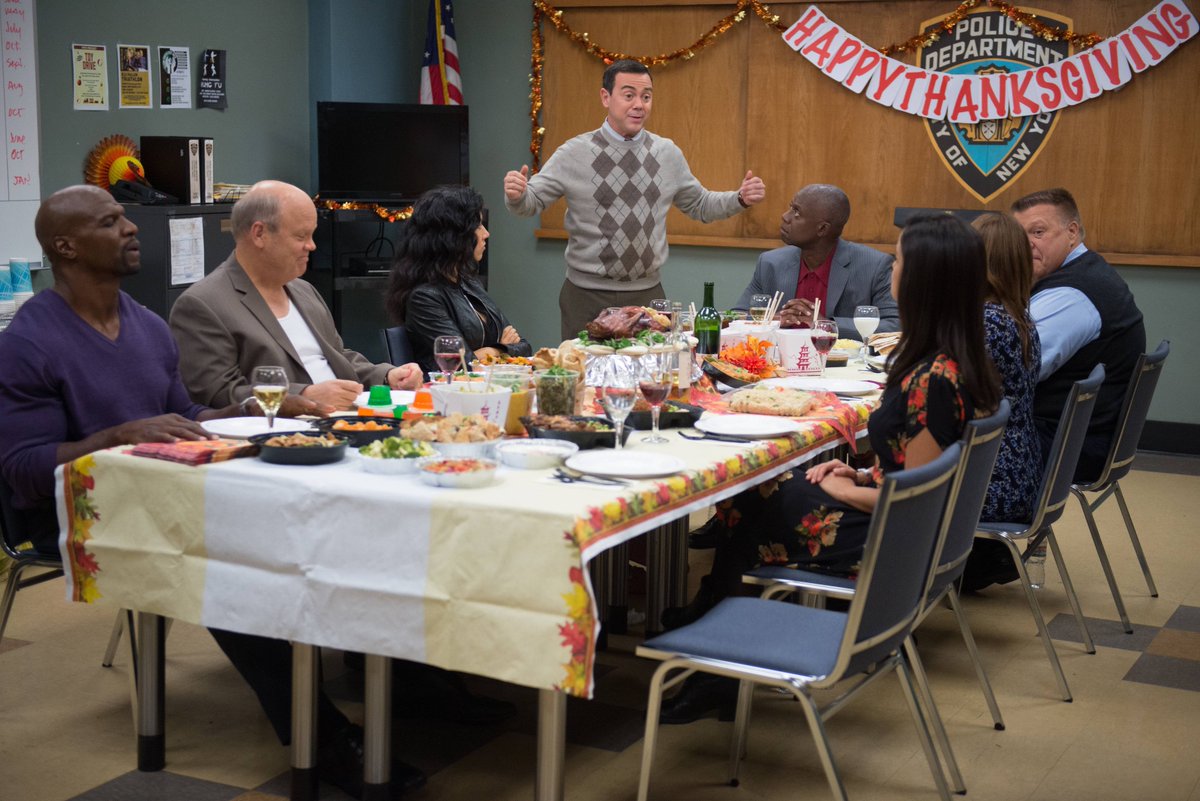 We love Thanksgiving! Which is one of the reasons why we started our 30 Days of Thanks tradition in the first place. With so many characters, ships, and shows it’s easy to find things to be thankful for. This year we are focusing on shows that have graced us with Thanksgiving-themed episodes. And of course, B99 was one of the first to come to mind! So let’s discuss Brooklyn Nine-Nine and the Thanksgiving episodes we’ve been given over the years! Because they are certainly something to be thankful for!

Our first Thanksgiving-themed episode of Brooklyn Nine-Nine was appropriately named ‘Thanksgiving’. But that was just about the only basic thing about it. From Boyle Bingo to Amy trying to create the perfect holiday speech and everything in between, the tenth episode of the first season has so much to give. Including nothing but laughs when we got to watch first hand as the squad experienced Amy’s cooking. If you can call it that. But by the way everyone reacted, we don’t really know that you can. While their dinners were nothing but awry, at least the squad was able to enjoy a meal together. Even if it was a meal from various takeout places. 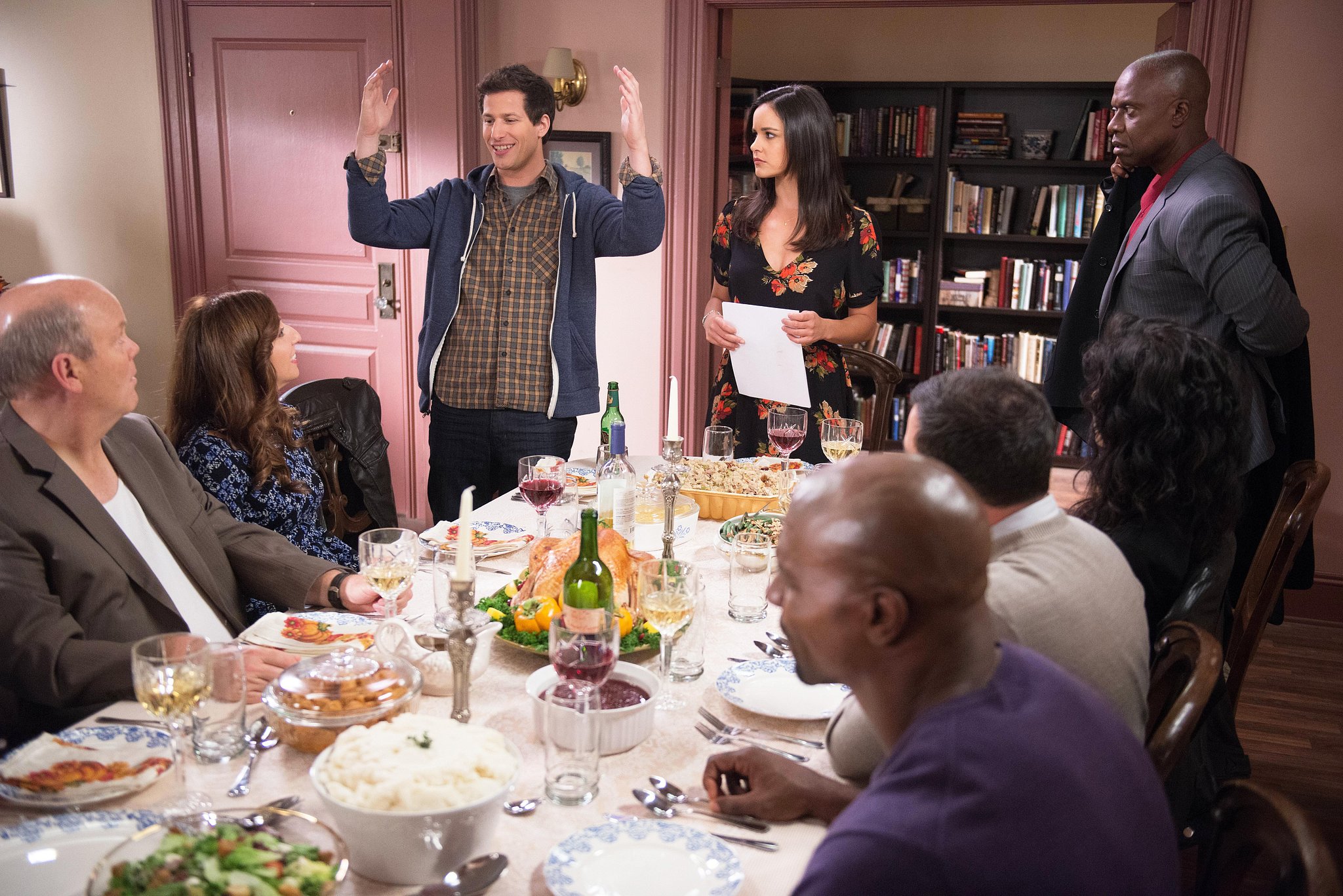 The first Thanksgiving episode certainly had us excited for the next one. And once again, B99 did not disappoint. While the squad didn’t all get to be in the same place this time around, we still enjoyed the holiday. We probably enjoyed it a bit more than most of the squad did. Jake left in charge of the precinct as it goes into lockdown? Holt and Terry not being around to keep him in line? Yes! Count us in! As a bonus, we got to see Holt help Terry stand up to his brother in law. All in all, the seventh episode of the second season is a serious riot. Literally. At one point, there was a bit of a riot in the precinct.

It felt like there were a lot of changes that hit by the time the third Thanksgiving-themed episode came our way. Terry’s family was growing and kind of becoming a bigger part of the story. Amy and Boyle were closer and Hitchcock and Scully were beginning to shine. As much as two screwballs can. But it was great watching Jake do his best to keep a very pregnant Sharon occupied. We definitely consider this a practice run for when it was Jake’s turn to be a dad. Aww, the feels hit us every time we think about it! While this isn’t our favorite episode, it’s definitely still worthy of a place on the watchlist.

Then we got ‘Mr. Santiago’. And this episode is pure gold! It’s definitely one of our favorites. Between Holt trying to help Adrian and then threatening to sue him and Boyle deciding to get a real turkey since there were none left at the store, this episode was full of hysterical moments! But then we had Jake and Victor, Amy’s dad, teaming up to solve a case while Jake does his best to impress. Even going “full Santiago” with his binder of information and everything. He made us proud in this episode. And the pure joy we had in watching the rest of the squad deal with the live turkey has us laughing just thinking about it. This one absolutely needs to be on your watchlist this Thanksgiving!

While we hope season five’s Thanksgiving episode isn’t the last, we cherish it anyway. Now that Brooklyn Nine-Nine has moved to midseason, there is a good chance that we won’t get to see the holiday episodes anymore unless they come up with more situations like “Valloweaster”. Which is honestly a shame because they are some of the best. But if this had to be the last one, at least it was a great one! As if Jake bringing his mother and father together wasn’t enough, they add Amy’s parents to the mix and it’s an utter disaster. But we have to admit that we relate to it so hard. In-laws do not need to unite during the holidays. Just do multiple dinners. Trust us. It’s easier. Even if things kind of worked out for Amy and Jake with their parents, in the end, we suggest just avoiding it. 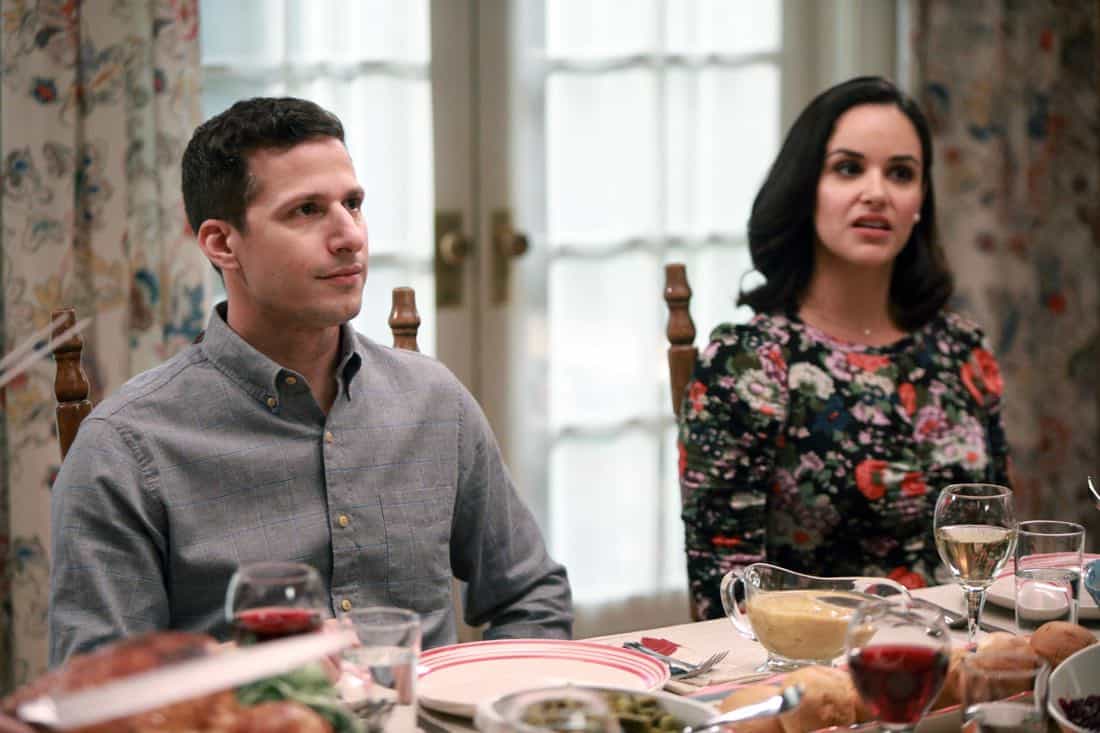 Do you love Brooklyn Nine-Nine as much as we do? Which Thanksgiving episode is your favorite? Do you think we will ever get another Thanksgiving-themed episode now that the show has moved to midseason? What do you hope to see out of the next season? Find and follow us on Twitter @capeandcastle to share all of your thoughts on Brooklyn Nine-Nine, Thanksgiving, and more! Be sure to also check out our site for more articles on all things Disney and beyond!