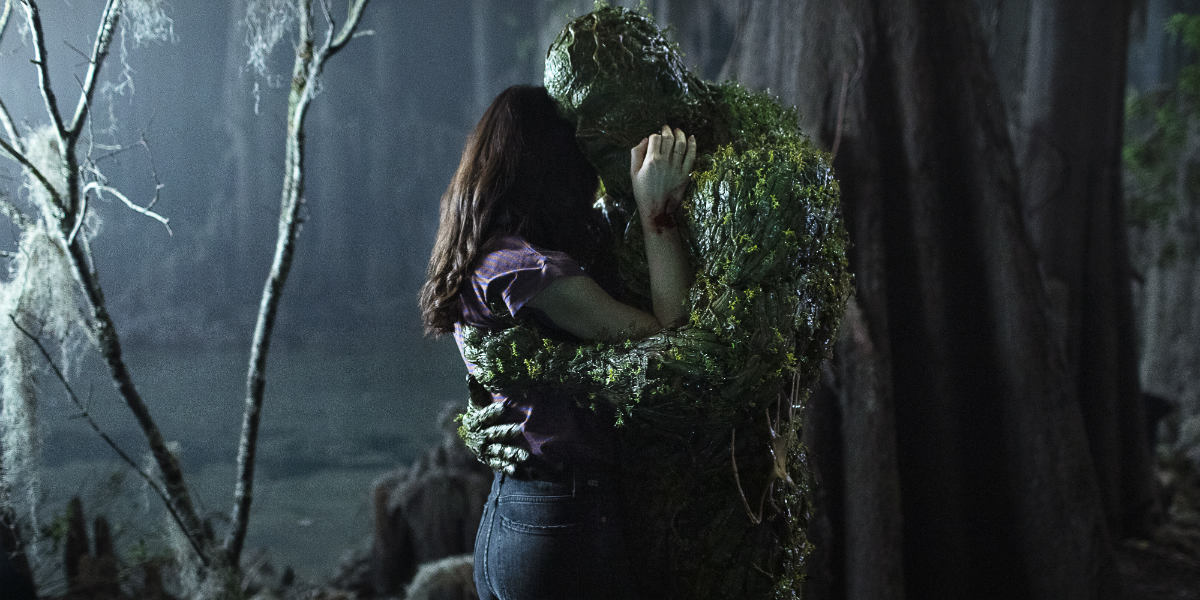 . Last week on Swamp Thing (review here), Abby Arcane thwarted the deadly disease threatening the residents of Marais with Swamp Thing’s help. This week, something dark and ancient has come forth out of the swamp and threatens people. Abby seeks to find a way to help figure out what happened to Alec/Swamp Thing. But, that may have to wait. Something ancient has surfaced in the swamp and been released, causing some of the residents of Marais to hallucinate their worst nightmares. 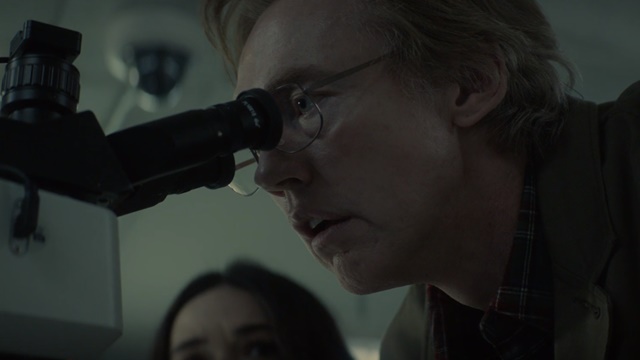 Abby (Crystal Reed) goes out into the depths of the swamp to find Alec/Swamp Thing (Derek Mears). She’s determined to find out how to help Alec/Swamp Thing but needs a tissue sample of him to study. Against her better judgment, Abby brings Dr. Woodrue in on this research project. Sworn to secrecy, Woodrue just wants to get his hands on it and explore this newfound discovery.

All I know is that this is shaky. Woodrue is obviously not trustworthy, having worked with Avery Sunderland (Will Patton). Abby really shouldn’t have handed that DNA over. The obsession is bulging from Woodrue’s eyes and it’s going to lead to nothing good. Not at all.

It’s In Your Head

A decrepit body falls out of the trees of Marais’s swamp on top of two men that are chopping down trees illegally. Through the transfer of blood, a powerful and strange, hallucinogenic darkness begins spreading. Moving from one person to the next, the hallucination provoking fear with terrifying visions. It even grabs hold of Liz’s (Maria Sten) father, bringing back a horrifying and tragic memory of his.

Abby goes to the swamp with a gut-feeling the darkness came from there. She encounters Swamp Thing who tells her that whatever darkness was in the body is gone now and has been moving from place to place. The way Swamp Thing talks about it shows how quickly he’s become a part of the swamp and how he’s beginning to understanding his purpose.

Abby displayed some phenomenal bravery and in doing left herself vulnerable, catching this darkness that was released. The dreadful terror she hallucinated was some mysterious man she used to have nightmares about as a child. Somebody that would rip her away from her life. Yet, proving that he isn’t a terror as well, Swamp Thing/Alec takes it within himself. Abby bore witness to him returning the darkness to the swamp. 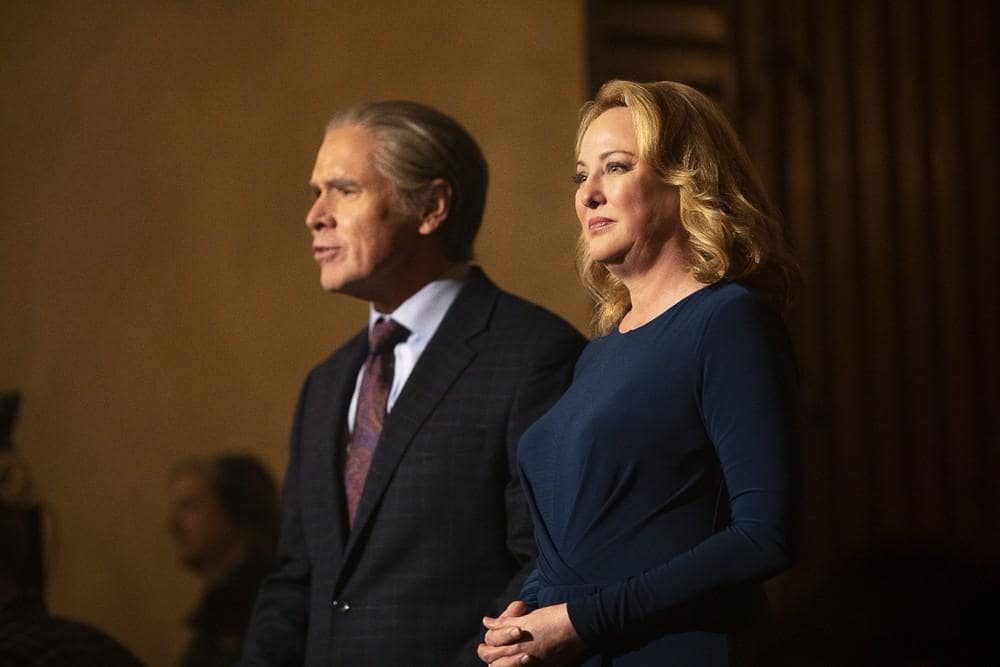 It’s a time for celebration. The Sunderlands host a crawfish boil in honor of the deadly disease finally being eradicated. However, it turns into a stand-off when an infected Sheriff Lucilia (Jennifer Beals) pulls her gun and aims it at Abby. Daniel Cassidy (Ian Ziering) takes this opportunity to step in to save the day. Yet, his determination to do some good is more self-serving. 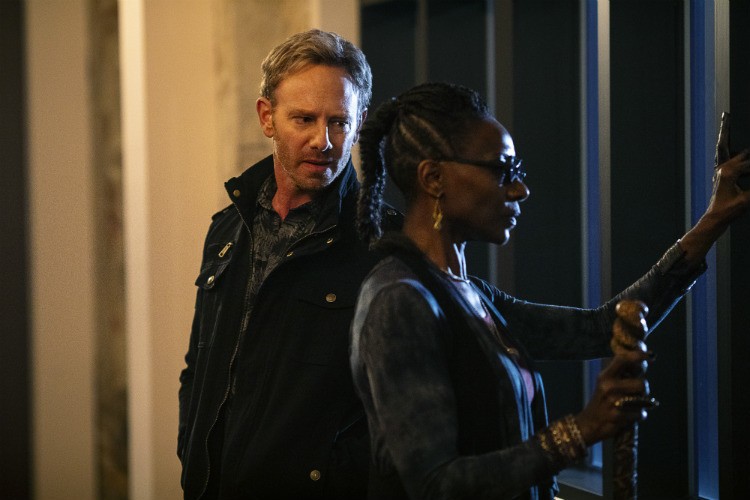 “You’ve been called to a destiny.” – Madame Xanadu (Jeryl Prescott)

With the small and curious reveal of Daniel’s past previously, he sits on the fence of being good or evil on the show. In the comics, Blue Devil has been shown to be on the evil side, I’m somebody that enjoys seeing the script getting flipped. Daniel’s storyline is a perfect place to do it. He’s been in Marais for a long time and it’s my hope that with Abby’s help, he discovers what destiny it is that awaits him. Hopefully, it’s a good one. But, with his selfish nature and ego, who knows. He may have his own darkness to overcome.

Ziering’s performance as Daniel really makes him shine. Normally seen as the parody/comedy star, it’s refreshing and eye-catching to see him in this role and definitely one of my favorite highlights in his show. Still wishing and rioting for a second season, he totally needs to be in it. His subtle presence is fantastic while also amusing, and I know I’m not the only one that loves it.

This episode proved how diverse this show can be with its storytelling. Sure, another disease started directly after one has ended, but it wasn’t drawn out. It was completely different, making a point that storylines aren’t repeated. Also, arcs have been drawn more articulately, not just with Daniel but with Abby and the Sunderlands as well. Not going to lie, I’m feeling shaky as hell about Avery buying Susie from her relative to appease his wife. Actually, I’m disgusted. The man has no limits to his treachery. Abby is on the opposite end of the spectrum and I wonder what it may cost in the end to be as selfless as she is.

What did you think of this week’s episode? Let’s chat in the comments below and don’t forget to follow @capeandcastle on Twitter to keep up with other shows you love!