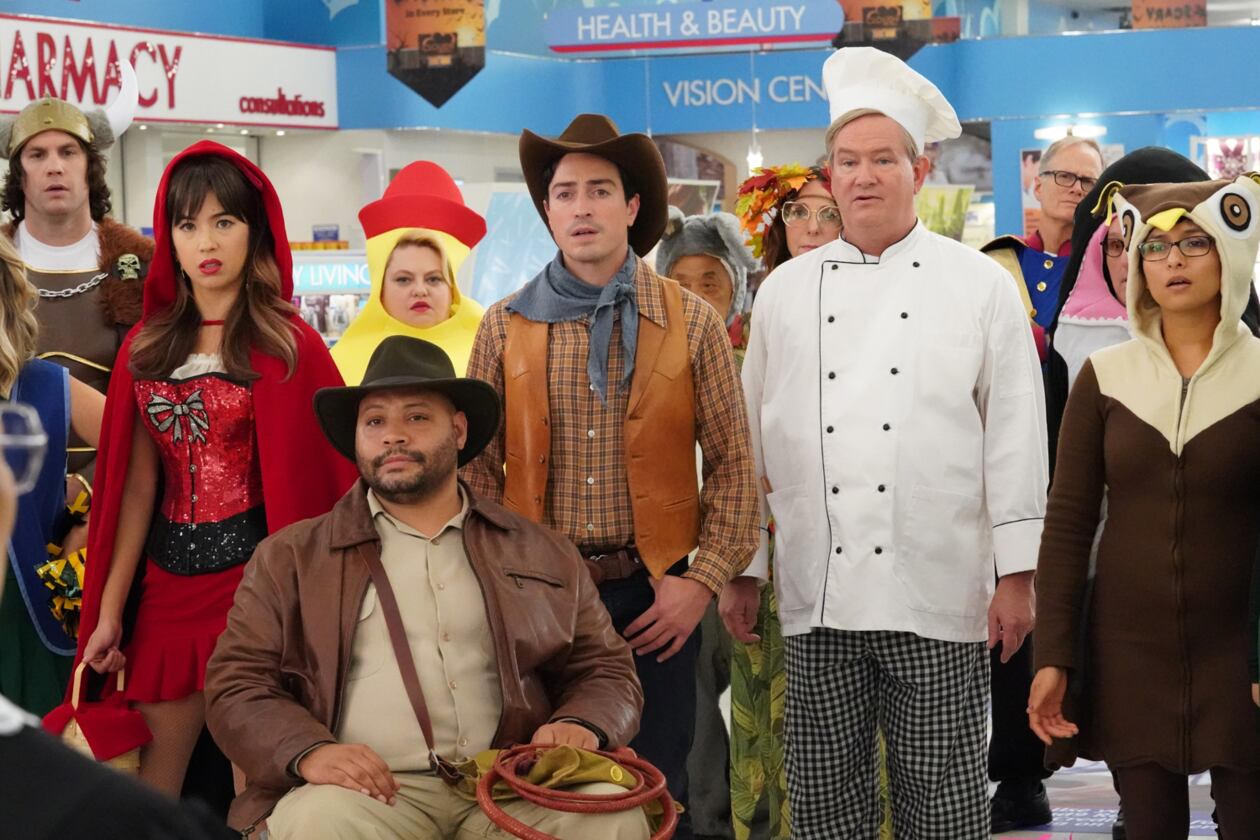 Now, if I had to elaborate (at least for the sake of making this article meatier), I could tell you the characters are all colorful and unique, the humor is biting and a little zany, and the political and social issues addressed are always apropos.

The Halloween special episodes are no exception to the above and perfectly tick all the boxes I have just listed.

Without further due, let’s check out some of the best Halloween moments Superstore has given us.

This debut Halloween special series kicked it off right away by introducing what will become the coolest costumes you could ever imagine tradition. At Superstore, the employees think big when picking their outfit.

Garrett is James Blond, Cheyenne is Pikachu, even Jonah — whose costume is made fun of all episode — cleverly mixes originality and political activism. Amy dazzles as Cleopatra, but only for a while. After it comes to light that Dina’s scapegoat Sandra has dressed up as her, Dina grabs the first costume available which turns out to be a (very) sexy cop costume.

An iconic look that became a fan’s favorite and makes a cameo every Halloween episode (next step should be to add it to the ending credits, perhaps).

Dina’s look becomes distracting to pretty much anyone, really (but can we blame them?)

The grotesque situation escalates when a horrific produce theft turns Dina into a “bad cop” in her relentless investigation in the name of justice.

An episode you can watch again and again — it never gets old!

Things are taken up a notch (or maybe ten), when the episode opens with the discovery of a former employee’s body trapped in the walls. Gruesome, right? Well, Superstore manages to turn it into a running gag. While the staff waits for the body to be collected, the corpse involuntarily becomes the store’s Halloween attraction. For those who are like some good dark humor, this is definitely the episode for you.

In the meantime, Amy, dressed as music icon Selena (“Beyoncé before Beyoncé”) meddles in Jonah’s romantic affairs and accidentally matches him up with the new employee on a dating app. Rather than own up to it, Amy spends the whole episode tightrope walking to save appearances.

But only for a while.

It all blows up in the climactic confrontation below:

Superstore takes Halloween to a whole new level in this episode. If you haven’t yet, check it out.

The Superstore employees live in an evergrowing capitalist world. And not even Halloween can get out of its reach.

The fun, lighthearted Halloween costume tradition turns into a ruthless competition when a day of paid time off is the winning prize.

All the employees trade costumes for more popular (or sexier) ones and stoop to new levels to snatch the prize.

On a different note, this is also the first Halloween episode with Jonah and Amy as a couple and Jonah goes to unexpected lengths to make his girlfriend happy when he rigs the competition. Yeah, it’s wrong but it’s also aww, see what I mean?

Meanwhile, Garett goes on a personal vendetta against a Halloween song and Glenn deals with the haunting of a malicious cart collector.

So for this Halloween, treat yourself with some candies and a spooky Superstore binging!

As for those whose head is already in Thanksgiving celebrations (and Cape & Castle have got you covered with an upcoming series throughout November), Superstore has just the right merch for you: