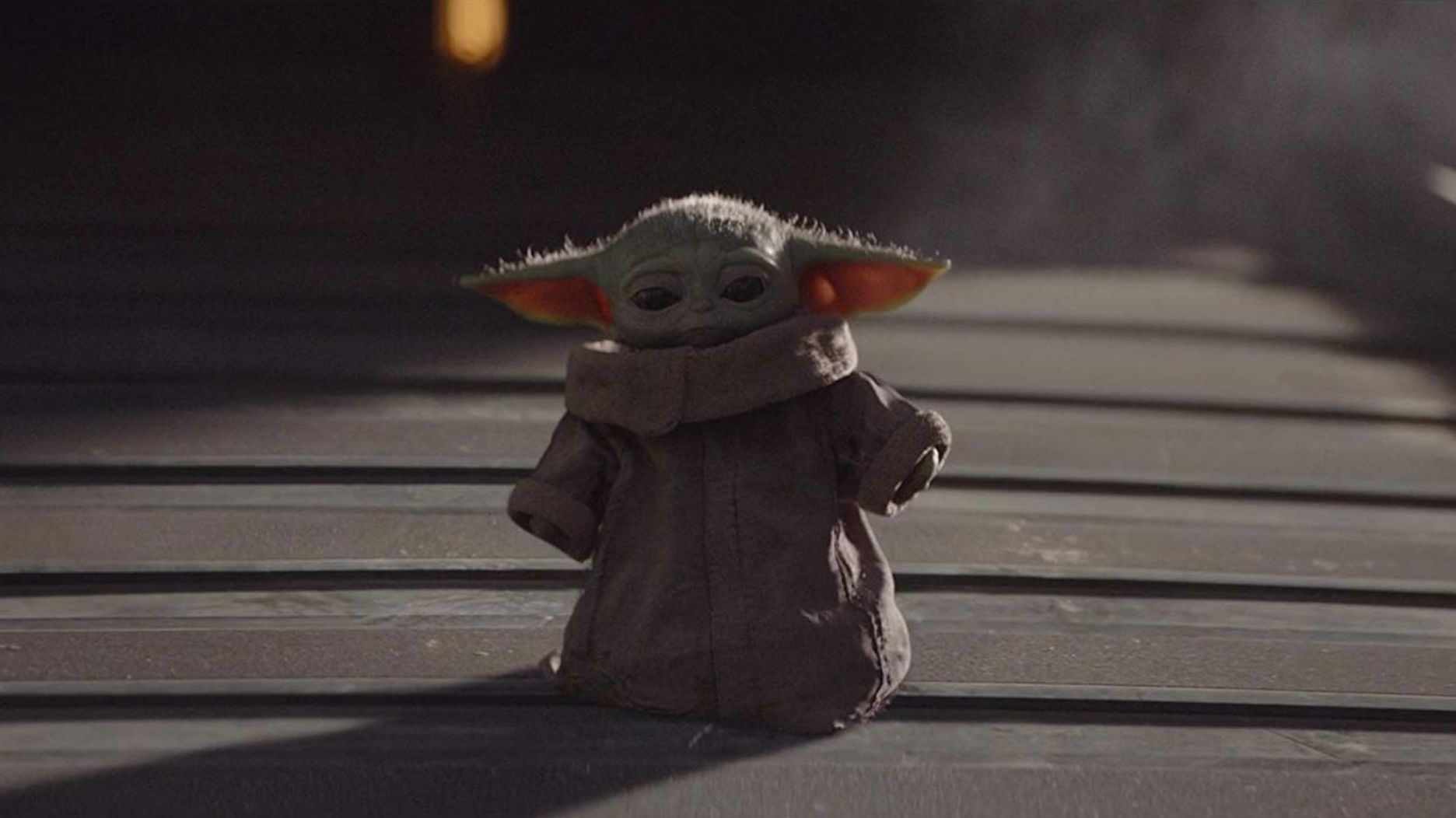 This is the way! The season two premiere of The Mandalorian is live on Disney+, and we couldn’t be more excited to see our favorite Mando-Baby Yoda duo back at it! We got you covered on everything all the action that shook down in Mando’s new quest to return the internet’s child to its Jedi people.

Warning: Are these the spoilers you’re looking for? 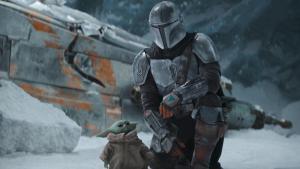 The ninth chapter begins with a recap of season one that includes features a heavy emphasis on Mando’s creed as well as giving us a sweet reminder that enemies are still pursuing Mando as the now father of Baby Yoda. We have a feeling this season will pose drastic implications for Mando’s people, as well as challenge his ability to protect the Child as he searches for the Jedi.

Back in the present time, our protagonist journeys through a heavily graffitied, desert town. Mando approaches a Twi’lek who appears to be a bouncer for the building the titular gunslinger wants to enter. Mando states that he is looking for a figure named Gor Koresh. The Child delivers its first coo of the season, and the Twi’lek offers a facetious “Enjoy the fights” greeting as Mando enters.

The ominous mood thickens as Mando approaches a WWE-esque ring where two green creatures, Gamorreans, spar in a contest that resembles two Incredible Hulks fighting with Gimli’s ax from The Lord of the Rings. Mando walks up next to a spectator—Gor Koresh—who admonishes him for bringing a child into the arena. Mando explains how he is quested to return the Child to its people and needs Gor’s help to track down fellow Mandalorian. Refusing to do business immediately, Gor wants to enjoy the entertainment for now, as the Gamorrean he has bets on isn’t doing so hot. The Gor attempts to goad Mando into betting his Beskar armor, but Mando, not the Vegas type, refuses. Gor declares he doesn’t like to leave things up to chance either and shoots the opposing Gamorrean dead.

Gor and his posse surround Mando as the gambler reveals himself to be a Mandalorian hunter who is after the clan’s lucrative Beskar armor. The Armorer was right last season when she said Mando’s armor would draw many eyes. Gor threatens to take the armor off Mando’s cold, dead body, but Mando, heavily outnumbered, defeats them in under a minute with a mix of missiles, knives and hand to hand combat. Mando, refusing to let Gor die by his hand, hangs him upside down and demands to know where more other Mandalorain are. Gor gives in, saying the Mandalorian he knows in on Tatooine in the city of Mos Pelgo. Gor swears on the Gotra that he is speaking the truth, and Mando leaves him hanging as red lights surrounded the lynched Mandalorian hunter.

After the title sequence, Mando and the Child approach Tatooine in the Razor Crest. The music and overall mood changes from ominous to adventurous, and Mando lands outside Peli Motto’s shop to get some repairs done on the Crest. This time, Mando lets her use droids. Growth.

Peli’s reaction aligns nicely with ours when we think about the existence of the Child. But, wait! Don’t overlook the fact that Peli just revealed she knows something about Jedi lore! Though our protagonist doesn’t pick up on anything, and she says nothing more on the matter. Besides repairs, Mando explains to Peli how he needs to track down his kind, as Mos Pelgo doesn’t appear to be on any maps. Peli shows Mando a pre-war hologram map of Tatooine and points out Mos Pelgo, revealing the city to be an old mining settlement.

Borrowing one of Peli’s speed bikes, Mando jets off to find Mos Pelgo with the Child, who is as happy as a dog sticking his head out the window of a car. Mando slowly peruses the town as an array of villagers eye him curiously. Mando enters an establishment and asks the bartender if he has seen other Mandalorian. The Child hasn’t lost its propensity to wander, as it spectates from the ground of entrance. The bartender says he has seen someone whose armor resembles that of Mando’s but refers to him as the Marshal. The camera pans, and we see another “Mandalorian” standing beneath the doorway. The figure is Cobb Vanth, Marshal of Mos Peglo, who invites Mando over for a drink. Cobb sits down at a table and commits the cardinal sin of Mandalore culture—he removes his helmet. Exposing himself as a Mandalorian fraud, Cobb confesses he bought the armor off some Jawas—Boba Fett’s armor.

Mando wants him to hand it over, disgusted by Cobb’s appropriation of his culture, and challenges Mos Pelgo to a duel. Do not throw away your shot Mando! Before the sparing begins, an unknown factor causes the ground to shake. Mando, Cobb and the bartender quickly waltz outside to see the villagers scrambling back into their shelters as a warning siren chimes in the distance. A massive creature called a Krayt dragon that we can best describe as the Alaskan Bull Worm from that one SpongeBob SquarePants episode slithers through the sand and horks down a Bantha as a quick snack. Electing to verbally resolve their differences, Mando and Cobb take a stroll through the town as the Marshal explains his duties to protect the villagers from bandits and Sand People but confesses that he is no match for the Krayt dragon. Proposing a deal, Cobb says he will return Boba Fett’s armor to Mando if the gunslinger helps him take out the dragon. Mando agrees, and the two head for the dragon’s habitat.

On the way, we revisit footage from Return of the Jedi, as Cobb explains the after-effects of the second Death Star’s demise on Mos Pelgo, another Tatooine city. Though the Empire pulled out of Tatooine after their defeat, the residents didn’t have long to celebrate, as the Mining Collective immediately stepped into the scene and turned Mos Pelgo into a slave camp. In a bar when the Mining Collective arrived to bring about a slaughter, Cobb was able to escape and pilfer a camtono filled with silicax crystals. Wandering through the deserts of Tatooine without food or water, the Jawas nurse him back to health and barter Boba Fett’s armor for the crystals.

Mando and Cobb reach their destination and descend from their bikes, but Womp rats quickly surrounded them. While Mando calmly approaches a Womp rat and pets it tenderly, several Sand People emerge from the shadows. Mando communicates with the Sand People in Tusken, discovering that they want the dragon dead as well. The two sides ally and chat in Tusken around a campfire; however, the scene quickly goes awry when Cobb refuses to drink the water the Sand People generously offer him. Mando uses his flamethrower to disband the shouting match before fighting can ensue. When day breaks, the team approaches the dragon’s habitat, which happens to be an abandoned Sarlacc pit, like the one Jabba the Hutt entertained himself with by tossing in prisoners.

Getting a little too close for the dragon’s liking, one of the Sand People gets viciously devoured, causing the Child to cower in fear from a safe distance. Adjusting their strategy, Mando and Cobb return to the village of Mos Pelgo to gather reinforcements. Meeting with the villagers, Cobb delivers a pep talk, while Mando convinces them that the Sand People can be trusted and their former Tusken enemies will vow never to raise another blaster on the village if they offer their services in the fight. The people agree, allowing the Tusken Raiders to enter the village on their Banthas. They travel together to the former Sarlacc pit, where luckily, the dragon is asleep, giving the villagers and Sand People time to burry explosives, as the belly is the dragon’s weak spot. Several Tuskens awaken the dragon, trying to make it angry enough to charge.

They lure the dragon out far enough to activate the detonator, but the explosives aren’t enough to vanquish it. Applying some quick thinking, Mando grabs a Bantha to bait the dragon to swallow both the gunslinger and beast whole and blows the dragon up from the inside. Several moments later, Mando rockets out of the mouth of the dragon on his jetpack, and the allied sides rejoice in their victory. After harvesting some of the dragon’s flesh, Mando and the Child speed away from the battlefield unscathed. As he rides into the sunset, a scarred man looks on with a threatening gaze. Who is this mysterious figure? None other than Boba Fett.

Make sure to look out for more of our content on The Mandalorian soon! Want to refresh your memory on season one? Click here for chapter recaps of season one of The Mandalorian. What were your favorite moments of the premiere? Let us know @capeandcastle on Twitter! Be sure to check out our site for articles on all things Disney, Marvel, Star Wars and more!