After such a long time without it, This Is Us has finally returned and it was everything we could have ever wanted and more. On top of that, we got a double episode premiere! Exciting! So keep reading below for our This Is Us 5×01 and 5×02 recap! We definitely needed the refresher on what happened in season four to kick us off. Including that awful no good fight between Randall and Kevin!

Parenthood in a Pandemic

We pick up in Kate’s living room where Kevin and Madison are still absorbing the shock of their impending parenthood. Madison mentions that with the world turning upside down as they speak it’s probably not the best time to be bringing a child into the world, but Kevin downplays it by pointing out if it was as serious as everyone is saying it is his agent would be calling him. Cue Kevin’s cellphone. Oops. 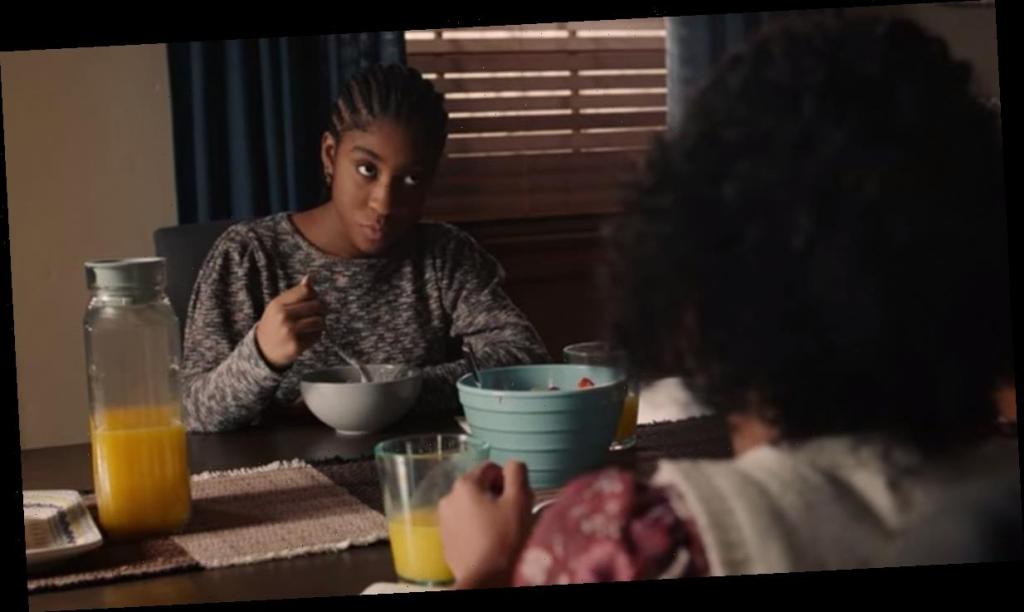 Back in Philadelphia, Déjà is adding to  Annie’s worries over catching the virus. Tess tells her to stop, but Déjà says that it’s serious and they have to treat it as such. Randall and Rebecca are talking in the kitchen about his mother. The clinical trial has been postponed, so Rebecca and Miguel, who were already on their way to St. Louis, are going to ride out the pandemic at the cabin. Beth then makes the shocking discovery that Tom Hanks has COVID 19 and we get a little bit of humor as Randall insists on being the one to tell Kate.

A few months later, we find a masked Kevin knocking on his sister’s door. She won’t let him in, but she and Toby have a socially distanced reunion with her brother on their front lawn. Toby brings the jokes as Kevin announces he has big news – is he the new Batman, did he buy a tequila company, did he knock someone up – and is thoroughly confused when Kevin brings Madison out of the car. And they tell Kate they’re having twins. Kate is over the moon happy and there are air hugs all around! Much to the amusement of her neighbor. Hi, Gregory!

An exhausted Randall returns home from work, greeted by Beth who gives him hand sanitizer and the news that Kevin is going to be a father. Randall seems as overjoyed as his sister and we find him typing out a gushing text to his brother which he then edits to a standard congratulations. Kevin does the same changing his response to a simple “thanks”. As Randall contemplates this new development his phone alerts him to breaking news. A man, George Floyd, has been murdered.

The show doesn’t shy away from the impact the news has on Randall and his family. We see Randall and Beth discussing the video while in bed. They’re watching the nightly news with their three daughters. We find out that Kate took Jack to his first protest march and has been texting Randall asking which organizations she should donate to next. Although, Beth doesn’t seem overly impressed with her sister-in-law’s new found activism. It’s Tess who finally breaks and asks if they can switch the channel and Annie puts on Family Feud.

Kevin and Madison (who are self-isolating together at her house) are also watching Family Feud and Kevin reminisces about watching it as a kid with his siblings. Madison suggests renting an RV and, after getting tested and quarantining, traveling to the cabin with Kate, Toby, and Jack to spend his fortieth birthday with his mother and Miguel.

And finally, it’s the big three’s day! Randall has pulled another all-nighter trying to keep his constituents afloat, but as he proudly points out to Beth he has no hand tremors and has been doing twice-weekly virtual therapy sessions as a preventative measure. Beth tries to get Randall on board for a visit to the cabin but he’s not interested. He’s also not interested in sexy time although I will admit Beth’s approach could use some work. Reminding your husband that your family is barely making ends meet is probably not the turn-on you think it is.

Beth is confused by all the mixed signals until Randall finally confesses what’s truly bothering him. How do they even know it’s his birthday? What are the odds that he was born, taken to the firehouse, and the hospital, on the same day? He literally knows nothing about that part of his life. And this sets up the flashback portion of the episode as we find out new clues about William and Laurel and how the big three became the big three.

Did I mention it’s also Déjà and Malik’s one year anniversary? How time flies. Randall is sitting out on the front stoop when Malik arrives and the two discuss Malik’s participation in a recent protest march. Randall shares with him a story about when he was a boy and watched a black man die on television and how he kept those feelings to himself and never told anyone about it until now.

At the cabin, everything is coming up roses, or at least tomatoes. Miguel is helping Rebecca garden and making plans to cut down an old tree and replace it with a sapling which should bear fruit in a year or so. Rebecca is doing so well being at the cabin and on the new medication that she’s even planning on making Kevin and Kate’s favorite dishes from memory. Everything is perfect. No wait, I forgot what show I’m watching.

Kevin finds Madison in their room. She tripped over a suitcase and fell on her stomach and now she can’t feel the babies moving. They sneak out of the cabin so as not to alarm anyone and head to an emergent care clinic where the doctor can only find one heartbeat. As they wait for the doctor to return with better equipment, Kevin makes a flowery speech to Madison about how much he appreciates that she doesn’t see his broken parts and asks her to marry him. Madison accepts. But after both babies are found to be healthy, she tells Kevin he doesn’t have to marry her and after some back and forth they agree to stay engaged. I may still hold out hope for a Sophie endgame but these two are really cute together.

Rebecca meanwhile decides to head out to buy the birthday cake. Kate is concerned but Miguel assures her he and Rebecca have a system. And it’s important for her mother to keep her independence. Rebecca quickly becomes disoriented when she spies a young man she mistakes for William. Kate panics when she cannot reach Kevin and calls Randall instead. Kevin and Madison arrive back at the cabin just as Miguel receives word that the police have found his wife and are bringing her there. They settle Rebecca in for a nap just as Randall shows up. Things are tense but Randall assures Kevin he doesn’t blame anyone for what happened and goes upstairs to talk with his mother. 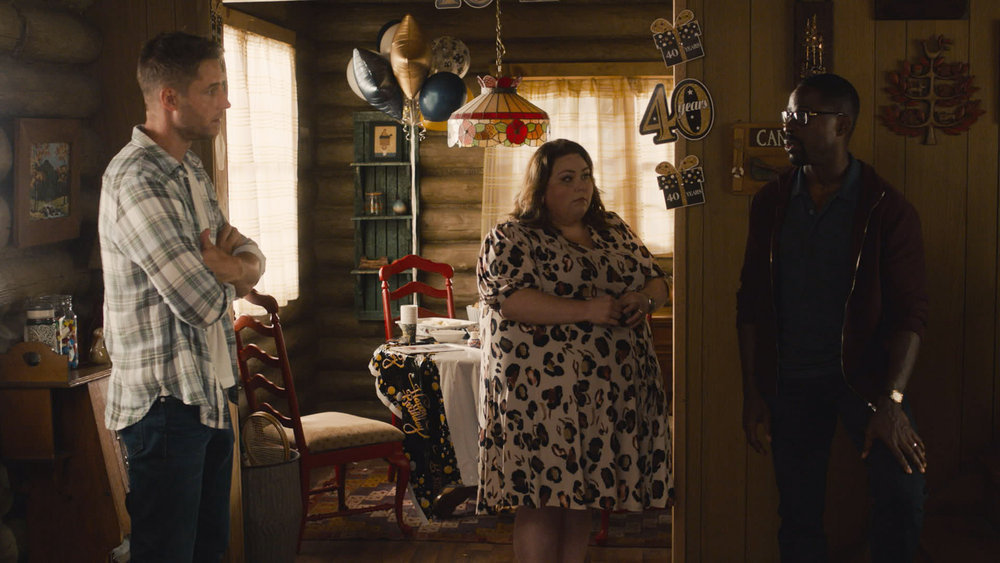 Toby finds Miguel beating himself up over Rebecca’s latest episode. Toby reminds him that it was just one bad day and manages to make the poor man feel better. Rebecca’s doctor contacts Miguel and Randall interrupts the conversation with the discovery that Rebecca’s current confusion might be because she mixed her medication with an antihistamine for poison ivy. Randall saves the day!  Miguel later offers his wife reassurance and shows her some seeds he bought instead of a sapling that will bear fruit in six to ten years. I know some people do not like Miguel but that was one heart-melting move on his part.

Kate and Kevin are both disappointed when Randall begs off staying for dinner saying he promised Beth and the girls he wouldn’t be late. She wants her brothers to make up and follows Randall out to the car. Kate apologizes and is confused when Randall asks her what she’s sorry for. He goes on by saying she’s only just now interested in understanding his pain when black people have been dying on camera for some time and it was never talked about in their family growing up. When Kate begins to cry, Randall confesses he hates to upset her and all he wants to do is give her a hug, but he can no longer make people feel better about themselves when it comes to his suffering.

Yes, it’s a harsh scene, but a necessary one, and a round of applause for the writers for having the courage to play it out. Kevin meets Randall at his car and announces he is having a son and daughter and asks for advice on raising a girl. The brothers do not kiss and make-up but Randall does give him a few pearls of wisdom. On the drive home, Randall calls Dr. Leigh and announces he would like to switch to a black therapist so he can fully talk about all the emotions he’s buried inside himself. 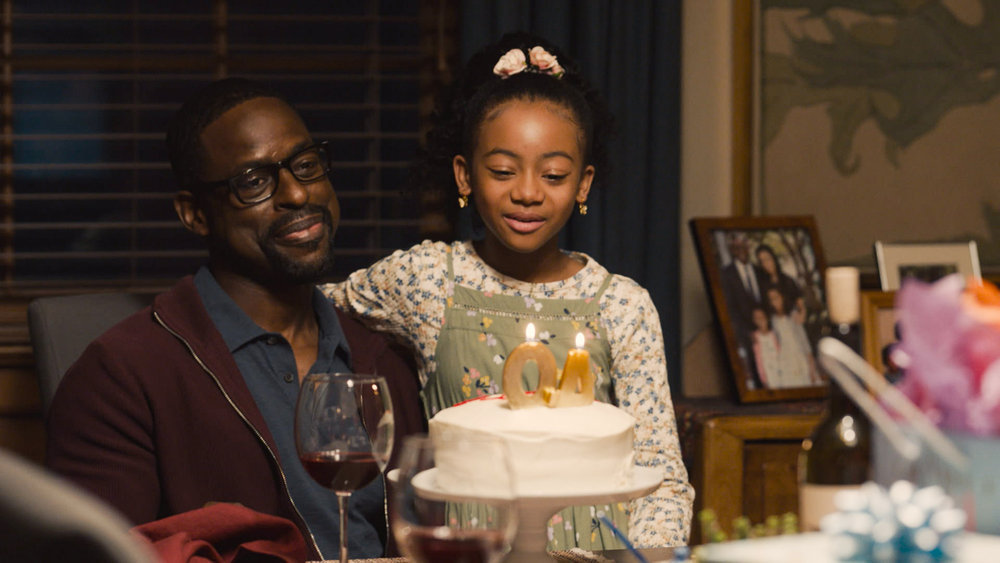 We’re also learning more about Laurel and William. Laurel had big dreams for her unborn child, including a promotion and a two-bedroom apartment. But as her pregnancy progressed and the promotion went to someone else, doubt set in. Worried about her ability to be a good mother, and the possibility of using again, she makes William promise if she can’t do it he’ll make their child a family. The baby is born and she talks William into getting her drugs to take the edge off. He does and then finds her lifeless body in bed the next morning.

Afterward, William takes off and leaves the baby at the fire station. But then he heads to the hospital and finds his son safe and sound in the nursery. He goes to the chapel and asks God to find his son a good home. As he leaves he crosses path with Jack, who is there to ask God to spare his wife. William and Jack not only crossed paths, but God answered both their prayers. Is it too late to mention that you’ll need a box of tissues to get through this episode?

Back to the present day and we see both birthday parties unfolding. Everything is peaceful until Randall admits to his wife that he’s not having a breakdown but he is sad. And here I will quote Beth Pearson directly because she always knows exactly what to say. “You were born out of tragedies. Multiple tragedies. All that loss. All that sadness. Look right here in this room. Look what you did with all of that. Do you see it?”  And one more little nugget from Beth: 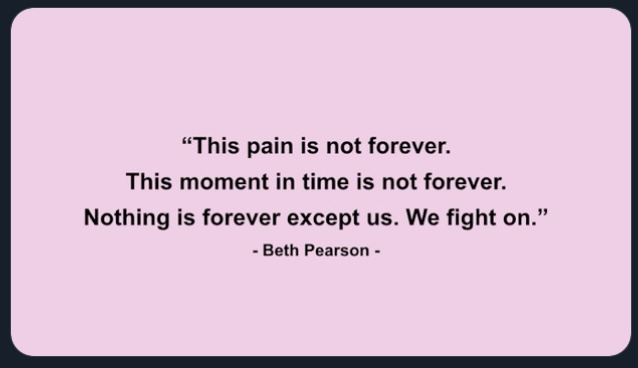 Randall and Beth share a moment but then one dares to say here’s to a year with no surprises. Okay, but isn’t that like announcing a no-hitter in the ninth inning. Tempting fate. You should really know better by now than to say things like that. Because as the show draws to a close we find ourselves back in time at William’s apartment. Laurel has been pronounced dead. And as the other paramedic notices William is gone, the other one detects a faint pulse, and Laurel gasps for breath. Yup. Randall’s biological mother survived! What did you think of This Is Us 5×01 and 5×02? Find and follow us on Twitter @capeandcastle to let us know all your thoughts! Check out our site for more articles on all things Disney and beyond!