‘The Mandalorian’ Season One Recap: Chapters 7-8

T-minus two days! New Disney+ content of The Mandalorian is on the horizon, but before the big premiere, we continue to look back and reflect on the events of season one. At the end of Chapter 6, we last saw Mando and Baby Yoda traversing the galaxy after reversing a betrayal by his mercenary “pals” to place him behind bars in a New Republic prison.

If you’re like us, you feel deprived of the Child content after the last episode. Thankfully, the plot of this one centers solely around the fate of the Child. Mando receives a hologram message from his former Guild leader Greef Karga, as we feel the intensity begin to amass. He has a proposition for Mando—kill the Client and the Imperial forces that have overtaken Nevarro, and the gunslinger can keep the Child.

Leery about taking on this mission alone, Mando tracks down Cara Dune to recruit someone loyal on his side to help him protect the Child. While Mando fills Cara in on his dealings with Greef Karga, the Child’s curiosity-induced button pressing causes the ship to go berserk. Mando makes an unplanned stop to recruit the Ugnaught Kuiil to help with the babysitting. Also joining the team is another droidified Taika Waititi IG-11, whom Kuiil has modified to change his nature from a hunting assassin to a protective butler. Remembering how the IG-11 from the first episode tried to kill the Child, Mando is a wee bit antsy about the droid tagging along. Mando seems to have a problem believing in the power of redemption and the ability of someone to change “their nature,” perhaps himself doubting that he is anything more than a heartless mercenary. 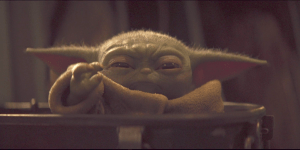 During the flight to meet Greef Karga, the Child proves himself to be the most dangerous among them by Force choking Cara in an innocent attempt to protect Mando, who she was arm-wrestling. The Razer Crest descends on Nevarro, where Greef Karga and Mando approach each other with their crews. Greef Karga and his bounty hunter posse chat with Mando’s gang about the plans for the mission. Suddenly, giant bat-like creatures swoop down, fatally injuring Greef Karga in the aftermath. Cara attempts some first-aid, but the poison spreads too fast. However, just before it’s too late, the Child saves his life with the first clear demonstration of Force healing in the Star Wars universe.

Taken aback by the power of the Child, Greef Karga double-crosses his bounty hunters, killing them and admitting that assassinating the Child was the original plan but has changed his mind about following through with the murder after the Force healing incident. They form a battle plan that involves Mando, Cara and Greef confronting the Client with an empty cradle while Kuiil and the Child ride back across the desert toward the security of the Razor Crest.

The Client delivers a sermon about the Empire’s glory, declaring that the Rebellion only brought death and chaos into the world—not peace. DJ from The Last Jedi would agree with this sentiment, emphasizing the idea that war is an endless cycle of, “They blow you up today; you blow them up tomorrow.” The Client receives a hologram message from Moff Gideon, who informs the Client that the Child is not with Mando. Mando, Cara and Greef instantly switch into a trigger-happy mood, taking out the Client and his forces, only to realize that Moff Gideon and his battalion of shadow troopers and stormtroopers have them hopelessly surrounded outside the building. Overcome with worry for the Child’s safety, Mando urges Kuiil to depart from Nevarro with the asset. Two stormtroopers on speeders overhear Mando’s message, leading them to Kuiil, where they slay the Ugnaught and take possession of the Child.

The stormtroopers speed away with the Child and halt on the outskirts of town to nonchalantly await Moff Gideon’s command. Now in a bag, the trooper whacks the Child, instantly becoming the main villain of the show—at least our eyes. In one of the most triumphal moments in the show, the Child gets revenge by biting the trooper. Immediately after, Kuiil’s modified IG-11 makes a surprise entrance, taking out the troopers and retrieving the Child.

Back inside the city, Moff Gideon sets up a repeating blaster outside, leading Mando to spearhead a new plan to enter to sewers and find the Mandalorian refuge colony. During another villain sermon, this time by Moff Gideon, we learn the name of Mando—Din Djarin. Gideon suggests “peaceful negotiations” that involve giving Mando and the gang until nightfall to comply or die. Qui-Gon would disapprove of Moff Gideon’s long negotiation strategies. Gideon’s reveal sacrifices his anonymity, as his knowledge hints that the Imperial governor was a noted Mandalorian purge participant.

After explaining that the Mandalorian clan isn’t a race but a creed, we revisit Mando’s full childhood flashback. We see the young Din Djarin being rescued from imminent death and carried away in the arms of a Mandalorian. Mando explains that the clan raised him as their own. Because Mando and the gang are still alive, he conjectures that the Child safe and touches base with IG-11, who is busy lighting the city on fire with his blasters. He clearly didn’t hear the conversation about peaceful negotiations. Greef and Mando attack soldiers outside while Cara covers, but Gideon triggers an explosion that severely injures the gunslinger. Cara drags him back inside, as Gideon commands his troops to burn them out of the building. 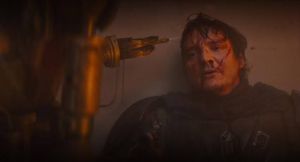 Thankfully, Mando can be saved, but there’s a problem—they have to remove his helmet to assess the damage. The Child buys the group some time by blocking the flametrooper’s fire with the Force, allowing Cara, Greef and the Child to escape into a grate that IG-11 managed to open. IG-11 stays with Mando in an attempt to heal him. Mando threatens to kill the IG-11 if it removes his helmet, but the droid insists it is not a human, and therefore, Mando isn’t breaking his Mandalore code. IG-11 removes his helmet to reveal the bloody face of Pedro Pascal, giving us our first face reveal. IG-11 uses a medical mist to heal Mando, and he rejoins Cara, Greef and the Child in the sewers.

Upon reaching the colony, they find the hideout stone-cold empty, with nothing but some armor on the floor. The Armorer reveals herself as the last Mandalorian on Nevarro after an Imperial attack. The Armorer refuses to join them on their quest but declares Mando is the foundling’s father until he delivers it to its people—who Mando refers to as enemy sorcerors—or comes of age. She engraves the Mudhorn signet on his pauldron to symbolize their bond and bestows a jetpack upon Mando. Staving off a group of stormtroopers, the Armorer buys Mando and the gang some time to escape down the lava river. 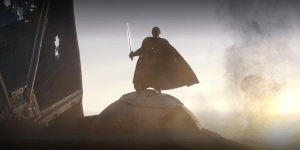 After Mando sees a platoon of soldiers flanking the mouth of the river, IG-11 sacrifices himself for the group by self-destructing. Now in Mando’s final boss level of season 1, Gideon pops in on a TIE fighter. Waiting until Gideon flies over the gang, Mando uses his jetpack to rocket into the sky and latch himself to the TIE, and blows it up with an explosive. Assuming victory, Greef and Cara decide to stay to protect Nevarro and return it to glory. The gang says their goodbyes, and Mando heads out with the Child to return him to his people. The last shot of the season ends with Moff Gideon cutting his way out of the TIE fighter with the Darksaber, guaranteeing more appearances to come in season 2.

Make sure to look out for more of our content on The Mandalorian soon! What were your favorite moments in chapters 7-8? Let us know @capeandcastle on Twitter! Be sure to check out our site for articles on all things Disney, Marvel, Star Wars and more!