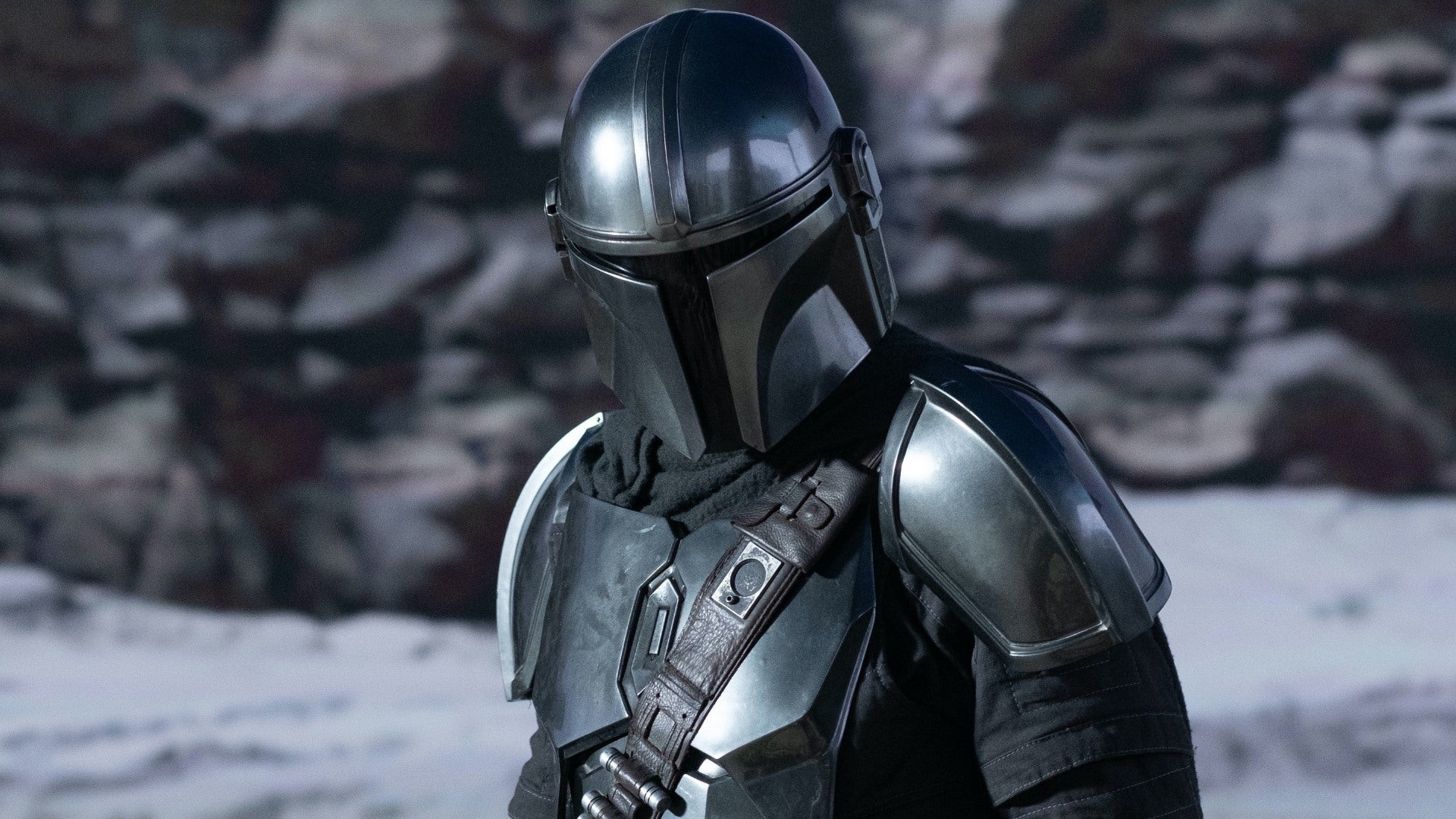 ‘The Mandalorian’ Season One Recap: Chapters 4-6

The Mandalorian is back in three days—and we’re building on the hype with another season 1 recap! When we left Mando at the end of chapter 3, he had just broken Baby Yoda free from the Imperial loyalists’ questionable daycare, and his journey only gets more intense from here!

Opening on a planet teeming with vegetation, we finally get a change of pace from blank landscapes. A peaceful day in the life of some villagers quickly goes awry when Klatoonians henchmen of the bounty hunters, besiege them, causing a mother to hide her daughter in the river. After the title sequence, we blast back to Mando in the Razor Crest, where the Child’s mischievous button pressing continues.

Conscious of the danger he in with hundreds of tracking fobs still blinking, Mando decides to lay low for a while. He and the Child waltz into a tavern where the ex-Rebel Alliance shock trooper Cara Dune eyes him curiously and disappears. Mando follows her, making the questionable parenting decision to leave the Child at a table. The search ends in the two trading some blows, while the ever-wandering Child spectates and sips his soup. The clear beginnings of a foes-to-allies storyline, Cara Dune spills her militant backstory and then demands that Mando leave the planet, as it’s not big enough for two pursued desperados.

Before Mando boards his ship in search of a new hideout, two villagers from the opening scene approach him, seeking a mercenary to protect their people from the Klatoonians. Though the sum they have to offer is glorified lunch money, Mando excepts under the conditions that the village is in the middle of nowhere and can offer shelter. Mando immediately finds Cara Dune and recruits her to join in on the mission.

Running up the hospitality department of the village, the mother from the cold open, Omera, falls prey to the allure of Mando’s mysteriousness. Omera’s curiosity provokes her to inquire about Mando’s lifestyle, particularly about the constant concealment of his face behind his helmet. Showing unlikely vulnerability, Mando reveals that the Mandalorian people adopted him after his parents died.

After Mando deems the village competent enough in the arts of fighting, they tuck the children and the Child away while Mando and Care Dune ambush the Klatoonian camp. The two bait the AT-ST back to the village, where a villager-dug moat awaits. However, the AT-ST seems to have read their playbook and refuses to walk forward any further. The villagers use their guns to stifle the Klatoonians, while Cara Dune takes the AT-ST in a one-on-one battle and lures the walker into the water. Mando finishes the AT-ST off with an explosive, and the Klatoonians retreat.

After the battle, Cara Dune playfully goads Mando with the hypothetical scenario of him settling down with Omera and leaving his bounty hunting and Mandalorian creed. Changing the subject, Mando decides to leave the village as word of the battle will spread. Talking to Omera, Mando reveals that he cannot stay but will leave the Child, who has found happiness among the village children. Omera attempts to remove Mando’s helmet, but he gently stops her. Right as we are trying to process Omera’s heartbreak, chaos ensues at the edge of the forest, where Cara vanquishes a bounty hunter in an assassination attempt of the Child. Knowing the bounty hunters can track the Child anywhere, Mando reclaims the Child and sets out on the road again.

Can Mando and the Child have one peaceful journey? Please? Apparently not! In the cold open, Mando is under heavy fire from another ship. Mando weaves the Razor Crest with piloting skills that would outsell even that of Poe Dameron and blows his opponent out of the water—or out of space, we should say. Sustaining damage to his ship, Mando makes an unplanned landing on a nearby planet—Tatooine.

After securing the Child in the Razor Crest, Mando leaves his ship with the mechanic Peli Motto to work and bans her from using droids. The Child once again wanders, taking a nice stroll out of the ship and meets Peli, who gladly takes on the role of babysitter. Out to look for non-Guild related work, Mando crosses paths with Toro Calican, a bounty hunter with an initiation puck that earns him acceptance in the Guild upon delivery of the feared mercenary Mulan Fennec Shand. Mando accepts Toro’s recruitment letter under conditions that the titular gunslinger keeps the monetary reward.

Back at the ship, Peli Motto rats out Mando for his questionable-at-best parenting skills before meeting Toro to begin their mission. We’re getting the feeling that this Toro is in a little bit over his head that appears to be very, very large—and Mando does too. Assuming the position of mission leader, Mando guides Toro through his strategy, which is intercepted by Fennec, who ambushes them. Changing the game plan, Mando and Toro lay low and postpone their attack until sundown.

After we suffer from second-hand embarrassment during Toro’s attempt to wake Mando up, the sun finally sets, and the two use their speeders to race at Fennec, using flare blasters to blind her scope. Mando gets hit, but his Beskar armor protects him. Toro and Fennec wrestle each other to the ground, provided a distraction until Mando arrives to ensure her surrender. Mando goes to retrieve a dewback he saw earlier for transport, while Toro watches the captive.

At dawn, Toro cracks under persistent manipulation from Fennec, who informs him that bringing in Mando, a Guild traitor, would earn him a high spot on the ladder than taking her in. Adhering to Fennec’s advice but not trusting her, Toro kills her, knowing that the captive would do the same to him if he released her. Mando returns to the now Toro-less crime scene, where Fennec’s dead body is evidence of the Guild-wannabe’s hoodwink attempt.
Heading back to Peli Motto’s repair shop now turned daycare, Mando finds Toro holding Motto and the Child hostage. Killing Toro, Mando pilfers the bounty hunter’s credits and bestows them upon Peli as payment for the repairs. Mando and the Child blast off to traverse the galaxy, but the last scene brings us back to Tatooine, where mysterious footsteps approach Fennec’s dead(?) body.

Mando and the Child are still at large, but that doesn’t stop the gunslinger from firing up his resume. Pursing another job, Mando pays a visit to his old pal, Ran. Mando refuses to answer Ran’s inquiries about what happened between the rogue mercenary and the Guild but still answers him a job. The Razor Crest is the final touch on Ran’s blueprint for the mission as the crew plot to rescue one of their friends from bondage. One of the crew members, Xi’an, a coquettish Twi’lek, insinuates that she has a past with Mando, creating awkward tension.

The crew chooses the droid, Zero, as the pilot for the mission to the disgust of Mando, who learns that the captive in question is a criminal on a New Republic prison ship. During the flight, The Devaronian, Burg, accidentally opens the compartment concealing the Child, but the crew fails to suspect foul play when Mando waves off the asset’s presence as nothing more than a pet.

Zero leads the infiltration into the prison, but they hit their first roadblock when Burg shoots a droid, alerting a band of them to the crew’s presence. They manage to find their way into the control room, where Xi’an kills Davan, a New Republic soldier. Though, Davan, who was carrying a tracking beacon, activates the distress signal before Xi’an’s knife can finish him.

With 20 minutes until the New Republic shows up, the prisoner is revealed to be Xi’an’s brother, Qin, who has bad blood with Mando after the protagonist left him behind in a past mission. The crew conspires to trap Mando as a prisoner in Qin’s cell, but they ultimately fail as he makes a quick escape. Mando returns to the control room, where he cuts the power and conceals the doors, forcing the crew to split up.

Only once they are separated do we see that this crew is bound together more by bitterness and revenge than true loyalty. Taking the crew members individually, Mando goes for Burg first. Mando sustains some heavy blows—almost causing our first helmet reveal—before the gunslinger closes the control room doors on the Devaronian. Xi’an is next up in the batting order, who goes with a Mai from Avatar: The Last Airbender knife throwing approach. Xi’an and Mayfield, the former Imperial shooter, are no match for Mando, who finishes off the inning against Qin, who surrenders outside the Razor Crest.

Mando arrives on board in time to destroy Zero before he can shoot the Child who—once again—wanders out of his hiding spot. The gunslinger returns Qin to Ran’s base ship, who orders Mando’s death knell. Though, Mando is all his cleverness sneaks Davan’s distress beacon into Qin’s pocket, leaving Ran and the Twi’lek’s fate in the hands of three X-wings.

Be sure to look out for a recap of chapters 7-8 of The Mandalorian tomorrow and check out our site for articles on all things Disney, Marvel, Star Wars and more! What were your favorite moments in chapters 4-6? Let us know @capeandcastle on Twitter!