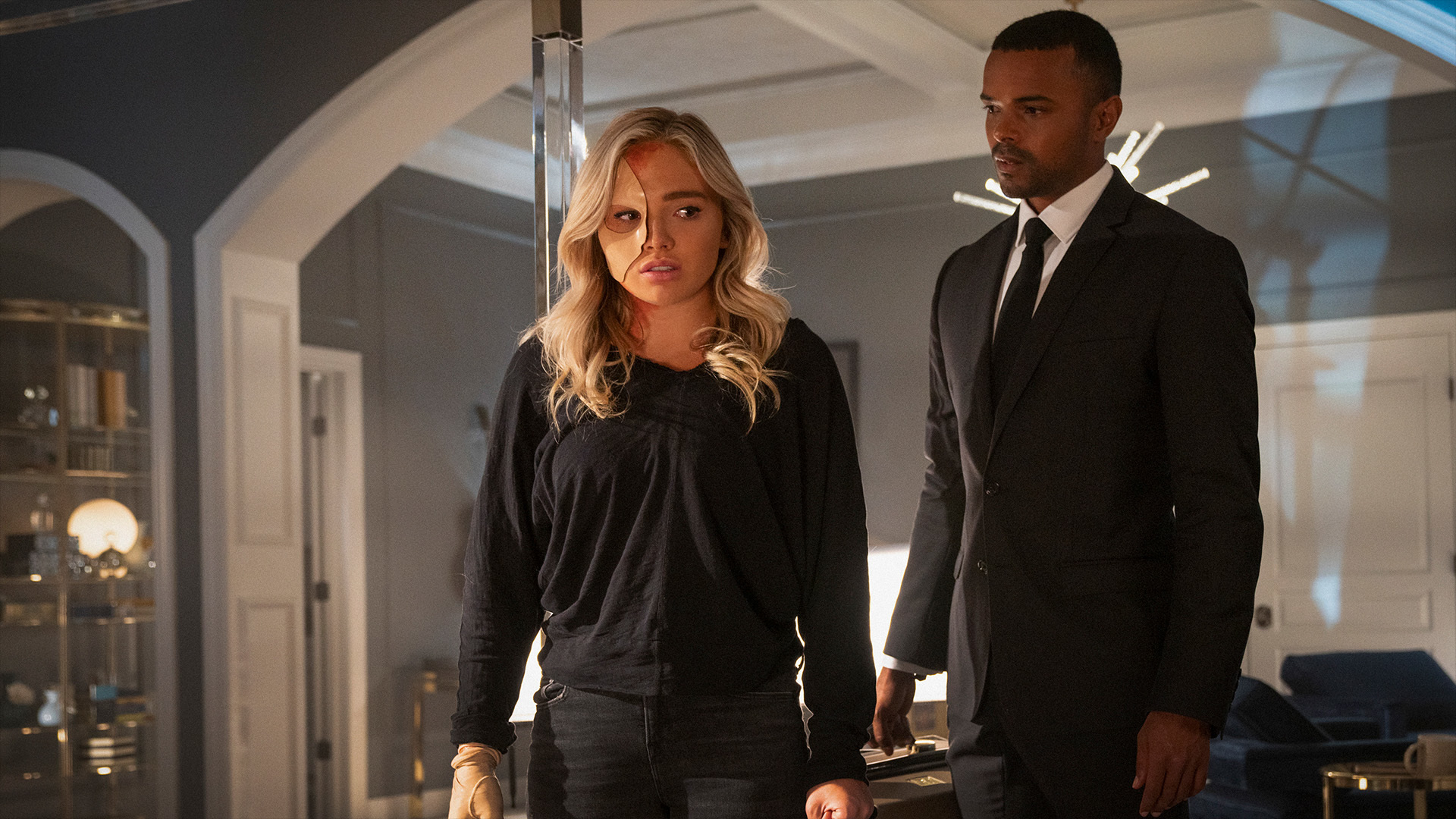 Last week on Tell Me A Story (review here), we got a glimpse at the three fairytales we’ll be taking a wild and dark ride with: Cinderella, Beauty and the Beast, and Sleeping Beauty. This week, the tales didn’t wait to test the water but jumped right into the deep end of their tales. Tucker goes too far, following his muse, Olivia. Simone stirs up trouble with her stepmother at her father’s wake. Ash and Beau grow close when she strives for an ounce of freedom.

TMAS didn’t start out subtle but with bluntness when Beau (Eka Darville) was pulled over by a former co-worker/police officer that breaches the code of conduct and nearly pulls a gun on him. This intense, breath-holding moment really has us wondering even more what Beau did. His morning grew increasingly worse when he ran into Ash that morning and she all but rips into his throat with her teeth.

He gets a chance at redemption when Ash (Natalie Alyn Lind) tries to make a break for it out the back door. I believe this is the start of something beautiful. Their connection at this moment they have alone offers a rare moment for Ash to share her fears and worries while Beau shares that she should stay true to herself and not what the music label wants. Much like Beauty and the Beast, the two are able to grow one step closer though they’re both feeling pretty trapped.

This week, the arc took a more heartfelt and emotional turn that really opened up each of the main characters, allowing the audience to see at least a sliver of who they are. That’s got to be one of my favorite moves from this show. They don’t lay all of their cards down at once, but little by little, keeping it intriguing. The fear of losing one’s self and their integrity was a major subject. Being able to have people to rely on that support you and only want to lift you up rather than twist you and deflate you is important.

Initially thought that Cinderella would keep her glass slipper out of the prince’s hands, that was squashed during this episode. Jackson  (Matt Lauria) awakens after his drunken night to discover Simone’s (Ashley Madekwe) charm bracelet that must’ve fallen off when she helped his drunken self to bed. The perfect fairytale connection? It has a shoe charm.

Simone attends her father’s funeral where her stepmother and stepbrothers-who are creepily in sync but not-greet her. One of the brothers is kinder than the other for sure, but the lot of them are sneaky and devilish, much like the fairytale itself. A visit from her godmother makes everything better. The two discuss her father’s death and Simone admits that it doesn’t make sense and thinks it was murder.

However, when words fly between Simone and her stepmother, both come across as questionable and shifty.

When Jackson shows up at the end of the night, she’s in no mood to deal with him. That changes when he holds up her charm bracelet in which she decides to let him in and in more ways than one. This Cinderella doesn’t play by the good girl rules.

Tell Me A Story via Tumblr

Olivia’s (Danielle Campbell) cat is officially missing which is the most devastating part of this week’s episode of course. And that’s just the topping on the cake of other shitty things that have her life crumbling. She’s ready to pack up and move back to Oklahoma. Tucker (Paul Wesley), sitting a few tables away, a rank, scruffy mess is lapping it up, taking notes down for his book. His utter joy about it while also being the one responsible for Olivia’s cat disappearance and the miserable outlook she has on life at the moment is disturbing. It’s also destroying his relationship with Maddie (Odette Annable) before they even approach the altar to get married.

Tucker is one sneaky creep. Like damn, Paul, I didn’t think you were capable of such unnerving discomfort. Stealing Olivia’s cat and then pretending to be the guy that brought her back, is one hell of a move. Then again, Olivia should’ve been more aware of herself rather than being so trusting. She wouldn’t have ended up in the basement of his writing retreat as his new trinket/pet.

Each arc dove right into the twisted tales rather than taking it slow like last season. It really grabbed my attention quicker that’s for sure, However, I had a great appreciation for the slow going storylines of last season because that allowed me to make the connections and read between the lines in a much more unique way, but this season has been more obvious. So far, I’ve been successfully disturbed and I enjoy a show that can get under my skin. This season also feels darker than the precious one. Sure, the traditional tales are pretty dark, but the modern twist really gives them a brand new flare. And, with them really getting hot and heavy so soon, I can’t wait to see what they bring later on. Will it get more intense or deflate too soon? We shall see.

One thing is for sure, the performances have truly brought these tales to life in a way that is both exciting and unnerving and that’s the kind of height of emotion that keeps me invested. Truly phenomenal so far.

What did you think of this week’s episode? Let’s chat in the comments below and don’t forget to follow us @capeandcastle on Twitter to keep up with other shows you love.