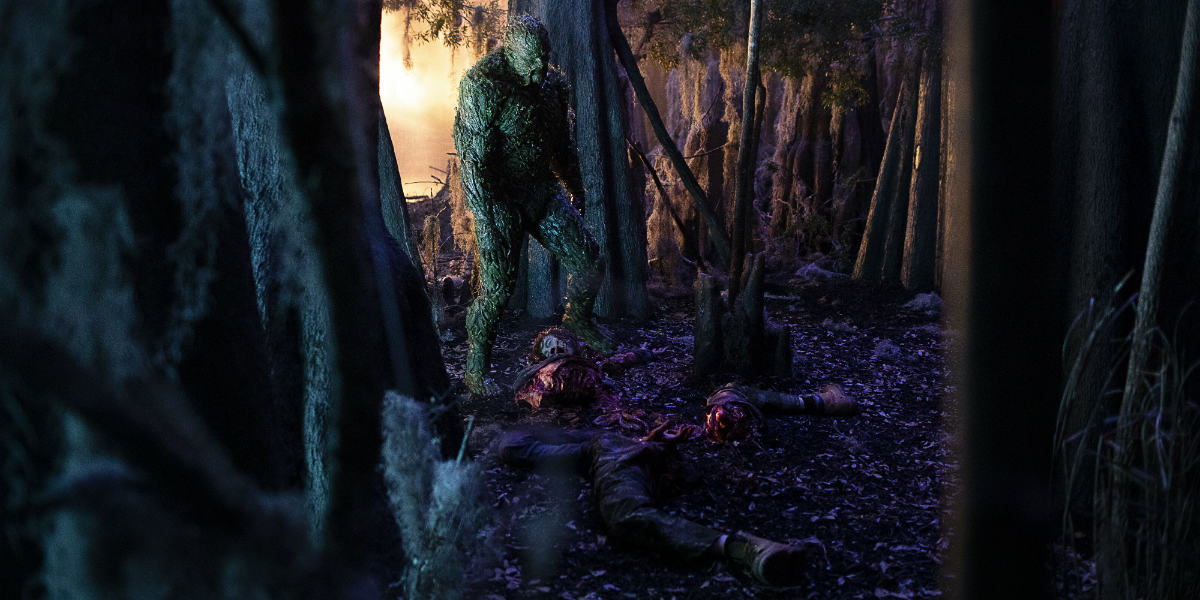 Last week on Swamp Thing 1×02 (review here), Abby went on the hunt for Susie after she escaped the hospital and came face to face with Swamp Thing. This week, she is racing against the clock to find a cure against the disease threatening to kill people while Swamp Thing battles his guilt.

Swamp Thing doesn’t take killing somebody lightly and the beginning of this week’s episode showed that clearly. Alec’s conscience is still very alive. The recent man he killed strangling him with guilt showed that, but it’s not as if that guy didn’t deserve it.

Yet, the guy getting reanimated into something horrifying with bugs was not what we expected. Swamp Thing must handle it fast before it kills Abby. He needs help figuring himself out and she may be able to do that.

The expression of guilt in Swamp Thing not only showed the humanity within him really proving that he isn’t a monster. Simply, like the creature of Dr. Frankenstein’s making, confusion and fear within Swamp Thing consume him but doesn’t fully take him over. It goes in the opposite direction. Rather than let himself be consumed he is reminded continuously of who he was and is. 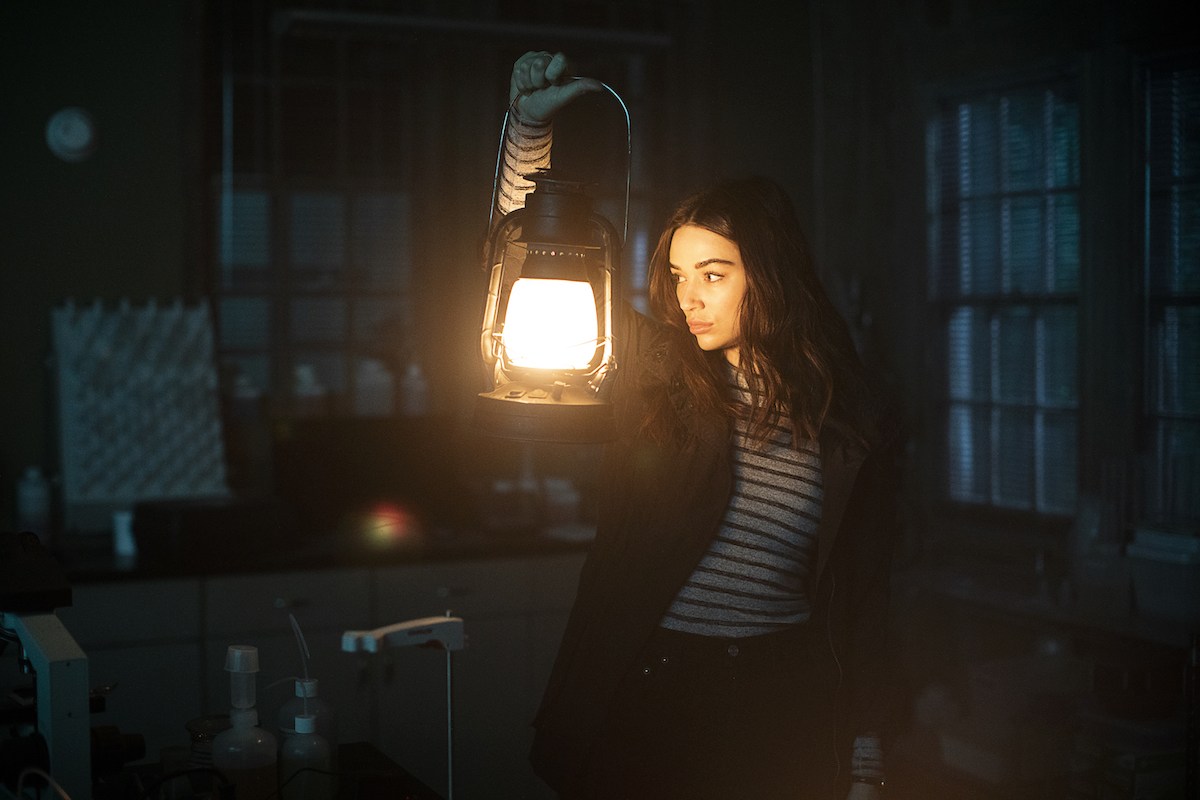 On top of trying to handle coming face to face with Swamp Thing, she is called to the hospital when the CDC sends in reinforcements and Avery sends in Jason Woodrue to walk overall for the work she’s done with the disease. To add even more to her stress, her friend, and also team member, Harlan becomes ill.

When she goes looking for answers in Alec’s lab she comes across unexpected visitors. The thing that Swamp Thing accidentally reanimated from guilt found her and Swamp Thing himself. It leads to a quaint moment. It was in the lab that Abby and Alec bonded and grew close, and it’s there that Abby reconnects with him and Swamp Thing. This has to be my favorite scene. She didn’t see him as a monster and didn’t run away. Her curious nature really gives her an edge in situations like this. 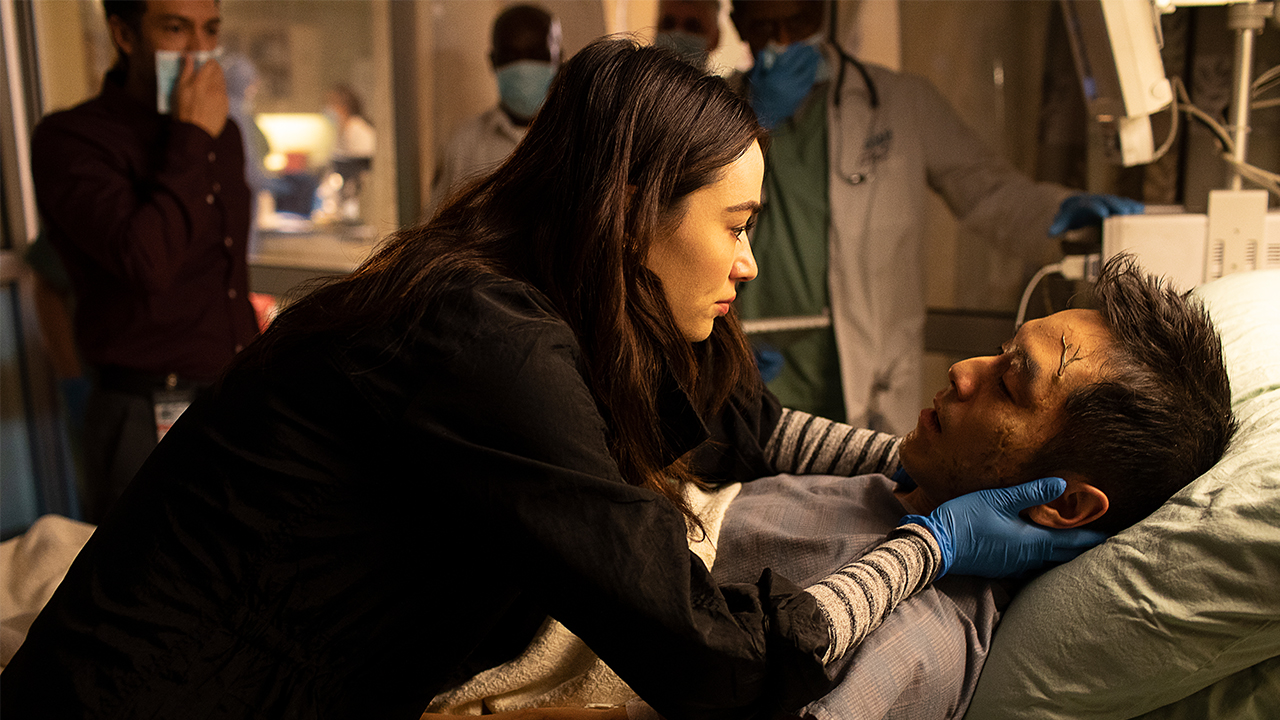 With his help, Abby is able to save Harlan and everybody else that is sick. This arc in the episode really got the blood pumping. Suddenly Abby had so much to worry about a little time to do anything, and while it came across reckless, risky, and unbelievable that she’d know what to do so quickly, I clung onto her intelligence and ability to think on the fly and accept that in the world of the strange and unexplained there will always be surprises. And as always, her compassion to cross whatever line she has to for others truly makes her shine.

And yeah, secretly we’re sure she’s thanking Swamp Thing as he did give her an idea of how to fix this. More than anything, this is only the beginning of a complex and unique relationship. I certainly can’t wait for more!

Liz on the Hunt

Liz is searching for whoever is doing dirty work out in the swamp. From the waste dumping to Alec’s mysterious death. She’s looking to blow the whole thing wide open. I love a woman with a thirst for the truth. Though this is only the beginning, she better be careful. This job doesn’t just make enemies, it puts lives at risk, including her own. Of course, Liz can take care of herself. That much is obvious. That doesn’t stop the occasional moment of worry that this instant character favorite might bite it way too soon. However, knowing she’s one badass bitch, I look forward to seeing her drag down the big bad monster of Marais, Avery Sunderland.

The Twisted Marriage of the Sunderlands

You really have to wonder about the Sunderlands during this episode. One of them is committing illegal acts of dumping, stealing, and even murder. The other is in contact with their dead daughter and holding a grudge against Abby Arcane. With all of the shade between those two and how they use each other, I have to wonder if they’re meant to be or meant to kill each other.

All I know is that this toxic marriage needs a lot of therapy. It’s only episode three and I can’t imagine what’s to come next from these two. I just hope Abby doesn’t get too close and get sucked into their vortex of darkness, even though I’m completely enthralled by it.

A jam-packed episode with several different strings crossing over each other, I can’t wait to see them connect. Intrigue and chills are around every corner in Marais and more and more keeps getting unveiled, revealing that a lot gets lost in the swamp but so much comes to its surface.

What did you think of this week’s episode? Let’s chat in the comments below and don’t forget to follow us @capeandcastle on Twitter to keep up with other shows you enjoy.