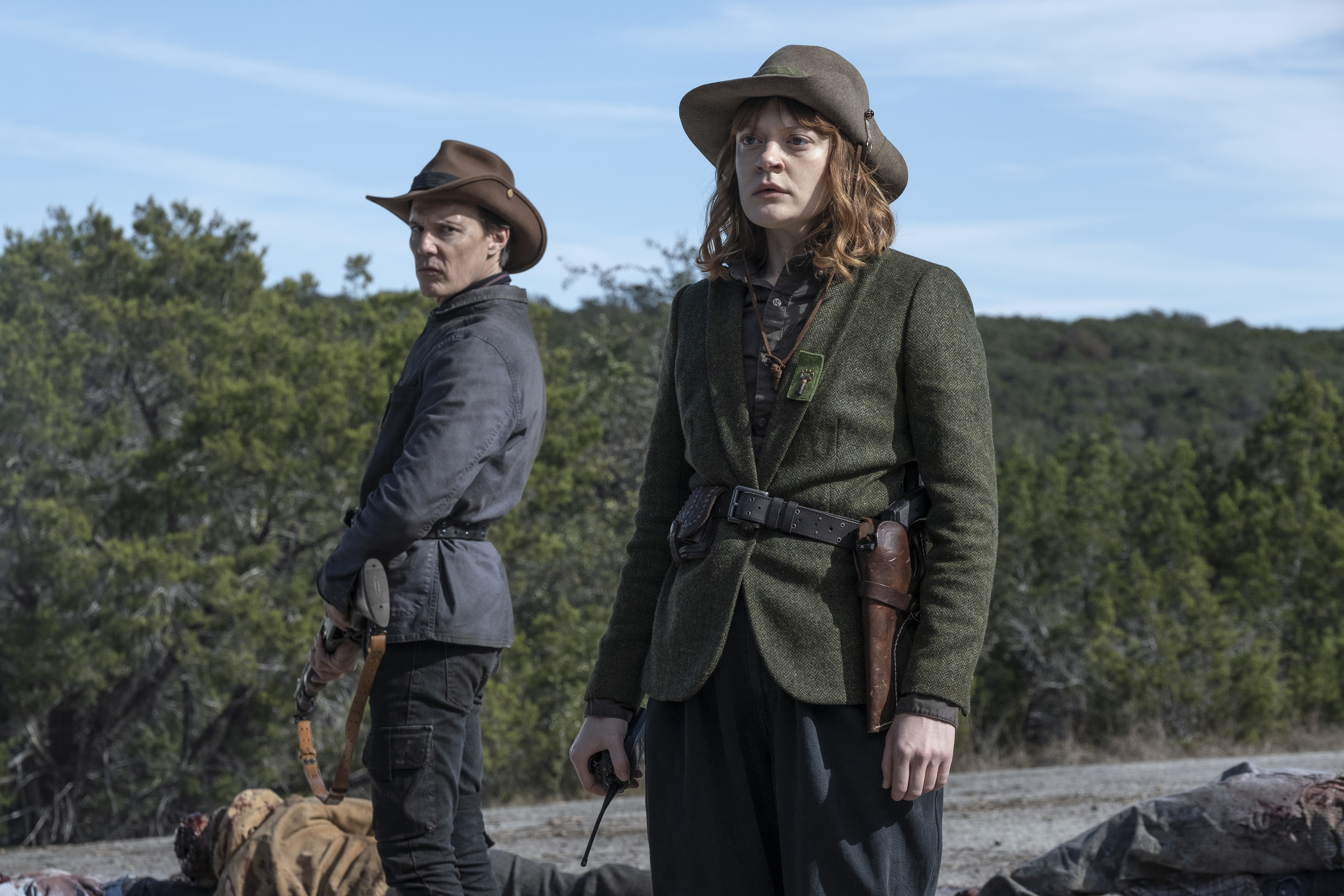 We met a bounty hunter and hated him. But we were glad that we didn’t have to deal with him for very long. But we also met a man who was willing to do anything to protect his family. And we wish he would have hung around for a lot longer. It would have been nice to get to know him. Morgan is still fighting with everything he has, even though he doesn’t seem to have a whole hell of a lot left at the moment. But one thing was for sure, this season was off to an exciting start and we can’t wait to see what comes next! So keep reading for our Fear the Walking Dead 6×01 review!

Wow! That bounty Hunter did not give us a good impression right from the start. That dude was a tad terrifying. Maybe it was because he seemed to enjoy chopping heads off. He was clearly a force to be reckoned with and we were a little uneasy about him when the season premiere kicked off. We certainly weren’t in his favor when Ginny hired him. Anyone in contact with her certainly can’t be trusted and isn’t going to be on our good list. But who the hell would want to be a bounty hunter during this time? As if there isn’t going to be enough killing with walkers all over the place. Why would you want to add killing what was left of humans? Maybe we’re overthinking it and the dude just enjoys killing and likes the perks. 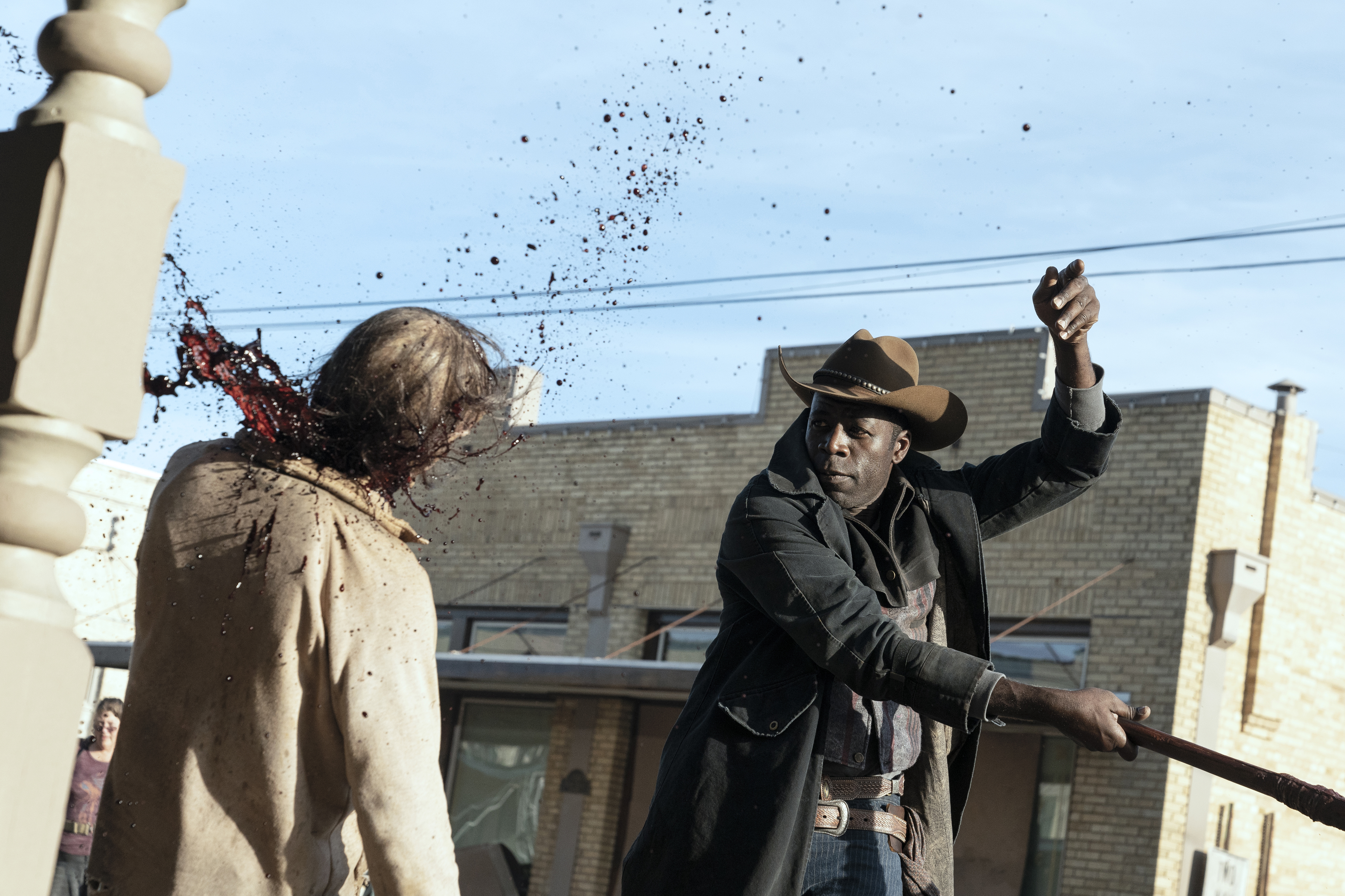 Whatever his motives or reasons were, we really enjoyed watching Morgan kicking his ass. Using only one arm and in immeasurable pain, no less. Okay, so he didn’t completely kick his ass at first. But he had a real good groove going there for a while before the hunter turned the tables for a bit. Thankfully, this is Morgan we’re talking about and he always finds a will and a way to survive. No matter what or who gets thrown at him. This meant that Morgan was able to regain the upper hand and come back at him in a way the bounty hunter clearly didn’t expect. And, wow. WOW. It was ridiculously satisfying watching Morgan chop the dude’s head off with his own ax. Well done, Morgan.

We don’t blame Morgan one bit for not wanting to know Isaac’s name or anything else about him. For not wanting his help. He’s lost more people in a lifetime than anyone should. And in some pretty violent and gruesome ways. Plus, he isn’t doing too well health-wise himself. So not wanting to get attached or meet anyone makes a hell of a lot of sense to us. But Morgan is also in a position where he doesn’t have a lot of options. Unless he just wants to give up the fight and call it quits. Which we all know damn well he doesn’t want to. No matter how much Morgan says he’s at the end of the line, we know he isn’t going to give up.

Besides all that, strangers don’t always have a way of being trustworthy in the Walking Dead world. Isaac pursued Morgan pretty hard. Even if Morgan wasn’t injured as badly as he was, he still would have been wary of Isaac. And that’s because Isaac could have been anyone. And it doesn’t pay to take everyone at face value. Not around here. Not these days. Although, the compulsion to do whatever is necessary to get to your family is a strong one. Which made us inclined to believe Isaac. And we’re glad he turned out to be truly genuine and Morgan was able to help him out. He was just a dying man who needed Morgan’s help to protect his wife and baby.

It seems like Morgan just has bout after bout of bad luck. We were left worried for him in last season’s finale but had hope that he would be okay. Well, okay is certainly a relative term here since Morgan was hurt pretty bad by Ginny. The only good luck Morgan seemed to have was that a mysterious someone patched him up and left him barely hanging on. And while encountering Isaac meant that Morgan wasn’t alone for the moment, we aren’t sure that it could be considered good luck. Sure, he reluctantly helped Isaac but he was also forced to battle more walkers. Something he really wasn’t in the condition to be doing. But Isaac was able to help Morgan deal with Emile. And at least Morgan looked a hell of a lot better at the end of the premiere than he did in the beginning! 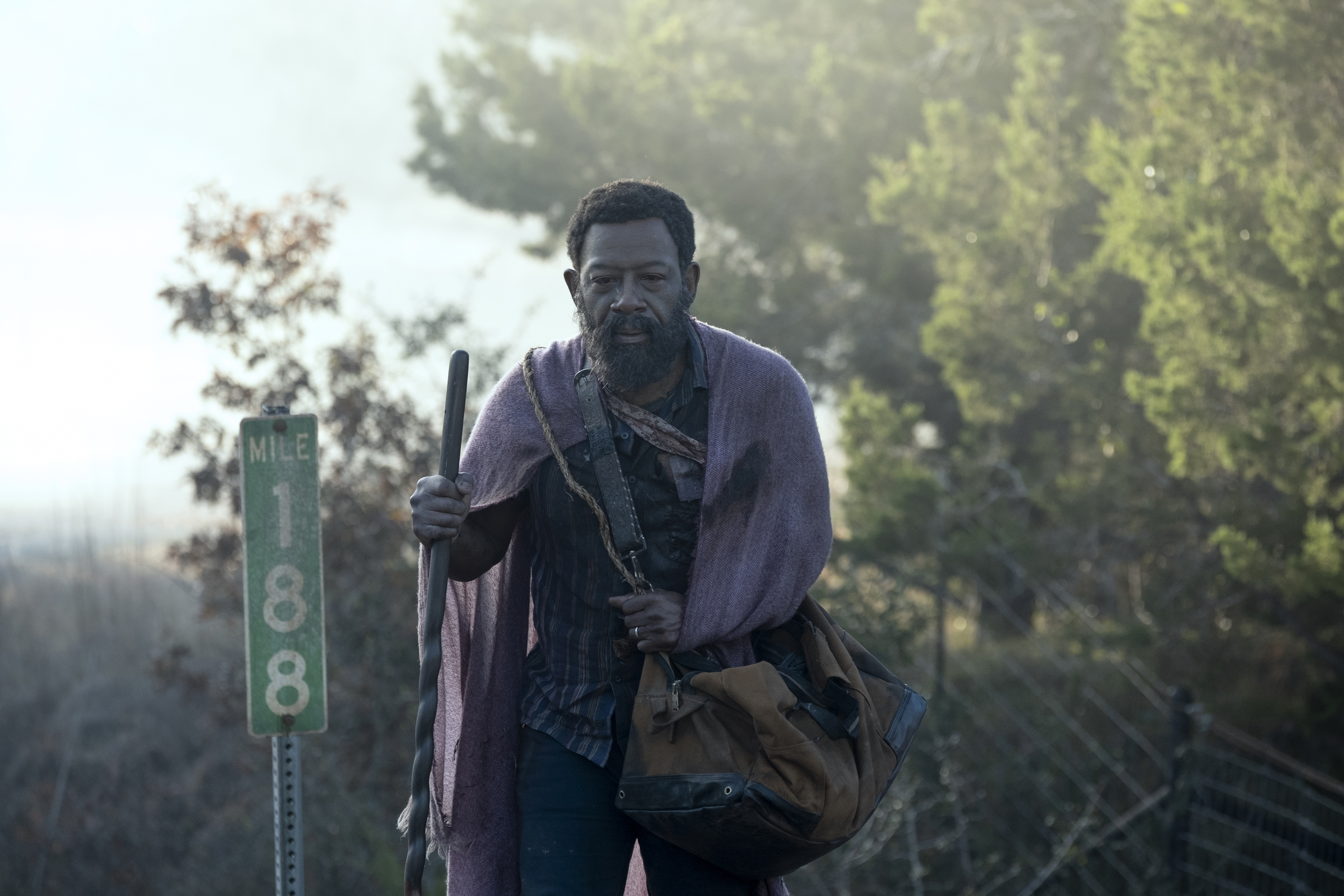 So if anyone deserves a little bit of quiet time, it’s Morgan. But we don’t think he’s going to get it. What did you think of Fear the Walking Dead 6×01? We thought it was quite the season opener! But are you wondering what’s going to happen to Morgan like we are? While we’re glad that it seems as if Morgan is going to be okay, we are still anxious to find out about everyone else. Find and follow us on Twitter @capeandcastle to discuss all things Fear the Walking Dead with us! Be sure to check out our site for more articles on all things Disney and beyond!