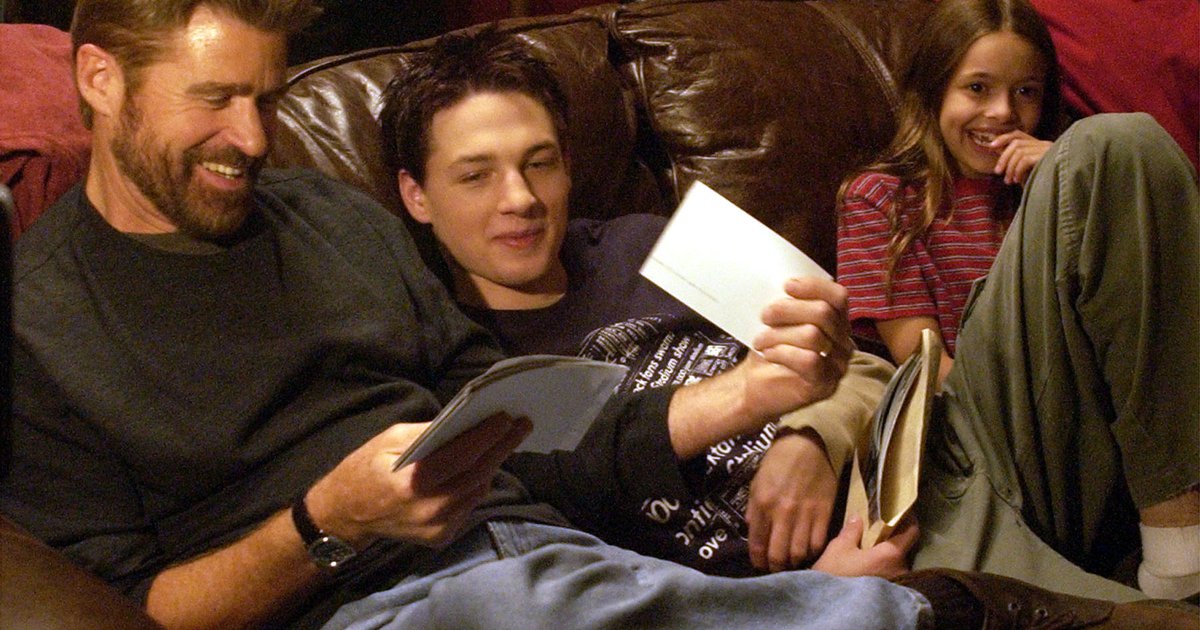 On September 16 2002 a show called Everwood entered my life. Within the first hour of the pilot, it became my comfort series and every Monday for the next four years I (im)patiently waited for 9 pm to be transported to a sleepy little town in Colorado. It’s a show that not many people have heard of but for those of us who have there is unconditional love. Trust me. We’re a passionate bunch. 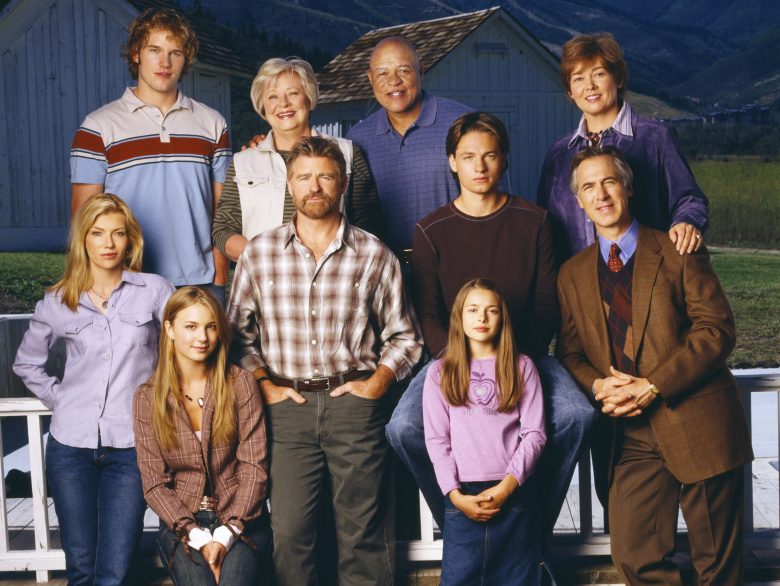 There are not enough words to describe what it is about this series that sparks so much devotion. The characters. The writing. The amazing cast. So I thought instead I would highlight a few of the things that made Everwood so special to me.

The premise of Everwood is fairly simple. After the death of his wife, world-renowned neurosurgeon Dr. Andrew Brown uproots his two children from their New York City life to a small town in Colorado called Everwood. Andy, however, is anything but a simple man. He’s a complex character with many layers and Treat Williams hits every note with perfection.
Andy neglected his family for the sake of saving people from inoperable brain tumors and impossible to reach aneurysms. His wife Julia’s death brings him to his knees and results in the radical decision to move his family. I won’t spoil it for those who haven’t seen the series, but there is a very touching reason why Andy chose that particular destination. He sets up his practice in the abandoned train station and offers his services for free, much to the chagrin of the local doctor Harold Abbott. Andy’s frenemy type relationship with Harold is a cornerstone of the series and they end up helping each other in a lot of surprising ways.

Andy’s story is not one of redemption. His heart doesn’t grow three sizes too big. Those stories are best left for Christmas. Through conversations with his son and the people Andy meets along the way, the introduction of characters from the Brown family’s life in NYC, and the careful use of flashbacks we learn who Andy is in the present is who he was in the past. The difference being the giant hole Julia’s death left in his heart, and his guilt over failing her as a husband that haunts Andy even as he attempts to move on and find love again.

The dedication Andy had as a surgeon is now applied to his children and patients with mixed results. He interferes in other people’s lives but always with the idea that he’s helping them. His ego gets in the way more often than not because he believes he’s always right. But it’s Andy’s humility that truly shines through when he’s confronted over his actions (usually by his trusted neighbor/friend/potential love interest Nina) and is able to (sometimes) set things straight. Andy, for lack of a better word, is a flawed hero.

In what can only be called perfect casting, Gregory Smith is a revelation as Andy’s son Ephram. Their complicated relationship is the foundation of the series. And when I say complicated I mean super-duper complicated.

You see, Ephram is his father’s son. But unlike his father, he lacks the humility and good grace to not oftentimes come across as an obnoxious jerk. Give him a break folks. When the series begins he’s a moody teenager with purple hair who not only has just lost his mother but finds himself in the middle of nowhere where you can’t even buy a decent bagel.

Ephram is a piano prodigy. This great gift of his, just like his father’s surgeon hands, is both a blessing and a curse. And much of that is tied to his mother who encouraged his talent and died in a car accident on her way to his recital, and his anger towards his father. The show never shies away from showing the downside of parenting a teenager. There are times Ephram is really hard to love, and times his anger is totally justified. He is also a teenager who just wants to do teenage boy things. Which leads us to the girl of his dreams. 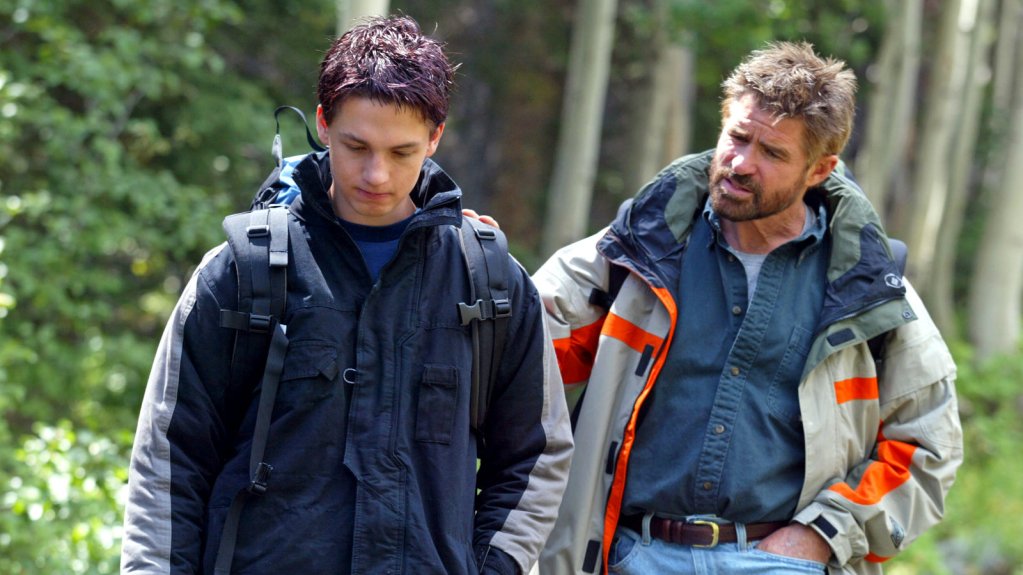 Ephram’s first day at Everwood High School is not a success. He ends up suspended after a fistfight with basketball star Bright Abbott. But he does catch the eye of Bright’s sister, Amy. If you think it’s too good to be true you’re right. The summer before the Browns arrived in town, Bright and his best friend Colin Hart (Mike Erwin) were involved in an off-road accident that left Colin in a coma. When news spread that a world-renowned neurosurgeon was setting up shop in her town can you really blame Amy for shooting her shot by befriending that man’s son? Ephram is hurt to realize he was being used but ends up helping Amy and Colin as his miraculous recovery turns out to be temporary.

Amy and Ephram’s journey from friends to a couple to not really friends and back again is full of angst. But it rises above the usual teenage drama with excellent writing. As established early on in the series, Amy and her brother are only popular through their connection to Colin Hart. As Colin’s health deteriorates and leads to his death, we see Amy going from the most popular girl to someone in the grips of a deep depression. Then we see her become a more confident young woman. And it’s all held together by the incredible performance of Emily VanCamp, who strikes the right balance between fragility and strength, laughter, and tears. 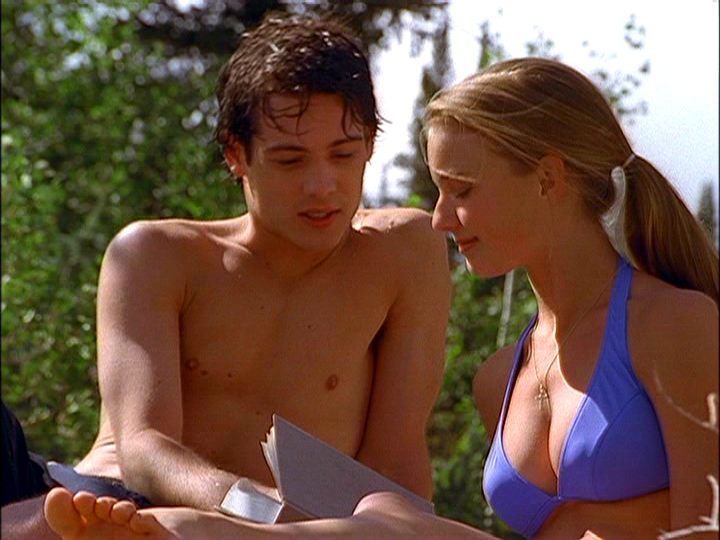 Bright Abbott is the ultimate dumb jock, but the show quickly smashes the stereotype by allowing him to move past his shallow exterior and have real character growth. There are so many times where Bright proves himself to be a better person. But in terms of life-changing moments, there are four that stand out.

In season one, as Andy prepares to operate on Colin we learn through flashbacks that Bright, under the influence of alcohol, was driving at the time of the crash. Not Colin. It’s not just Bright’s confession to his father that will break your heart, but the unconditional love Harold offers his son.

In season two, Bright learns that because he’s failing math he cannot play basketball his senior year and thus will not qualify for a scholarship. Bright takes this in stride, even refusing to use Colin’s death to get an exemption. But he’s devastated by his father’s response that he isn’t smart enough to get into college any other way. Bright does graduate but spends the better part of season three disappointing his parents further as he drifts from job to job and refuses to look into applying to local colleges. His mother’s cancer diagnosis spurs Bright into action and by the beginning of season four, he’s enrolled along with Ephram at Everwood Community College.

The biggest change for Bright came in meeting Amy’s new friend Hannah Rogers, who is the daughter of Nina’s friend who has come to stay in Everwood and is played by one of my all-time favorite actresses Sarah Drew. Shy Hannah is not like Bright’s usual girlfriends, but they become friends even as they deny their attraction. Hannah also has a secret that coupled with his mother’s cancer diagnosis makes it hard for Bright to confess his feelings. Bright eventually does and proves to be the perfect boyfriend in until, spoiler alert, he isn’t. All good character growth comes from making mistakes. But this one is a doozy. And since the show was unceremoniously canceled after four seasons we never got to see Bright return himself to his former glory.

Chris Pratt in his first starring role is spot on playing Bright. You can see the brilliance that would lead him to become a blockbuster movie star. But no matter what role I see him in he’s always and forever Bright to me. 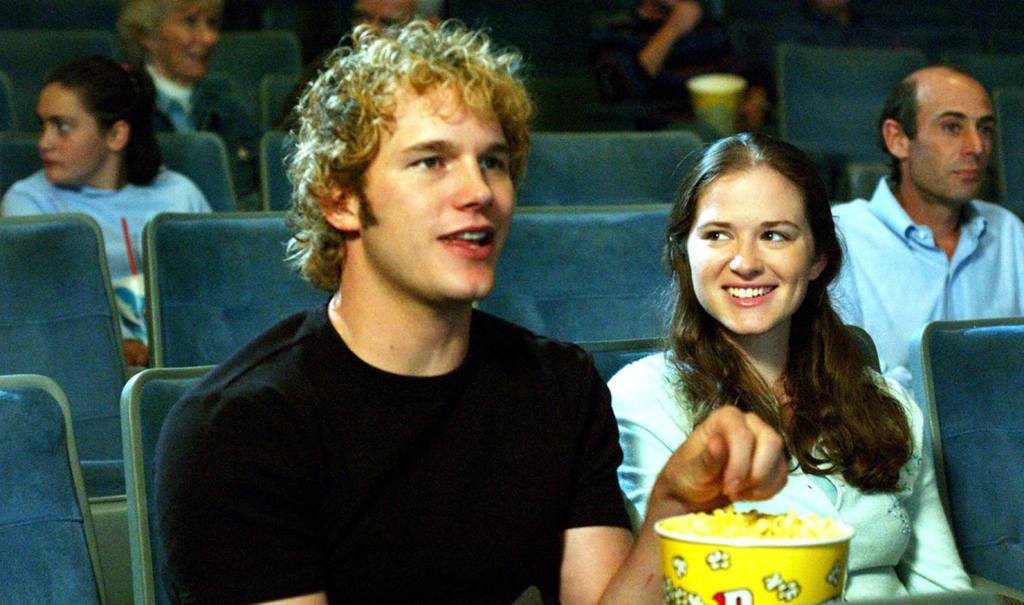 And All The Rest

There are just a few more characters and the incredible actors who played them that should be mentioned. Edna and Irv Harper played by Debra Mooney and John Beasley. Edna being Harold’s mother and a thorn in his side (but in the most loving way possible), and Irv being her second husband and the town’s school bus driver. Irv is an author who’s narration is used at the beginning and end of each episode.

Nina Feeney, played by the late Stephanie Niznik. Nina is Andy’s neighbor who proves herself to be both an amazing friend and sounding board. She is often the one who gives the doctor a reality check. And yes, by the end of the series the two are engaged.

Linda Abbott, played by Marcia Cross. Linda, a doctor who practices new-age medicine, arrives in season two and upends her brother’s life and catches the eye of Andy. Her stay in Everwood is short, but it’s the reasons why she came home that cause both heartbreak and revelation for her mother and brother.

Rose Abbott, played by Merrilyn Gann. Rose is Harold’s wife and the mayor. She’s ever patient and loving, as one would have to be to live with Harold, who is played by Tom Amandes. Harold isn’t as bad as he sounds. Honest. He’s a devoted family man, proud townsperson, and takes being a doctor very seriously. He’s also over the top and takes things to extremes, but everyone loves and respects him in spite of it all.

Delia Brown, played by Viviene Cardone. Delia is Ephram’s younger sister. She’s what I imagine Julia was like. Her stories are mostly told from the perspective of a young girl on the verge of becoming a teenager. But there are also a few heartwarming stories where we find Delia taking after her father and attempting to help one of her friends in need.

And finally, Dr. Jake Hartman played by Scott Wolf. Jake shows up in season three from Los Angeles to set up practice. His rather unorthodox ways upset both Andy and Harold. Of course, for Andy, it might just be the green-eyed monster as Jake catches the eye of Nina. Jake has a few secrets that play out over the next two seasons and Scott Wolf is once again incredible. Seriously, the man never disappoints in his acting choices.

Everwood was just 89 episodes and one of the most heartwarming inspirational family drama’s ever made. It showed us that with love all things are possible and the power of forgiveness. It was taken from us after just four seasons, but that has never stopped its message from being heard. Unfortunately, as of right now, it’s only available to stream on Amazon Prime in the US. But I would recommend anyone interested to buy them on DVD. You’ll want this series to cherish forever. Find and follow us on Twitter @capeandcastle to discuss Everwood! And be sure to check out our site for more articles on all things Disney and beyond! 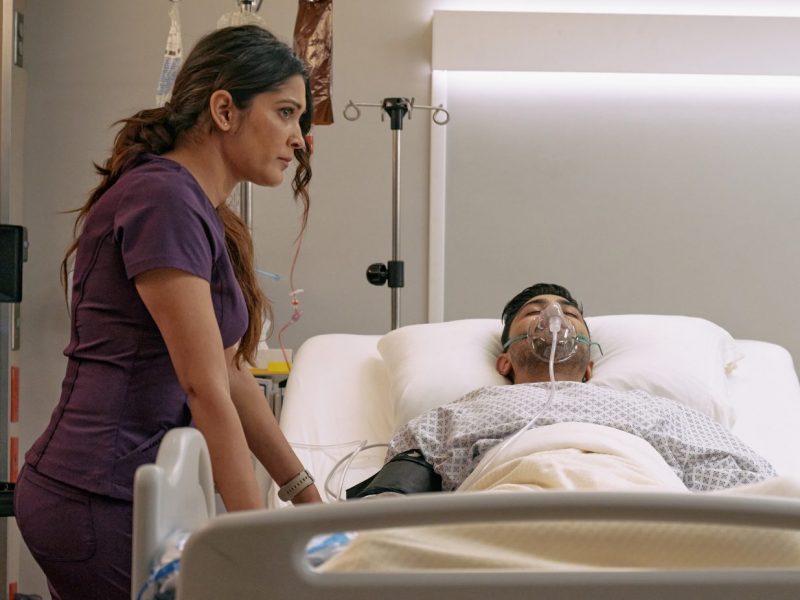 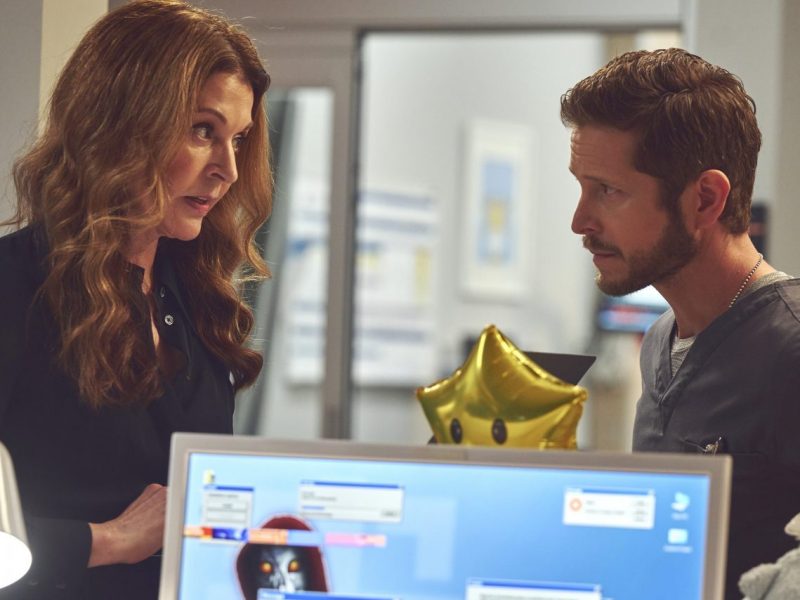 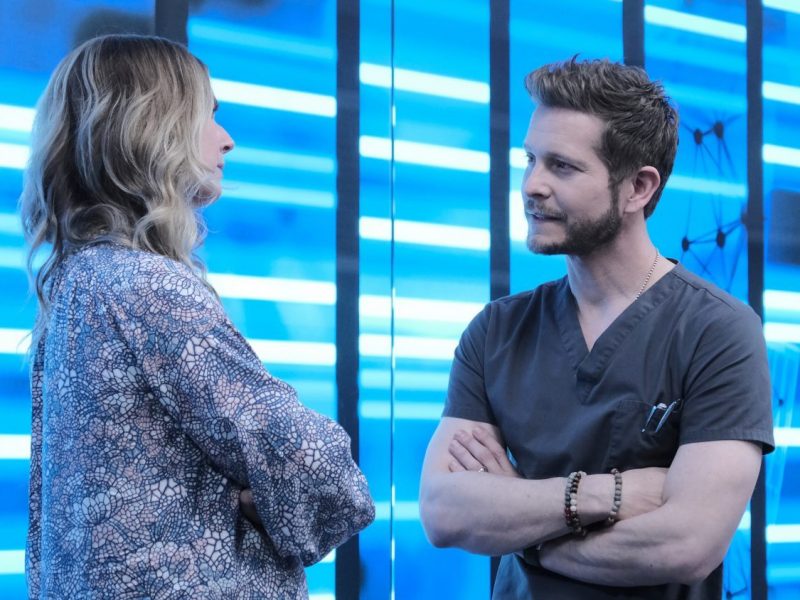