The first episode of Cobra Kai season one (Ace Degenerate) starts with the ending of The Karate Kid Part 1. It’s December 19th 1984, at the All Valley Under 18 Karate Tournament. It’s Daniel LaRusso against Johnny Lawrence, where the underdog Daniel wins, and the hot-shot Johnny Lawrence loses. If you loved the original Karate Kid, you will love Cobra Kai. It has the nostalgia of the original movie and reminds you of the characters’ rich history. Yet, you do not need to have watched the classic 1980’s movie to understand this series.

We see a different side of Johnny than we had in the movie. We understand in flashbacks why Johnny started at Cobra Kai over thirty-five years ago. In the flashbacks, it shows that his step-father, Sid, never wanted him and that his mother didn’t stand up for him. We also learn that Johnny has never gotten over losing that fight at the All Valley Tournament against Daniel. His life is not what he had intended it to be. He lives in Reseda now, which is not the greatest of neighborhoods. In the first episode of the series; he loses his job as a handyman, gets arrested, and his car is wrecked. By the end of the episode, Johnny has a purpose. Teaching karate to the teenagers who he would have bullied when he was younger.

Johnny reopens Cobra Kai with money his step-father leaves him. He is trying to change his life for the better, even if he does it with some tough love. His first student at the dojo is Miguel, a teenager that lives in the same apartment complex.

Miguel is bullied around by some boys at his high school. Then Johnny begins to teach Aisha, the first female to be enrolled in Cobra Kai. As time goes on, Johnny begins to teach more of the “losers” at the high school. The tough love that Johnny teaches these students turns some of them off from returning to the dojo. The ones that do stay learn life lessons, such as life is hard, you may get knocked down, but if what you need to do is get back up and protect yourself.

The teenagers he teaches may learn self-defense, self-respect, and confidence. Yet, by the end of the season, some of the students use what they learned from Johnny to become the same type of bullies they were once scared of. At first, he is proud of his students and even gives Miguel his gi after Miguel beats up four students that had previously beat him up.

Samantha, or Sam, Daniel’s daughter, learns how trying to be one of the “cool kids” won’t last if you don’t act like them. She learns the hard way that if you turn your back on your friends, you get burned. She used to be close friends with Aisha when they were younger. But Aisha does not want to hang out with her anymore.

We are also introduced to Robby, Johnny’s son from a woman that doesn’t even pay attention to him. Johnny didn’t raise Robby and when Johnny tries to come around, Robby tells him it’s too late. When Robby realizes he was replaced by Miguel, he becomes jealous. So Robby goes against Johnny and gets a job at the car dealership of Johnny’s arch-nemesis, Daniel LaRusso. When Robby shows up at Daniel’s house one night to deliver some papers; he begins to learn karate from Daniel.

LaRusso and the Bonsai Tree

Daniel is the bully at the beginning of the series. He shows deep resentment towards the way Johnny bullied him when they were younger. Daniel has power now and uses it to get back at Johnny. First, he tries to buy the strip mall where Cobra Kai is located. Instead, he gets the rent doubled on all of the businesses located there. Daniel is also part of the committee of the All-State Karate Tournament. He tries to make sure Cobra Kai is banned from the tournament after Johnny tries to enter his students into it. Daniel’s wife, Amanda, notices Daniel acting like a “mental patient” and letting Johnny get to him.

Daniel loses his way before remembering Mr. Miyagi and the lessons he taught Daniel as a teenager. He visits Mr. Miyagi’s grave and we flashback to some of the important lessons the man taught him. Daniel then fixes up the dojo he once had at his house and gets back to meditation and karate to become centered once again. He teaches Robby and then starts teaching his daughter again. 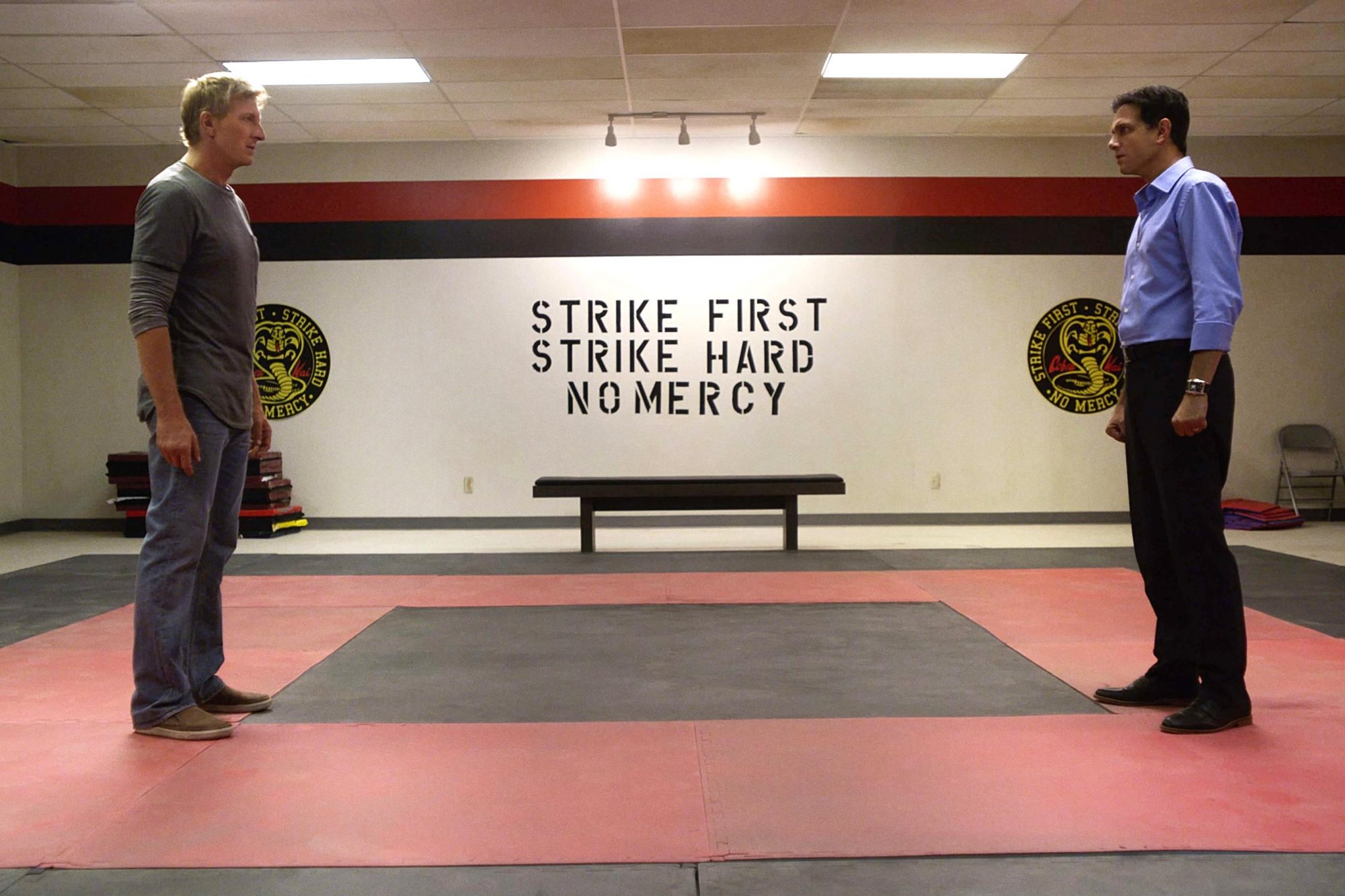 Season one of Cobra Kai is about letting the past dictate who these men are before beginning to learn from their mistakes. It is also about bullying and building self-confidence in a way that can turn you into a person your friends do not recognize.  Cobra Kai shows us Johnny isn’t the same man he once was. Daniel and Johnny learned karate for the same reason, yet learned it from two different types of men. “Flip the script”, as Johnny says, and watch season one of Cobra Kai and remember what it was like to be a child of the 1980s.

Will you be checking out the first season of Cobra Kai? Or have you already watched it? Find and follow us on Twitter @capeandcastle to let us know your thoughts on the first season! And check out our site for more articles.