Last week on Tell Me A Story: Chapter 6: Guilt (review here), the pressure and guilt were too much for some of our characters. For others, their true colors came to light. This week is all about betrayal. Gabe and Hannah are on the run once again and discover betrayal even comes from strangers. While Kayla is looking to make amends, but Nick’s obsession with her takes a dark turn. Jordan reels from Eddie’s suicide but continues on the road of revenge, determined to get Beth’s no matter what. 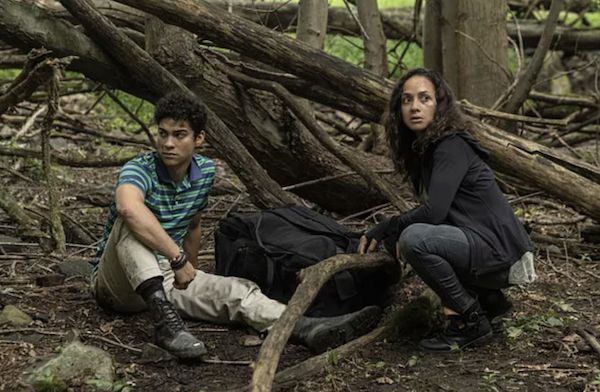 Hansel and Gretel Get Lost in the Woods

After causing the wreck that landed them upside down in the woods with no way to get help, Hannah (Dania Ramirez) and Gabe (Davi Santos) barely get away from their kidnappers. Hannah gets caught up in a PTSD flashback, but Gabe doesn’t hold it against her. Showing some major growth at this point, he just wants to make sure his sister is okay.

The two split when the kidnappers come after them, but both managed to hold their own. Gabe makes it out to an open park area where a woman offered to help him. However, she drugged him with a bottle of water, revealing herself as the witch in the woods. Sneaky and unsuspecting. Still, Hannah came in clutch. One hell of a fighter, she didn’t give an inch, determined to get her brother back. Her internal and external strength as well as her lover for brother is phenomenal and one of the best parts of this show.

This arc really got my heart going this week. Gabe is legit the precious, sensitive one that must be protected at all times, even from himself, but now that the wicked bitch has him. I can’t wait to watch Hannah mow her and every one of her henchmen down to get him back. She and Gabe have their fair share of baggage—who doesn’t—but she’ll go to the ends of the earth to save him.

One Pig Down, Two To Go

Mitch (Michael Raymond-James) mourns the loss of his brother, Eddie (Paul Wesley). The detective following him for the robbery case and death of Beth (Spencer Grammer) wonders if this really was a suicide. Meanwhile, Eddie haunts Jordan (James Wolk) as a form of guilt. The gunshot on the side of his head is still dripping. Jordan refuses to feel guilty but Eddie calls him out on it.

“There it is. Denial posing as self-righteous anger.” – Eddie to Jordan

And this hallucination of Eddie isn’t wrong. Jordan is so far gone at this point that he assumes no responsibility. But now, Jordan is ready to move on to Mitch. Eddie assured him he won’t succeed. He does one better. He found Mitch’s wife.

TMAS via The CW

Sam (Dorian Missick) officially entered the fray and he held nothing back. Jordan went on the run after he shot and killed both Mitch and his wife, making that the second little pig that Jordan went after but didn’t kill. The only thing on his hands isn’t blood, but the responsibility he refuses to take. There’s no need to worry about those loose ends, however, but it does lead me to wonder why Sam doesn’t care about his partners in crime and is a heartless enough bastard to kill them. All in all, it makes him look like more a big bad wolf than  Jordan is.

Jordan’s being haunted by Eddie instead of Beth showed just how much Jordan has changed into the big bad wolf. That there’s no going back for him now. People are dead because of him even though it’s not by his hand directly. This isn’t his conscience telling him to turn back anymore. He’s passed that. So far past it that he refuses to see it.  Now, it’s got him on the run.

Kayla (Danielle Campbell) was finding her way back to Colleen (Kim Cattrall) and her father as well as herself this week. It was going pretty well until she froze cold at hearing that Nick (Billy Magnussen) met her father at the bar in the hotel he works at. I’d be freaking out inside too. Lots of internal screaming.

Nick’s obsession with Kayla is definitely starting to attract teh attention of others too. Laney checked in on Kayla and I couldn’t help but worry because Ethan was butchered after getting too close (rightfully so and I’m not feeling guilty about that) and I don’t want to see Laney end up next for jumping in the middle of this rough break-up. After admitting that she doesn’t actually know anything about Nick the two of them investigated him and discovered he wasn’t who he said he was at all. Whatever it was that the two discover it’s gasp-worthy. Enough so that they got too adventurous and planned a break-in of Nick’s apartment. Personally, while this ups the breathless intensity of the show, I believe Kayla needs to just tuck tail and run.

On the side, Kayla’s father and Katrina (Becki Newton) grew closer as they sought to help Jordan out of his depressing spiral as best they could. I can’t help but feel shady about this woman. There’s been a twist around every corner in this series and I wouldn’t be surprised if she’s connected in some way.

This arc has begun to blend into Jordan’s. This week Kayla’s story is beginning to build up to something explosive. The only question I have at the moment is: Why the hell does Nick have a painting by Kayla’s mother? How did he know her? It’s eating me alive and yet, a part of me isn’t sure I want to know.

TMAS is one of those shows that gets crazier one step at a time until you realize it’s too late to turn back. Each tale came together even more, on the verge of complete convergence. Jordan and Kayla’s father. Hannah, Gabe, and Sam. This is about to turn into one terrifying horror story. But what really made the episode this week wasn’t the connections but the plot twists. Those were the big shockers. Characters fell and others finally came into play.

The theme of tonight’s episode: betrayal, was not a letdown. Some betrayals I’m sure are more obvious than others and others that we haven’t even seen yet. That’s one of the great things about this show. While it does have its predictable side, it’ll still surprise you. I can’t wait for next week’s episode to see Hannah get Gabe back, find out the connection between Kayla’s mother and Nick, and see if Jordan can take out the big bad pig.

What did you think of this week’s episode? Let’s chat about it in the comments and don’t forget to follow us @capeandcastle on Twitter to indulge in other shows you love!