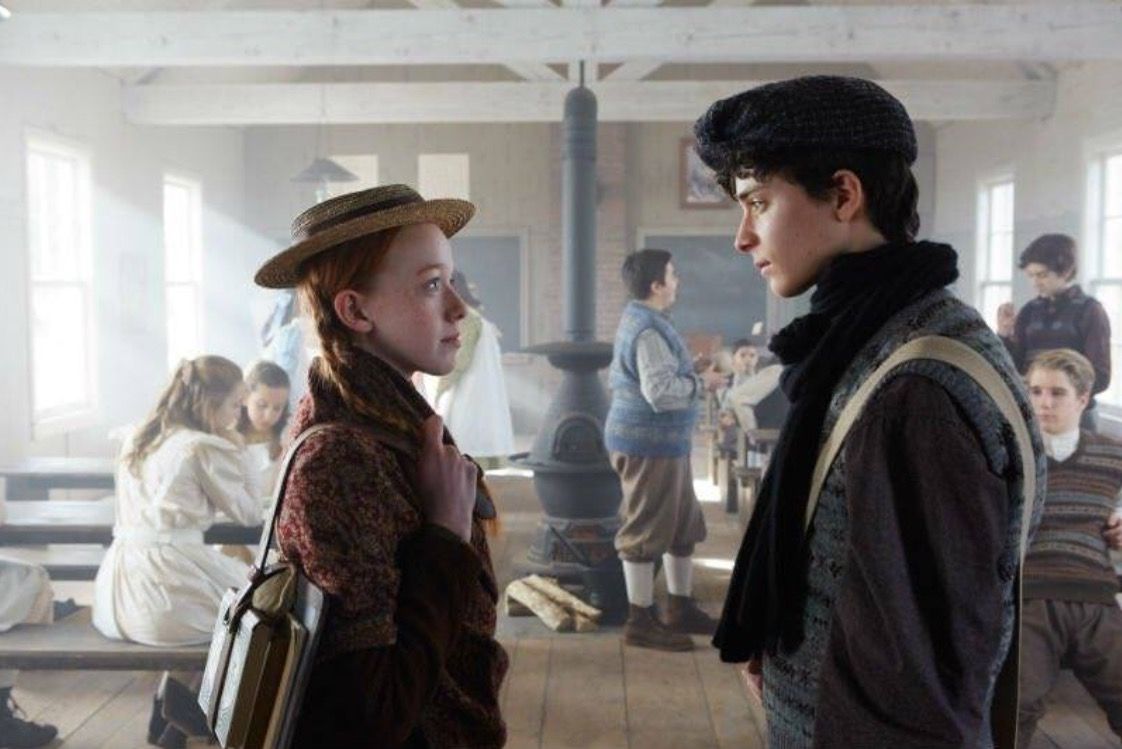 A quick disclaimer: I have not read the original “Anne of Green Gables” by L. M. Montgomery. Don’t worry; I will get around to it soon.

For this particular ship spotlight, we’ll be exploring the Anne and Gilbert or “Shirbert” of Anne with an E, beautifully portrayed by Amybeth McNulty and Lucas Jade Zumann. Anne, as we know, is a bright, imaginative, and high-spirited orphan and Gilbert is the easy-going, confident golden boy of the Avonlea school. Anne is ostracized by her classmates due to her red-hair, talkative nature, and orphan status while Gilbert is revered for his good looks and charm. As we all say, Shirbert is endgame!

What I love most about this couple is how Gilbert has always had a soft spot for Anne despite everyone else in Avonlea having reservations about the imaginative orphan. Even when Anne expresses such distaste for Gilbert, he’s still so friendly to her and he’s never afraid to challenge her. Who doesn’t love that? It just makes it all the more enticing for the pair to eventually get together. It’s the longing, the denial, the soft looks, and the angst. Anne with an E does the rivals-to-lovers trope so well, planting moments of how Anne and Gilbert have grown to love each other throughout the seasons at such pivotal points in their individual arcs.

So, please join me as we take a look at some of my favorite Shirbert moments. Prepare for the tissues because Anne with an E deserves another season and we need more Shirbert goodness in our lives!

When They Blew Out a Candle Together

Such a cute moment between Shirbert after the boy has been away at sea. They blow out the candles on the Christmas tree and then, they blow out one candle together. The two lock eyes and it’s adorable. Anne, also, has her cut after her attempt at dying it. Despite feeling very insecure about her looks, Gilbert still looks at her as if she invented sunshine.

When They Formed a Truce & Couldn’t Say Goodbye

Gilbert’s father has died and he decides to leave Avonlea to explore the world by working on a steamer. Him and Anne meet one last time while Anne and Jerry are doing their best to save Green Gables. Anne runs into Gilbert and the two have lunch. They conclude that to part on good terms, they must call a truce. I loved this moment as the two couldn’t quite part just yet, until Jerry interrupts Shirbert’s intense eye contact with an “au revoir”.

When Season 2 Ended With Them Looking At Each Other

I am in love with the shot of them just looking at each other as the season closes. Anne has decided her vocation and Gilbert tells her he’s staying a bit longer in Avonlea. This scene shows that the two have reached a new point in their relationship that sets us up perfectly for the pining looks we’ll get in season 3.

When Anne Brings Up the Take Notice Board. . .for Ruby

Anne is such a good friend that she sets aside whatever she feels for Gilbert for Ruby, who is still so blindly smitten with the boy, and talks to him about him posting on the “take notice” board. The back and forth between the pair as Gilbert thinks Anne is talking about her and Anne is trying to help Ruby. The real pain is Gilbert’s crestfallen expression as Anne tells him he should post his notice of Ruby, but you know she wants it to be her.

When Gilbert Stands with Anne

Anne is such a passionate individual and does the right thing even when others would admonish it. She published an article in defense of Josie that causes the student published newspaper to be banned. Her classmates blame Anne for tarnishing the newspaper, while Gilbert reminds them that Anne has always done the right thing. I love that Gilbert is right there with her as they wait for everyone to arrive-nay, hoping everyone arrives. This is one of the many things I love about Shirbert, they know what is right and will do what is right.

There is so much going on in this moment. Gilbert goes to Anne when it looks like his future with Winifred will be happening. He is still so undone by Anne that he is looking for her to give him an answer.  Gilbert doesn’t give Anne much time to answer, before the girls steal her away. The girl is drunk and he gives her no time to process such a big decision. Nonetheless, the angst is so real and it just makes me want more.

When Anne Smashes Her Slate On His Head

I feel for Gilbert in the scenes leading up to this truly iconic moment because he’s trying his best to be welcoming to his newest classmate, but of course, Anne walking in with Gilbert earlier did not sit well with the girls. The boy is throwing chalk pieces at her, places an apple from his orchard on her desk, and then pulls her hair calling her “carrots”. Oh honey, no.

When Gilbert Should’ve Added the “E”

Gilbert is only 13 years old and the boy already knows how to flirt so smoothly. Anne and Gilbert have begun their academic rivalry and are the final two in a class spelling bee. Gilbert is checking out Anne as she spells out her words. It’s Gilbert’s turn with the word “engagement”, he misspells thus naming Anne the victor. When he goes to congratulate her, he says with a smug little smile:

When They Danced Together at Dance Practice

My God, this scene still leaves me in shambles. As Rachel Lynde helps the students learn the dance for the upcoming county fair, Anne & Gilbert use this time to pretty much dance around their feelings for each other. The way Gilbert just breaks the line to bring her to his side. The way Anne looks as if she’s seeing him differently. Everything about this scene makes me scream! Especially after practice ends and they meet in the coat area, ugh, perfection!

When They Finally Get Together

FINALLY! After seasons and episodes of Anne & Gilbert denying how they feel about each other, it all culminates in Gilbert running from the train (after getting his ass handed to him by Diana) to Anne and then they meet right outside her boarding house. They kiss and finally, they know how the other feels. I, especially, love the moment when Gilbert jumps down from his carriage to kiss her one more time. I cannot.