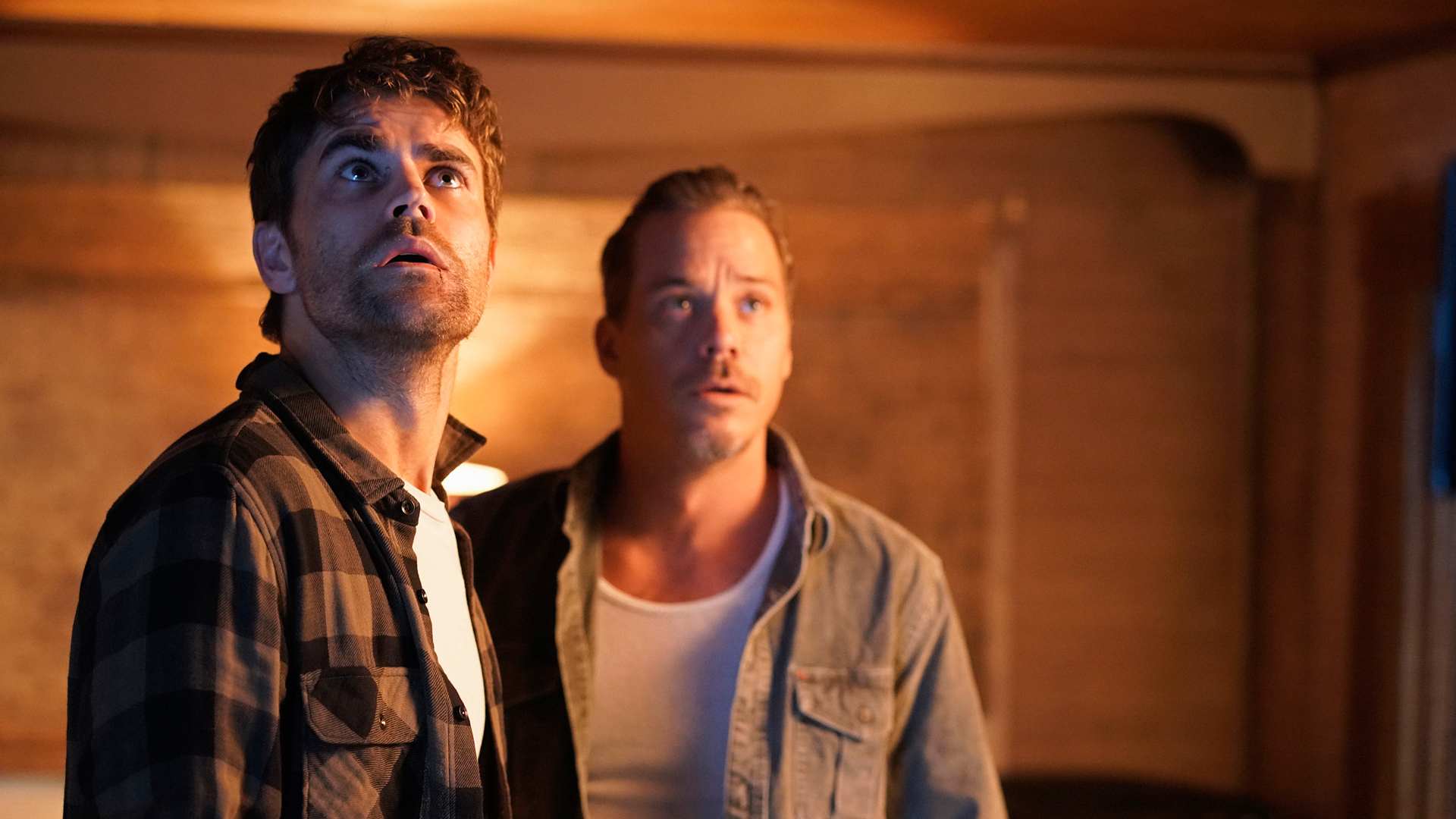 Last week on Tell Me A Story: Chapter 4 “Rage”, our dark fairytales slipped into the darkness of rage. Unexpected revelations came to light as well. You can read the review here! This week, they’ll fall even deeper down the rabbit hole into madness, the silver lining being forgiveness. Will any of them reach for it? Or, will they be consumed entirely by their rage?

Jordan (James Wolk) awakens in rough shape after the beating Eddie gave him and Beth (Spencer Grammer) is there to greet him. A figment of his imagination, a hallucination even, that invades Jordan’s conscience shows just how far gone he may be. Way past seeking justice now, he’s determined to give these little pigs what they deserve. Never mess with a desperate man. They are deadly.

Though it would seem the vision of Beth would act as his enabler, she’s the exact opposite. Acting as his conscience, she only wishes for him to forgive and move on. Jordan confesses that she was right. There’s nothing good left in the world or in him.

“That man died with you,” Jordan tells the vision of Beth and he reveals the gun he stole from Eddie. The same gun that possibly killed Beth.

Eddie is so far gone out of his mind with the kind of madness that doesn’t stem from rage but from guilt. Mitch (Micheal Raymond-James) can barely reel him in. But, he could be joining him soon because he starts to see Jordan too.

This arc hit broke the crazy meter in this episode. Jordan’s officially succumbed to his madness to the point that not even the memory of Beth can penetrate it. So he’s no longer seeking that these men get put away, but that they die for their transgression. First, he wants them to know he’s coming and why because it would mean very little if they didn’t know. The fact that Jordan is actually following the fairytale metaphor with this is impressive and even gives way to the chill factor. Stalking his prey, he’s ready to strike.

What Red Doesn’t Know May Kill Her

Kayla (Danielle Campbell) is working on recovering ground with Colleen (Kim Cattrall) and even with herself. Meanwhile, Nick (Billy Magnussen) deals with unexpected trouble that has threatened to out him and Kayla. That’s right. It was Ethan. Are you guys surprised? The little sociopath is obsessed with Kayla. And he’s not the only one. Nick works quickly and angrily to dispose of the issue. 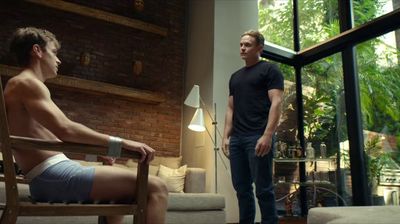 Tell Me A Story via TV Maze

It’s the moment I’ve been waiting for. What I knew was coming since episode 1. Nick showed his true colors when he went after Ethan because of his threats. If there’s anybody who’s earned the royal tie-up and torture treatment it’s Ethan.

What’s particularly surprising about this is that Nick is ten times worse than Ethan is. Seeing red (pardon the pun), Nick skates right past rage and into the theme of this episode, madness. A feeling that can cause blindness and ultimately lead to Nick killing Ethan. 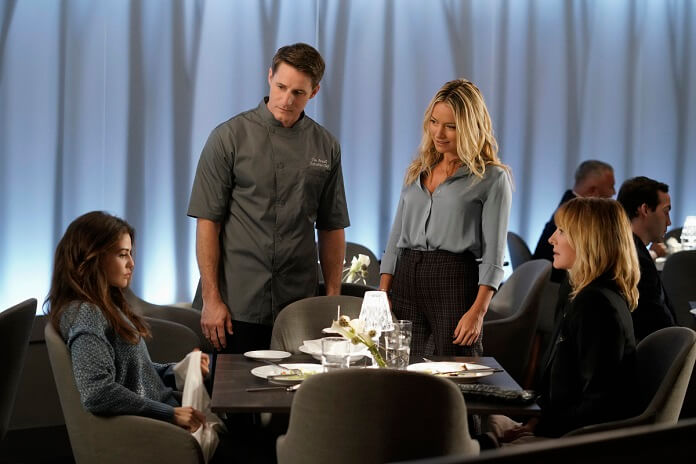 Kayla’s attempt to mend the gap between her and Colleen is stinted by the sting of her father’s unwanted presence. Still trying to break past her volatile walls, he’s just not seeing or understanding that the pain of losing her mother aches. He’s too busy introducing her to Katrina Thorn (Becki Newton, How I Met Your Mother, Ugly Betty), the hotel’s general manager, and the one who gave him his new job. Even though it’s just a friendly introduction, Kayla storms away angrily, leaving everyone in the rubble of her unhappiness.

The big reveal of the episode comes when he tries to break through to Kayla and she cries out about how she knows he cheated on her mother. That it’s his fault she died in a car accident. The high emotion really wove through me like the rosebush vines Kayla painted across her walls.

This was definitely the dramatic and emotional arc of the episode with Nick taking off his sheepskin and revealing just how big and bad of a wolf he is, proving that it’s him that walks the path of madness, not Kayla. But at the same time, Kayla finally breaks down and reveals why she’s so angry with her father. By how shocked and stunned he was at the accusation, I don’t think he was the cheater. I’ve got a feeling Kayla doesn’t have all the facts.

Hansel and Gretel in the House That Built Them 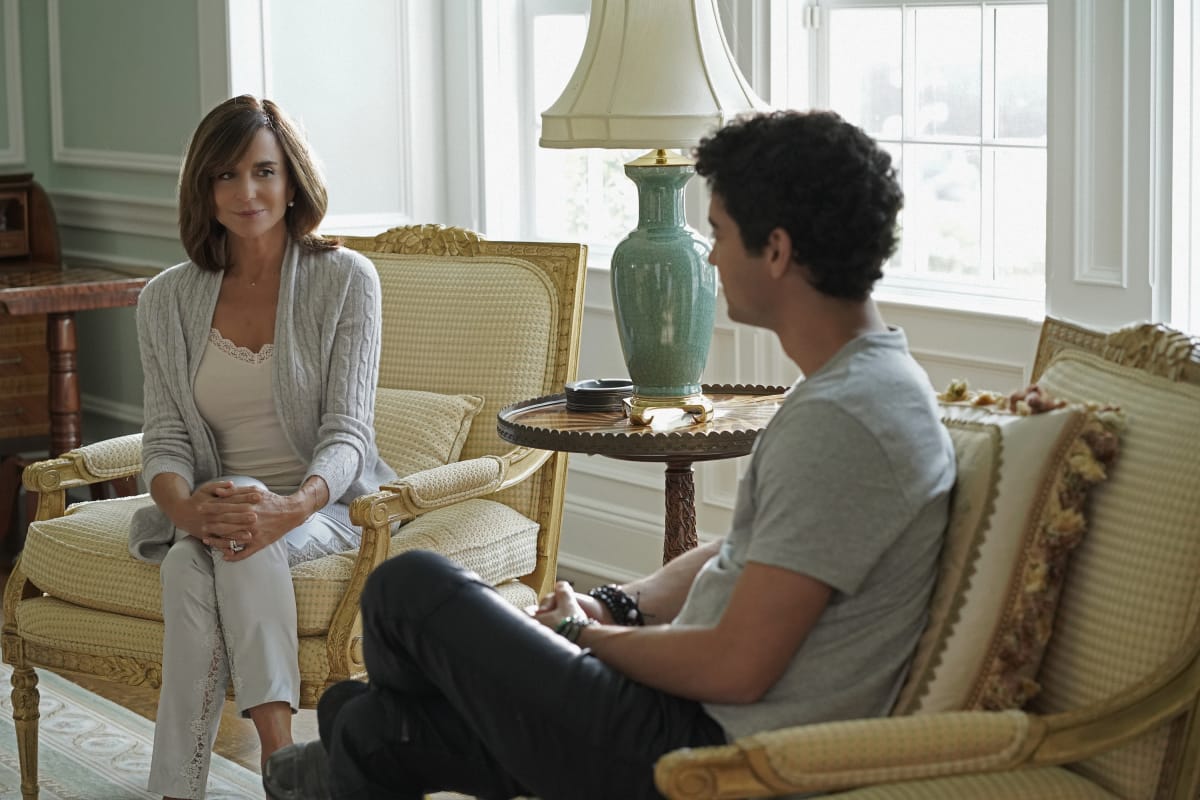 Hannah (Dania Ramirez) and Gabe (Davi Santos) face their mother. She immediately gives the spiel, “I’m so sorry. I never wanted to leave you, kids.”. Hannah doesn’t believe if for a second, not with this fancy house and lifestyle she’s leading, and neither do I. She refuses to forgive her and I don’t blame her. And the cupcakes she brought out as a welcoming treat doesn’t fix the fact that she never sought her children out before this. I was left wondering if she was tied to the wicked witch with the house made of sweets and if this means she will be making her entrance on the show soon. Those cupcakes look to be an easter egg. 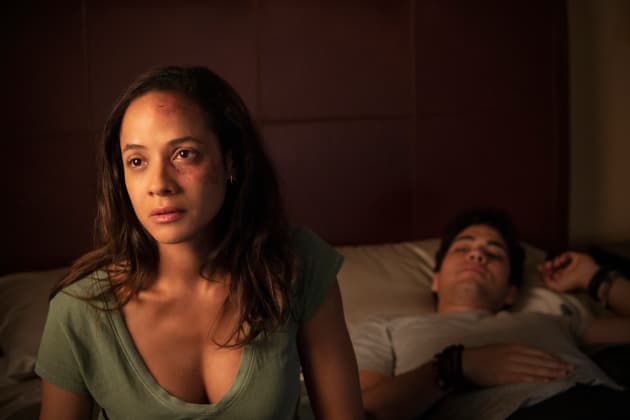 And still being hidden away while their mother throws a party, plummeting Hannah and Gabe into more secrets, except they’re the secret this time. Gabe doesn’t mind this but Hannah isn’t keen on it at all and crashes her mother’s party by sharing the story with a couple of guests about how she was left to care for her father when he was dying and how she received the battle scars on her back. The moment creates an especially tense moment between mother and daughter with no relief in sight.

Hannah and Gabe’s story seemed to come to a bit of a standstill in this episode as they wait for their ride to freedom. Yet, I can feel the build-up here. Something dark this way comes for Hansel and Gretel.

So it’s the little pigs that are now on the run from the big bad wolf that Jordan has become. Having succumbed to his rage, he refuses to move on, sure that Beth was right. There’s nothing good left in the world.

Kayla running into Nick’s arms after his deadly activities really go to show that this isn’t your typical Pretty Little Liars storyline. Kayla is trying to piece her life back together after her family has completely shattered which keeps her from seeing how psychotic Nick is.

Hannah’s continuous suspicion of her mother’s motives is shaky. A woman’s intuition has never strayed her wrong. The trouble isn’t over for these two, and something tells me that it’ll be mom’s fault.

The episode didn’t hold very much surprise and felt like mostly filler that only progressed the backstory of each tale. Actually, I take that back. That pig head came smashing through Eddie’s window left me seriously shocked. That scene was a pretty good jump-scare and totally proved that Jordan was getting serious about his revenge on these three little pigs. He’d let the madness of losing Beth take him over completely.

The theme of madness isn’t the only emotion that came into play in this episode. On the other side of this teeter-totter is forgiveness. Each character is given an opportunity to forgive and move forward in this episode. But is it too late for our broken characters in these twisted fairytales?