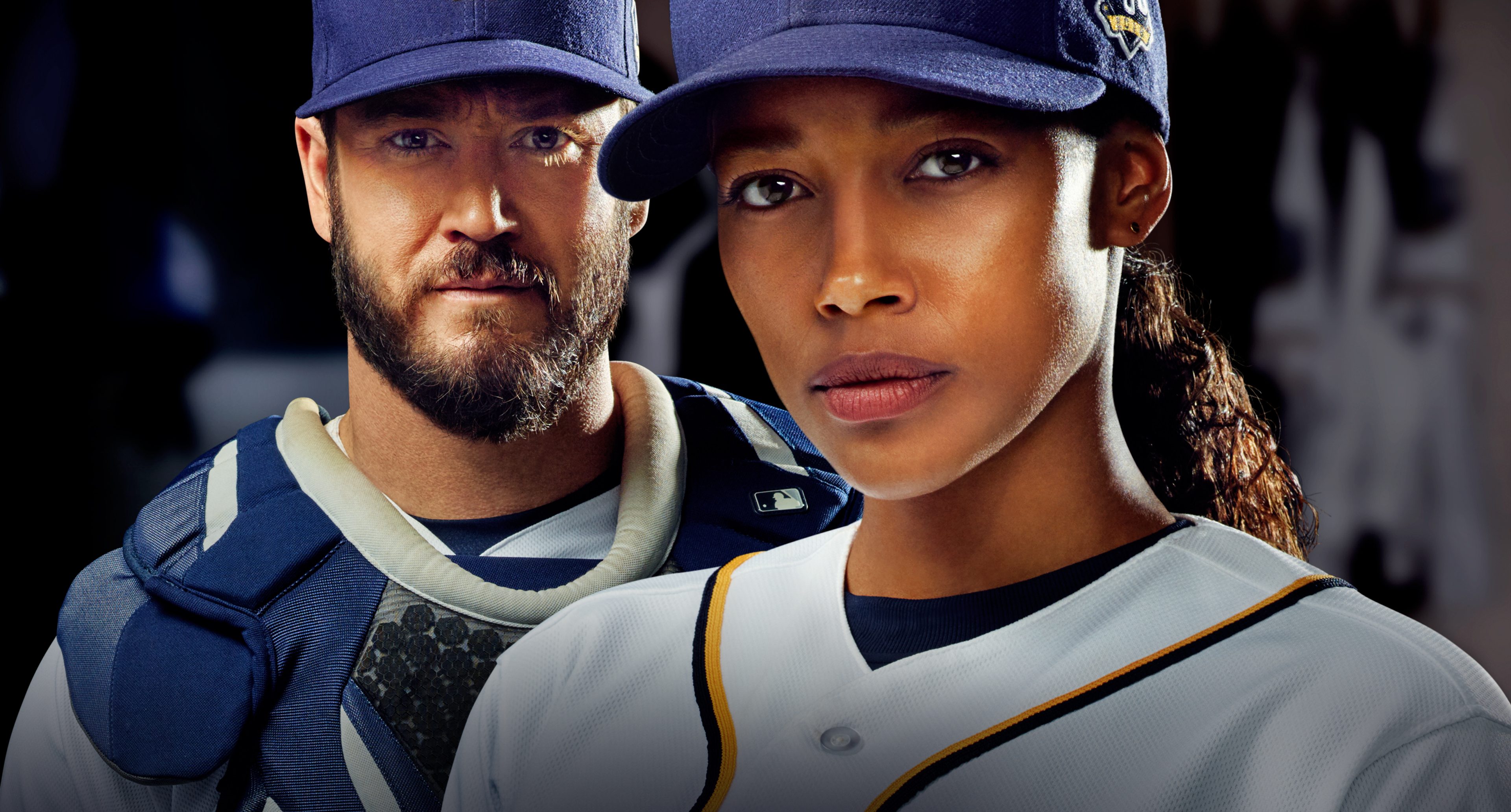 I get far too emotionally attached to shows. The best example of that is Pitch. By the end of the first episode in this 10 episode sports drama I was a goner. I mean I’ve always enjoyed baseball, but this show was so much more than just the game. The show itself could do a wondrous job telling the trials of being the first female player in the MLB, but what hit so many of us the deepest was the flourishing relationship between Ginny Baker and Mike Lawson. When the show got cancelled after its heartbreaking cliffhanger I was so damn angry. I’ve tried to reign myself in here and there, but that has not gone well. Fans like myself still can’t help but lose our damn minds when there is even the briefest mention of the show or its epic ship known as Bawson.

Fun Dynamics From The Start

Within the first few minutes of these two meeting each other the chemistry was off the charts. There’s sass and some slight teasing from their first conversation that felt like it had been going on for years. Ginny’s likely had a thing for Mike for some time since she had not only his rookie card, but also his poster on her wall when she was a teenager. So, she was a bit starstruck when she finally met him in person for the first time. On top of meeting her idol she was certainly nervous getting ready to play in her first ever MLB game and he acted like his normal cocky self to make it just like any other game. He diffused her nerves by saying she’s actually his second prettiest teammate, with her coming just behind Leonardo DiCaprio. She’s not afraid to give him sass right back by asking if it was young, pretty Leo or the older Leo who looks like a fish.

A fun and playful part of the show was definitely the ass-slapping. As in most sports there is some sense of team camaraderie that involves either high-fives or chest bumps, but with Mike Lawson it was slapping his teammates’ asses. Ginny let him know she wasn’t going to just let it slide just for him cop a feel. Mike lets her know that as long as he’ll be slapping the hairy and pimply asses of the other team members he will be slapping hers as well. And she sure as hell shows him he won’t be the only one slapping asses on the Padres.

More often than not Mike will almost exclusively refer to Ginny by Rookie. She was the newest team member so the title makes complete sense. There was such a lightheartedness that seemed to come from Mike any time he called her by the moniker. Looking back on the show I can’t seem to recall any other players calling her by that nickname. At a certain point she became just his Rookie.

It’s hinted at quite often that Mike is a bit older than her and if my math is correct I believe there is a 13-ish year age gap between them. In one instance she has some fun and called him “old man”. In many moments on the show Mike is never a fan of his age being called into question, but when it comes to Ginny you’ll never see a smile so big on his face.

A Chance for Something More

At the start of the series it seems like these two will likely be teammates and nothing else. That thankfully starts to change pretty quickly. In the pilot Ginny heard Mike making a punchline out of her joining the team, but he learned pretty quickly that she was the real deal and a total gamer. He eventually gets the other guys to see her as a member of the team. She was not just a gimmick. She was a Padre just like the rest of them. From bar outings, to a mini brawl on the field, and even a fun naked photo shoot (THANK YOU ESPN BODY ISSUE), they were able to form a friendship that felt like it has already been years in the making.

As they quickly became friends they could tell it wasn’t just like the friend you would see in passing every so often. It was the friend that he could call late at night when he couldn’t sleep just to talk about the day. The friend that checked on her when it seemed like she was having a panic attack. The person she wanted to bring to a super awkward dinner with her estranged mom. The friend that she could mock relentlessly about his Duck Dynasty looking beard or the incredibly hoarse laugh that only he could bring out. Each interaction became something that they couldn’t do with anyone else.

With each episode the simplest actions could fuel the wildfire of feels that felt like a wonderful foundation to a “someday” between them.

You got the sense pretty quickly that young Ginny had a crush on the up and coming ballplayer Mike Lawson. So it’s perfectly understandable that she’s always going to carry a slight torch for the man even when he starts hooking up with her agent.

Mike’s feelings continued to grow as each episode passed. As his friends with benefits relationship progressed, he continued to rely on Ginny. Even if it was the middle of the night, he’d just call her to talk. Later in the series when a teammate confessed his “feelings” for Ginny, Mike set him straight and tells him that he doesn’t even know Baker. Mike’s the one who spent hundreds of hours talking to her and knows her deep hatred of cilantro, that her favorite drink was grape soda, and that when training she hummed Katy Perry extremely off-key. The look that Blip Sanders gave his friend Mike was just the cherry on top of reactions to Mike Lawson basically professing his love for Ginny Baker.

An End Before a Real Beginning

While feelings for each other were bubbling beneath the surface these two sadly never got to act on said feelings.

At the beginning of the series Mike started out as a divorced man who started a fling with Ginny’s agent, but he was also confused by the mixed feelings he was having for his ex-wife. From Ginny’s past she had a rule about not dating ball players. She had gotten burned by a past ex and she promised herself she would never do that to herself again. Towards the end of the series she allowed herself to finally feel something for a guy when she explored a relationship with a billionaire tech mogul who made her feel like she was more than just a robot in cleats. While they explore the possible futures with these other people, they would question if it was the right decision for themselves.

What allowed them to take the leap with one another was when Mike came so freakin’ close to being trader to another team.

He hadn’t been happy on the team because of recent hires, his aging body, and management was basically pushing him out. He figured he should get his shot at “the ring” and leave. In the span of 48 hours he was leaving the only team he had ever known and he had alienated all of his friends and teammates in the process. He was almost going to get away without a goodbye, but he had to make sure he saw one person, Ginny Baker.

She wanted a chance at something “normal” with this billionaire, but she left her date as soon as Mike called to meet for a final farewell drink.

These two have one of their honest, but fun chats about what they were going to miss most about each other and it felt like no one else was in the bar. The quiet moment between them was heavy, too much for Mike who shrugs it off and laments that he had to leave for the plane ride in the morning. Their goodbye began with a heartfelt hug that no two teammates would ever share. Ginny and Mike start to feel this otherworldly pull and their lips almost brush. It’s a breathtaking moment that felt like it would last forever, because what was stopping either of them if they were no longer teammates. Just as they are about to kiss his phone rings and it shatters the moment and their bubble broke when Mike found out he wasn’t leaving the team after all.

Where this story ends is a bit bittersweet. With Mike no longer being a possibility Ginny wanted to pursue the billionaire and Mike thought it would be best if he got back together with his ex-wife. Most shows are able build the drama and tension over the course of a few seasons, where then at some point it all culminates in what is likely an epic, shiver-inducing kiss, but we never got a true Bawson kiss.

In the case of Pitch we were left with a heartbreaking cliffhanger. During Ginny’s first almost no-hitter game she ended up being injured on a play and she left the game. The last shots we got were of Mike and Ginny — Mike contemplating if this really was Ginny’s last game and what does it mean for him now that he was likely getting back together with his ex. Ginny was left alone while getting an MRI wondering if this one stupid moment was going to put an end to the career she had worked her entire life to get. An ending such as this one left us feeling like we were teetering on the edge of an emotional cliff. Any fan of Pitch hoped that we would get some sort of answers resolved in a season 2 premier, but that unfortunately never came to be as FOX cancelled the series early in the spring of 2017.

Maybe We’re Not Done Yet

With the day and age we’re in there are reboots/un-cancellations left and right. I’m wondering what I have to sacrifice to the TV gods in hopes that Pitch gets drafted by another network or streaming service. But you’re probably a bit curious as to why I’m bringing any of this up.

We were lucky enough a few months back to get news that Hulu was bringing the show back on its streaming platform. There was even a glimmer of hope when creator Dan Fogelman said that with it finding a home on the platform that “maybe it will explode (and maybe, just maybe, we will get to make more!)”. Just to add more fuel to shipper fire, Hulu released a new promo with Ginny and Mike’s signature banter with them proclaiming how much they wanted to get back into the game. We have no clue if any of these hints actually mean anything, but I’m not giving up hope. Not only does Ginny Baker deserve to be put back in the game, but all the Bawson shippers are ready to lose our fucking minds if we get to see the Captain and his Rookie together again.

Game on. All episodes of #Pitch are now streaming. ⚾️ pic.twitter.com/FDbI4yLSaQ

I’ve probably gone on long enough about the amazing, yet heart wrenching ship that is Bawson, but that doesn’t mean that the conversation stops here. Find and follow us on Twitter @capeandcastle and join in on all of our shipping chats. Feel free to explore other awesome ships by checking out our site for more Ship Spotlights.