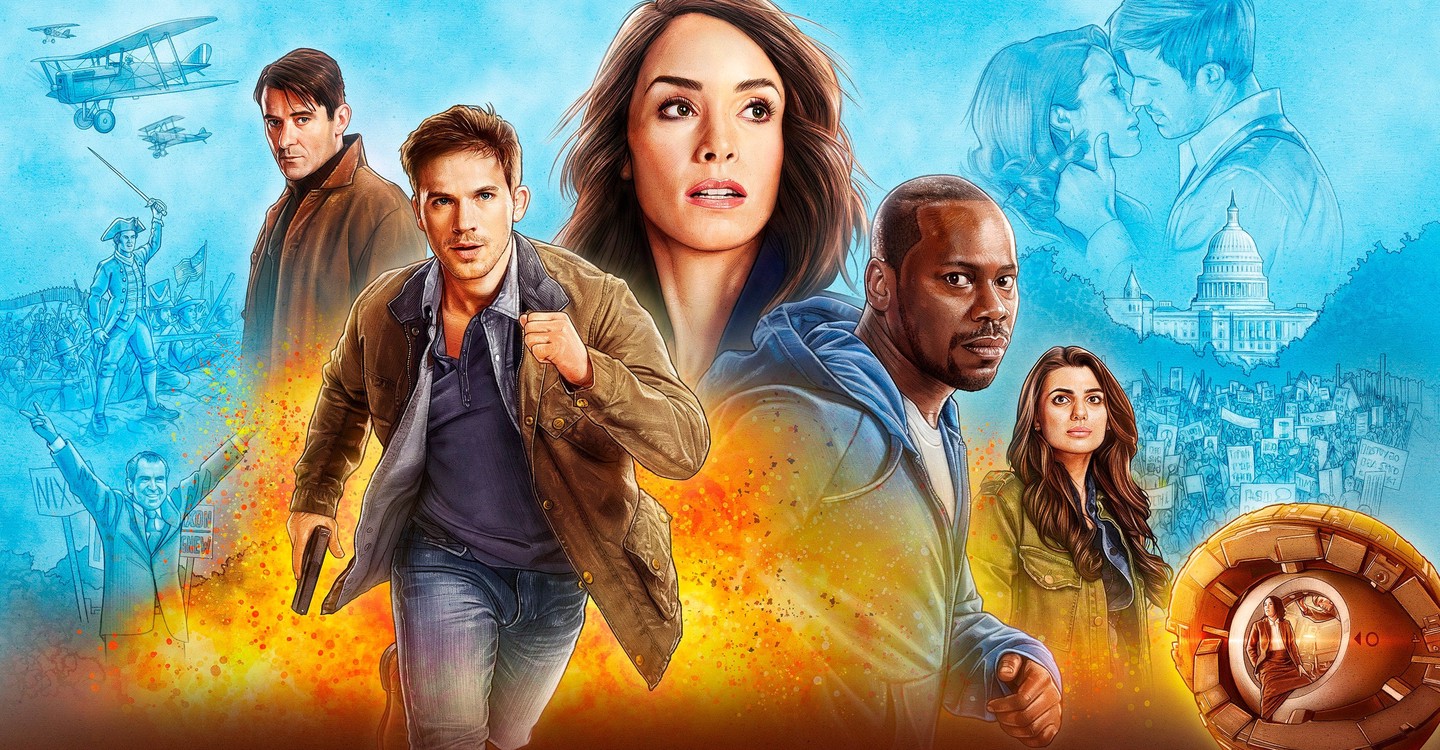 I watch a lot of television and, as a result, I’ve seen a lot of television pilots in my lifetime. So I feel qualified enough to say that Timeless has the most perfect pilot episode I’ve ever seen. It hooked me. It set up the characters, the plot, and the relationships in a way that immediately made the show fun and engaging. But it was cancelled too soon, as it existed on the much feared bubble. This show with a terrific cast, writing team, and premise only got a total of 28 episodes.

Today, we’re going to explore what made this short-lived show so captivating and reminisce on how fans saved it not once but twice. This will be bittersweet for me as I miss this seeing this cast together on a daily basis but here we go!

Rufus Carlin, Lucy Preston, and Wyatt Logan. The Pilot, The Historian, and The Soldier. Every franchise has its “trio” and this is ours.

From the outset, I loved each of them for very different reasons. Rufus, for being somewhat of an underdog who proved he had a steel rod for a backbone and surprised even himself. Lucy, for being highly logical and determined to show us you don’t have to be a trained soldier to fight. Wyatt, for being cocky and bullheaded and yet showing us that sometimes those two traits can be advantageous, given the right circumstances.

Together these three were found family magic, and there is nothing I love better than a found family. They struggled to gel as a team and find their role within the missions but once they did, their bond was unbreakable. No matter how Flynn or Rittenhouse tried, they could not sever their link.

(In season one, anyway.)

It’s what made those first 16 episodes so enjoyable for me. I loved watching these people become invaluable to each other. And when that dynamic started to include Agent Christopher, Jiya Marri, and Connor Mason I couldn’t have been happier. Jiya and Denise especially added a wonderful new dimension to the team.

I remember watching the first season finale and immediately dreaming up all the scenarios that would bring our Timeteam back together, and what they’re continued battle against Rittenhouse would look like. Timeless captured my imagination in 16 episodes and never let it go.

Let’s be real, yes, we all loved the history involved in every Timeless episode and they did a great job using figures or events that are often overlooked, but we showed up for the relationships. Whether that was the Timeteam friendship, Lyatt, Garcy, Riya, or even Denise and Michelle (honestly they were ultimate OTP goals), we wanted to watch these relationships form and grow.

They more than allowed us to watch those progressions and even some progressions I never thought we’d get to see. Denise and Connor’s friendship was one of my favorite parts of season two and I never would have seen that coming in season one. Much like the weird friendship that started to develop between Rufus and Flynn. At the end of the first season I never would have expected their dynamic but I enjoyed it in the second.

This show tried their best to mix it up and give us as many of these characters interacting as they could. It kept things interesting and it was a refreshing attitude that most shows don’t share.

Granted, Timeless did romanticize certain historical figures for fiction’s sake but for every less than realistic detail they made sure to give us a dash of truth.

Whether that was through Rufus and racial injustices or Lucy and the continuing struggle of sexism in our culture, we saw various shades of why time travel wouldn’t always be excellent (to reference Bill & Ted.)

I appreciated that, especially after so many iterations of time travel television that skirt around those things. I wouldn’t recommend using Timeless as your only resource for American history lessons, but it’s a good place to start and a great medium for raising awareness of people and events that would otherwise be ignored.

The show was cancelled after one season and the outcry on twitter was immediate. On May 10th, 2017 NBC announced they had cancelled Timeless. Just days later, on May 13th, NBC reversed their decision and gave the show a 10 episode order for a second season.

Yes, you read that right. Days. Not weeks. Days. That’s how vocal this fanbase was after just 16 episodes! That is truly remarkable! And what’s even more remarkable is that they rallied around the show and saved it not just once but twice!

Season two ended on a cliffhanger after those ten episodes and was again cancelled on June 22, 2018. Fans all over social media organized together and started a campaign to save the show. Almost exactly a month after cancellation, the Save Timeless campaign flew a massive banner over SDCC that year.

Malcolm Barrett (Rufus Carlin) even had an impulsive meet up with some of the fans who were able to make it out. Everyone involved enjoyed a once in a lifetime moment that revived our hope that we might see more of our favorite time travel drama.

And, in fact, we would. On July 31st, 2018 NBC announced they’d greenlit a two hour special for Timeless to allow the cast, crew, and fans a proper conclusion.

That second revival brought Clockblockers everywhere a special we could watch every Christmas as it was entirely themed around it. For two hours, we were able to watch our Timeteam try their best to celebrate together. A new tradition was born for a fanbase that had worked tirelessly to keep their show alive for two seasons.

The special honestly felt like fanfiction come to life and served up so many treats to die hard viewers. There were inside jokes sprinkled throughout (Heliclockters and Jan were instantly recognizable to campaigners) and payoffs for almost every dangling thread.

In true Timeless fashion, though, they left a few things unresolved for the viewer to ponder. Or perhaps to resolve in a future revival? To this day, Sony and the cast are still teasing fans with the idea that Timeless isn’t dead. As a result, devout fans continue to hope a network or streamer will pick up where the special left off.

And if campaigning with them has taught me anything it’s this: never underestimate a clockblocker.

Where Are They Now?

Malcolm Barrett can be seen on Eric Kripke’s The Boys (with Claudia Doumit and Goran Visnjic), Netflix’s Santa Clarita Diet (also with Visnjic), and he’s been writing and producing award nominated plays for Ammunition Theatre Company.

Abigail Spencer had a show premiere (and be cancelled sadly) on Hulu called Reprisal where she played a formidable badass named Doris. She also returned to Grey’s Anatomy as Megan Hunt and appeared on the YouTube Premium series, Wayne.

Matt Lanter has also been extremely busy. He returned to work on Clone Wars as Anakin Skywalker and as Arthur Curry for DC Animation’s Justice League. He made appearances on Disney’s The Mandalorian and Apple TV’s Defending Jacob. But his biggest project has yet to be released and it is currently in post production. Netflix will release Jupiter’s Legacy sometime this year if Millarworld Productions ever finishes all those VFX shots.

Sakina Jaffrey should be a household name with the amount of amazing work she’s done since Timeless ended. She was in Mindy Kaling’s Late Night, American Gods on Starz, Netflix’s Lost In Space, and Defending Jacob.

Claudia Doumit made the appearances I mentioned with Malcolm while also making history in the Call of Duty franchise. She portrayed the first playable female protagonist within that world.

We’ve seen Goran Visnjic around a lot too. He made those appearances with Malcolm. But also had a prominent guest role as Nikola Tesla on an episode of Doctor Who. (Which should be especially funny to Timeless fans considering the show made reference to Edison being Rittenhouse more than once.)

Essentially, our Timeless cast has been out there kicking ass and continuing to show us how talented and impressive they truly are. We wish them the best. But we continue to hope they’ll get to dust off the Lifeboat for more time travel adventures!

I hope you’ve had fun looking back at Timeless with me! If you’re interested in more Fandom Flashbacks you can find the rest of our article series here. Give us a follow on twitter and let’s keep the conversation going! Stop by and tell us your favorite Timeless memory!