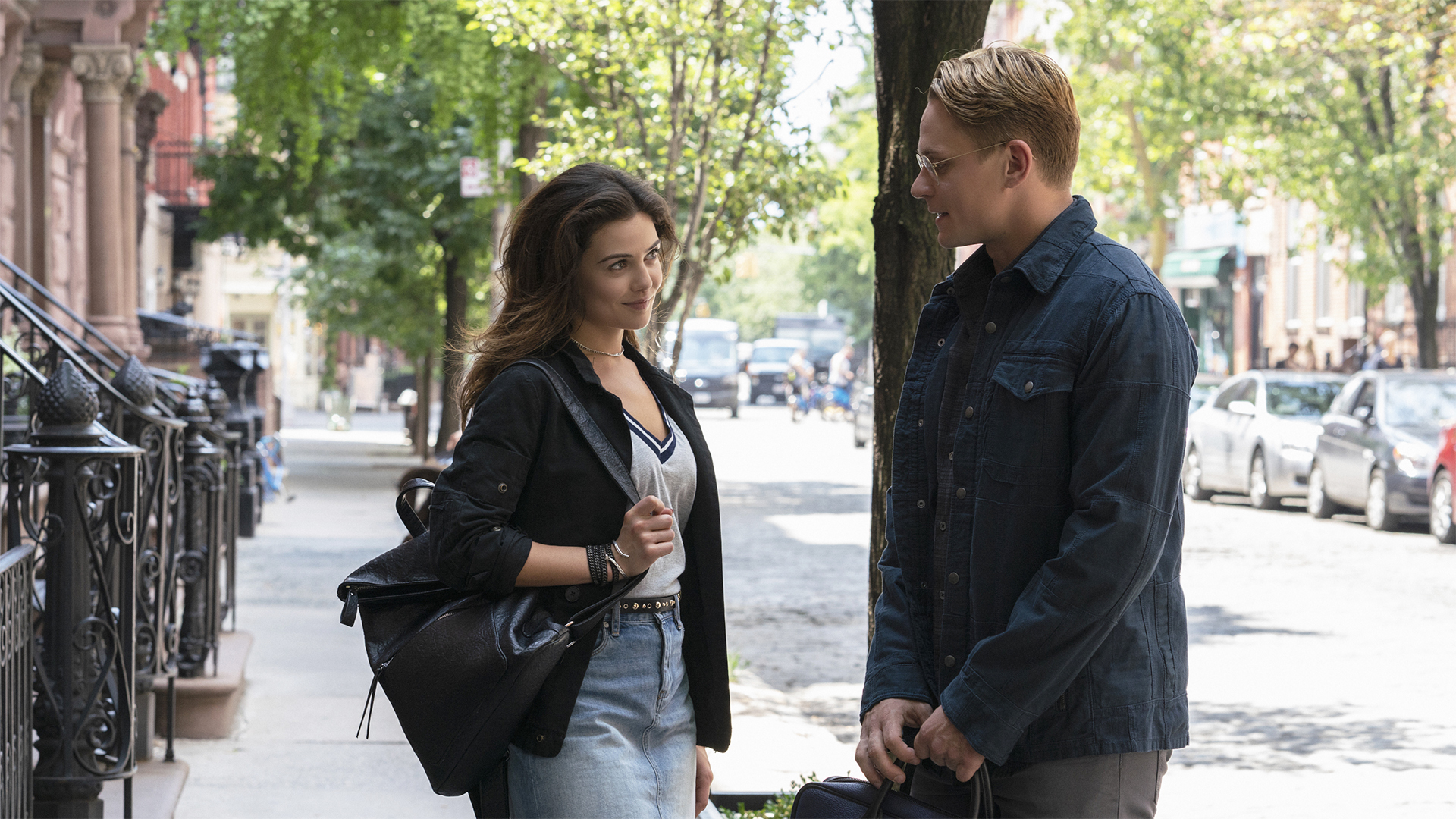 Last week on Tell Me A Story, the games only began for our twisted fairytales. Feel free to catch the review of TMAS, Chapter 2: Loss here. Some are on the run. Some are desperate for revenge. And some, are playing with fire. This week, greed comes in different forms to these three fairytales that are quickly becoming one. Greed for revenge. Yearning for more comfort of the dangerous kind. Desperation to get what’s owed.

Pigs on the Run

Jordan (James Wolk) attends Beth’s (Spencer Grammer) funeral. My heart seriously breaks for him, especially when he spews the statistics on the likelihood of Beth’s murder getting solved. It’s slim, guys. Jordan’s friend—also Kayla’s father—takes a moment with him to try to calm him. Jordan confides in him that he has found one of the pigs. He has found Eddie (Paul Wesley). Is Jordan going too far, or not far enough?

In a downward spiral of grief that’s turning darker by the minute, Jordan is seriously losing his shit. The parallels between him and Eddie are actually pretty impressive. Both of them are suffering from what happened that day in the jewelry store. Their mental grasp on their lives is slipping away little by little. 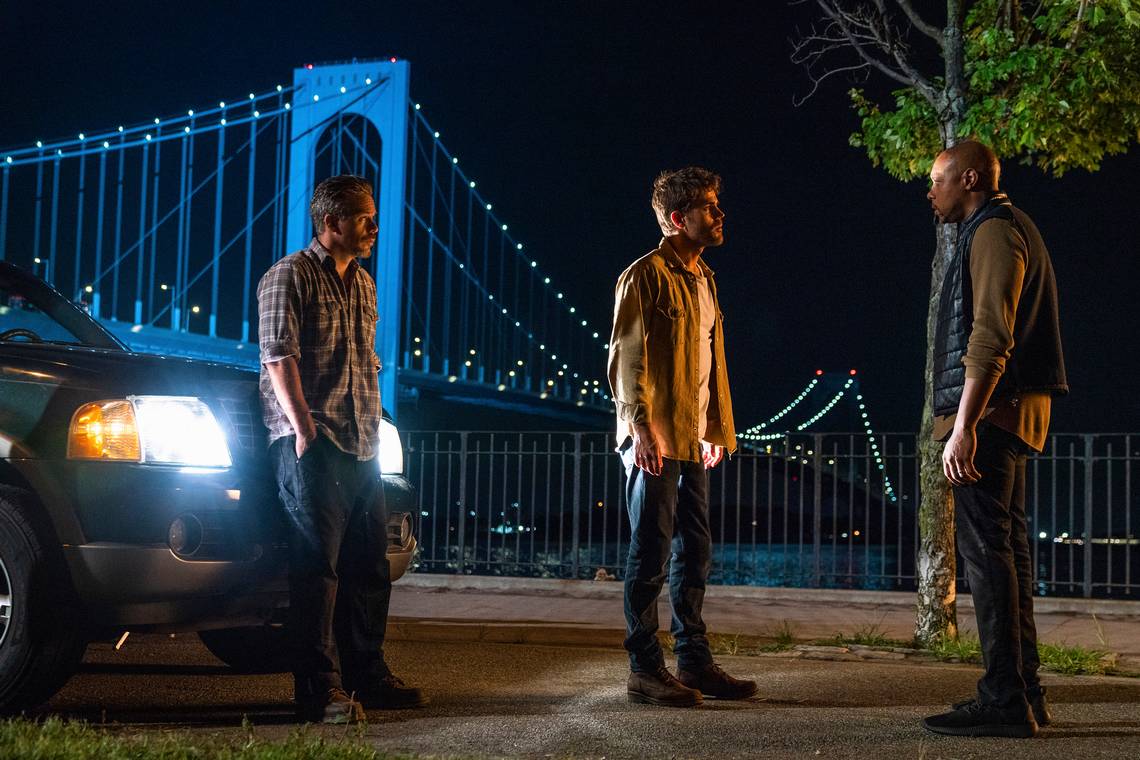 Tell Me A Story via IMDB

Eddie seeks Mitch (Michael Raymond-James) out for his cut from the robbery. He’s ready to run, though he owes a few people some money still. The brothers meet up with Sam, the robber responsible for Beth’s death, and he takes out his antsy impatience on Eddie, threatening to shoot him if he sees him again. This man is not playing around.

Jordan begins his hunt on the three robbers, starting with breaking into Eddie’s double-wide. Things get dicey when Eddie arrives home with him still inside. I know I held my breath during this entire scene. Anybody else? (And don’t think I missed that bong rip, Wesley. That was dope. Just saying. I’d need a rip, too, if I was that paranoid.)

When the opportunity presents itself to get the jump on Eddie, Jordan just isn’t ready to pull the literal trigger. On the one hand, good because that can’t be undone. One doesn’t typically undo death. On the other, there’ll be a time when Jordan’s ready.

Hansel and Gretel Get Desperate

Hannah (Dania Ramirez) is back at work but is still looking over her shoulder, wondering when she and Gabe (Davi Santos) will get caught for murder. It gets so bad that she tenses when two police officers come into the gym, but they just want to get a workout in. Gabe is leaving his roommate to move in with Hannah because unlike that asshole, he’s got a conscience and can’t act like they didn’t kill a guy. Good move, Gabe.

From the news, Hannah and Gabe discover that the guy who died was moved before he was found by the police. Somebody knows what they’ve done. Hannah and Gabe investigate, starting with the phone they took off the guy’s body. Gabe doesn’t want any part of it and only wants to let it go, though it’s obvious it’ll haunt his sensitive soul for the rest of his life. Diving in deeper can only lead to worse things for them and I agree!

However, Hannah goes investigating with the storage key that she also lifted from Mr. Dead Guy and discovers a massive duffel of cash. Leave it alone, girl! But, she doesn’t and instead takes it home where Gabe further loses his shit because he knows the dark world of drugs and that this is some heavy-duty dirty money. Hannah won’t let them suffer on the edge of poverty anymore though. They’re keeping it, because, in her opinion, it’s time they got their happy ever after.

The tale of poverty and desperation isn’t unheard of and melding it with Hansel and Gretel is quite fitting. TMAS has done a magnificent job in really pushing the boundaries of these siblings who’ve already hit their limit. They’re now fighting for what they want and their lives. However, one of the universal questions comes to mind, and it’s not one of those easy ones to answer.

Is this okay? After everything they’ve been through, do they deserve this? What gives them this right to just take the money for themselves? Personally, I say take it and run! It’s not clean and what you do to keep it isn’t going to make it dirtier. 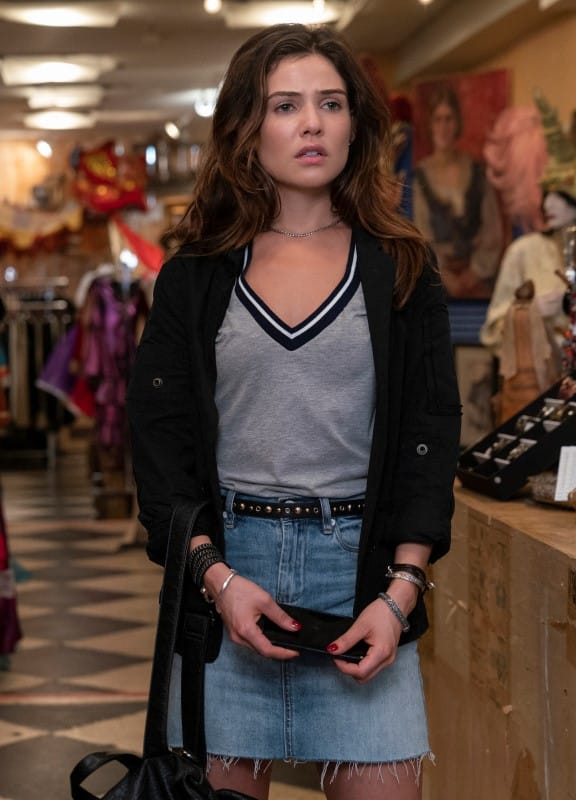 Kayla’s (Danielle Campbell) phone is being held hostage by her grandmother, and in this tech-driven world, that’s like having your arm chopped off. Honestly though, Kim Cattrall is one badass woman. Perfect in this role. These two leading ladies are phenomenal scene-stealers. I absolutely love them. And you know what, some people get hot moms. Kayla’s got a hot grandma. And this grandmother, Colleen, owns an impressive costume shop that caters to the movies, Broadway, and everything star-worthy.

Gaining some background on the Powell family through her grandmother grants a bonding moment and that’s something I can deeply appreciate, especially if it leads to good things, like showing trust. It really propels a show forward and creates a deeper attachment to the characters and between characters.

Kayla, disgruntled about her punishment to watch after the costume shop dealt by her grandmother, “runs” into Nick (Billy Magnussen) on the way there. While he’s still playing coy about not wanting to get in trouble for getting too close to her, we all know what’s going on. He’s totally playing her, though letting her think she’s the one playing him. I’m not falling for it. Nope.

A visit from Ethan leaves a sour taste not only in Kayla’s mouth but mine too. He’s one hell of a creep. Though, I resent it—

“It’s like we’re a triangle on one of those teens shows on a network I don’t watch.”

—is quite hilarious with TMAS on one of those networks at the moment. Goosies arise when Ethan doesn’t take Kayla’s brush-off well and sneers about how he knows about her having sex with Nick. Seems like Laney doesn’t know how to keep her mouth shut and Kayla should find more trustworthy friends. Though such a betrayal isn’t surprising, it does stir things up quite and bit and that’s what this show does.

After a hellish showdown between said friends, Kayla is desperate to apologize to Nick about their secret nearly being revealed. Of course, we can all see it’s just an excuse. Still, the tension between the two is dangerously thick, revealing the most relevant theme of the fairytale: the nature of the big bad wolf seducing Red, a young and supple child. Because, yeah, Kayla is still underage! Yet, the two can’t help themselves and once again are rolling around in the sheets. All I know is that it won’t be long before somebody gets seriously hurt.

More connections are made. Hannah and Gabe are officially connected to the three pigs through their dead guy’s phone, connecting themselves to some seriously deadly drug lords that represent the evil witch from Hansel and Gretel. Red finds herself in a tight bind that could destroy not just her life but Nick’s too. Jordan hasn’t killed any of the pigs (yet), but Eddie is at the top of his list.

The true colors of these characters are being revealed, and I find it particularly fascinating how they shift with their most desperate desires and darkest dreams. Just how far will these people go, especially when it’s too late to turn back?

It’s hard to choose which story is turning out the best, especially when you’re only three episodes in and all of these tales are blending together to become one really fucked up one. Truthfully, I’m really loving the wait factor. I hold my breath to see just how much more screwed up things are going to get and seeing just how far these characters will go for their desires. Getting to rewatch Tell Me A Story is a blast and so much fun for my morbid brain.

What did you think of the episode? Lett’s chat in the comments below and don’t forget to follow us @capeandcastle on Twitter and geek out with us about other shows you love!