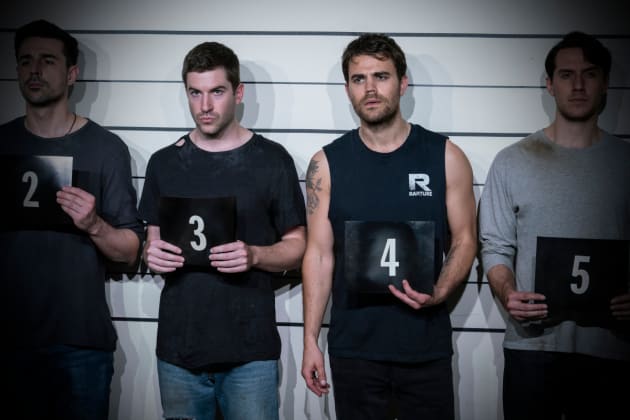 The premiere episode of Tell Me A Story last week only introduced us to the stories we’ll be seeing unravel in this deliciously depraved show this season. Feel free to catch the review here: TMAS: Ch. 1 “Hope”. Now, we really dive into the twists and turns. Here. We. Go.

Tell Me A Story via The CW

The Big Bad Wolf is Born

After losing Beth (Spencer Grammer), Jordan (James Wolk) is lost and drifting away fast. One thing becomes clear fast. Revenge. And the three little pigs aren’t doing too hot either. While Eddie (Paul Wesley) begins to drown in guilt for Beth’s death, his brother, Mitch (Michael Raymond-James, True Blood) is sure he can calm him down. Of course, that means just blaming him and his drug abuse for the bullet he took to the arm. Nice family, eh?

Not sure I can really blame Jordan for his mental breakdown and with getting a front-row set to it, it becomes understandable. When the person in your life that’s the sun of your universe suddenly vanishes like a permeant eclipse, what do you do, especially when the justice system lapses over it? While he begins to hallucinate Beth and that she’s still with him, it’s only a matter of time before he really snaps. That wild look in his eyes is even frightening dogs. But hey, revenge creates monsters out of us all, right?

When it comes down to a traumatic event like this it can be hard to walk the line between justice and revenge. Jordan is ready to take his own justice and he knows Eddie will get him there. Shaken up and a nervous wreck he’ll crack.

And, on a side note, I have to give applause to Paul Wesley on his performance. Typically seen as a white knight due to his most popular role as Stefan Salvatore from The Vampire Diaries, his portrayal as the paranoid little pig is fantastic! Truly phenomenal here in TMAS. So much love.

Little Red and the Substitute Teacher

Kayla (Danielle Campbell) is still reeling from discovering that she slept with Nick (Billy Magnussen) AKA the recent substitute teacher. While Nick is seriously disturbed, Kayla is sure that their get-together is a one-time deal. But, let’s be honest. We know it isn’t. That girl is hooked on the dangerous thrill it gives her.

Though Kayla is all for dipping out on school to get to know her new friends, she refuses to share too many secrets of her own, like why she moved in the middle of her senior year. Good thing Kayla knows how to create a distraction because she easily stirs up trouble in a hot tub with a kissing math game that allows her to break away unnoticed. Sneaky sneaky, Kayla, and quite genius. Too bad it’s not that easy at home.

The tension continues to build between her and her father and I’m officially curious about it, especially since Kayla blurts out how he hated mom. Did your eyes bug out? Mine did! What happened before mom died that would cause such turmoil? In any case, it’s obvious Kayla was more attached to her mother than father with her outbursts and rule-breaking.

She can’t help herself but find her way back to Nick. The dangerous potential being both scary yet alluring isn’t completely unheard of. It does however highlight how it’s no joke or game for a minor to toil around with an adult, not like this. Not ever. It’s not some romantic notion. Believing that you’ve found somebody to trust and confide in could also be somebody who may use it against you later to manipulate you. Of course, Kayla doesn’t see that right now. I wish I was surprised by that. Alas, I am not. Grief can mask danger and the grief of losing her mother is doing just that.

Tell Me A Story via The Nerdy Girl Express

Hansel and Gretel on the Run

Gabe (Davi Santos) and Hannah (Dania Ramirez) do research on the man that Gage killed and left in the hotel room. They discover he was a drug launderer and worse. Though feeling guilty, Gage is glad he called his sister and is able to rely on her. I’m glad he called her too. She is quite the badass.

In this version of Hansel and Gretel, the siblings don’t want to leave any crumbs for anyone to follow. Probably a good thing. Too bad that Gabe tried to take himself out of the equation as well by overdosing on drugs. It’s lucky for him that his sister is there to look out for him. She doesn’t even let his roommate, who got them into this situation, get near him. Sibling goals!

One of the most interesting twists of this week’s episode of TMAS has to be that the three little pigs aren’t innocent at all but in fact guilt of incurring the wolf’s wrath and deserving it. Let’s not forget that Little Red Riding Hood is also a wolf in a red cape as well, though if she’s not careful she’ll get snared by a bigger, badder wolf. Meanwhile, it seems like Hannah, the independent and strong woman, is on the path to protect her brother from all that endangers, and the lengths she’ll go to are only just being discovered.

What did you think of this week’s episode of Tell Me A Story! Let’s chat in the comments and don’t forget to follow us @capeandcastle on Twitter.