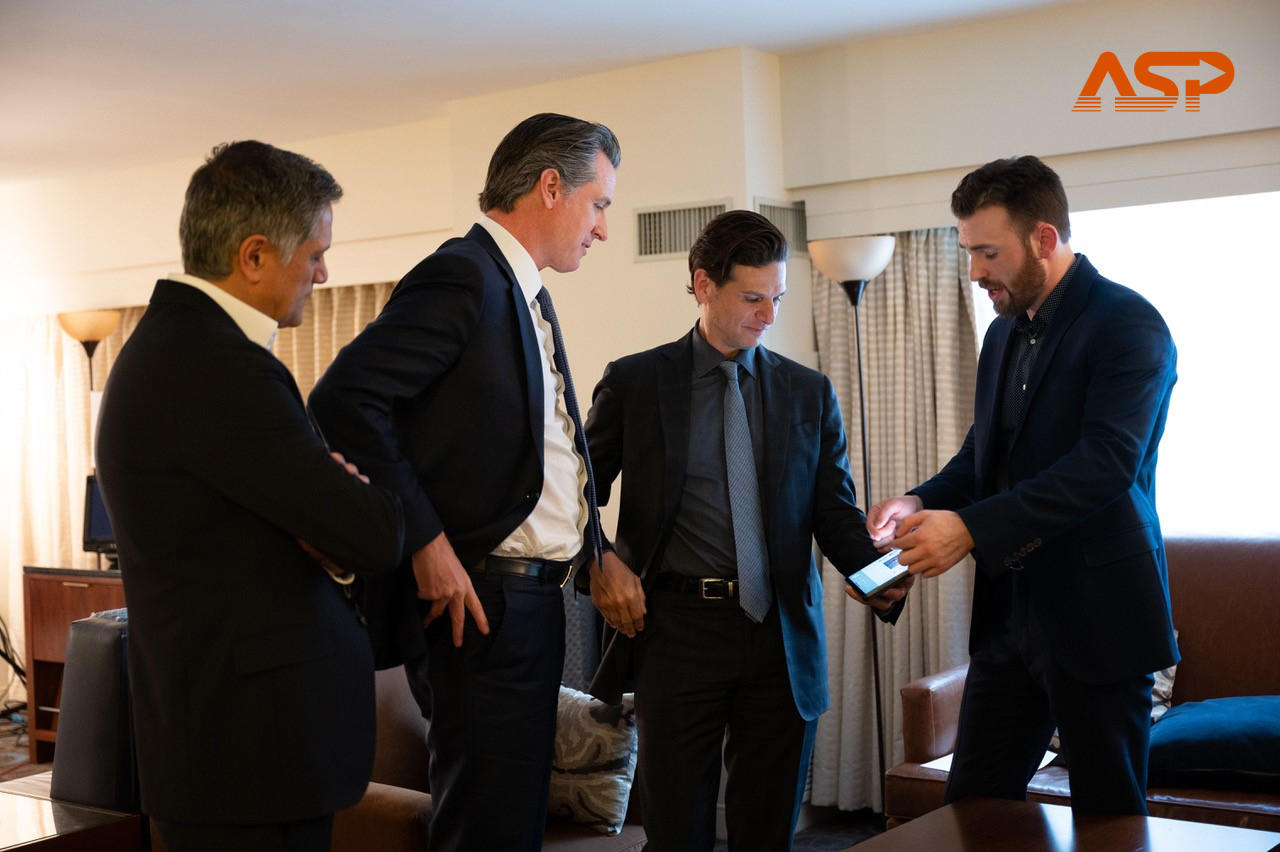 Chris Evans, a remarkably skilled actor perhaps best known for playing Captain America, had an ambitious idea for a site that could help inform many people. He and his co-founders were met with skepticism along the way, but continued to pursue an idea they knew had merit. They were focused and tenacious in pursuit of their goal and were open to evolving and expanding the idea as they learned how best to allow the site be of service to people and keep elected officials engaged in participating. The site will continue to grow as additional politicians make the choice to be involved.

Today’s the day!!!! After two years of work I’m SO excited to finally launch ASP! 😬🤮
Our panel w @FastCompany goes up in a couple hours. Hopefully we answer any questions you might have! @MarkKassen @JoeKiani @MiaCharity @ASP #AStartingPoint pic.twitter.com/NFnPFC5UgI

The idea for A Starting Point was born a few years back when Chris Evans was watching the news and turned to the internet to look up a term he didn’t understand. Met with an overwhelming amount of information from all sorts of sources, he thought there should be an easier way to get answers. A site where people could go to get quick, succinct answers from the people who are actually in office.

He reached out to friend and frequent collaborator, Mark Kassen, to flesh out the idea before inviting politicians to participate. Initially met with skepticism and little response, they brought Joe Kiani on board to help reach out to people in office. Finally, people took them seriously and started to respond. Over the next couple of years, they compiled interviews with several politicians across both sides of the political aisle. Whenever Chris Evans showed up in Washington, D.C. twitter was flooded with tweets from the people he met with. Today over 150 of our nation’s leaders are featured on A Starting Point.

The website is extremely easy to navigate. When you visit A Starting Point you are first met with a video from it’s co-founders, explaining the journey they took to bring the site to life. 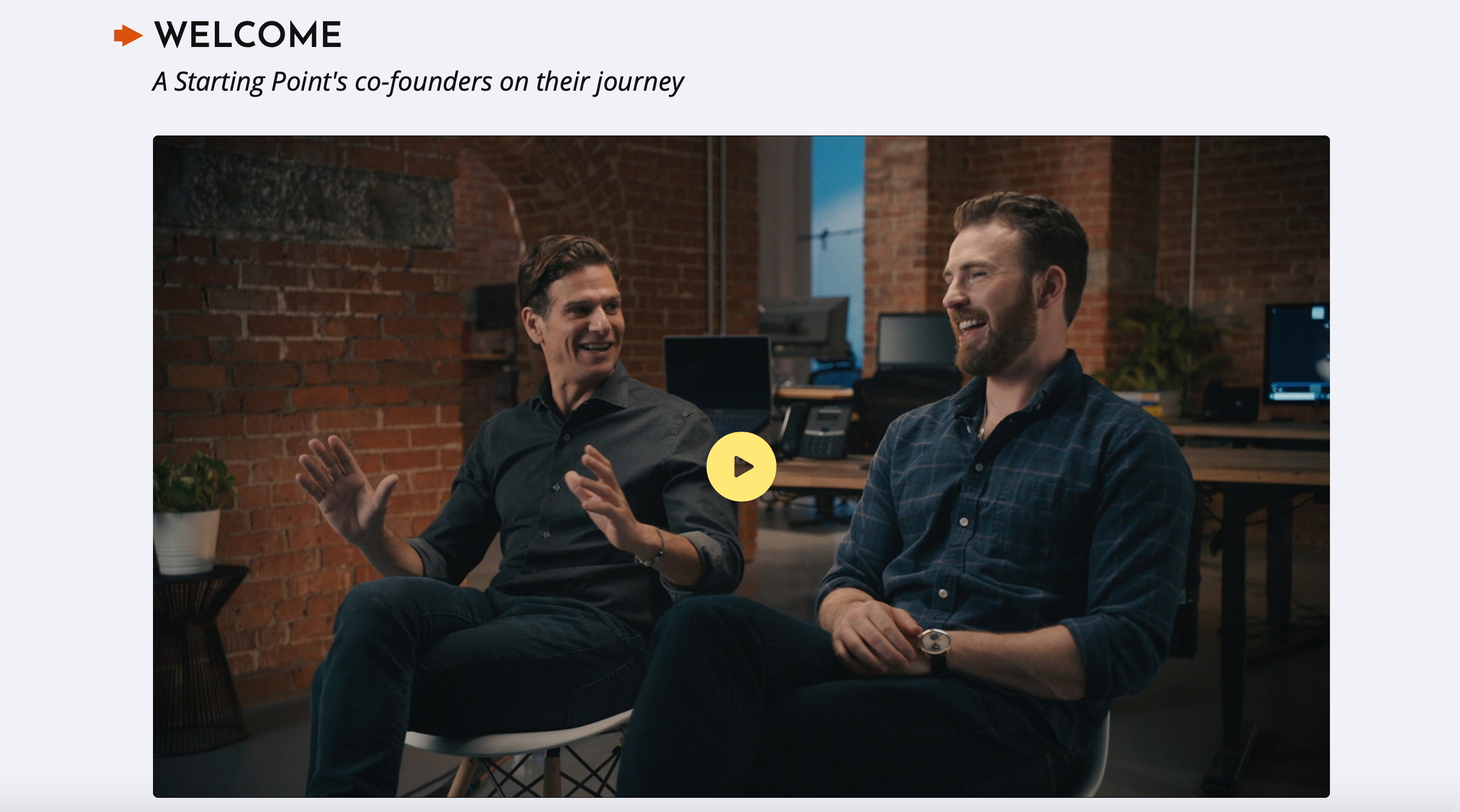 They were adamant about two main essentials from the start. The site had to be bipartisan, with every issue addressed by an equal number of both Democrat and Republican voices. The answers also had to be brief. The point is to make information easily available, easy to find, and easy to digest.

The first section after the welcome is called Starting Points. This section includes 2-minute answers from elected officials. 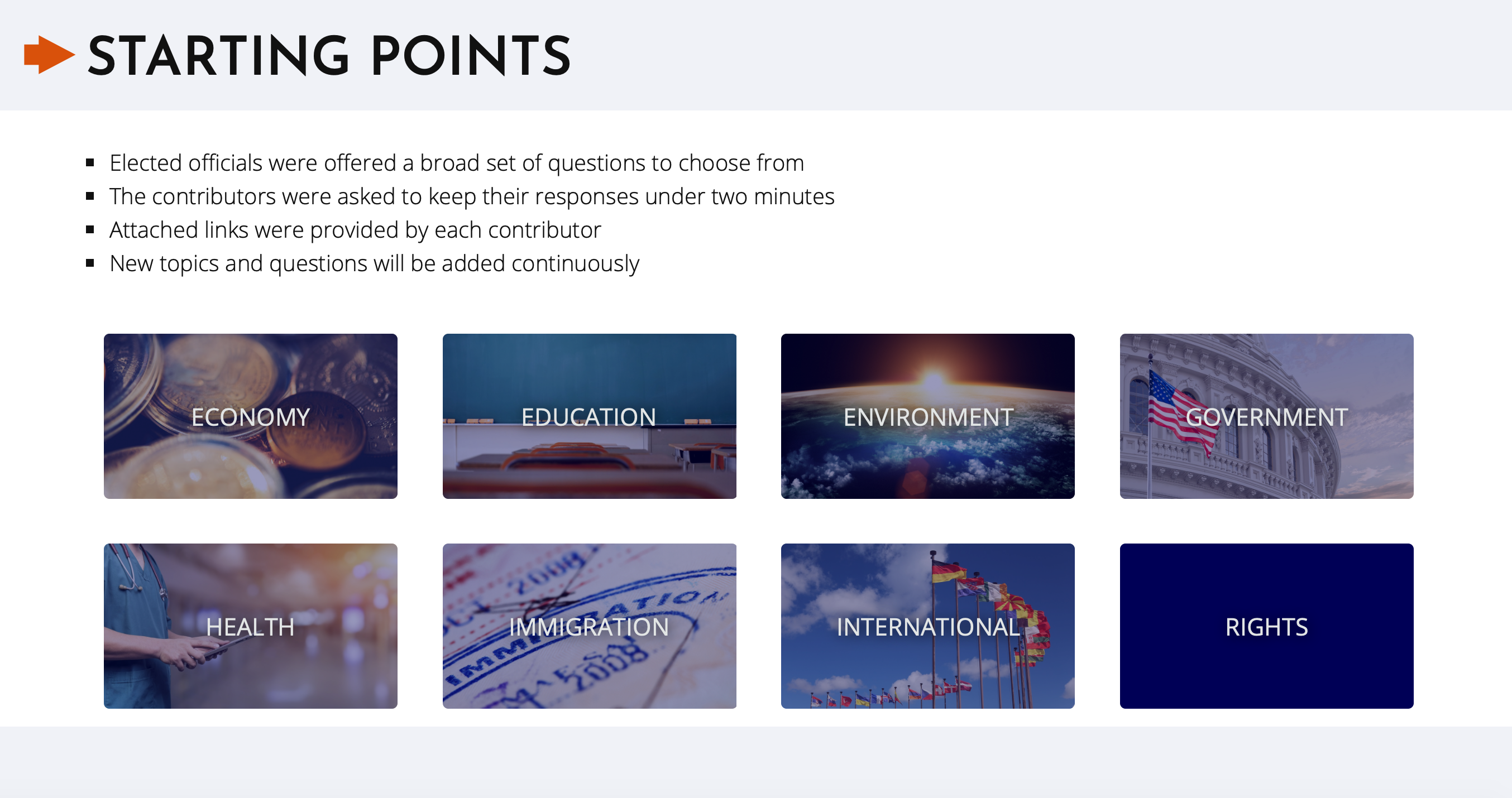 When you choose a section, you are given a list of the questions the were posed. Choose a question, and you are presented with the 6 officials who answered the question. For each question, there are answers given by three Democrats and three Republicans.

ASP is now live! Thank you @RepSwalwell and @RepArrington for being the first official post-launch Daily Points! Go to https://t.co/5vEi5C7WHV to see more!! pic.twitter.com/nyENS6omD7

The second section is called Daily Points. Here, elected officials have the opportunity to post videos discussing whatever issue they’d like to address. Each video is less than a minute long.

The third section is called Counterpoints. A section devoted to exploring issues a little deeper. The discussion goes back and forth between two different points of view with each side also making a closing point. 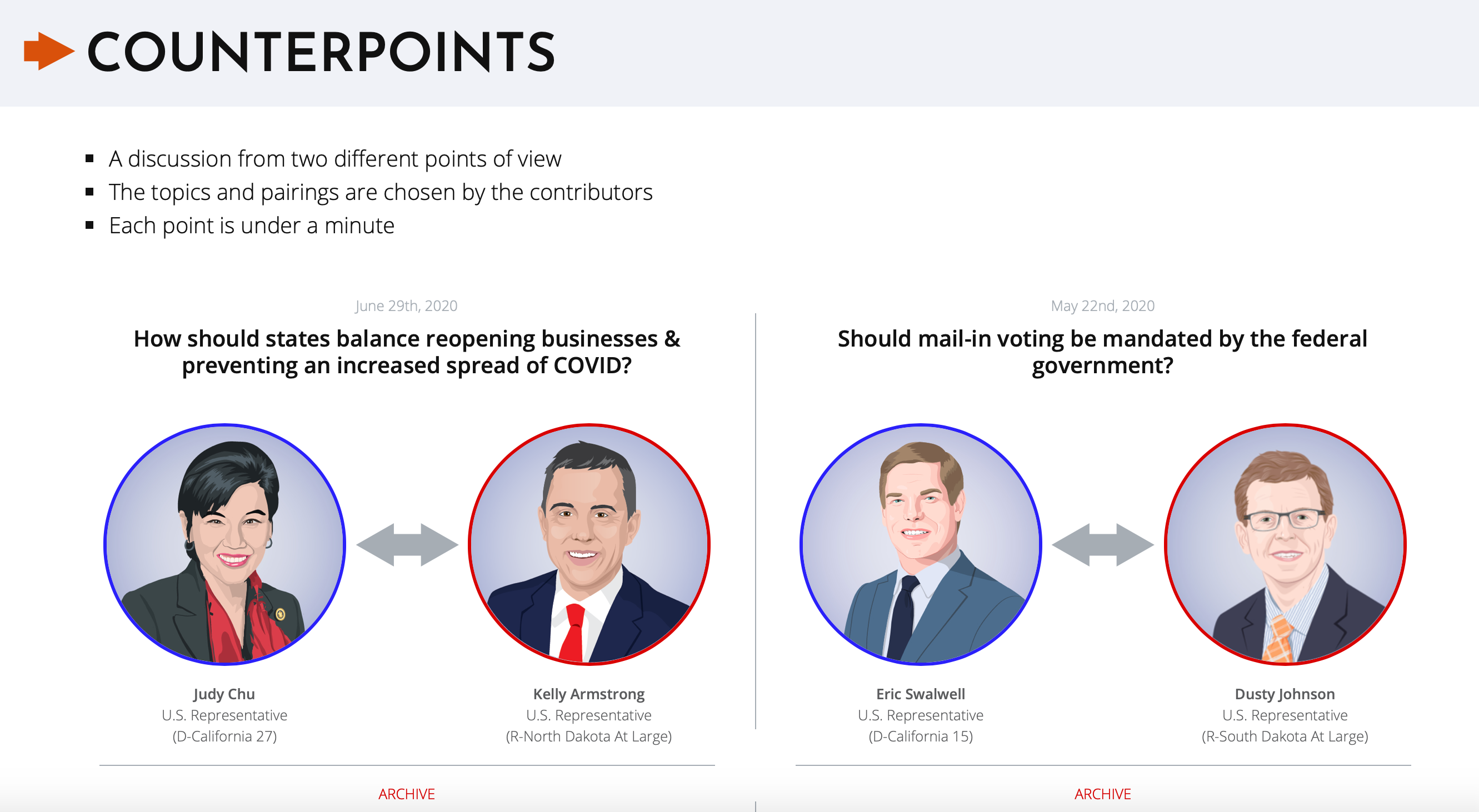 The Rest of the Site

A Starting Point offers a way to navigate directly to the voices you want to hear. You can search by political affiliation or by position. Over 150 elected officials, from members of Congress down to local Mayors have participated. Several past presidential candidates are also on board.

The goal of A Starting Point is an admirable one. They are trying to create a more informed electorate. People who are generally uninterested in politics are unlikely to sit through long speeches and do extensive research. Here, one can find quick, direct answers to issues they find personally relevant. There is also a way to search for your specific representatives based on your zip code as well as a link to register to vote.

The team behind A Starting Point has been working on this civic engagement site for a few years. The site went live yesterday followed by an official launch panel today. The webinar, hosted by Stephanie Mehta of Fast Company, saw Chris Evans, Mark Kassen, and Joe Kiani, answer several questions about the site and it’s mission. They were also joined by Mia Charity of Close Up, their education partner in the project. If you missed the panel, a replay of Behind the Launch is available to view if you click here. Take a moment to check out the website, or at the very least, watch the introduction video to learn what it’s all about.

"Over 2 years ago we began interviewing members of our government in D.C. Now with the help of 150+ elected officials across party lines & levels of government, we are proud that #AStartingPoint is live."@ChrisEvans @MarkKassen @JoeKiani 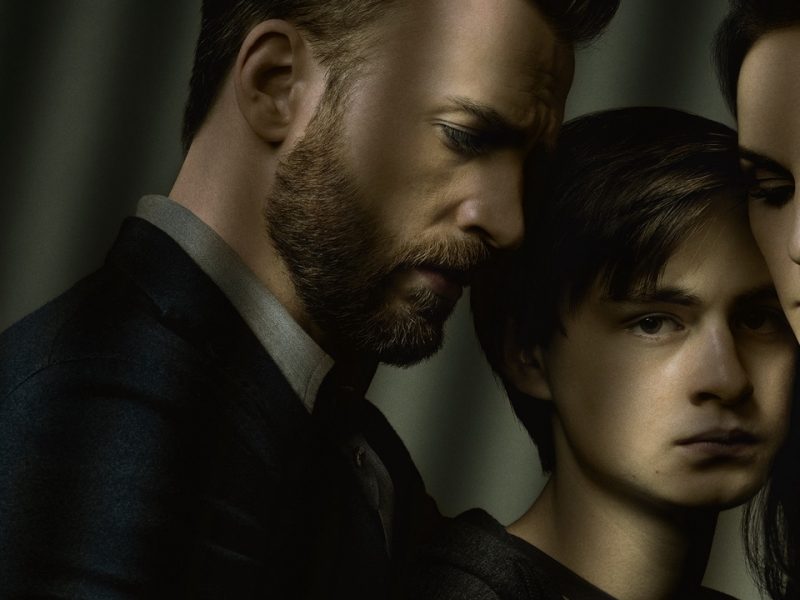 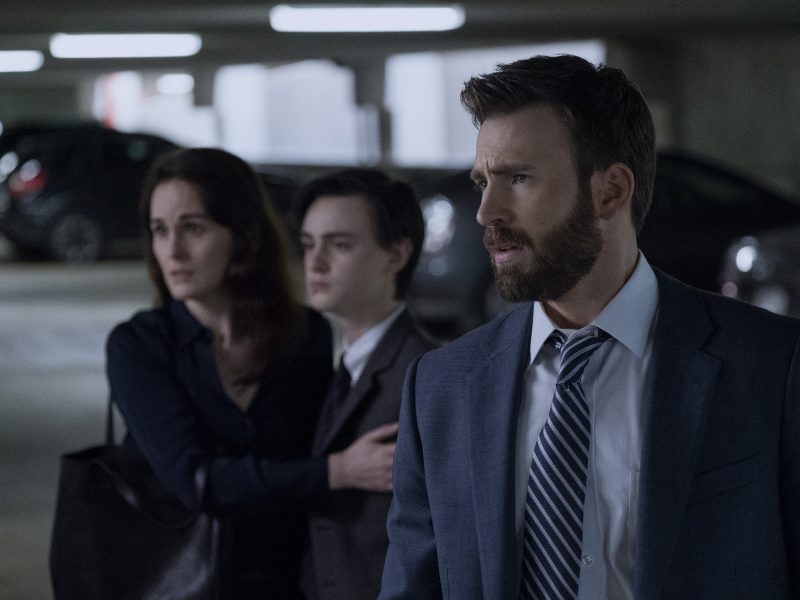