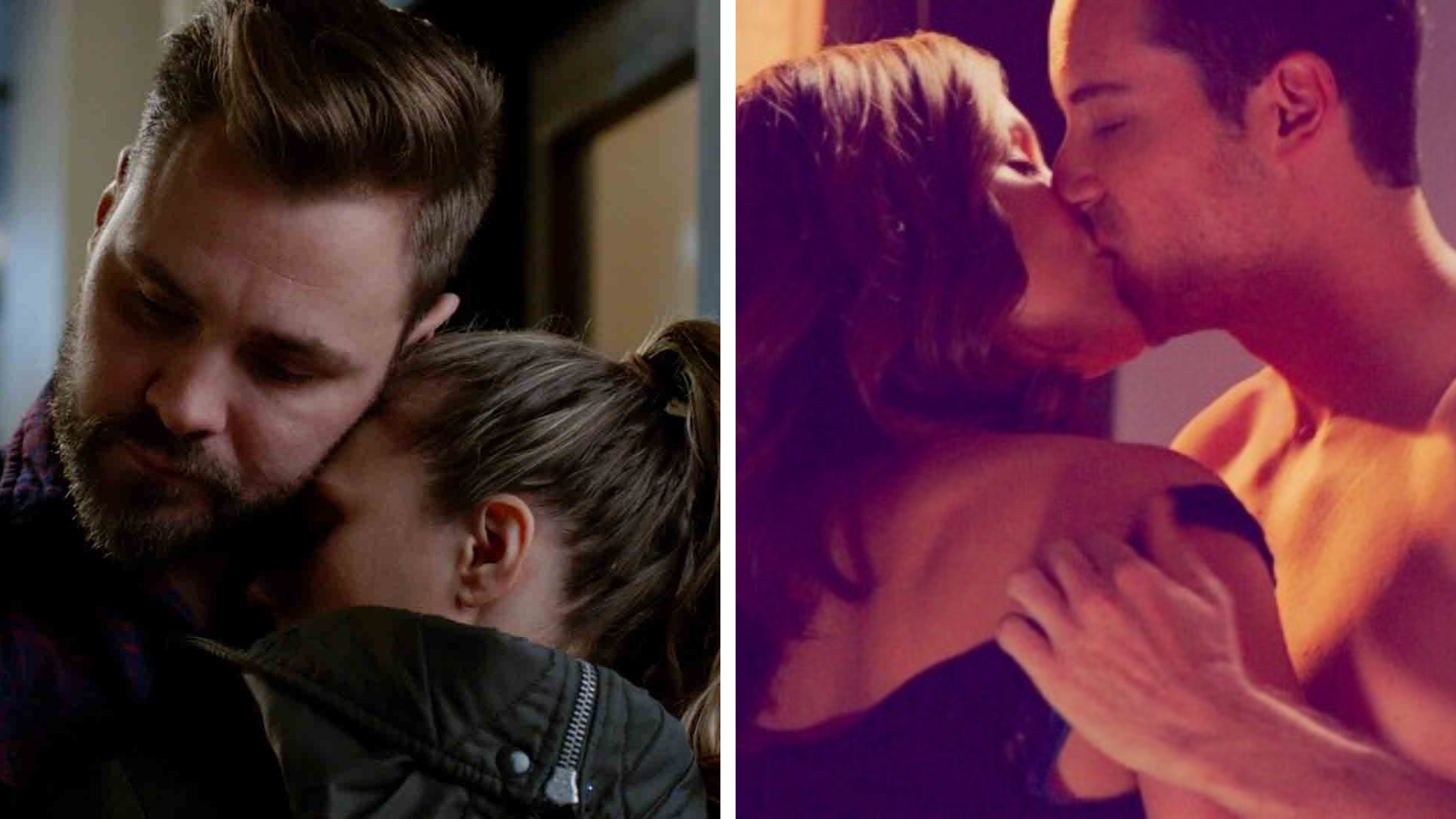 ‘Chicago P.D.’: Why I now ship Upzek, and why I still ship Linstead firmly

Yes, I am well aware that I’m going to get hate for this. But you know what? Bring it the fuck on. I ship who I ship. No one can rock my boat. (Same goes for you — I’m not trying to rock yours, so.)

When I first binged seasons one through four of Chicago P.D. (I’ve mentioned before that I just got into this fandom no more than a month ago), I avoided any episode from when we find out that Jay Halstead (Jesse Lee Soffer) was married, onward. So, naturally, I never reached the episode where Hailey Upton (Tracy Spiridakos) was introduced. I didn’t want to give it a chance at first, because at that point, I already knew about Upstead being a thing. I was stubborn as fuck — I just wanted to stay in my happy Linstead bubble forever. But then I got my mother into the show, and she really wanted to watch past the fourth season. And so I watched all of it with her.

I admit, I had mixed feelings about Hailey at first. To me, they made her so damn similar to Sophia Bush’s Erin Lindsay (not that her being a lot like Erin is necessarily a bad thing — it’s flattering, really) and, to not make things any better, they immediately paired her up with Erin’s ex-boyfriend/ex-partner. I was ready to trash the show, until I heard about Hailey with Adam Ruzek (Patrick John Flueger).

Yes, I know what that sounds like — I didn’t like her at first, because she likes Jay. You’re not wrong. But I gave her another chance, because I really wanted to like her — just like I gave the show another chance past season four because I really missed the ethos of it — eventually, I changed my mind. While I still don’t like her around Jay (romantically), I do like her around Adam (also romantically), because she was such a different person — her being with Adam shook off the shadows of Erin and Linstead.

At first, of course, I was against Upzek being a thing, because I shipped Adam with Kim Burgess (Marina Squerciati). Just this past May, when I first got into P.D., Burzek fell second in my list of One Chicago ships (right behind Linstead). However, this should-they-shouldn’t-they bullshit that has been going on for seven fucking seasons now has got me tired. Not to mention, their pregnancy and miscarriage fucking hurt. Un-fucking-necessary.

With that, I ended up jumping the Burzek ship. And since jumping ship, I’ve embarked on the Upzek ship. To a lot of you, I know, it’s blasphemy. But I’m not sorry. I know that I’ve boarded a sunken ship, but frankly, I don’t give a shit — I mean, I’m still captaining Linstead, who, after finally catching up on all seven seasons of P.D., I actually ended up shipping more than I already do. I’m sinking myself down into both ships, and I’ll stay down forever if I have to.

Let me just set the record straight, though: I tried to ship Upstead. I did. I honest to God, fucking really tried. But I just can’t ship them, even if I wanted to.

I mean, ask around. I wanted so badly to be one of the cool kids, to be part of the (probably) majority who have long accepted that Erin was never coming back and have moved on to Upstead, some shipping them more so than they ever did Linstead. I admit that I was afraid at first — afraid that I would end up actually liking Upstead and, even worse, liking them more than Linstead, if I kept going past season four. I didn’t cave in to season five until what felt like ages later, but when I finally caved, and upon trying and trying, I just couldn’t get into them.

I felt relieved at first, mainly because that meant that Linstead would still hold significance. Obviously, not everyone sees what I see. But just to say what I do see, I don’t — I don’t see the romantic chemistry that everyone else is seeing. I mean, I can’t deny that they’ve had some really cute moments, like this one:

They also have the cutest dialogue (e.g., “I’d follow you anywhere”; “You looked at me and I got it”) — even more so than Linstead. But Upstead’s chemistry just doesn’t scream romantic to me, even if canon is telling me otherwise.

Honestly, Upstead to me comes off similar to how Chicago Fire’s Kelly Severide (Taylor Kinney) and, (rest in peace), Leslie Shay (Lauren German), were — so much love between them, but nothing more than best friends / siblings to each other. But like I’ve stressed more so than I should, that’s just me.

However, I genuinely do love Upstead’s friendship, if it’s any consolation. I’m totally all about platonic Upstead because they totally have friend chemistry. Rick Eid (who took over Matt Olmstead’s role as showrunner around the same time as when Sophia left) is doing one hell of a job with both Upstead’s character and friendship developments.

I disclaim that I mean no offense to Upsteads when saying what I’m about to say, and that’s that they don’t have passion — spark — to me, especially when they’re supposed to be flirting and bantering. It just doesn’t come out right to me. I’m sorry, Upsteads! (hides behind Linstead Couch)

Lack of romantic chemistry aside, I might feel differently about Upstead if Hailey didn’t immediately step into Erin’s shoes as Jay’s partner and as his love interest. Also, it would’ve been nice if they hadn’t done a time jump in season five so that we actually got to see more than just one episode of Jay grieving Erin. (Although no one can convince me otherwise that him accidentally shooting that little girl and him “falling in love” with Camila had everything to do with Erin leaving.) But the fact that Hailey was partnered up with Jay right away (setting aside that one time when her and Erin were partners) and they were already pretty tight, well. They really didn’t even give me time to breathe.

As aforementioned, I really did open up my mind and I tried to ship Upstead, because let’s be honest: it’d be a little fucked up that Jay not be with anyone after Erin (or, Camila, because I actually found his PTSD arc a good one). But, seven seasons in, I’m still very much a Linstead shipper — even if it means that I have to forever imagine how the show would go on if Erin was still around, so be it.

To me, no One Chicago couple can ever hold a candle to Erin and Jay. Linstead just had the passion and the spark — to this day, I keep looking for either or both in Upstead but, nothing. Linstead’s romantic chemistry was felt and reached and, yes, I probably should be thanking Sophia and Jesse for dating in real life, but off-screen aside, Linstead was just more fun.

I get that they had to kind of reinvent Jay’s character sans Erin but, I can count the number of times that Jay had something funny to say in the latter seasons (five through seven), while during the first four seasons, I lost track because Jay always had a line up his sleeve, and to top each cake, Erin herself usually led or followed up what Jay said with something fucking hilarious, like this:

Even when they didn’t say anything, their flirting was on point:

Every time, no matter the interaction, it would come out natural. Erin and Jay just had a repartee with each other that was unlike that of any other couple on P.D.. Like I said, I’ve looked for it up and over Upstead and, unless I’m blind, I’m just not seeing it.

The wit, the sarcasm, the quick back and forth … though each conversation is different, it’s a one-way street with Hailey and Jay. Whereas with Erin and Jay, they made me laugh a shit ton when they were together. As a Linstead friend of mine so intellectually puts it, Erin and Jay exhibited properties of magnetism: they attracted each other, aligned themselves with one another … when he moved, she moved, and were always in perfect sync.

From their first second together in the pilot episode, I was already able to tell that Erin and Jay were going to be epic. Erin may be gone, but her relationship with Jay, incomparable.

As with Upzek, well … like I said, I didn’t even ship them right away. In fact, I initially thought that the idea of Hailey with Kevin Atwater (LaRoyce Hawkins) would’ve been genius. Yes, at first, I only wanted Hailey and Kevin together because of process of elimination, but then I started thinking about it, and realized the wide array of potentially interesting story arcs they could’ve done with two such diverse characters such as Hailey and Kevin. That, and the fact that Tracy and LaRoyce are close in real life and it would’ve translated well on-screen.

But when I found out that Upwater was nothing more than theory, headcanon, whatever (they barely interact with one another), it was around the same time that I saw Hailey and Adam’s scenes together for the first time, and let me tell you, Upzek surprisingly had me smiling. It all started in season five for me, when Adam hit a perp for calling Hailey a bitch, and Hailey gave him shit for it. Right then, I was hooked. I fell in love with Upzek, mainly because it was refreshing.

I think some more screen time that could’ve been dedicated to this couple and their budding romance was wasted, to be honest. Like Jay, Adam did a lot of growing up in the latter seasons, so it was exhilarating seeing Adam in a relationship where he’s not wanting to get married for once. (He just wanted to one day live with Hailey — that’s progress!) It was also nice seeing Hailey get emotionally involved for the first time, and she got herself there, all while being with Adam. They might not have had a lot of buildup, but they sure had a lot of potential … again, wasted.

But no matter the fact that both of my P.D. ships have now sunk, both Linstead and Upzek made an impact to my heart, and there’s no rising back up to the surface. For once, I’m in the minority here, but finally, I’m okay with it. Because at the end of the day, I like Hailey Anne Upton and I still ship Linstead, and that was the goal all along: to accept and, eventually and finally, like Hailey as a character, and to preserve my love for Erin and Jay. Thanks to my newfound love for Upzek, the mission was accomplished.