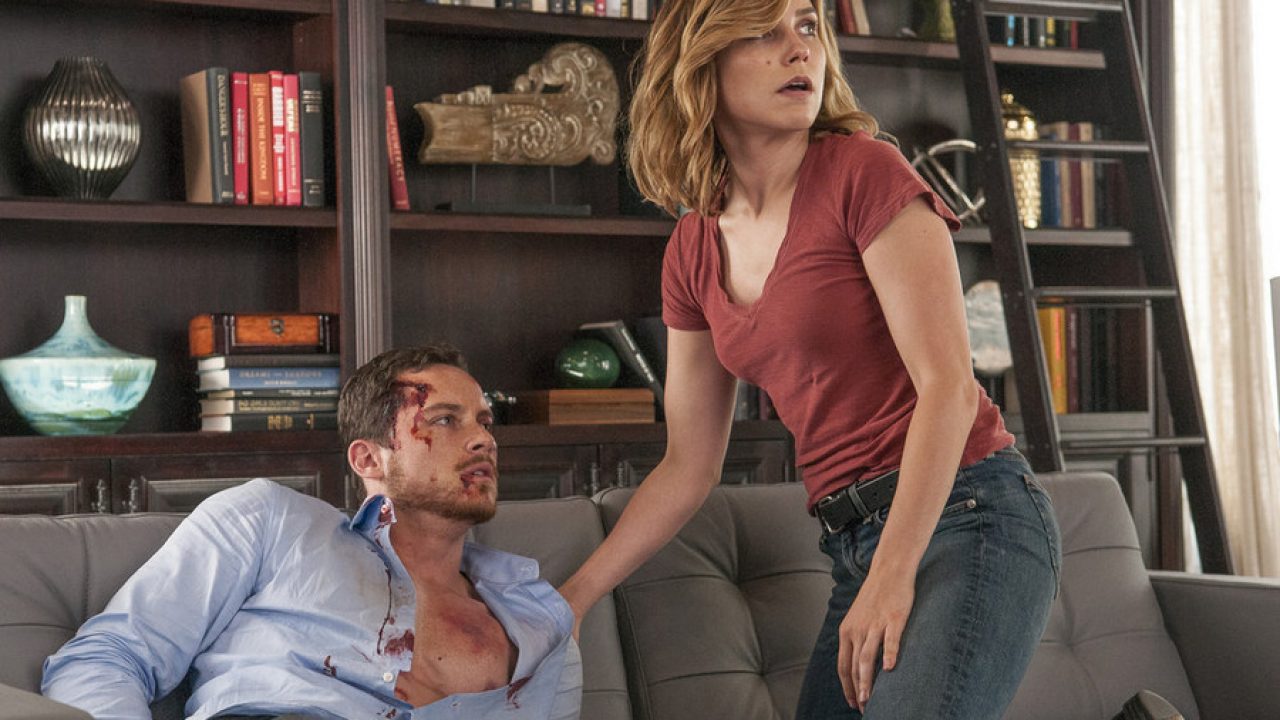 If you are all three/either one of the three, a Sophia Bush, Erin Lindsay and/or Linstead stan such as myself, then you probably haven’t fully recovered (or at all) over her abrupt departure from Chicago P.D., just three seasons ago. Although I just got into Chicago P.D. earlier this month, I knew what I was getting myself into — I went into watching the series knowing that Sophia had left, and that Erin had left her soulmate/love of her life, Jay Halstead (Jesse Lee Soffer), behind for an FBI gig in New York.

As painful as her final season was, it was also just as rewarding — albeit her tenure in Chicago was brief, the story of Detective Erin Lindsay was definitely one for the books, and not just because she was played by Sophia. She’ll always be my favorite badass, feminist, lady cop. Her friendship/partnership/relationship with Jay wasn’t bad, either.

But let’s be honest. We (at least me) can’t help but think about what Chicago would’ve been like if Erin was still around. I’m sure all of you have already thought this through and then some — I’m aware that I’m three years late. But just humor me, will you? Imagine the possibilities in story (again, if you haven’t already).

Erin would have never left Chicago in the first place

Fairly obvious one to start with but still. If Erin were to leave Chicago, it’d only be temporary, for story. We know that she wouldn’t be able to stay away from Jay and from Hank Voight and from Intelligence.

Jay would have never been married to Abby

So I admit, the “storyline” of Jay being married made for good drama. However, it was way too random at the time — clearly just another curveball to throw at Linstead so that they conveniently break up in time for when Erin had to leave Chicago. As if Erin’s own shit and Jay not knowing how to deal with his weren’t enough. But before any of this marriage bullshit came to light, they never let their own heads get in the way of their hearts, and if Erin had stayed, they weren’t going to start then. With that said, even if they had kept this in, no doubt that they’d recover from it. Thank u, next.

With Erin and Antonio Dawson both gone, Jay became the second lead character next to Hank, which meant that his arc became front and center. No doubt did we start to see more of his transformation sans Erin, but I’d like to think that we would’ve gradually seen it, anyway, if Erin was still around — “gradually” being the key term here. In fact, Jay was already doing some growing up in season four … they just decided to delete it for story’s sake:

🚨DELETED #LINSTEAD SCENE🚨
Jay confronts his past and confides in Lindsay. #ChicagoPD pic.twitter.com/4Szja3HOQU

Jay himself said it when he was thinking about proposing to Erin: “[Erin] has been there for me every step of the way”. We may not have seen it on screen much, but we also knew that Erin and Jay had an unspoken understanding of each other, too. I’d like to think that they would’ve shown their emotional connection even more so than they already have, and Jay opening up to Erin even more so than he already has, had she stuck around.

We would have had #LinsteadWedding

It wouldn’t matter if you shipped Linstead or not. It also wouldn’t matter that Hailey Upton is in the picture (sincerely, no offense meant). If Sophia had just stayed, there’s no doubt in anyone’s mind that Linstead would’ve been endgame. Hailey would have just been paired off with someone else, say, Kevin Atwater, and I’m not the only one who thought of this, either — Tracy Spiridakos and LaRoyce Hawkins’ off-screen friendship seems to be much more fun and miles better than their on-screen one (which is non-existent). And even If Jay and Hailey were to have gotten together with Erin around, it would have been just another Upzek, aka, temporary. But I digress. Again, I’m not trying to start shit — the point of this section is that Linstead would have been endgame if Sophia had stayed on the show. Okay? Don’t get your panties in a bunch, girls — peace and love!

We would have seen more of #LinsteadApartment

Hell, yes, I said it. I wanted more Skinstead. I could count the number of Skinstead scenes in one hand — disappointing in comparison to the other Chicago couples. I even read that we were supposed to get more Skinstead — well? But, hey, I’m counting my blessings. At least we got Skinstead. Imagine if we didn’t. Actually, don’t imagine it. Anyway, I’m going to end this section on a high note — drown in feels with me and relive the very first Skinstead scene (that we actually saw, I’m convinced that they got it on in that sex club):

Linstead would have gone on double dates

If the three Chicago shows are as connected as the Marvel Cinematic Universe, then it’s not too much to ask for inter-universal double dates once in a while, right? I would’ve loved to have seen a Linstead double date with Burzek, or Brettonio … especially, of course, Manstead. It’s almost illegal that they never got to hang out together.

Linstead would have been foster parents

Now, I don’t know if Jay wants to have kids, but it’s not as if he ever said that he was opposed to having them, either … not aloud, at least. The first and only time I’ve heard him talk about having children was when Terry’s wife asked if he had any. Erin, on the other hand, was clearly a natural with kids. Also clearly, she wanted to be what Hank was to her — a foster mom, a guardian — whether to a victim, or a kid in trouble … Nadia, a primary example (god, I miss Nadia, too). I’m sure that Jay would have had a hand in his girl’s life aspirations coming to light.

The boys had been doing most of the grunt work in the field during Sophia’s last couple of years on Chicago P.D.. Sophia’s top shot out of everyone in the cast (don’t let Jesse hear me say that) — it’s almost insulting to her real-life talent that we barely got to see Erin hold a gun.

Erin would have been Hank’s successor

Right from the pilot episode, it was obvious that Erin was following in Hank’s footsteps, and that Hank was molding Erin into his protégé. Antonio made it clear many a times that he wasn’t interested in taking over Intelligence, and Erin was clearly next in line (probably if you don’t count Alvin Olinsky, rest in peace). We’ve seen Erin take point on cases enough times to know that she knows her shit and she’s more than qualified. I would have loved to have seen “Sergeant Erin Lindsay” at some point.

Erin would have probably gone to jail, or lose her star

Whether we like it or not, Erin was an accessory to Kevin Bingham’s murder, which meant that there would have been a chance of her getting incarcerated and/or losing her police badge. As much as I wouldn’t have wanted that for her, it would have made for interesting TV watching, no?

Now this, I would have loved to have seen. You don’t know how many times I’ve wanted Erin to just drop Bunny — okay, maybe you do — but for some ungodly reason, she just couldn’t, and in the end, she sacrifices the amazing life she had established for herself just to keep her mother out of trouble. I know that Sophia leaving had a lot to do with Erin’s terrible decision-making, but the only peace that I get out of this is knowing that things could’ve been different if Sophia hadn’t left. The bitch (Bunny, of course) deserves to be in jail, or worse. Too bad Hank wouldn’t clip her, too. (Yeah, I said it. I’m not sorry.)

Hank would have actually been her father

They played around with the possibility of Hank being Erin’s father once — they probably would have flirted with the idea more if Sophia were still around. As much as it disgusts me and as much as I would have felt sorry for Camille, it would actually make sense, given that Hank and Bunny knew each other long before Erin was born and they allegedly spent a night together. Just imagine what a fairy tale ending that would’ve been: her foster father, who she considered her “real” dad, was actually her biological one. I’m already crying.

Coming up with this list was my way of paying homage to the character who made me fall in love with Chicago P.D., so, Sophia … this is my love letter to you. As much as I would have loved to have seen what I listed above, I’m grateful for everything I got out of the 84 episodes that you were in. And to whoever decided to pair Erin/Sophia up with Jay/Jesse — you’re a genius. Thanks to you, Linstead will forever be in my heart.

Did I miss anything? Whether or not, just @ me — let’s talk Erin Lindsay/Linstead.