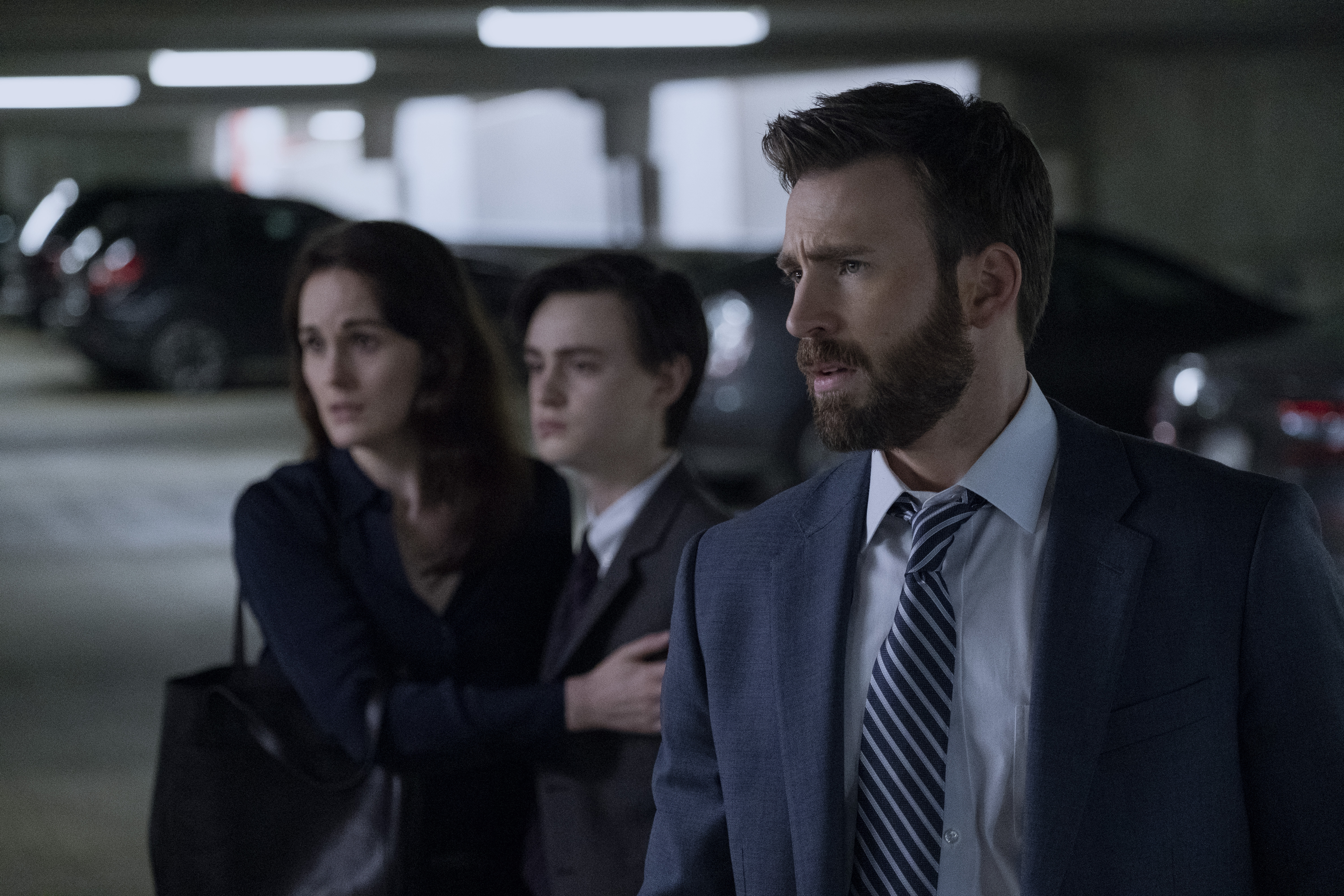 DID YOU CATCH IT?

Stop. Go back and rewatch the very beginning of the pilot episode of Defending Jacob. The opening moments. Between the opening titles and before we join the back of Chris Evans’s head as he walks into the Courthouse. Did you catch it? The entire series opened with the aftermath of the car crash from the finale. Water dripping on broken glass, spots of blood, a shadowed figure, and labored breathing. I noticed it the moment I first saw it, as I suspect most who read the book did. However, it was such an artistically framed shot that it almost blended in with the gorgeous opening titles. The pain scale was a little more noticeable. The pain scale that appeared behind Laurie in the hospital in her final scene was also there at the beginning. To someone with no frame of reference, it was likely overlooked and quickly forgotten. A brilliant opening and subtle nod at what was to come. 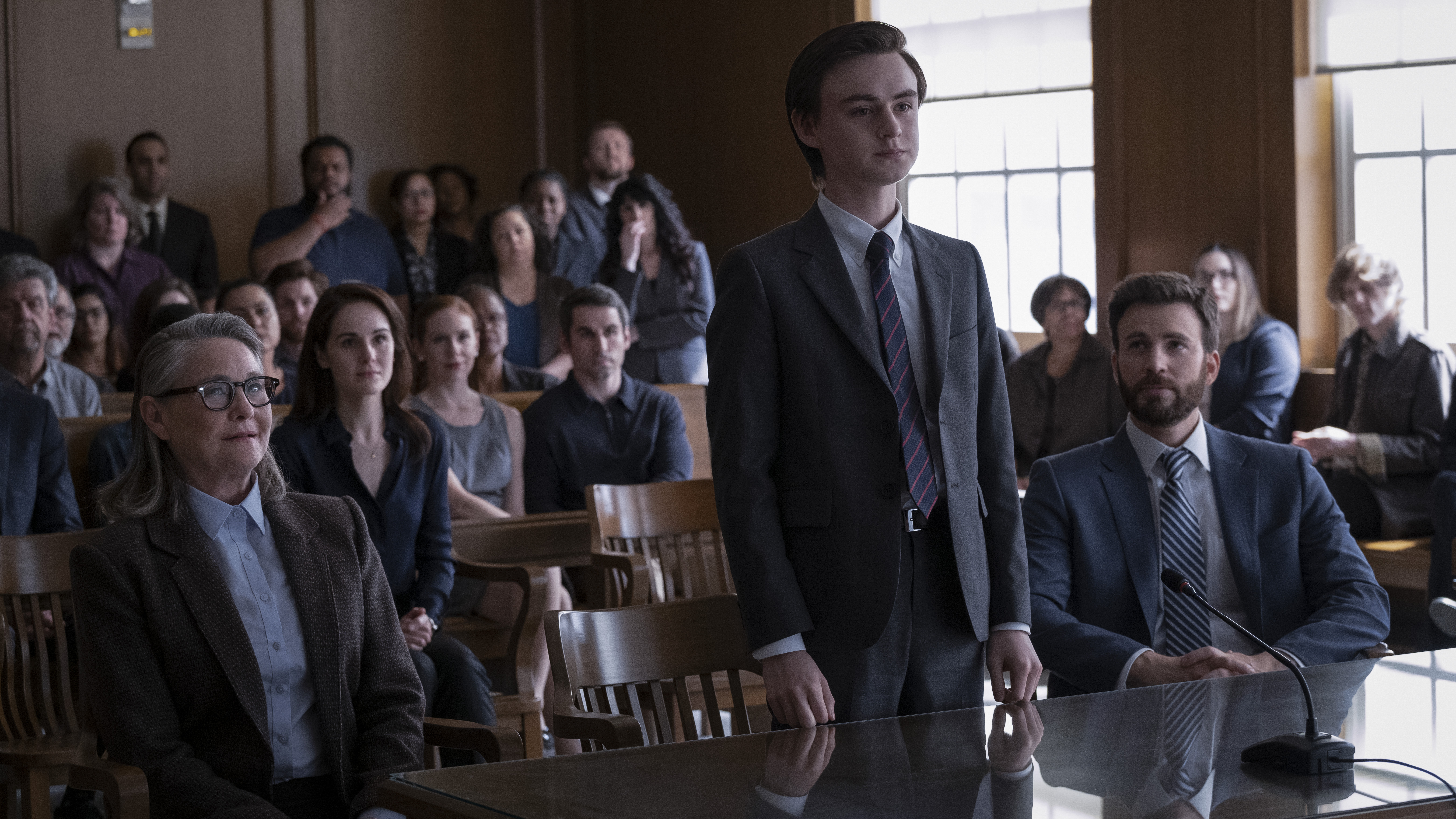 A Weight is Lifted

With Patz’s confession and suicide, Jacob (Jaeden Martell) was declared a free man. The Barbers enjoyed their newfound freedom and planned for the future, knowing they didn’t want to stay in the town that had persecuted them. This family that had been drowning in tension and stress for weeks had a brief respite where they could smile and laugh and enjoy themselves. They went out to dinner and they planned for their holiday in Mexico. The happiness was brief. The weight came crashing back down on Andy (Chris Evans, Avengers: Endgame) when it dawned on him that Patz’s confession and suicide were false. And that Billy was involved. 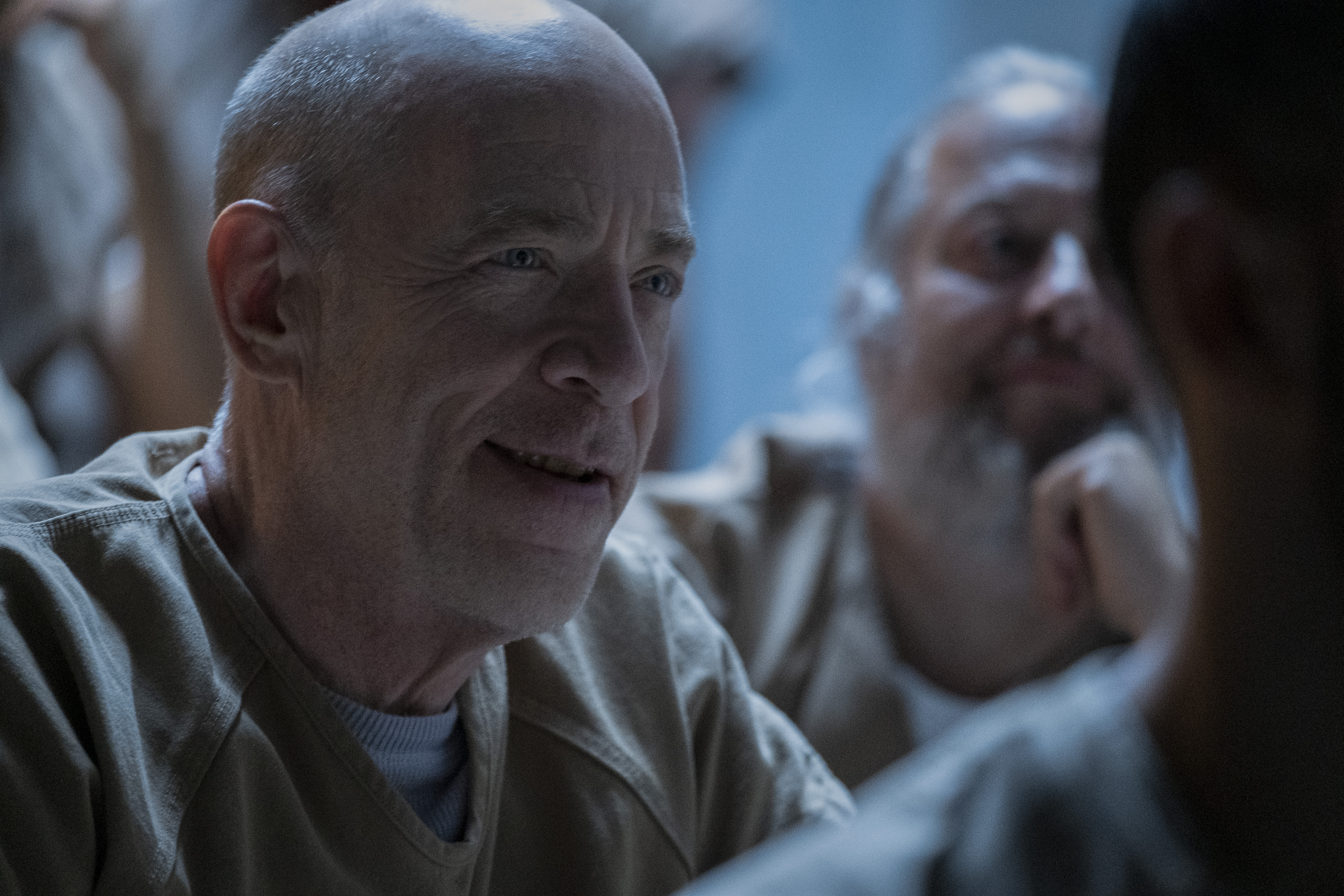 After learning that there was an investigation into Patz’s suicide, Andy thought the worst, and then confirmed it. He confronted his father in a painful conversation at the prison. Billy (J.K. Simmons, Spiderman: Far From Home) adamantly refused to acknowledge that he even knew what Andy was talking about, but made it pretty clear that he did exactly what Andy feared. At Billy’s behest Father O’Leary had forced Leonard Patz to write a false confession, and then strangled him and staged a suicide. Andy’s horror at having his worst fear confirmed was only made worse when Billy expressed zero remorse at a “one less animal in the world” whether he was guilty or not. Billy quite rightly predicted that he’d never see Andy again before Andy dropped the phone and turned his back to walk away.

Andy and the Bottle

Andy has shown an affinity for beer throughout the series. No judgments from me regarding having a drink with a friend or with a meal. Many adults drink alcohol everyday without consequence. However, using alcohol to drown out thoughts, regrets, or fears is a different story. Once Andy learned the horrifying truth from his father, there were very few scenes where he didn’t have a drink in his hand.

While harboring the secret that his father had a man killed in order to protect Jacob, Andy took solace in his friend alcohol. Stunned and reeling in his backyard, he had a beer while waiting for Laurie (Michelle Dockery) and Jacob to come home. On the beach with Laurie, she pointed out how many he’d had by noon as he went to get another. He happily shared a few bottles with Laurie to celebrate New Year’s Eve. He never lost control. Then Hope went missing.

Burdened by the knowledge of Patz’s death and that his false confession meant Jacob may be guilty after all, learning Hope went missing was the tipping point. Andy dove head-first into a very large bottle. When Laurie found him outside in the middle of the night, with a large empty bottle by his feet, his tearful confession of what he knew finally spilled out.

That sad, slurred confession was heartbreaking. Chris Evans’ portrayal of a weepy, sad, broken inebriated man was breathtakingly realistic. He didn’t overact, over reach, or go for overdramatic. When he asked “do you want me to tell the police?” in a wavering voice, his slightly slurred delivery was perfect. You felt his fear, sadness, and guilt all in one sentence.

After visiting Jacob and Laurie at the hospital, he returned to his empty half-packed home and had dinner alone with a drink before retiring to Jacob’s room to drink alone on Jacob’s bed. A sad parallel to a scene from the pilot where he sat in the same spot before happily getting Jacob out of bed with a little help from AC/DC.

Laurie Made a Choice

Laurie had been unraveling since the day Jacob was accused of murder. Her memory of his attempted violence as a child caused her guilt over what she could have done to prevent the present. Her fear that her son was capable of murder became clearer each day. Even in the brief window of time where she still believed in Patz’s confession, she visibly struggled to relax and enjoy Jacob’s freedom during a family dinner. 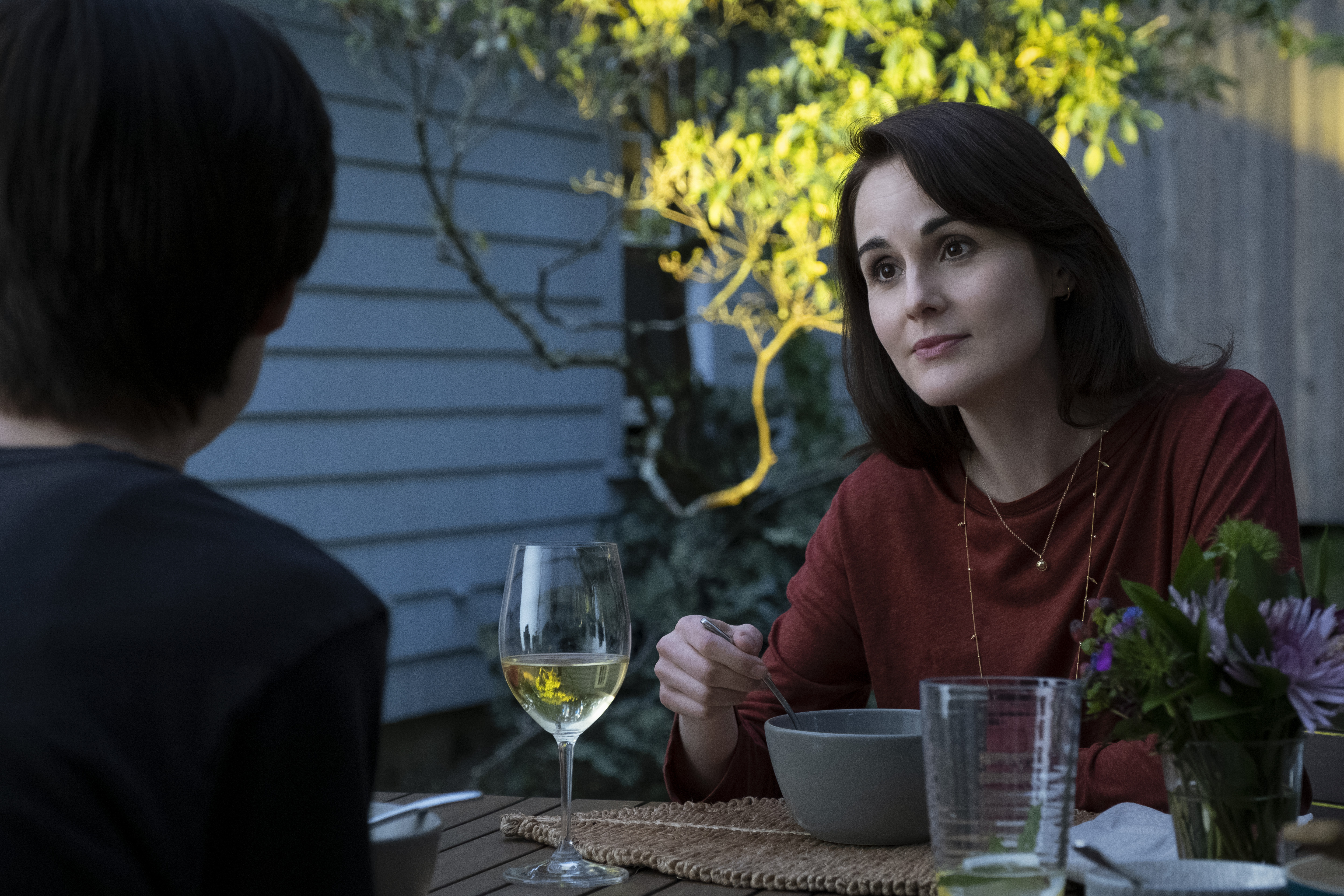 When she learned the truth about the false confession, her fear and panic were palpable. After all the focus on whether or not Andy and Jacob had the murder gene or a propensity for violence, it turned out Laurie was the family member with the capacity for murder. Knowing she would never know the truth, that she would never be able to believe what Jacob said, is what drove Laurie to take drastic action. She was not equipped to cope with that knowledge.

Andy spent the entire series lying to Laurie or withholding information to protect her. Lying about his past. Lying about his conversations with his father. Lying about about the website he knew Jacob frequented. Their ending, while sad and heartbreaking, was fitting. At the grand jury hearing he lied for Laurie. He knew that the crash was not an accident. Their conversation the night before, talking about how she looked at Jacob now, offering her time alone away from them if she needed it, he knew she was struggling. Finding Jacob’s baby book in the trash and calling Laurie’s phone multiple times made it clear that he suspected something was terribly wrong. And he was right.

Andy Barber has suffered too much. For a man that spent his life keeping one massive secret, the weight of all he carries alone now is too much. His son murdered a classmate. His father had someone murdered to protect his son. His wife attempted to murder their son. It’s too much. It’s too sad. Those secrets are too big a burden to carry on his own. Someone needs to give Andy hug.

Neal Loguidice (Pablo Schreiber) spent so much time trying to prove a 14-year-old murdered someone, only to have another person confess. Setting aside whether or not Jacob was actually guilty, as Neal didn’t have the knowledge about the false confession from Patz, Neal functioned in the finale as someone who recognized that he screwed up and was trying to make amends. He had used sneaky tricks and questionable tactics to make his case against Jacob, only to find out he had rushed to judgment against a child. He filed to drop the charges against Jacob before the defense ever got a chance to when he learned about the confession. It’s worth noting that despite Neal’s behavior, Andy didn’t hold it against him. As Andy collected his belongings and turned down and invitation to return to his job, he suggested his boss keep working with Neal, as Neal was good at his job and probably learned a lesson from the experience.

As we finally learned the purpose of the grand jury hearing, Neal made it clear his goal was now to find justice for Jacob, the child he once sought to imprison. I’m still not clear on why Neal seemed to carry such hatred towards Andy during Jacob’s trial, if something happened in their shared past to cause a rift with his mentor, but he eased up on the outright malice as the grand jury hearing drew to a close.

It’s all in the Eyes

Throughout the series I have praised Chris Evans’ ability to communicate without words. He conveys his thoughts and emotions through expressions, raised eyebrows, the tilt of his head, and anguish in his eyes. It’s fascinating to watch. In the final episode of Defending Jacob, Michelle Dockery showed off the same skill. The unspoken conversations Andy and Laurie shared through looks and gestures showed their reconnection after the trauma of the trial. When Laurie learned the truth and her belief in Jacob’s guilt came rushing back, you could see the conflict and terror in her eyes every time she looked at Jacob.

The question of Jacob’s guilt is one that is never definitively answered in Defending Jacob. It’s also a question that was rarely asked of him point blank throughout the series. When his parents visited him in jail in the pilot he said he didn’t do it and they immediately said they believed him. It wasn’t until Andy heard Jacob’s gruesome story in court that he felt the need to confront him and ask again. In the car, before the crash, Laurie realized that she never asked him. Jacob maintained his innocence, insisting he did not kill Ben, except for one time. In his panic while trying to get Laurie to slow down the car Jacob blurted out that he did kill Ben. When Laurie questioned him, he took it back and said he’d tell her whatever she wanted to hear to get her to stop the car.

Laurie believed he did it. She also knew she could never believe him, no matter what he said. Andy believed he did it. Despite his verbal insistence of Jacob’s innocence, his disbelief and doubt were written all over his face. In the previous episode both Laurie and Andy vehemently stated that they would love him, even if he was guilty. Their interpretations of how that love would translate were very different. Andy tried to bury the knowledge and fear of what his son was capable of by focusing on packing up their home to start over. Laurie was incapable of putting her fears aside, instead she was driven by them to cause the crash.

What do You Think?

I’m not going to spend time picking apart the differences between how the series and the book ended. I do think the changes added a little more suspense and ambiguity to Jacob’s guilt or innocence. What do you think? Did Jacob do it? Which twist surprised you the most? Did you suspect Andy would take drastic steps instead of Laurie? Do you think Jacob will wake up from his coma? Do you think Laurie really doesn’t remember the day of the crash? How will Andy recover? Do you have any other lingering questions about Defending Jacob that didn’t get answered? Visit us in the comments or on twitter to let us know.