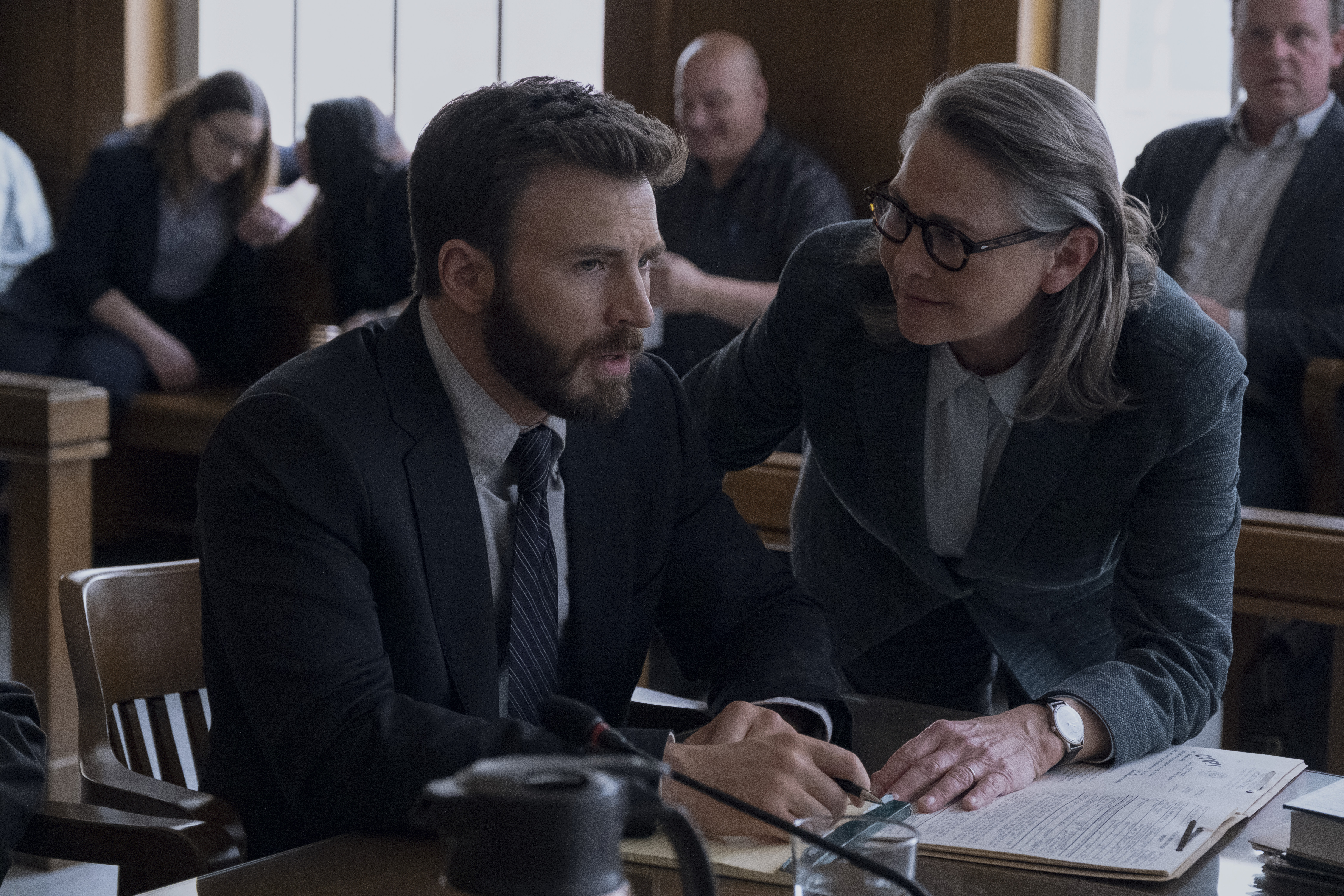 In the penultimate episode of Defending Jacob, Andy and Laurie Barber finally verbalized their doubts about Jacob’s innocence.

As we Approach the endgame

I read the book this limited series is based on a few years ago. “Defending Jacob” by William Landay is a gripping, suspenseful tale that holds onto the reader and doesn’t let go. So far, this series has lived up to the source material. Because I read the book, I know where this is all headed. I have recognized some necessary changes from the book, but I don’t know how much they altered the ending of the narrative. The producers have stated that reading the book will not spoil the ultimate plot of the series. In any case, my prior knowledge of the original ending will limit my speculation about the final episode. I don’t like to spoil stories.

Considering their contentious relationship since the pilot, learning that Andy Barber (Chris Evans, Avengers: Endgame) was once a helpful mentor to an eager Neal Loguidice (Pablo Schreiber) was an interesting place to open the episode. Andy offered him tips to become a more compelling prosecutor. Tips that we later witnessed Neal use against the Barbers at Jacob’s trial.

Neal has been competitive with Andy since the investigation into Ben Rifkin’s murder began. He’s been angry and vindictive at several points along the way. It makes one wonder if something personal happened between them at some point after Andy’s original mentorship, or if Neal is simply an adult who acts like a petulant child when things don’t go his way. 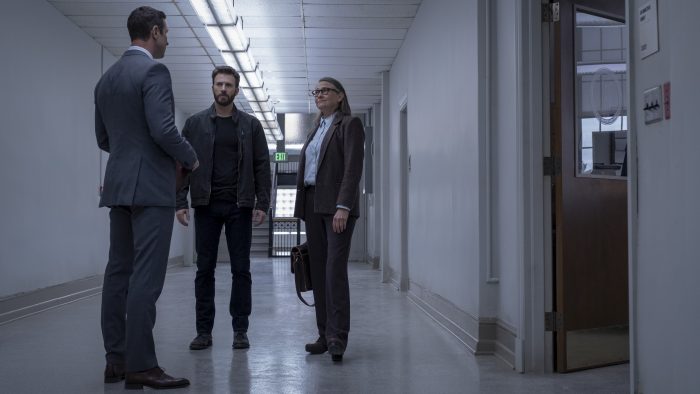 We learned this week that Neal baiting Andy into assaulting him last week was a calculated move to get a witness to admit they’d seen Andy commit violence in the past. The fact that the gambit also led to Detective Duffy (Betty Gabriel) mentioning why Andy was provoked — Neal taunting him about his father being in prison for murder — was a bonus for Neal. Because no matter what the Judge instructed the jury to disregard, they will remember the fact that the accused murderer’s grandfather is in prison for murder.

Neal has been openly condescending to Andy in the grand jury hearing as well. Andy, though defeated and visibly broken in these scenes, has repeatedly corrected Neal’s form on how to pose questions throughout the hearing. These moments offer evidence that though something traumatic has happened to Andy since Jacob’s trial, he’s still the same intelligent, quick-thinking former Assistant District Attorney.

This week we learned the identity of the mystery man in the blue Lincoln. Duffy confronted and questioned the man after Andy spotted him outside the Courthouse. He is James O’Leary, an old gangster known as Father O’Leary. He has a record and now hires himself out to do small jobs roughing people up. Both Andy and Laurie were rightfully disturbed by the news that former gangster muscle had been following them. The question remains, why was he following the Barbers?

A MOMENT OF LEVITY

In the midst of the trial, Joanna Klein (Cherry Jones) had dinner with the Barber family and entertained them with a story. Jacob (Jaeden Martell) laughed and the Barbers all took a moment to breathe. Then, Andy’s phone rang. William Barber called to check in on Jacob’s trial and chances, concerned over what he had been seeing on the news. For the first time, we saw a little fear from manipulative Billy Barber. Through a typical contentious phone call between the Barber men, and angry Billy warned Andy that prison was not the place for Jacob. Of course, Andy lied to Laurie about who was on the phone before they traded comments about optimism for Jacob’s chances.

Neal repeatedly took questionable measures to get information in front of the jury. Even though he was called out on it and the defense’s objections were sustained by the Judge, the information is still out there. The jury is aware that Jacob’s grandfather is in prison for murder. The jury is aware that Jacob owned a deadly looking knife. Even though it was made clear that the type of knife he owned was not proven to be the murder weapon, that in fact the chances of it being the actual knife were one in 500, the jurors were equipped with the knowledge that a 14-year-old owned and carried a deadly weapon. 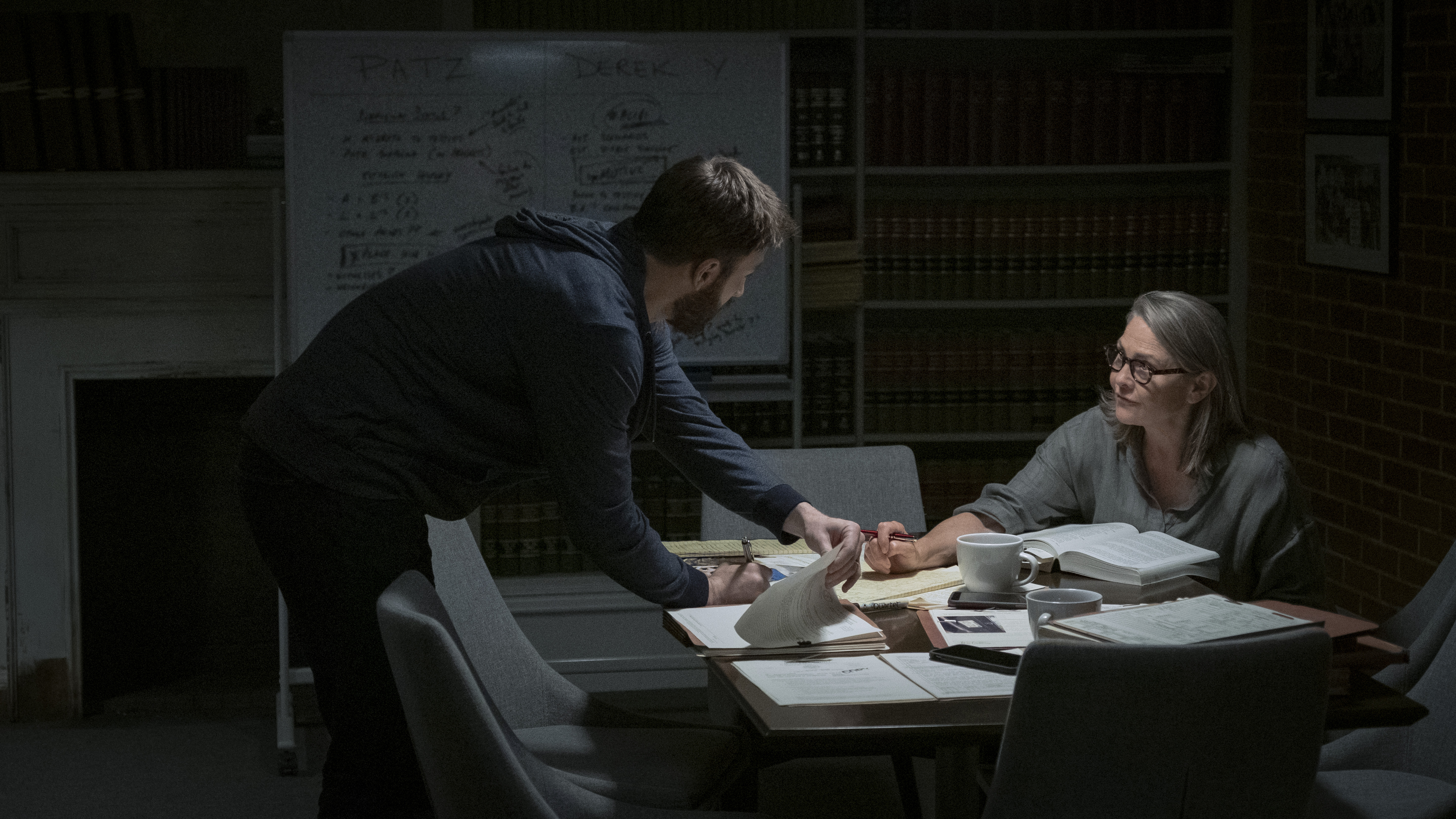 Oh Andy. Andy learned about Jacob’s fascination with cutter porn early in the investigation, but failed to do anything about it. He looked at the site briefly, and quickly dismissed it. Had he taken ANY steps to address his son’s fascination with the disturbing subject matter, they might not have been blindsided by Jacob’s story at trial. He could’ve confronted Jacob. He could’ve told Laurie. He could’ve told their lawyer. He should have done all three. But, had he done even one, it might have led to further investigation into the site where they might have discovered Jacob’s violent stories. Instead, they were forced to listen to a reading of the gruesome story in open court along with the jury and the Rifkins. 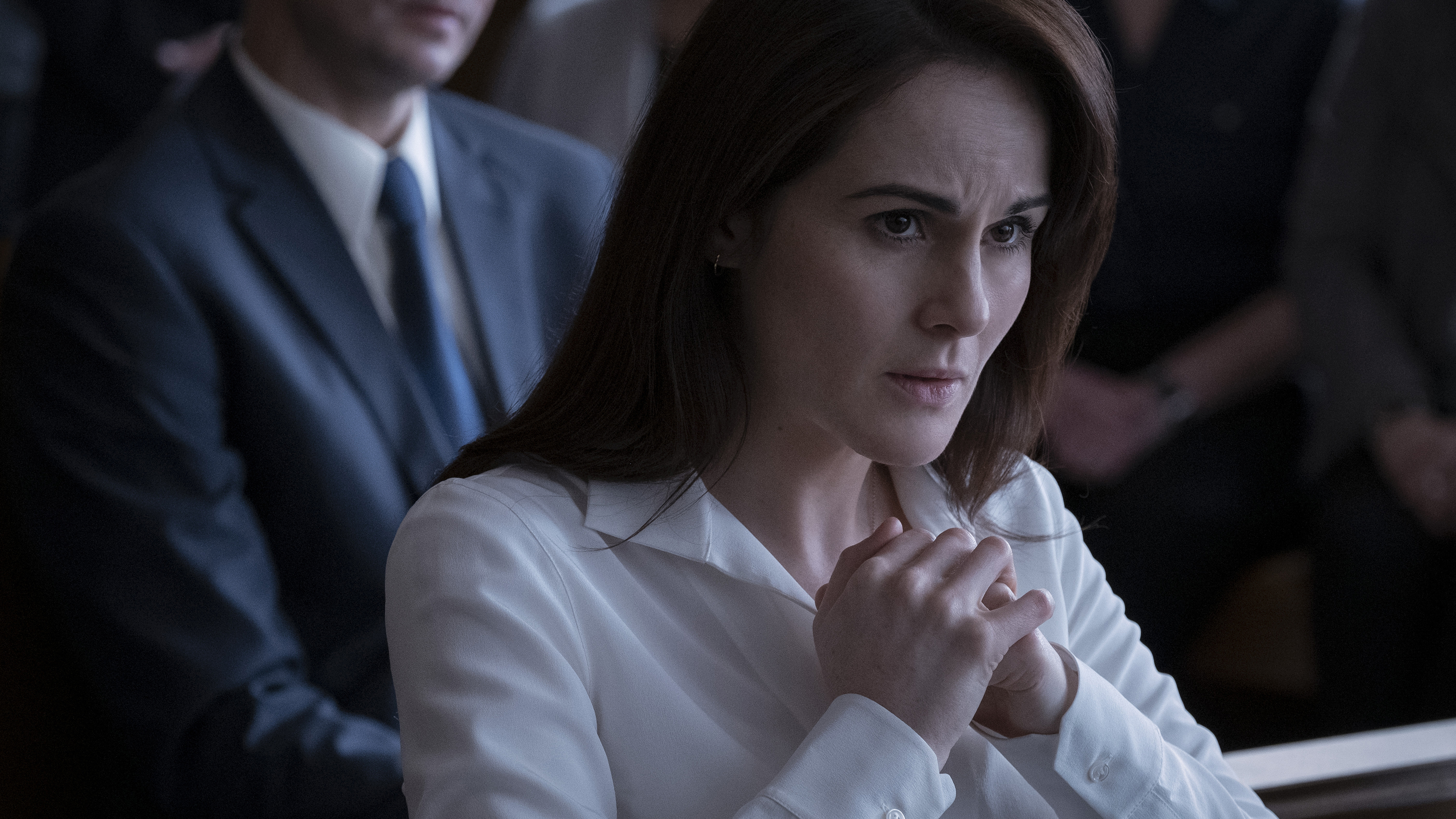 Oh Laurie. Laurie has suspected her son’s guilt for a long time. This episode we saw her slowly lose whatever hope she had left. As she struggled to get through each day of the trial only feet away from the grieving Rifkins, her distress became more and more palpable. As she listened to Jacob’s story detailing attacking a victim from behind, sound drained away until only the sound of a heartbeat was heard. Laurie again flashed back to that moment from Jacob’s childhood with the bowling ball. If his story convinced Jacob’s own mother of his guilt, how do you think the jury reacted?

Andy’s abject horror at listening to Jacob’s story read aloud in court was only a precursor to his paralyzing moment of incredulous doubt once the family was alone in the car. As Andy sat frozen, eyes closed, eyebrows drawn together, his terror was clear. His voice was tentative the first time he found the words to ask “Did you do it?” before he whipped around and bluntly begged Jacob to just tell him if he killed Ben. Jacob’s teary denial did not seem to assuage Andy’s doubts. Laurie remained silent and shocked throughout the exchange.

Jacob reconnected with Sarah this episode and happily chatted with her in the evenings after trial. It was a visible contrast to the nervousness he displayed throughout the courtroom scenes. Often bouncing his leg or wringing his hands, he made a valiant effort to maintain an outward expression of calm on his face. His stoic demeanor only began to crumble when the prosecution revealed they had discovered the story he’d written. When Andy asked him about it, he didn’t respond and couldn’t look him in the face. He only admitted he had written the story, with an almost imperceptible nod to Joanna, after she confirmed they traced the story to his IP address. As the story was read aloud, a single tear slowly fell from his face.

Laurie and Andy finally had a fully formed argument that was a long time coming. Andy finding the words to confront Jacob in the car opened the floodgates between the struggling couple. He admitted to keeping Jacob’s cutter porn fascination from her because he knew she already suspected Jacob was guilty. She admitted all doubt was gone. She knows he did it. She is certain. She believes his story was a confession. Andy believes it was a fantasy. Andy professed doubt about Jacob’s guilt, arguing that deception is difficult to maintain for such a long time. Laurie blamed Andy for setting a fine example of prolonged deception. Then, also admitted the blame was hers to share. They each agreed that even if he’s guilty, they still love him, but disagree about his guilt.  The scene ended on this highly depressing note about the Barber family:

Andy: “What do you want me to say, Laurie? You’re right. Our marriage is a lie. Our whole fucking family is based on a fairy tale, built on nothing. And our son’s a murderer. Is that what you want to hear?”
Laurie: “No. But that doesn’t mean it isn’t true.”

The limited grand jury scenes continued to provide the framework for the narrative following Jacob’s trial, but did not reveal too much in this episode. They solely served an opportunity for Andy to confirm that none of them were prepared to hear Jacob’s story. 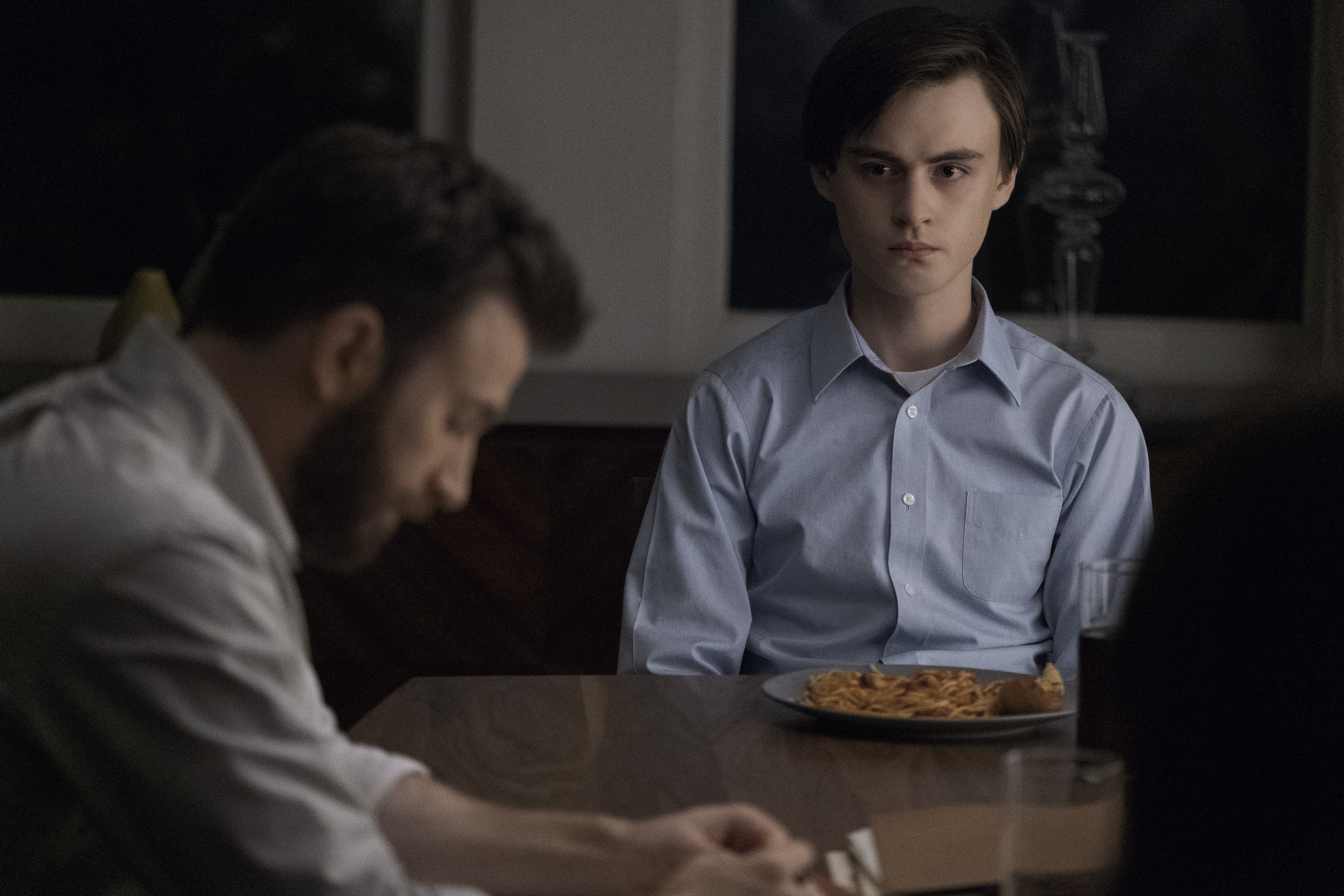 Due to the debacle of Jacob’s story, Andy declared that they needed to go after Derek again, and also call Sarah to the stand to show his obsession with her. Jacob protested involving Sarah, put Andy made it clear that he lost any say in the trial after his story came out. When Jacob tried to contact Sarah to presumably warn her, she ignored his call. She was reading his story while simultaneously receiving endless notifications from classmates discussing his guilt.

After Matt McGrath abruptly fled town before testifying, Joanna agreed to treat Leonard Patz as a hostile witness and hope for the best. In the closing moments of the episode, we witnessed Patz pen a confession on the back of his subpoena to testify. As sweat dripped down his whimpering, distraught face, Patz wrote a note of apology to the Rifkins.  The camera zoomed in on the closing words “I killed Ben” before fading to black. 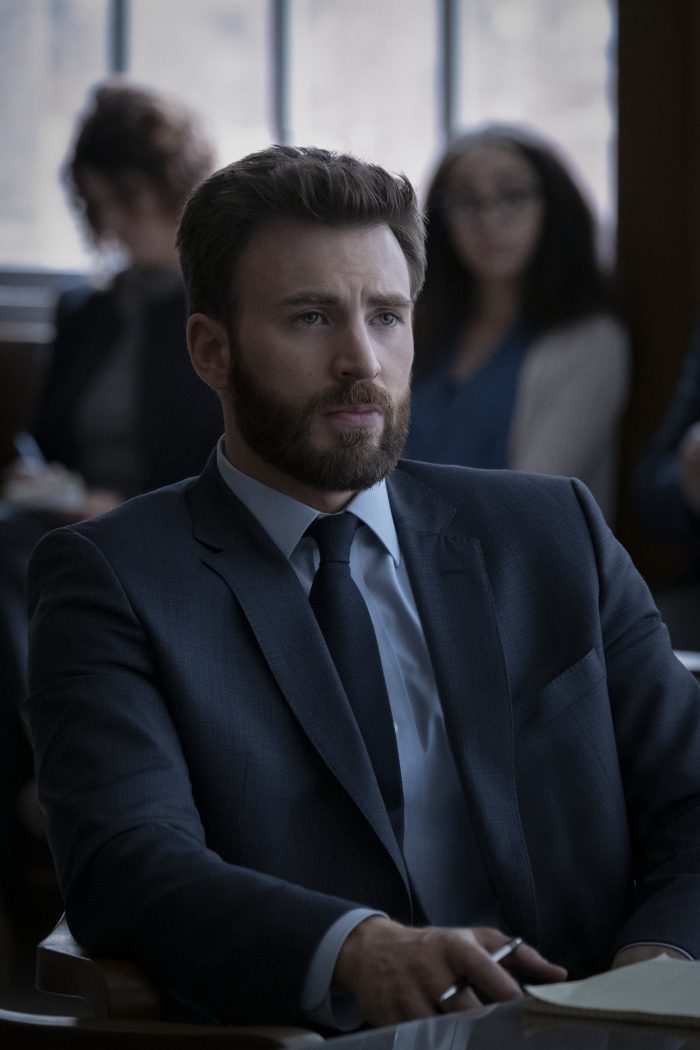 I have followed Chris Evans’ career since I was an intern on his first big movie back in 2001. He has come a long way in the past nineteen years, creating an impressive mix of characters across many film genres. The role of Andy Barber is easily one of the best of his career. Complex, intense, and morally ambiguous, Andy Barber is giving Evans an opportunity to show off his skills. I keep coming back to the phrase ‘quiet intensity’ to describe him in this role. His eyes and subtle expressions hint at what’s teeming beneath the surface of this deep, determined character. Chatter regarding the Emmy awards is just starting to begin, and Evans is very deservedly part of the conversation.

Defending Jacob wraps up when episode eight airs next Friday, May 29th on Apple TV+. If you want to talk about Defending Jacob, have theories on how it all ends, or have a lingering question that I missed, visit us in the comments or on twitter to let us know.