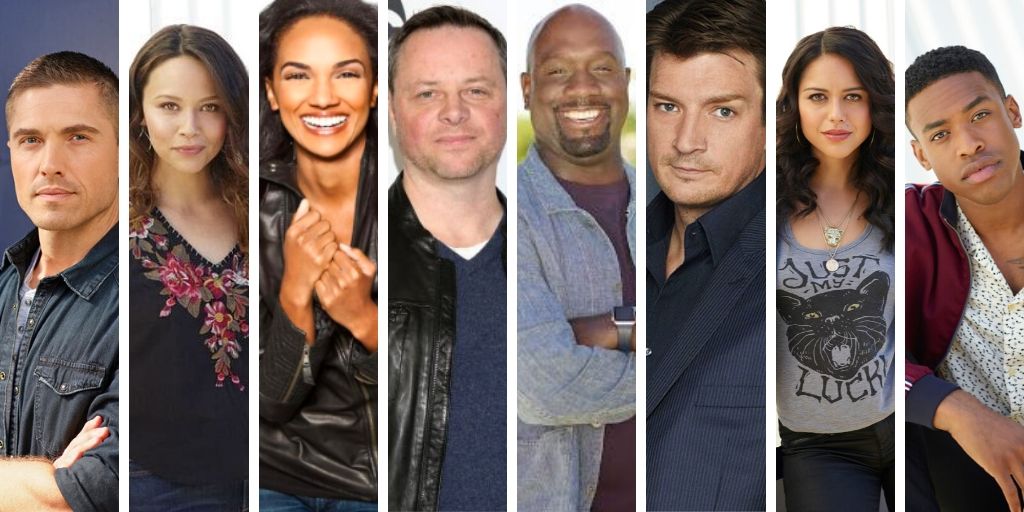 We seriously felt like we were waiting for this panel all day. And it was so worth it. We even got all of the main cast to join in and we felt so lucky! Things at HomeCon 2.0 have been amazing on the first day and they really finished off with a bang with The Rookie! So keep reading for a few highlights from the panel!

We all know the second season finale was a rough one. We are left worrying about Jackson and even more about John. Things are looking a bit difficult for a few of our favorites. When the topic of just how much trouble John may be in and how he must have been feeling at the end, Nathan had us laughing with his response.

Nathan: “Yeah, oh yeah. Yeah. Right? It’s like oh my god this is the worst-case scenario. Oh my god, this is even worse. Oh my god, the cops are outside.”

But when it comes to Nathan’s character, we’re sure he is not laughing at what’s going on right now. But we are hoping that the other characters on the show know John well enough at this point that they know he is not a dirty cop in the slightest. Richard T. Jones actually had an interesting response when it came to John.

Richard: “You know, I think Grey knows that Nathan’s character is better than that. So it kind of threw him. Grey really had to get back and say Nolan don’t talk to me right now because I put you on a pedestal and you broke my heart at that moment.”

It was great to see Angela taking her place as a lead on things and we can’t wait to see where she goes from here. And Alyssa Diaz seemed to feel the same way about Angela and what she has wanted since the beginning.

Alyssa: “From the beginning that’s been her goal. To kind of take that on and build that relationship also with Grey. That was really nice, the different layers.”

But Angela wasn’t the only one that was going through some changes as Mekia Cox’s character, Nyla, really opened up and came into her own in her first season on The Rookie. Toward the end of the season, we really began to get an inside look into Harper’s life and what was going on with her. And as Nyla has gone through changes and dealt with the custody of her child on the show, Mekia has been going through changes of her own.

Mekia: “It’s interesting that I got this character as I’ve become a mom. It’s informed what I do as an actress. I felt what she would feel and it was a really happy moment for me and a fun moment for my character. I’m curious to see where that goes going forward.”

Things have changed a lot for the characters this season, especially when it comes to their relationships. Tim has embarked on a new relationship with Rachel that quickly became a long-term relationship that they are going to try to keep going. We don’t know how it will work going into the next season but show creator, Alexi Hawley gave an incredible response.

Alexi: “For Tim to invest and actually be open in a relationship after what’s happened to him is a big deal. I think he’s still tentative there in the same way that Lucy is tentative with Emmett.”

We definitely don’t know where things are going with Lucy and Emmett, but they seemed to leave off in a good place. Only time will tell and, really, it’s just further confirmation that we need a third season. And a fourth. Definitely a fifth. Basically, The Rookie needs to just continue forever.

Seeing this cast unite over Zoom proved something that we figured to already be true. This cast obviously has a lot of love for one another. Which means they have a lot of fun with each other. Something made evident when they began talking about the difficulty of the season one wardrobe. Specifically, the pants and their tendency to rip.

Melissa: “Eric is shaking his head because he knows I’m going to tell it. When he was going after the ATM, he ripped his pants!”

Eric: “Yep. First day back to work on the pilot episode. Ripped them right down the thigh.”

We were cracking up with all of their stories. But when they were asked who they would bring on to join their squad from another cop series, we loved their answers. We especially loved Titus’s answer and how quick he was with it.

We certainly couldn’t disagree! Angela Bassett joining The Rookie, even for just an episode would be absolutely amazing! This was an absolutely incredible panel and a great way to end the day! Make sure to check out HomeCon on Twitch to join the live stream panels for free! Find and follow HomeCon on Twitter as well as Cape & Castle to keep up with all the latest info! Be sure to also check out HomeCon’s site for more info and our site for more articles on the convention, Disney, Marvel, Star Wars, and more!