‘Defending Jacob’ Review: Off To A Strong Start

Defending Jacob premiered on Apple TV+ with its first three episodes today. This limited series follows the aftermath of the gruesome murder of a 14-year-old boy in an affluent town. It is filled with subtle, powerful performances from a stellar cast.

This review will be filled with spoilers from the first three episodes. If you haven’t seen them yet, turn back now.

The narrative begins as former Assistant District Attorney Andy Barber (Chris Evans, Avengers: Endgame) is brought before a grand jury. The prosecutor explains that the job of the jury is to determine if there is enough evidence to grant an indictment. The scene is preceded by an impressive shot following the back of Andy’s head and shoulders as he walks through the courthouse. The audience is immediately thrust into Andy’s point of view and wondering what brought him here. The same follow shot is used repeatedly through the episode.

The grand jury proceeding is the frame to tell the story of what happened 10 months earlier. We return to the grand jury room a few times in each episode and the questions cause Andy to recall what happened. Andy is at turns flippant, defeated, and annoyed as he is questioned. He is broken. A contrast to the Andy of 10 months ago.

The first three episodes are laid out so that each member of the Barber family is the focus for one episode. The narrative shifts so we get a little more from each character’s point of view as the episodes progress. I don’t know if this will continue in further episodes, or if it was by design knowing that Apple TV+ tends to release the first three episodes of their series all at once. In any case, it’s an interesting way to join the Barbers’ world.

The first episode is all about Andy. As detailed above, we start with Andy at the grand jury before meeting the Andy of 10 months ago. Assistant District Attorney Andy Barber is our gateway into the tragedy as he is the man on the case. He visits the site of the murder of Ben Rifkin, a 14-year-old classmate of his son. Along with a police detective, Andy interviews Ben’s classmates, all of whom are unhelpful but very interested in the fact that he’s Jacob’s dad. He visits the home of the family in mourning. There are very few scenes in the pilot episode where Andy is not present, the narrative is told almost wholly from his point of view.

The pilot is a showcase for Chris Evans. He plays both husband and father, roles we haven’t seen him in before. As husband and father he is protective and caring. His prosecutor is determined, focused, and driven. As the episodes progress his fear and desperation become palpable, with something seething just below the surface. Is it rage or guilt? Or something else?

I am a fan of Chris Evans. He is my celebrity crush. I make no attempts to be coy about my affection for him and I’ve been eagerly anticipating the release of this show. Yet, there was a moment halfway through the pilot episode where I had a realization of “Oh shit, that’s Chris Evans.” He had disappeared so fully into Andy Barber — husband, father, and prosecutor — that I forgot I was watching my crush on screen. I am enthralled with the way he is able to convey complex emotions with the tilt of his head or the raise of an eyebrow. He is skilled and subtle. 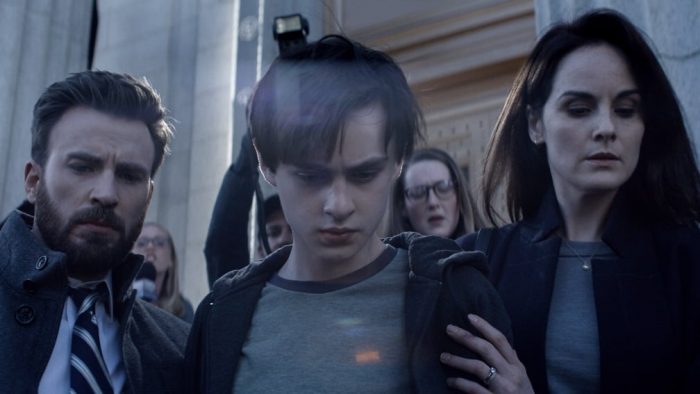 The pilot episode concluded with Andy discovering a knife hidden in Jacob’s room. The second episode rightly shifts focus to Jacob. After being confronted by his parents about the knife, he goes to school to face the whispers and suspicions of his classmates. A friend, Sarah, even clues him into the fact that accusations about him aren’t limited to online comments.

When Jacob’s fingerprint is found on the clothing of the deceased boy, Andy is taken off the case and told to find a lawyer for his son. As Andy races home frantically calling Laurie to meet him there, Jacob runs when he sees police waiting outside their house. Jacob is eventually found and brought in by police. His fear, confusion, and panic drive home just how young he is. A 14-year-old accused of murder.

Jaeden Martell’s performance is impressive. He takes Jacob from seemingly aloof and unaffected by the death of a classmate to fragile, timid, and scared. He is on the verge of tears or breakdown throughout the episode. When he is finally discovered by police sitting on a park swing, his blank stare and acceptance of his fate were haunting. His dissolving into tears asking for his father was heartbreaking.

In the third episode, Laurie Barber takes over the heavy lifting for the narrative. While Andy is familiar with the world of law and prosecution, she is not. She struggles to keep a poker face during Jacob’s arraignment. She barely contains her outrage when Andy reveals his family’s long-hidden history of violence. And it spills out as she reveals it to Jacob and their lawyer the following day.

Laurie is terrified, angry, and on edge the entire episode. She is horrified to discover their garage spray painted with “Murderer Rot in Hell”. She is dismissed by her job and shunned by her best friend. As she and Andy meet with a doctor to address the “murder gene” situation, she barely holds it together as they discuss Jacob’s tendency for violence as a young toddler. What she does not reveal to the doctor or Andy, but the audience is shown via flashback, is that she once stopped a young Jacob from hitting another toddler over the head with a bowling ball.

Michelle Dockery plays Laurie Barber beautifully. While Laurie remains a concerned mother, we see her doubts about Jacob bubble up in the third episode, even though she denies them. We see the trusting wife begin to question her husband and his motives. Laurie slowly, meticulously, unravels in the third episode as she takes hit after hit after hit. It’s restrained and impressive. 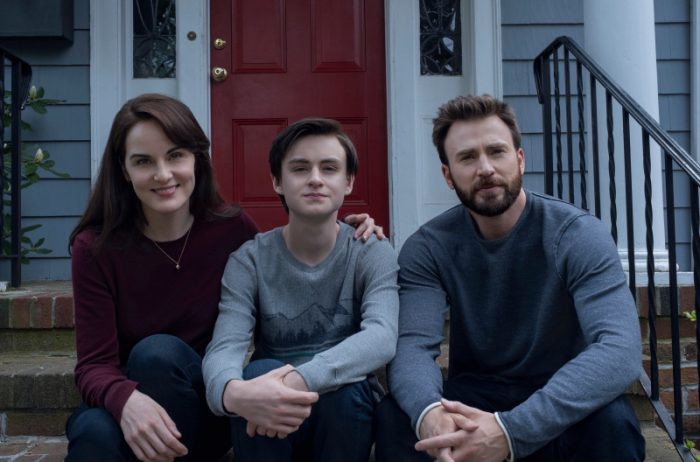 If the grand jury is present day, the rest of the series is technically a flashback. Yet, as the story unfolds flashbacks become very important to informing the characters. Andy frequently has nightmares or memory flashes of a knife-wielding man with a knife tattoo on his forearm. After the reveal that his father is in prison for stabbing a girl to death, it is reasonable to assume these flashes are memories of his father. By the third episode, those flashes become intercut with memories of him discovering the knife in Jacob’s room. While he may deny it, deep down he seems to have concerns that his son did, in fact, inherit murderous tendencies.

So far, Laurie’s memory reveals are limited to the bowling ball incident. And, unless I’m simply forgetting, we haven’t seen the memory flash plot device used for Jacob yet, but I suspect it’s coming. I also suspect the opening scene from the pilot — a shot of water dripping on glass, with what appears to be blood smears and the shadow of a person above it while shallow breathing is heard — will be explained, clarified, or called back to as the episodes progress.

Defending Jacob is a limited series adapted from the bestselling novel by William Landay. The five remaining episodes will be released once a week on Fridays for the next five weeks on Apple TV+.