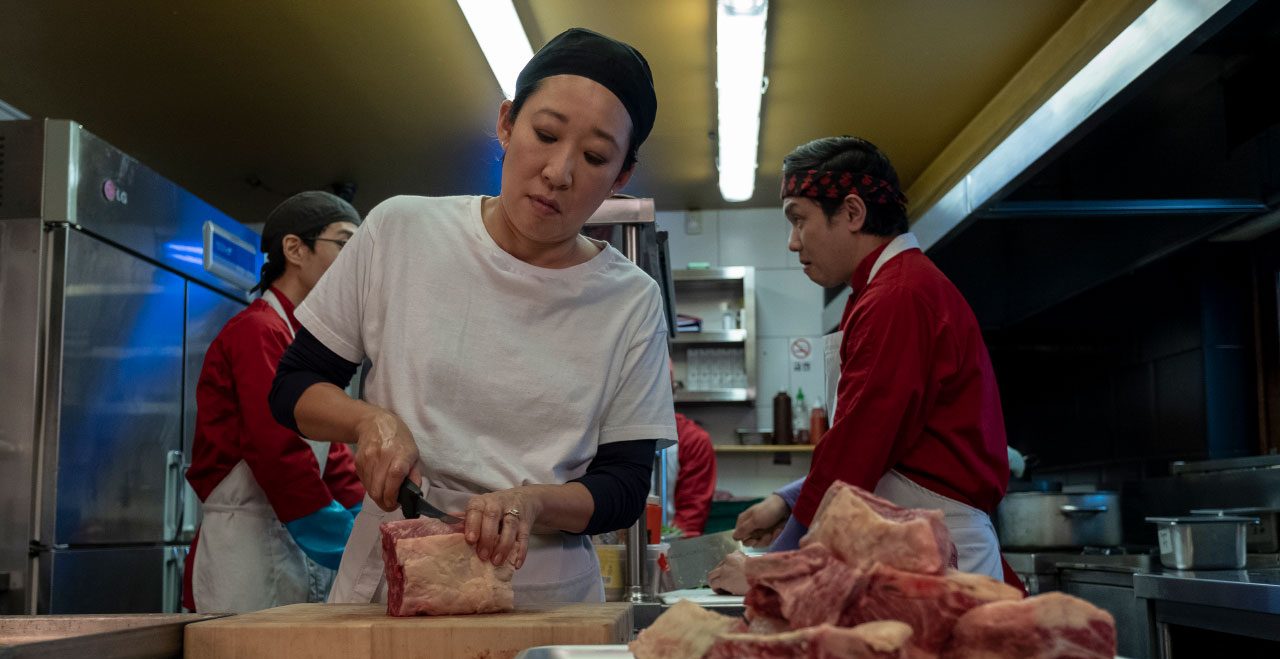 Killing Eve is back for a new season and it starts and finishes with a bang. The first episode “Slowly Slowly Catchy Monkey” fills us in on what Villanelle (Jodie Comer, The Last Duel) and Eve (Sandra Oh, ABC’s Grey’s Anatomy) have been up to since the events in Rome in the Season 2 finale, introduces a new character and teases further about The Twelve organization.

A slow but well-paced episode that sets exciting things for this third season. Here’s our full Killing Eve 3×01 Review:

The episode starts off with a flash-back in Russia where we are introduced to a new character, Dasha. A young gymnast, who gives off strong Villanelle vibes right off the bat, and rightly so as she turns out to be a ruthless murderer.

The next scene takes place at a wedding reception during the bride’s speech. Then stands up the other bride, Villanelle, fully dressed in black, who gives a speech with the emotional range of a shrimp until she mentions her ex, claiming she’s never been happier than since she is dead. So it would seem Villanelle has moved on from Eve. Yeah, I don’t believe that.

Later on, she crashes her own wedding by starting a fight with an older woman who is lurking in the corner. Together, they leave in the brides’ Just Married car.

It turns out the woman is Dasha and she’s the one who trained Villanelle and made her who she is now. They make a deal on her terms: Villanelle wants to become a Keeper. She then resumes her old job and goes to kill a new target, resorting to the same methods as Dasha in the flash-back. I need more about this relationship already! 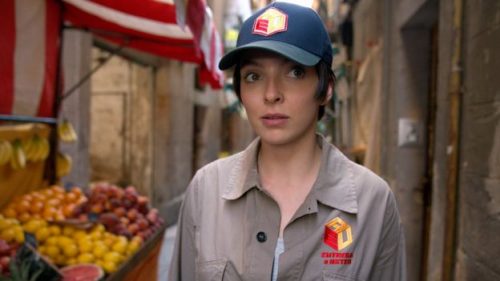 It takes a little while before we find out Eve is indeed well and alive. Although, I’m not sure “well” is the right word. Eve’s new life is drastically different and consists of a monotonous kitchen job paired with a questionable diet based on junk food and booze. Yeah, Eve is clearly bored and missing the thrill of her old life as an MI6 agent.

Also, it is safe to say her marriage is dead. 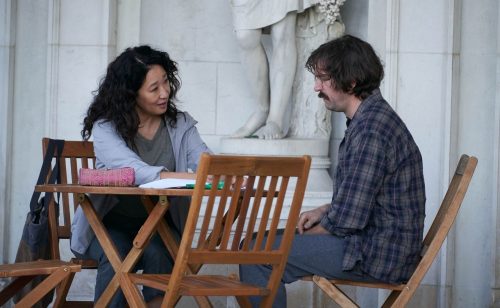 After texting a picture of a toilet paper roll (a joke that is funnier than was intended considering the current pandemic context), sweet Kenny (Sean Delaney), who has left his mother’s office to become a journalist, pays her a visit. Eve being Eve, slips out that she is so entirely, completely done with Villanelle when Kenny was actually asking about Niko. Oops.

Then Kenny mentions that he has been investigating The Twelve, the secret organization Villanelle was working for without knowing, but Eve quickly ends this conversation because she is over all of this.

So to summarize, both Eve and Villanelle have moved on. Nope, I definitely don’t buy that.

Carolyn (Fiona Saw) has to deal with bureaucracy and pretty much answer for the disastrous consequences of the mission in Rome. And it’s not going to be easy, suggesting that Eve’s return in the team seems very unlikely.

Her mother-son relationship with Kenny is also quite strained but they are trying to go on as normal. And that starts with moving to a new home and fish and chips apparently. 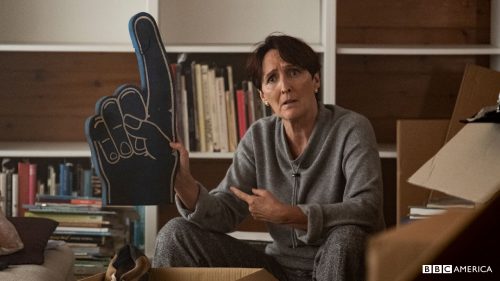 Eve eventually snaps at one of her colleagues in the kitchen and decides to meet with Kenny after all. Maybe to discuss The Twelve? As she goes to his workplace and finds his phone unattended, a body falls off the building behind her. It’s Kenny (and yes, it hurts!).

So who’s done it? Could it be Konstantin (Kim Bodnia)? We saw he had a new job to do.

I don’t know who killed Kenny but whoever that is, you can be sure Eve will look for you and will find you.

Share your comments with @CapeandCastle on this Killing Eve 3×01 Review!