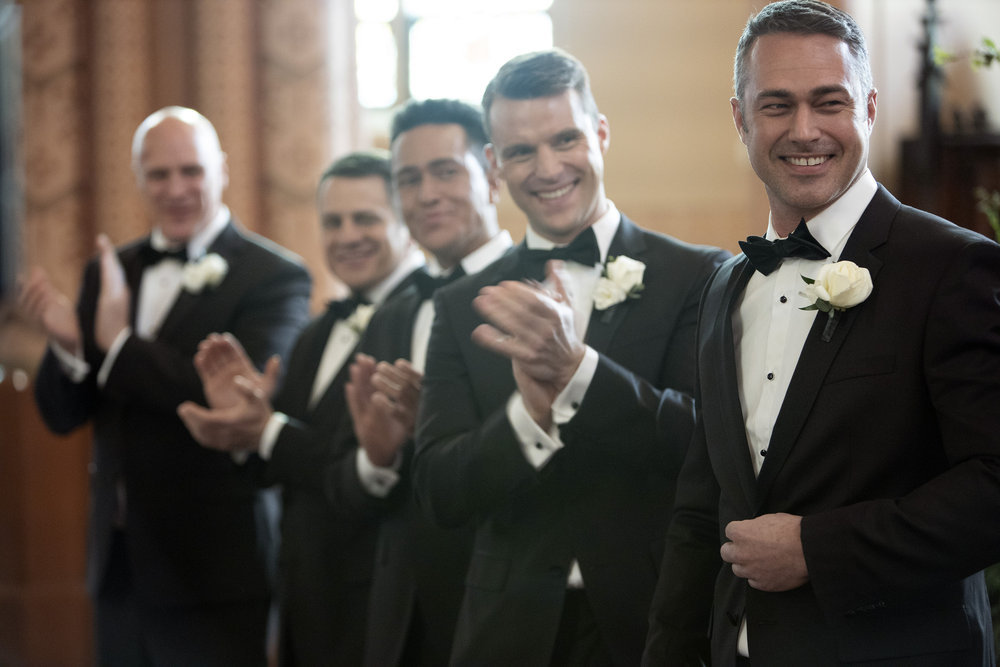 We were so ready to celebrate Joe’s wedding! What we were not prepared for was to see our team being grounded by protestors. Things naturally got violent and went from very bad to worse. We’re still struggling with everything that happened and we’re anxious for what’s going to happen next! Keep reading for our Chicago Fire 8×19 review!

We will never stop loving and talking about Stellaride. These two are amazing together. Even when Severide is being grumpy, we love them. Everything about them. But we do have to wonder when it will be their turn to get married. We know, we know, Stella (Miranda Rae Mayo, Blood & Oil) just moved in with him. Again. But we are ready to see it. Their relationship is so healthy and stable and they just constantly give us the feels. They already act like a married couple, so why not just make it official? We can wait a little longer. But they both better get there soon. 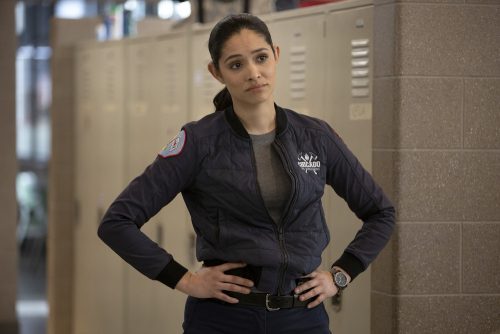 We think Stella and Kelly have both changed a lot over the years and we think it’s because of each other. They have such an impact on one another and we think they don’t even realize the impact they have on those around them. Joe may be close to Kelly, but he and Stella have a special bond as well. We’re so glad that it was her who found Joe in the locker room. Her honesty and understanding were exactly what Joe needed and then Stella turned around and seemed to know that Sylvie needed some of her comfort and understanding too.

We can completely sympathize with why the protesters were upset. We definitely would be as well in their situation. But in what world do they think that preventing another firehouse will in any way solve their problem? Yes, it will get the attention of others but it certainly won’t solve their problem or get their firehouse reopened. Also, we have no idea why they thought Chief Boden was the one that could get their firehouse reopened. We know, he gets shit done, but that expectation was a little ridiculous. He doesn’t make those kinds of calls.

But, Boden probably could make some calls to the right people to help. Trying to lock his team inside and then preventing them from going calls probably wasn’t the way to go about getting his help. Preventing firemen from going out on calls in no way helps your cause of trying to improve response by firemen in your community. And regardless of what they said, they weren’t being too peaceful attempting to lock the firemen inside and taking over the house.

We hate when anything even remotely bad happens to Sylvie. She is so incredible and does everything she can to protect everyone else around her. Finding her birth mother and bonding with her was such a beautiful thing. To see Sylvie get her mom ripped away from her after only just meeting her was the definition of tragic. We’re glad that Sylvie was able to grow up with a great adoptive family. And we’re glad she was able to meet her birth mom. But our hearts still hurt for her and the fact that she lost her so soon after finally meeting her. 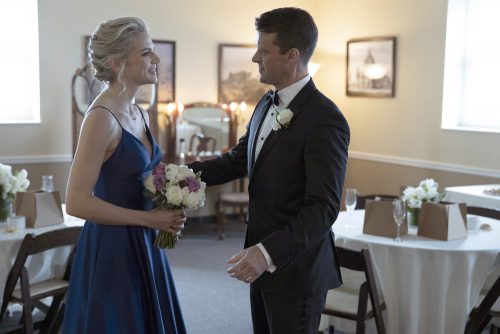 We love that Casey has been there for Sylvie through this entire thing. Their relationship has always been amazing. But we have to admit that we’ve been hoping all season to see things turn romantic. They just go together so well and make such an unstoppable team. Matt really understands Sylvie and vice versa. Sometimes it seems like they can communicate with only a look. It’s been a beautiful thing to see and we truly hope it evolves. Matt has made his intentions of standing next to Sylvie very clear and we couldn’t be happier.

Matt has come so far! And when he started he was always a damn good man and an even better firefighter. But we love watching Casey get fed up with nonsense. We also like to think that he has learned a few things from Severide along the way. Like refusing to take no for an answer and not being afraid to burst through some doors. That’s totally Severide’s influence.

We were so anxious that we weren’t going to be able to see Joe and Chloe get married. We have never been so happy to be wrong before! And the wedding was so satisfying in so many ways! It was everything we imagined and more. Even if we are still sad that Otis couldn’t be there. He will always be in our thoughts and we are sure that the same can be said for the rest of 51. We’re sure Otis will be watching over Joe and Chloe and the rest of the house forever.

What did you think of this episode? Did you agree with the protestors and how they went about things? Do you think that Matt and Sylvie are going to end up together? Will Sylvie end up taking her little sister? Do you think that we have any other weddings on the horizon? Find and follow us on Twitter @capeandcastle to join the Chicago Fire conversation and let us know your thoughts! Be sure to check out our site for more articles on all things Disney, Marvel, Star Wars, and more!