Chris Evans is a Desperate Father in ‘Defending Jacob’

A murder, an investigation, and a family protecting one of its own at all costs. Today, Apple TV+ released the trailer for Defending Jacob, a limited series based on the bestselling novel by William Landay. 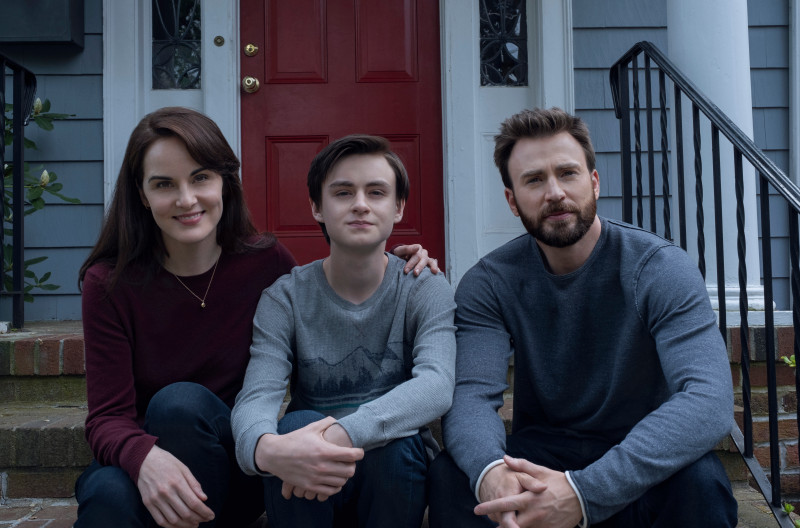 Chris Evans and Michelle Dockery star as parents who are rocked to their core at the revelation that their beloved son, played by Jaeden Martell, has been arrested for the murder of a classmate. The trailer carefully does not give away too much of the plot beyond the basic concept.

Family is unconditional. @ChrisEvans, Michelle Dockery, and @JaedenMartell are the Barbers. Watch the series premiere of #DefendingJacob April 24 on the Apple TV app: https://t.co/srAbFUovRn pic.twitter.com/1D2irspxMF

I read the book a few years ago. It’s a gripping story that grabs ahold of you quickly, draws you in, and holds on until the very end. I’ve been looking forward to seeing how it would be developed as a limited series and this trailer quelled any concerns I may have had. We see the family in both happier times and in turmoil, the shift in their reality and circumstance evident on their faces. Chris Evans, especially, delivers a note-worthy performance as a scared father hellbent on protecting his son.

The series also stars Cherry Jones, Pablo Schreiber, Betty Gabriel, Sakina Jaffrey, and J.K. Simmons. This will be the third time that Evans and Martell have appeared in the same cast. Previously, Martell played a younger version of Evans’ character in Playing it Cool. This past winter, they shared the screen as cousins in Knives Out. Evans also serves as an executive producer for this limited original series from Apple TV+.

It’s no secret that I’m a big fan of Chris Evans. I’ve written about him for Cape & Castle on a few other occasions. I am excited for people to see Chris in such an intense, conflicted, mature role. While we’ve seen him play a parental figure in the past (Gifted), this will be his first role playing a husband and father. One who is scared, angry, protective and desperate. One who possibly walks the line between right and wrong in his laser focus to defend his son.

“Lawyers have boundaries. I don’t. Not anymore.” Chris Evans’ deep, rich voice delivers this ominous line as we see his character appear to wield a weapon and stalk after someone or something in the night. Chris’ most recent role was that of a spoiled, murderous playboy in Knives Out. His next rumored role is the abusive, sadistic dentist in the remake of Little Shop of Horrors. Chris seems to be definitively leaving the virtuous image of Captain America in his past. If this means we get more brooding, gorgeous, intense characters from Chris, I’m all for it.

In addition to the stellar cast mentioned above, Wikipedia claims the following actors will appear in featured roles: Paul Wesley, Nathan Parsons (Once Upon a Time), Leighton Meester (Single Parents), Kat Graham (The Parent Trap, Hannah Montana), and Matt Lanter (Star Wars: The Clone Wars and Star Wars Rebels). It’s unclear if this is merely speculative fan-casting or if it’s true.