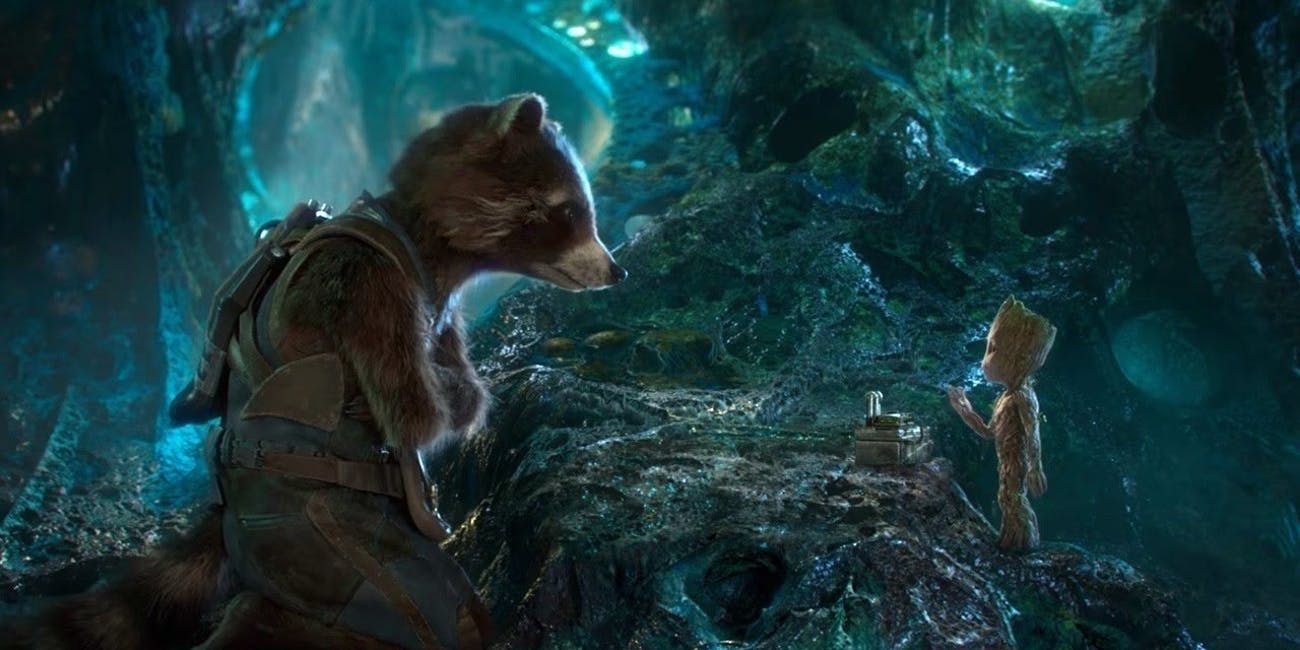 30 Days of Thanks: Why We’re Thankful for Rocket and Groot

After giving our thanks to Star-Lord and Gamora, the time has come to show some gratitude to two other Guardians: Rocket and Groot.

Truth be told, when the first installment of The Guardians of the Galaxy was in the works and that I learned more about the characters, I was not impressed. I thought: “Seriously? A talking raccoon and a CGI tree? That sounds terrible.”

I was sure Marvel was taking a major risk that may not pay off. And look at me now, writing an article celebrating the said talking raccoon and CGI tree. And the very reason I’m doing it is because Rocket and Groot are so much more than the above.

Thankful for the talking raccoon

Rocket is the sassy, grumpy, brazen with a shady weapon fetish member of the Guardians. He’s the co-leader of the team (although Star-Lord is too proud to ever admit it) and often, he’s the brain behind most of their plans. Who broke them out of the prison? Rocket. Who found Yondu and flew across space to save Peter? Rocket. Who helped Thor on his quest to make a weapon to kill Thanos? Rocket.

When you think about it, this furry knee-high to a grasshopper raccoon has saved the day more often than you would expect.

He is the embodiment of the anti-hero (on so many levels), and he certainly isn’t perfect because he doesn’t try to be. He has major flaws but he looks after the people he cares about. And this is what matters.

Yeah, Rocket is your sassy, grumpy, brazen with a shady weapon fetish talking raccoon…that has a heart. I dare you to find another one like him in the whole universe.

Why we’re thankful for the CGI tree

Groot is one of a kind. He managed to get the whole audience to love him by speaking the same sentence over 3 movies. Beat that.

And although we never know what he’s saying, we all understand what he means. It is a universal language that reflects his simple nature yet complex personality.

And we’re thankful for getting to see so many versions of him.

The Guardians 1 Groot owns my heart forever and his selfless sacrifice haunts me to this day.

Baby Groot made the Guardians 2. Period. His cutie pie face, his flawless taste in music and his fierce personality made me wish he’d never grow.

Teen Groot is so important. Sure, he acted all rebellious and aloof for over half of the movie, but the very second he put the console down, he showed everyone how “heroism” is done. Stormbreaker is the freaking awesome weapon that it is because Teen Groot made it so. And this is one more thing to be thankful to him for.

But the part to be the most thankful is, without a doubt, the special bond between Rocket and Groot. It goes deeper than friendship.

It is love. Selfless and noble.

Rocket only cried actual tears once. And they were for Groot.

He found a twig and planted it to bring his best friend back. And then he raised him, looked after Baby Groot and told off Teen Groot as a parent would.

And nobody should ever forget that Groot’s last words to Rocket after the Snap in Avengers: Infinity War.

Rocket and Groot have shown us that love goes beyond appearances and expectations. And who would have thought that a tough raccoon ranger would someday act like a father, and be a great one at that?

The Guardians of the Galaxy movies are all about wild and twisted humor with Space action, but it isn’t the only thing. They explore relationships between aliens and other non-human creatures far more humanely than other based-on-Earth Marvel movies. Star-Lord and Yondu; Gamora and Nebula; and on top of our list, Rocket and Groot.

What are your thoughts on Rocket and Groot? What’s your favorite scene?