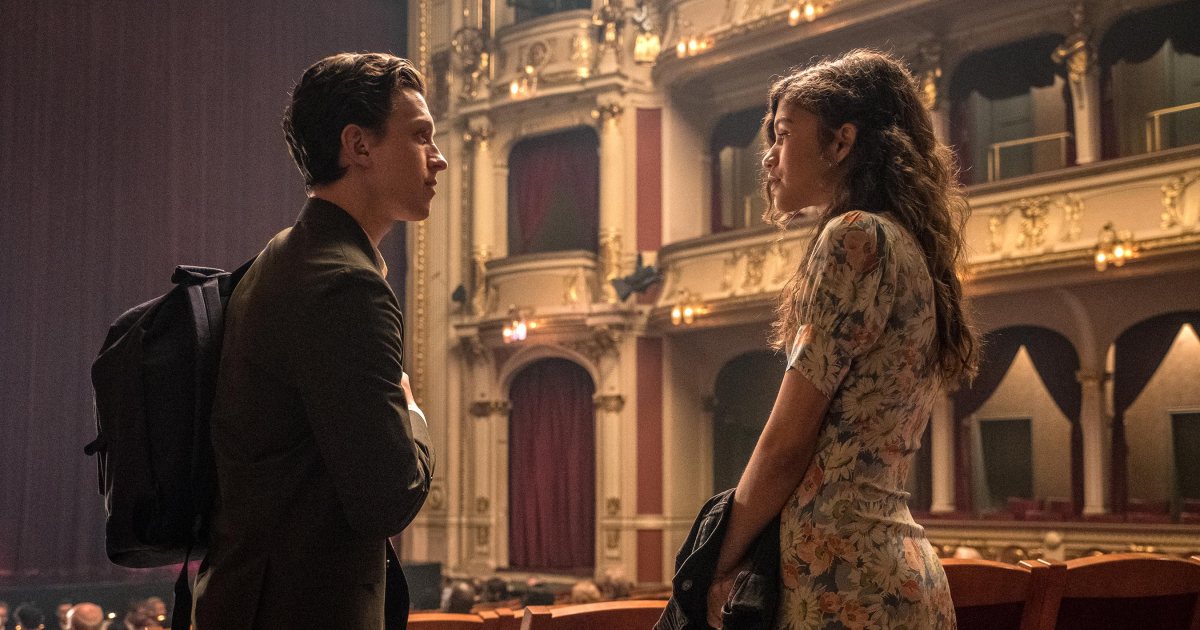 The relationship between Peter Parker (Tom Holland) and Michelle Jones (Zendaya) blooms from a bulb in “Spider-Man: Homecoming”, as they continue to flourish in “Spider-Man: Far From Home”. The two gradually start a budding romance, with long-lasting, attention-grabbing petals that represent friendship and devotion. Part of what makes their blossoming relationship so endearing is the awkward sincerity between the two.

If you’ve seen either film to this unfinished trilogy, you’ve seen how adorable Spideychelle (Spider-Man+Michelle) is! Young and still in awe of the opposite gender, Peter Parker stumbles over conversations with Michelle, yet the chemistry between the two is undeniable. Michelle is more than a match for Peter intellectually and socially. She’s sarcastic, witty, and has a unique personality: a perfect counterpart to Peter.

During the first film “Spider-Man: Homecoming”, Peter and Michelle had a rather strange relationship full of badinage. The two never have many scenes together because at the time the young hero had his eyes set on Liz Allan (Laura Harrier). 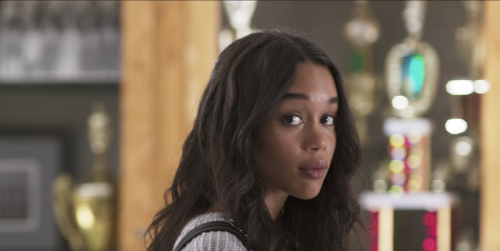 Despite the fact that Peter never really noticed Michelle as anything but a friend, you could tell Michelle was very attentive of Peter. Let’s review some scenes in “Homecoming” that focus on this blooming relationship.

In the scene where Peter tells Ned that he stole Cap’s shield, Michelle is sitting right behind them reading a book. 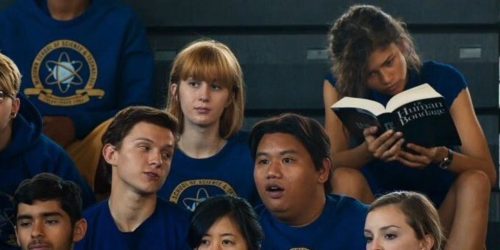 I feel like she was in that shot for a reason. More than likely it’s because they wanted to show us that she sort of sticks close to Peter a lot of the time. She’s trying her best to overcome her emotionally distant nature to become closer with the boy she likes. Right after they show her, the next shot is a camera point of view from her perspective. As if the camera itself was Michelle looking towards Peter, a shot to establish that she was listening.

In her own ways throughout the film we see her be very protective of Peter. In a deleted scene, the school news ask various students who they think Spider-Man is and Michelle responds, “I don’t know who he is. But I have my suspicious.” Choosing not to share that information, she’s being protective of him and his heroics.

During a scene where Peter is changing into his Spidey-Suit in an ally, he decides to carelessly leave his backpack webbed to a wall as he swings into action. His backpack ends up being stolen, as it is never clarified who stole his backpack; I’d like to think Michelle is the one who took it. Peter obviously hadn’t thought of the consequences of leaving his backpack with his name all over the supplies inside. Michelle would have realized someone could find it and figured out his secret identify. So to protect him, she takes the backpack. This theory has its flaws, such as why wouldn’t she return the backpack? Perhaps she was too nervous to explain why she was in the ally in the first place. Either way, its just a little assumption I’d like to think happened behind the scenes.

Towards the end of the film, when Peter gets Happy’s text and goes to meet him in the men’s restroom, she asks him about where he’s going and what he’s hiding, then says, “I don’t care. Bye.” As Peter leaves, the camera pans to Michelle, whose look says it all: she very much cares, and has felt that way all along. The fact that the glance she gave Peter towards the end was so clearly focused on when it did not have to be says a lot on its own.

In the sequel “Spider-Man: Far From Home”, Michelle reflects the normal part of Peter’s life that he still desperately needs and is trying to hold onto throughout the film. Having fun with a girl who is idiosyncratic, weird and has a dark sense of humor is just what he needs.

Throughout “Far From Home”, the balance between Michelle and Peter Parker is almost always even, sometimes tipping in Michelle’s favor simply due to her more stolid nature. This makes Michelle a distinct variation to Peter Parker’s typical love interest, Mary Jane Watson, who had a vain, party girl persona in both the comics and the original “Spider-Man” (2002-2007) trilogy with Kirsten Dunst. Rather than the constant damsel in distress we get from Kristen Dunst, these films go to great lengths to ensure Zendaya’s character isn’t a damsel. Zendaya’s Michelle Jones may share the same initials as Mary Jane, but that’s all they share!

It’s a refreshing love interest we haven’t seen yet with Spider-Man. It feels wrong to refer to her as that, “a love interest”, but my point is they’ve gone a firm step in the right direction, that makes her a breath of fresh air both in her characterization and interpretation of a female character.

During a pivotal scene near the end of “Far From Home”, MJ reveals that she has trouble getting close to people and so she lied before when she said she was only watching Peter because she thought he was Spider-Man. We find out what she means is that she was also watching him for the same reason he was watching her, i.e. she liked him. While it is not explicitly stated it is likely that she worked out he was Spider-Man because she had been watching him so much because she liked him. “Far From Home” makes it clear that this Spider-Man’s girlfriend won’t get a silly crush on an anonymous hero without knowing exactly who is under the mask!

Near the end of the film, MJ receives a necklace of a Black Dahlia that Peter bought for her. Unfortunately during the chaos from the fight in London, the necklace gets broken. While looking at Peter who’s bruised and bloody from battle, she tells him, “I actually like it better broken”. I think what she means by this is, she doesn’t care that things weren’t perfect in Europe. Peter has this whole plan of confessing his feelings while giving her the necklace, which unfortunately did not go as planned. I think she was trying to tell him it doesn’t matter how they end up together, the important thing is that they do. The more hidden meaning beneath that sentence, the part that is for the audience and perhaps is not on the characters’ minds, is that this MJ doesn’t care that Peter is broken. Peter Parker has endured so much tragedy, but she just takes him as he is. She sees him for all that he is, she wants him for everything that he is going to be. She wants Peter Parker, broken bits and all. Their relationship is not going to be easy, things might get broken, but she is in it for the long haul.

Finally, the relationship between the two is real, intense and it’s going to last. MJ’s awareness of Peter’s behavior is already pretty high, but now that they are dating I can tell how tuned in she will be to Peter’s emotional state. She’ll have her very own “Peter Tingle” (PTSD, nightmares, anxiety attacks, world-on-his shoulders syndrome); she’ll know almost immediately and be able to offer the support he needs. Certain characters, written together in certain ways, show this kind of interaction. You take two really strong personalities, make them interact, and you get a really vibrant and dynamic relationship out of it. They offer each other an unconscious promise of unconditional love and security, that is exhilarating to the mind, heart, and soul.