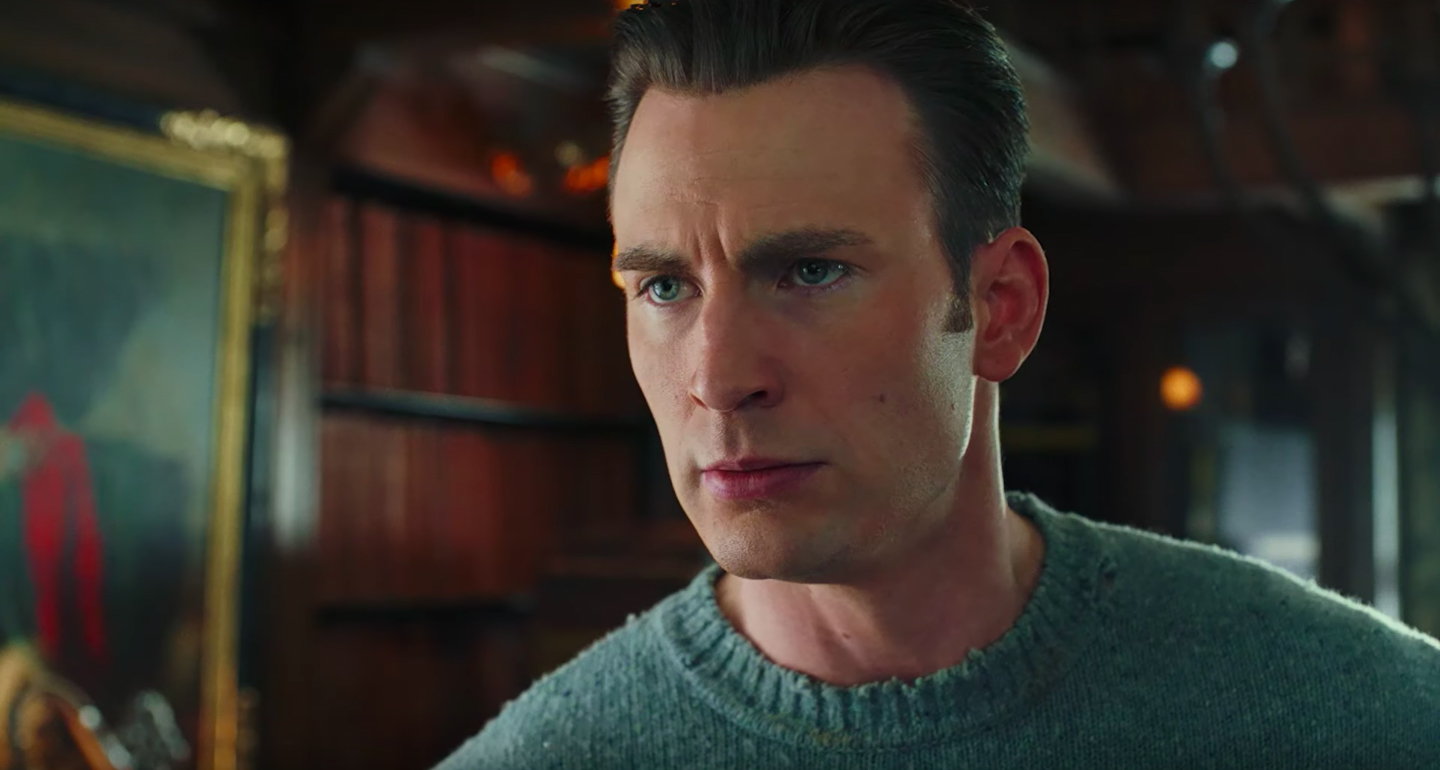 For my first article for “Cape and Castle“, I chose to write about my favorite subject: Chris Evans. Now that he has left Cap behind, I take a look at what comes next for the well-spoken, gorgeous, and frequently bearded actor.

A few weeks ago, fans were finally given a glimpse at the first film role Chris Evans chose to tackle after leaving Captain America behind. In Knives Out, a family patriarch dies under mysterious circumstances following his birthday party. A detective suspects foul play and gathers the family to investigate.

Evans is part of an all-star cast including Daniel Craig, Toni Collette, Jamie Lee Curtis, Michael Shannon, and Christopher Plummer. The movie is written and directed by Rian Johnson, known most recently for helming the latest installment in the Star Wars franchise, The Last Jedi.

Those used to Chris Evans as foul-language averse Steve Rogers were likely taken aback by the vocabulary he flexes in the first trailer for the Whodunnit due to hit theaters on Thanksgiving. It’s clear that whoever cut the trailer together included his profanity-laden tirade for the shock value of hearing America’s golden-boy spit expletives. Those of us familiar with Evans’s non-Marvel roles weren’t quite so scandalized. Even Steve Rogers finally let a few curses fly in Avengers: Endgame.

It’ll be fun to see Chris Evans get to play in a whodunnit murder-mystery. He is a self-professed fan of the genre, tweeting about a classic not long before production on Knives Out began late last year.

NON-MARVEL ROLES DURING THE MARVEL YEARS

Over the past decade, Evans took on a number of other roles between Marvel projects. Each a little different than the last. He leaned into darker, heavier territory with Snowpiercer and Puncture. He went back to romantic comedy with Playing It Cool. He even found time for his directorial debut with 2014’s Before We Go, in which he also starred. One of my personal favorites, Gifted, gave us our first glimpse of Evans in a parental role as a man raising a child prodigy.

Evans will play a parent again in Defending Jacob, a limited television drama series he is currently shooting for Apple TV+. The legal thriller is an adaptation of William Landay’s best-selling novel of the same name. Evans plays a father dealing with the accusation that his 14-year-old son is a murderer. As it’s currently shooting, a release date is unknown.

It’s interesting to note that Defending Jacob is shooting in and around Boston, Massachusetts, as Knives Out also lists Boston as its primary shooting location. Evans is from Boston and still keeps a home in the area. With him recently dropping out of two films — The Devil of All Time, where his role famously was passed to frequent Marvel co-star Sebastian Stan, and Infinite — is it possible that Evans is looking strictly for projects that will keep him close to home?

text WITH A CHARACTER?

Knives Out will hit theaters on Thanksgiving. There will likely be additional trailers and peeks at the movie before its holiday release, but in the meantime Knives Out is using an interesting marketing ploy.

Everyone has a motive. No one has a clue. Text ‘Whodunnit’ to 94200 to see the knives come out. #KnivesOut pic.twitter.com/TmaF6qOk1v

If you text the number listed, you will ostensibly receive random text messages from a character from the movie. I tried it myself and received a few messages the day of sign up, but nothing since. I hope it will become more frequent and/or interactive as the release date approaches. Based on the content of the messages, I suspect that they are supposed to be from Chris’s character, but that might just be wishful thinking on my part.

The only project remaining on Chris’s IMDb filmography page is the movie Jekyll, currently listed as being in pre-production. Very little is known about the movie, including when filming may actually begin.

Instead of film roles, Chris seems to have shifted his current focus to, in his words, a “civics engagement project”. Over the past few months, Chris has been seen in and around Washington, D.C. several times working on a forthcoming website to be called “A Starting Point” that will present both sides of political issues. CNN shared a video of Evans pitching his project to members of Congress. A launch date for the website is unknown. Chris was spotted in D.C. as recently as early June.

When Chris does start lining up film projects again, I personally hope he finds a way to fulfill his destiny as the voice of a Disney character. I’m not picky; he doesn’t even have to be a prince, just an original Disney character in some sort of epic fairy tale. He is open about his love for all things Disney, as am I. There is no one I would rather see (or hear) as a new Disney character. It would bring him one step closer to being a true Disney Legend.

Chris can next be seen in Red Sea Diving Resort on Netflix at the end of July. Check him out in Knives Out in theaters on November 27th.